She was the most photographed woman in the world, and flourished under the spotlight from from shy teenage Sloane in tweed to a symbol of ultimate elegance.

Princess Diana has assumed legendary status as a style icon in the same way as Jackie Kennedy and Audrey Hepburn, and 20 years on from her death in Paris her outfits are still the subject of huge fascination – not to mention column inches.

To mark the anniversary, Melanie Hough, curator of Getty Images Hulton archive has identified 10 of the most iconic images of the late royal, which capture both her sense of style and her character.

Surprisingly, many of the royal’s best style moments don’t involve her most famous outfits, such as her David and Elizabeth Emanuel wedding dress, resplendent with a 25-foot train.

Rather the images have been chosen for the unexpected ways in which Diana proved her power as a style-setter thanks to her knack of picking outfits that were both classic and contemporary, or by injecting a fairytale element into royal occasions.

Charles and Diana in Bangkok, Thailand, 1988

‘Despite the heat, Diana looks effortlessly cool in an outfit that was at the height of fashion while bringing together a medley of influences from times past,’ Melanie explained.

‘The combination of classic and contemporary finds its legacy in the style of today’s royals. There is a compelling dynamic to this image as the couple make an exchange mid-step.’

‘This image of Diana and Charles at the Cannes Film Festival is part-twentieth century royal, part fairytale.

‘With crowds gathered in the sun behind, the Prince and Princess are glamorous and serene, set apart in the shade.

‘Charles is a debonair James Bond while Diana seems to glide towards the camera in her Catherine Walker silk chiffon dress.’ 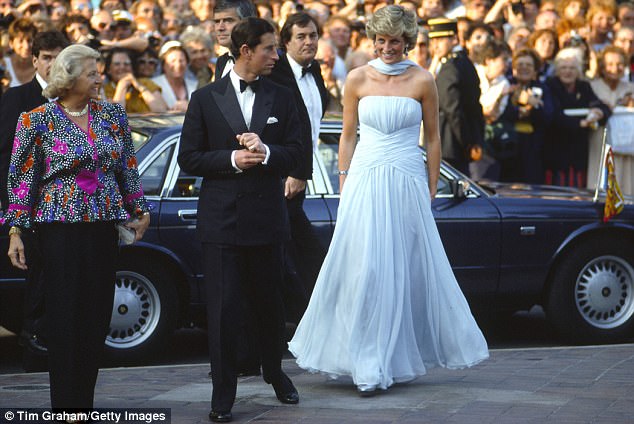 ‘Diana wore this tartan outfit when she attended the Scottish Highlands’ Braemar Games in 1981, an example of her unfaltering ability to both complement and subvert an occasion with her intelligent sense of style.

‘A year into the decade which was to be her making, Diana paired the densely patterned dress with a simple black hat and shoes.

‘It was designed by Caroline Charles, a designer who regularly dressed the Princess.

‘The photographer has pictured the Princess behind a floral display that matches her dress tonally, accentuating the effect of Diana emerging into view.’ 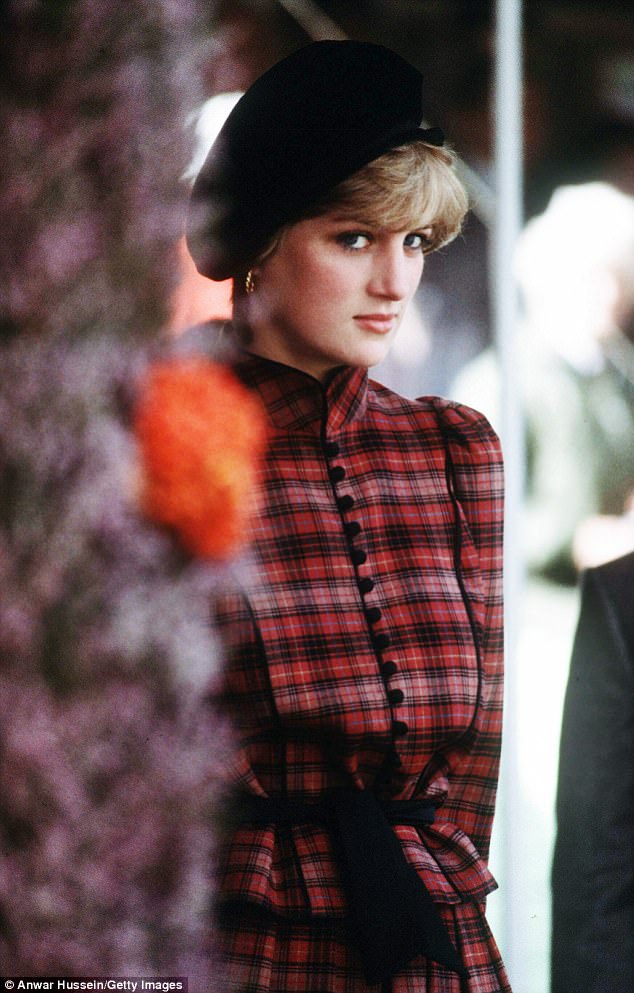 This tartan outfit by Caroline Charles worn to the Braemar Games in 1981, showed Diana’s ability to complement and subvert the style of an occasion

The image of the Princess dancing with John Travolta is a reminder of Diana’s universal charm and the sense of fun that captivated the world.

‘Attending a State Dinner at the White House, she is wearing the most elegant of dresses, designed by Victor Edelstein.

‘The dress was only worn once more by the Princess – for her last ever portrait picture in 1997.’ 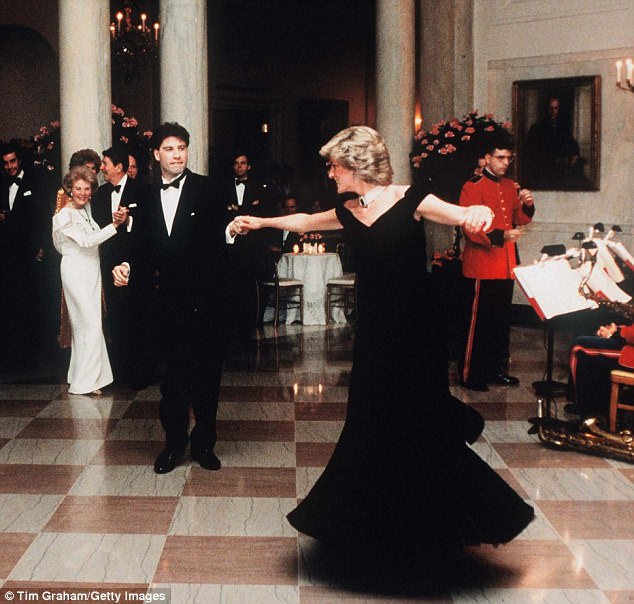 ‘In another stunning design by Catherine Walker, the Princess is seen here attending a Christie’s Party in New York.

‘Paired with gold Jimmy Choos, it is a shorter, more daring outfit than we had previously seen the Princess wearing and reflected her new-found sense of confidence in her role as “the people’s princess”.’ 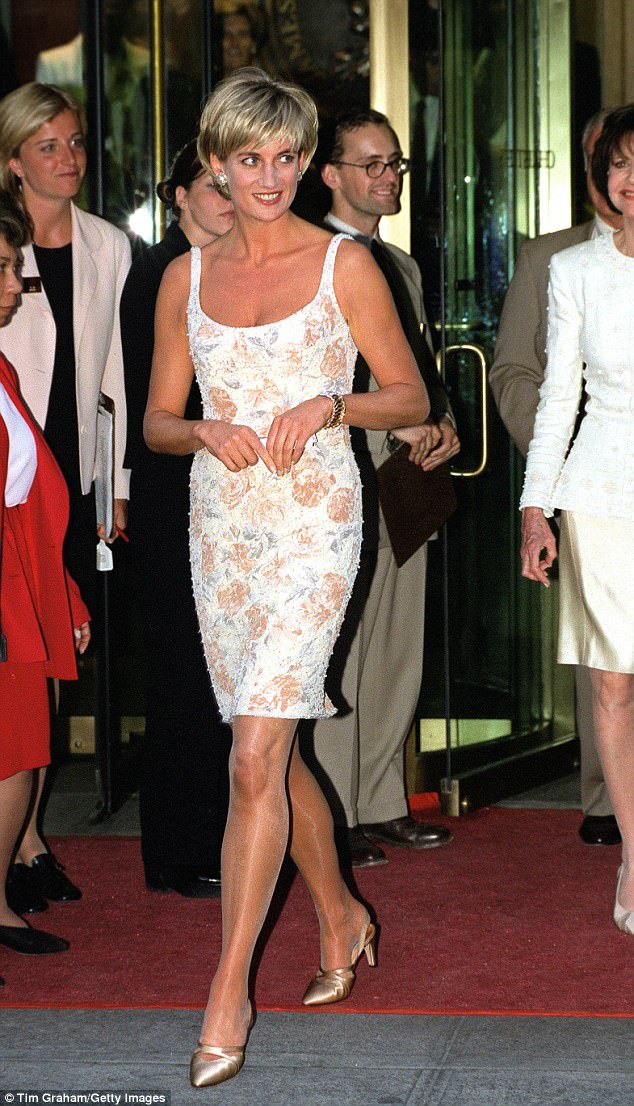 Just two months before she died, Diana showed off her increasing confidence in a sequinned dress by Catherine Walker in New York paired with gold Jimmy Choos

‘The photo was taken during Charles and Diana’s honeymoon in Balmoral, Aberdeen.

‘Staunchly British, the outfit was designed by Bill Pashley especially for the Princess and is softened with cream shoes from The Chelsea Cobbler.

‘Enjoying the rugged landscape of Balmoral, the couple smile for the camera, marrying the traditional style of monarchy with the new.’ 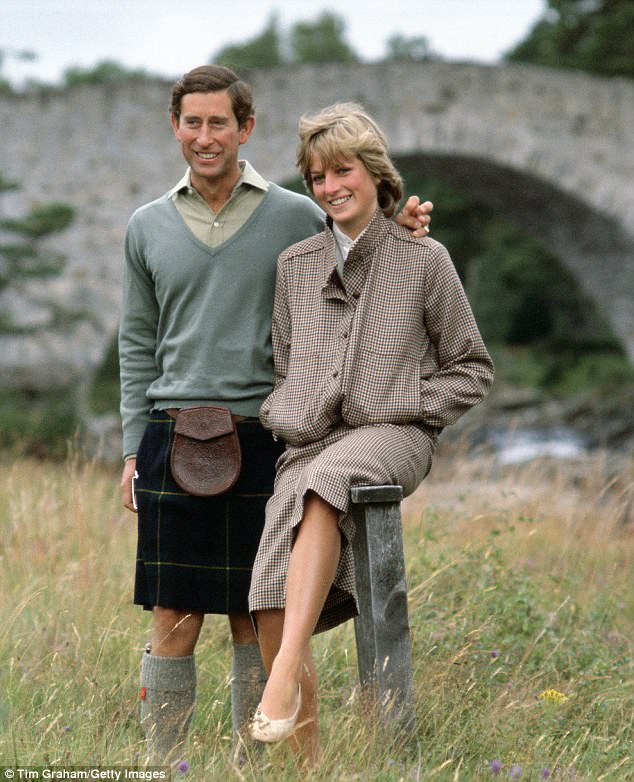 ‘Attending the Daily Star Gold Award to give a speech on her anti-mining campaign, a cause she was deeply passionate about, Diana is wearing a pastel pink, modest suit that brings vintage Jackie Kennedy to mind.

‘The Princess is demure in this image, yet adjusting her handbag it is clear she means business.’ 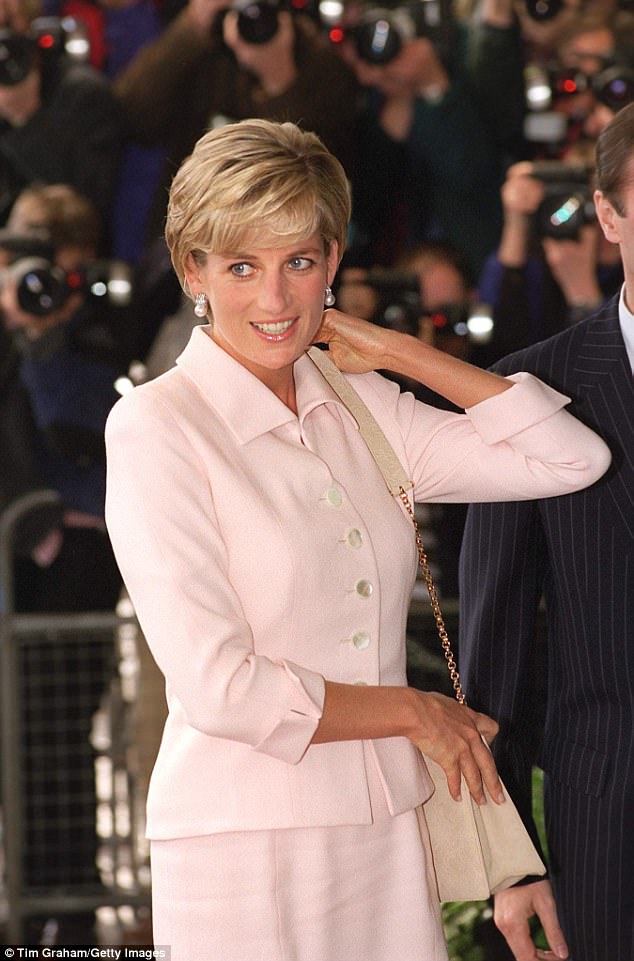 Attending a ceremony at The Savoy Hotel in London to give a speech in landmines, Diana channeled vintage Jackie Kennedy and managed to look both demure and business-like

The Princess wore this white silk strapless dress encrusted with pearls and sequins, with a matching bolero jacket, during a royal tour in 1989 and then shortly afterwards at the British Fashion Awards.

Designed by Catherine Walker and described as the ‘Elvis dress’, this streamlined ensemble’s texture and cut creates real red-carpet impact, responding well to the dazzle of flash bulbs. 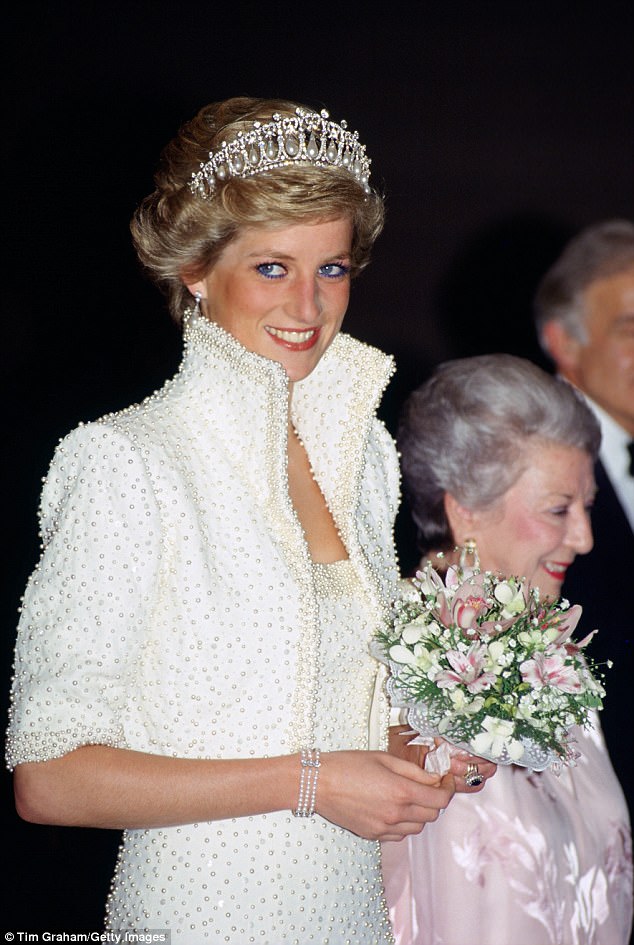 Another wonderful Catherine Walker design, Diana wore this suit with a Philip Somerville hat during her official tour of the Gulf States in 1989.

One senses that the Princess was playful in her wardrobe choices, in this instance experimenting with block colours and strong silhouettes.

Catherine Walker’s designs have since been worn by the Duchess of Cambridge, as well as her mother, Carol Middleton. 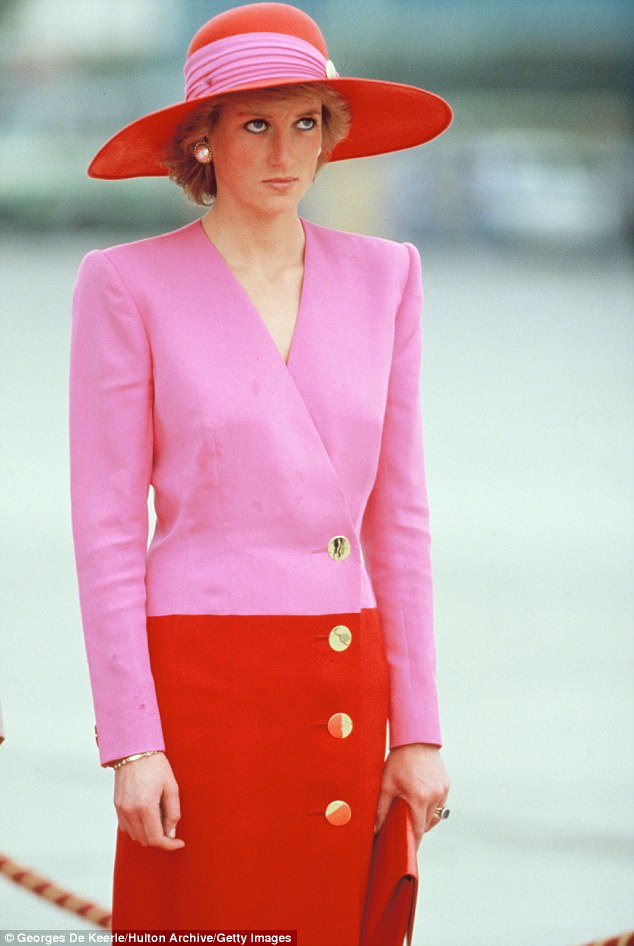 Princess Diana popularised designs by Catherine Walker, who is now favoured by the Duchess of Cambridge and her mother Carole

In another image from Princess Diana’s official tour of the Gulf States, the sidelong glance and smile off-camera creates a most beguiling portrait.

The dazzling white and royal blue with the angular design of her Catherine Walker suit makes the image pop. Looking flawless, the outfit is enlivened by Diana’s pose. 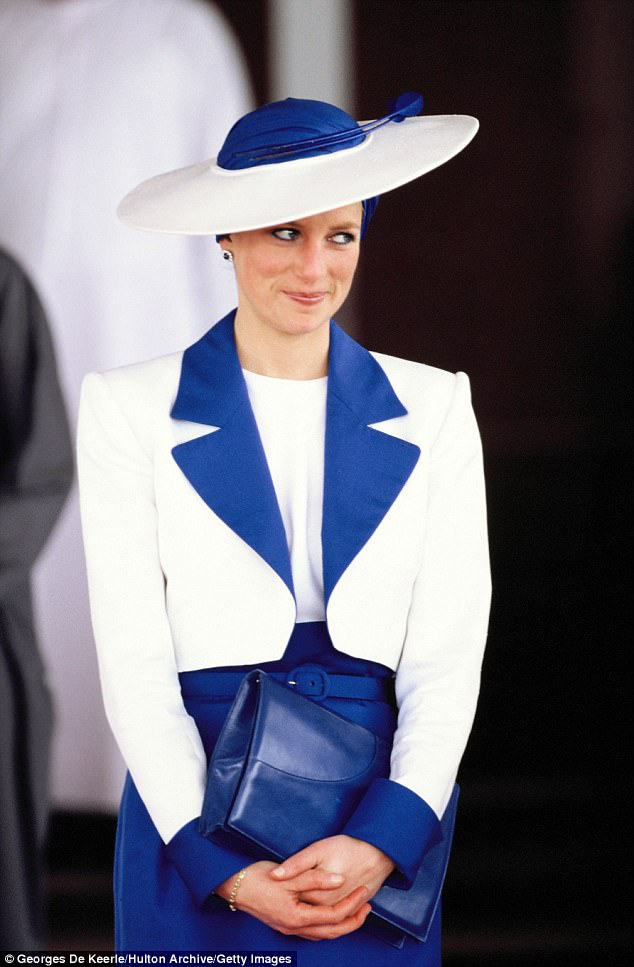