GGG vs Canelo is the fight we have been gagging for

Floyd Mayweather made a statement for boxing when he beat up Conor McGregor and now his father has raised the curtain on another big fight week in Sin City by revealing that his son barely trained before entering the ring against the poster boy for the UFC.

Such was Money Mayweather’s contempt for the boxing skills of The Notorious McGregor that he spent the nights before the pair of them set about making hundreds of millions of dollars playing host in his strip club and munching burgers at four in the morning.

Training for the richest fight of all time apparently amounted to ‘a light run and punching the speed bag.’

‘Imagine if my boy had trained the way he usually done,’ said Mayweather Snr of his son’s tenth round stoppage of McGregor. ‘Would’ve knocked him out inside three rounds. Maybe one. Fifty per cent of my son still whupped his ass.’

He also told the Phillyvoice website that Mayweather did not spar for a month to six weeks prior to earning the easiest $300million in sporting history, partly because at 40 and coming up to his record 50th victory his hands are more brittle than ever.

McGregor is believed to have picked up close to $100m and Mayweather Snr says: ‘He was in it for the pay cheque. Not the glory. I’ve never seen no fighter so happy about being knocked out.’

No such evaluations will pervade the three promotions this week which bring good old fashioned boxing back to centre stage.

Two of those fights take place in England, one of them linked to the main event on the Vegas Strip.

Golovkin versus Alvarez for Triple G’s WBC, WBA, IBF and IBO middleweight titles is the main event for which the boxing fraternity have been gagging for. 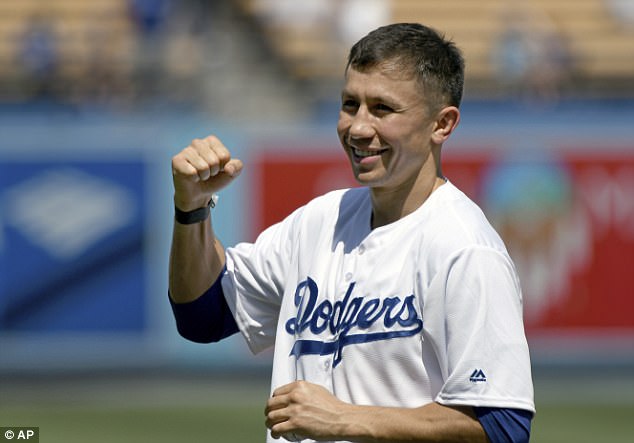 Golovkin will put his  WBC, WBA, IBF and IBO middleweight titles on the line for the main event

Earlier on Saturday evening in the Copper Box at London’s Olympic Park, Billy Joe Saunders will be striving to fend off a challenge from America’s Willie Monroe Jr for the only middleweight belt not on the line in Vegas.

Saunders hopes to use the WBO belt as leverage for meeting the winner between Golovkin and Alvarez in a megafight for the undisputed championship, perhaps in London.

Motivated by the magnitude of that prize, Saunders believes he has worked himself into ‘the best shape ever.’

That has required this standard-bearer for the travelling community to work off surplus life-style poundage, not for the first time, and Monroe argues that his condition may now be more cosmetic than battle ready,

Whoever is right, if Saunders is to lure Triple G or Canelo into the same ring he will need not only to defeat Monroe but put on a more spectacular performance than in his solitary defence, against the lightly regarded Artur Akavov. 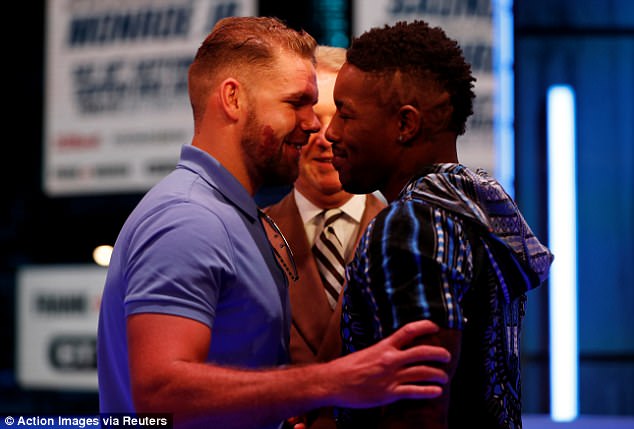 In London, Billy Joe Saunders will take on Willie Monroe Jr of the US for the WBO belt

On the same evening in his home town of Liverpool Callum Smith, the youngest and potentially best of his four boxing brothers, kicks off the super-middleweight version of the new world super series boxing tournament.

Smith meets the also-undefeated Erik Skoglund in the opening quarter-final of his bid for the Muhammad Ali trophy, while also eyeing a potential final against George Groves – or perhaps Chris Eubank Jr – when the WBA super-middleweight world title currently held by Saint George would be at stake. 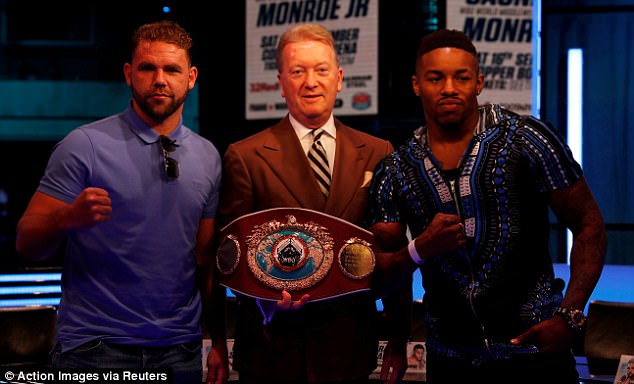 Kessler, the Viking Warrior who fought two epic battles with Carl Froch, is planning a comeback from retirement and after sparring with Skoglund he says: ‘This is a 50-50 fight. Smith is tall and big at the weight but he will have no chance of beating Erik, a very good and very tough boxer, unless he comes to the ring with a perfect game plan.’

This is an important week for boxing, the British fight game included, with Golovkin vs Alvarez bringing it to a late-night climax on Saturday.

Saunders and Smith should crank up the television action with victories, albeit hard-fought.

Saunders v Monroe Jr will be televised live on BoxNation, followed By Golovkin v Alvarez on that network’s new pay-per-view platform at a fee for non-subscribers to BoxNation. Smith v Skoglund will be live on ITV4. All this is on Saturday night.