The suspect, identified only as 32-year-old Erik X, has been charged with aggravated rape and predatory blackmail

A Ghanaian asylum seeker has confessed to killing his brother-in-law before migrating to Germany where he is accused of raping a woman at knife point in front of her boyfriend.

The suspect, identified only as 32-year-old Erik X, has been charged with aggravated rape and predatory blackmail.

The sheer brutality of the rape, which happened in April near the city of Bonn, shocked Germany because of its harrowing details.

Erik X., who is in prison in the Ossendorf district of Cologne awaiting trial, has now confessed to another crime to a psychiatrist.

He has claimed he killed his brother-in-law in a dispute about the inheritance of a family member.

This led to him choosing to migrate to Europe in 2014, according to the psychiatric report.

However the psychiatrist found no mental illnesses which means he can be held fully accountable for the rape, if found guilty.

Erik X got a notice from the German authorities 10 days before the rape of the young woman that he would face deportation to Italy where he had originally entered the Schengen zone as his asylum application had been rejected.

His victims, a 23-year-old and her 26-year-old boyfriend, were camping in a meadow in the Siegaue Nature Reserve just to the north of the city of Bonn, where the River Sieg flows into the Rhine.

He allegedly approached the tent, cut the tarpaulin open using a saw and then asked the couple for money.

Threatening the couple with the tree saw, he allegedly yelled at the woman: ‘Come you b***h. I want to f*** you.’ 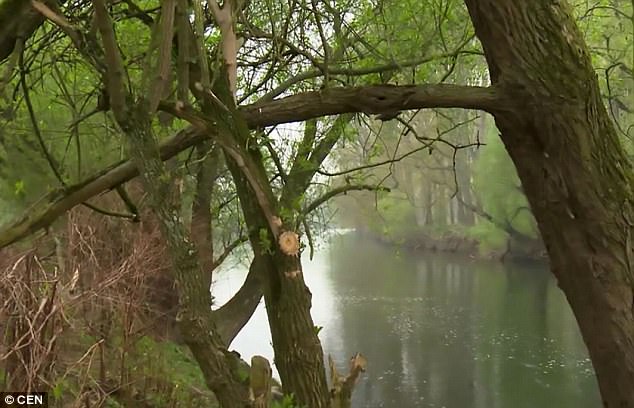 His victims, a 23-year-old and her 26-year-old boyfriend, were camping in a meadow in the Siegaue Nature Reserve just to the north of the city of Bonn, where the River Sieg flows into the Rhine

According to the police investigation, he dragged the blonde woman out of the tent, still threatening the couple with the tree saw.

Her boyfriend later managed to alert the police. The Ghanaian migrant then fled towards the Rhine.

Both of the victims are currently undergoing psychological care and are still heavily traumatised.

On 8th April, Erik X was recognised walking along River Rhine in the Bonn neighbourhood of Beuel.

Although his DNA matched with sperm from the crime scene, he insisted he was not guilty.

So far he has not given any statement about the rape, and his lawyer Martin Moersdorf has also refused to comment on the case.

Moersdorf said: ‘We discussed the case, discussed the evidence, but at the present time I advised my client not to comment on the allegation.’

He also refused to comment about the psychiatric report and the confession of the murder of a family member in Ghana.

The trial of Erik X is set to start on September 25.