Ghislaine Maxwell pleads not guilty as she fights for $5M bail

Ghislaine Maxwell has pleaded not guilty to the sex trafficking charges brought against her as she appeared in court via video today to learn whether a judge will grant her bail.

Maxwell is accused of grooming girls as young as 14 years old for Epstein to abuse between 1994 and 1997, a period when she was his girlfriend.

The British socialite was dressed in a brown shirt on Tuesday afternoon, with her normally short hair in a bun, as she waived her right to be physically present.

Her legal team had offered a $5 million bond co-signed by two of her sisters and backed up more than $3.75 million in property in the UK.

The 58-year-old would be confined to a home in the New York area, surrender all her travel documents and be subject to GPS monitoring.

She faces up to 35 years in prison if found guilty of the charges, as prosecutors argue that along with her three passports, connections to some of the world’s most powerful people and her own fortune – Maxwell has every incentive to try and flee.

New York prosecutors said Maxwell was ‘skilled at living in hiding’ and should be denied bail.

She is currently being held in the fortress-like Metropolitan Detention Center in Brooklyn where she is wearing paper clothes to ensure she doesn’t kill herself. 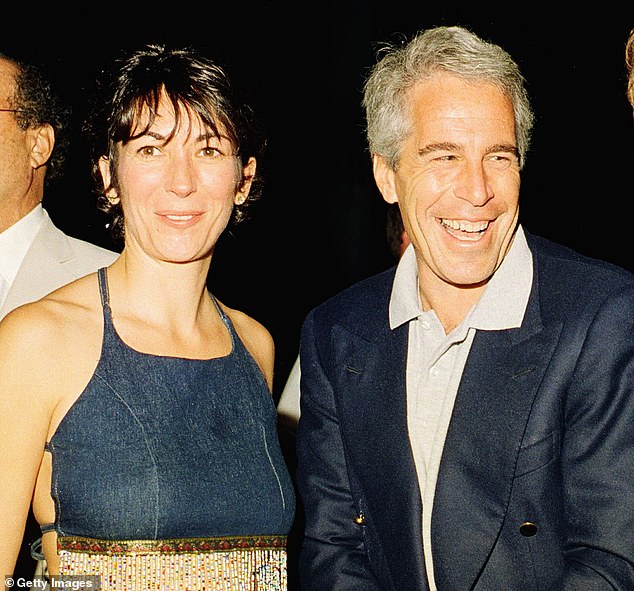 Her appearance on Tuesday came as it was revealed on Monday she had refused to open the front door to the FBI when they raided her $1 million home and fled to another room in the house, according to prosecutors. The 58-year-old ran to another room and was seen ‘quickly shutting a door behind her’

Maxwell is being closely watched as the Department of Justice wants to ensure she does not kill herself like her former boyfriend Jeffrey Epstein, who hanged himself last August while awaiting trial on sex trafficking charges.

Her Tuesday appearance came as it was revealed on Monday she had refused to open the front door to the FBI when they raided her $1 million home and fled to another room in the house, ‘quickly shutting a door behind her’, according to prosecutors.

Officials said her conduct during the 8.30am raid on July 2nd at the property called ‘Tuckedaway’ in the rural town of Bradford, New Hampshire was ‘troubling’. 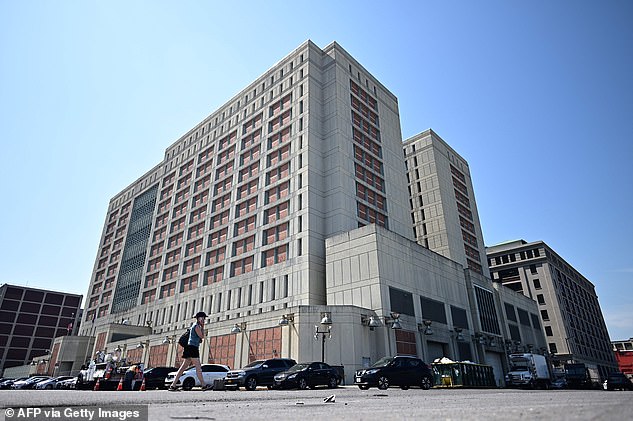 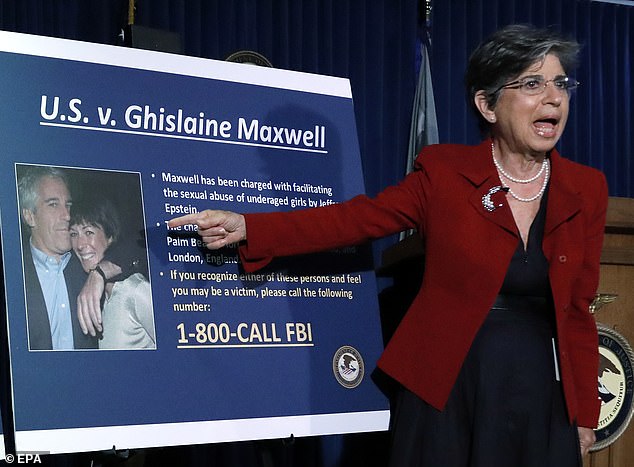 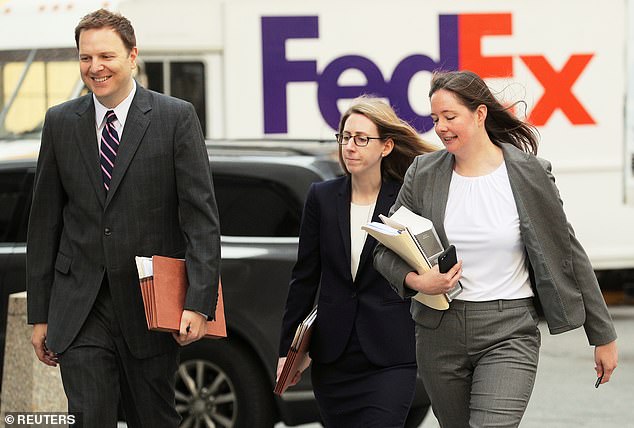 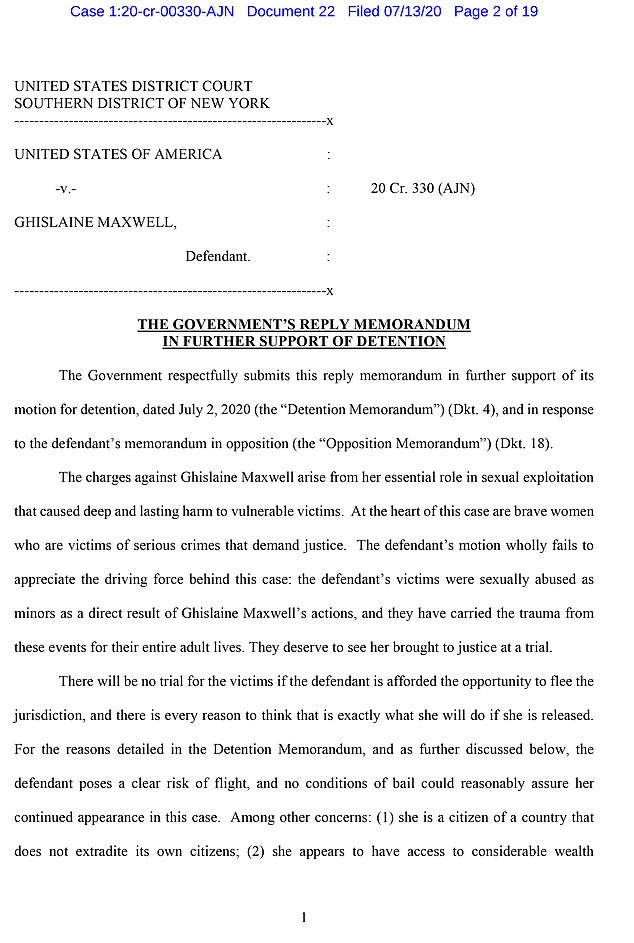 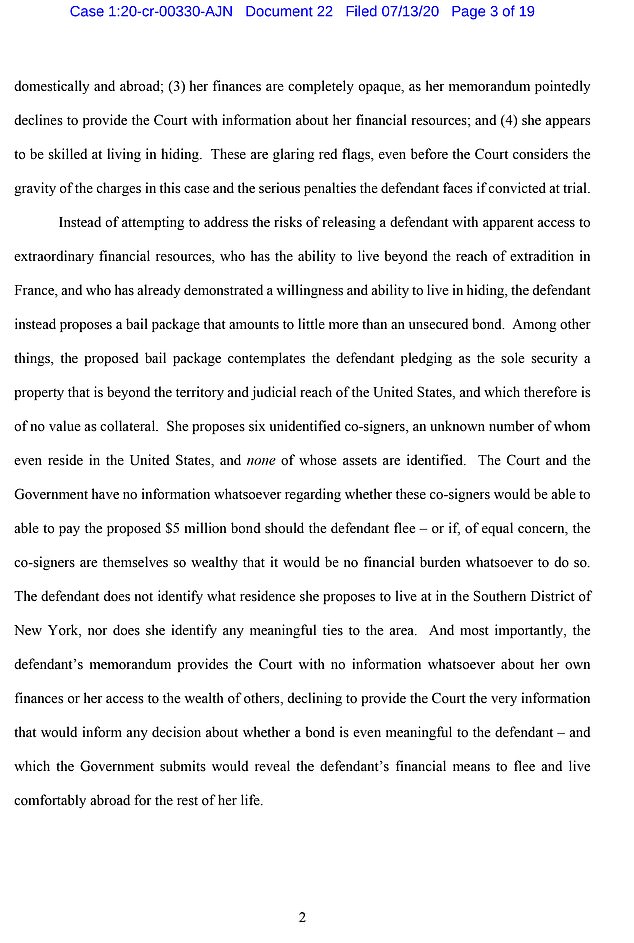 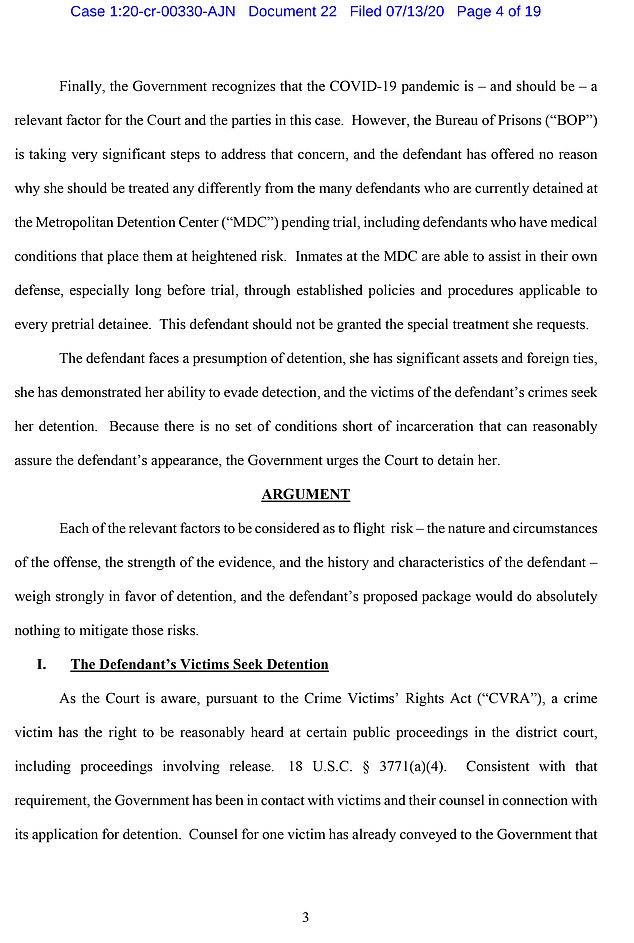 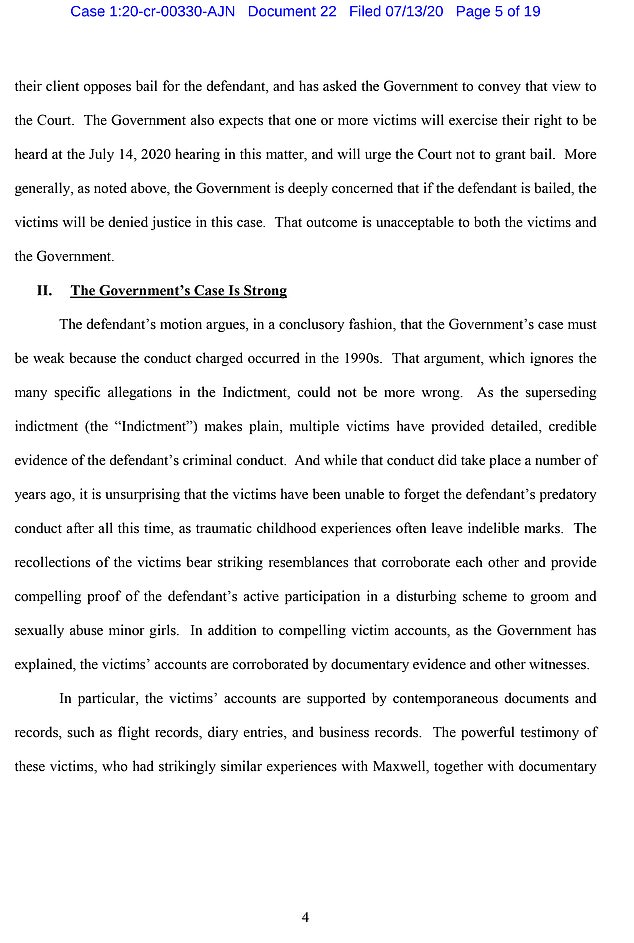 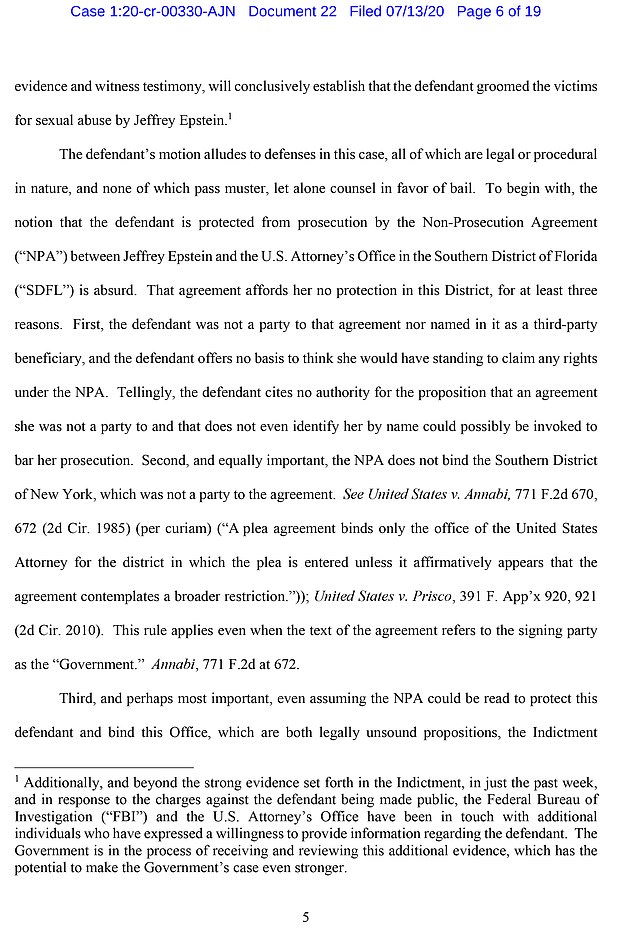 In their filings to the court Maxwell’s lawyers had argued that she is at increased risk of catching the coronavirus whilst in prison. So far there have only been five cases and no deaths at the prison.

In a 19-page document prosecutors from the Southern District of New York dismissed her offer of a $5 million bail package backed up by $3.75 million in UK properties as ‘little more than an unsecured bond’.

It was not enough that she be subjected to 24 hour monitoring and remain under house arrest because she has ‘not only the motive to flee, but the means to do so swiftly and effectively’.

The case against her is ‘strong’ and multiple victims have provided ‘detailed, credible evidence of the defendant’s criminal conduct’ – with more women coming forward in the past week.

The victims have made clear they want Maxwell remanded in custody and say they were ‘directly abused as a result of Ghislaine Maxwell’s actions’.

The document states: ‘While that conduct did take place a number of years ago, it is unsurprising that the victims have been unable to forget the defendant’s predatory conduct after all this time, as traumatic childhood experiences often leave indelible marks.

‘The recollections of the victims bear striking resemblances that corroborate each other and provide compelling proof of the defendant’s active participation in a disturbing scheme to groom and sexually abuse minor girls’. 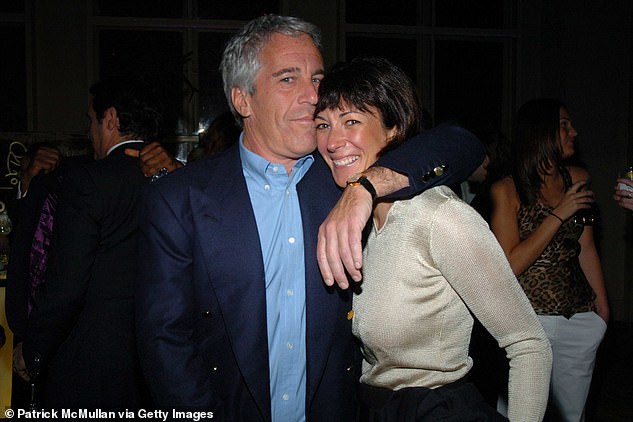 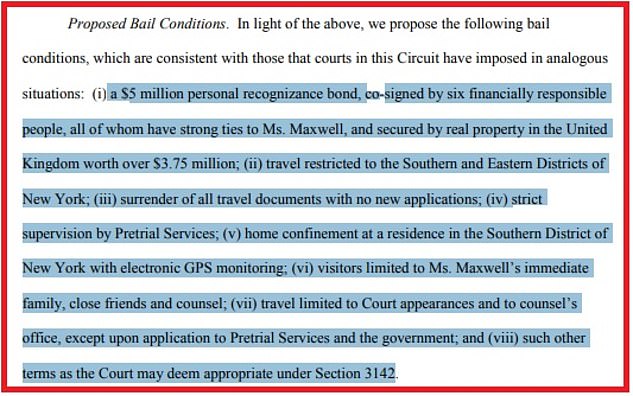 The prosecutors said that it was ‘curious’ that Maxwell claimed to have access to millions of dollars had not offered ‘a single dime’ as collateral for her bond.

They claimed that Maxwell’s finances were ‘completely opaque’ and she had not even indicated which properties she would use for her bond.

Some of the co-signers are ‘themselves so wealthy that it would be no financial burden whatsoever’ if they lost their $5 million by Maxwell skipping bail, the document states.

Maxwell was arrested on July 2 at her $1 million home called ‘Tuckedaway’ in the rural town of Bradford, New Hampshire.