Fleets of tanks lined up among a pool of military trucks. Fatigues hung from clothing lines, airplanes waited to propel into action at the edge of an airfield while cannons and crates of munitions stacked high waited to be loaded onto camouflaged jeeps. Radio signals picked up by the Axis Power intelligence community confirmed what Nazi reconnaissance planes saw while flying overhead: the United States Army’s 23rd Headquarters Special Troops was a robust, thriving, battalion of 30,000 men ready for action. What the Nazis didn’t know is that they were being duped.

The tanks, airplanes, munitions and jeeps were in fact large-scale inflatable decoys as part of an elaborate ruse to deceive enemy forces. This top secret mission and the 1,100 men recruited to stage the unique mission became known as the Ghost Army.

The unit was comprised of actors, artists, architects and sound specialists that were handpicked for their skill and ingenuity in an effort to mislead and befuddle the Germans. They mastered the art of illusion, using life-size inflatable tanks and planes combined with slapdash, wooden structures meant to look like military installations from above.

Their goal was to draw the Germans away from actual Allied troops and trick Hitler’s army into believing that Americans were amassing a major military operation.

Soldiers in the  United States Army’s 23rd Headquarters Special Troops, also known as the ‘Ghost Army’ stage a fake military operation with a life-size inflatable tank as part of an elaborate mission to deceive German reconnaissance planes and draw them away from the actual Allied troops 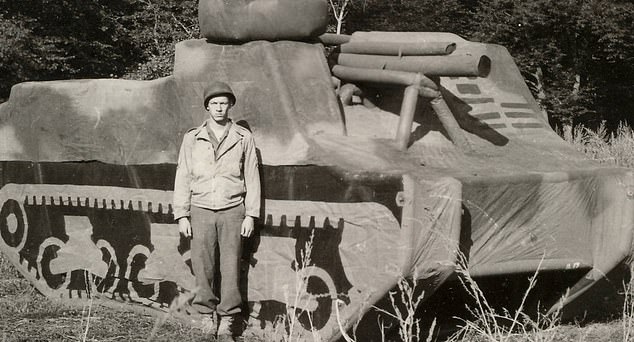 1,100 artists, actors, architects and sound specialists were recruited to the covert operation that what would end  up being largest deception operation in military history, hundreds of fake rubber, tanks similar to the one pictured  were created during the mission 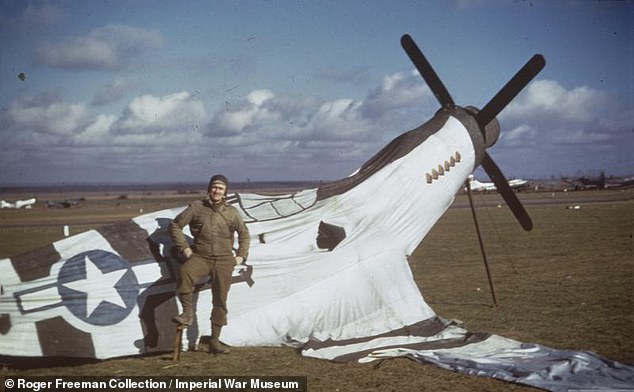 Along with fake tanks and weapons, the artists also forged P-51 Mustang airplanes that lined up against fake air-fields 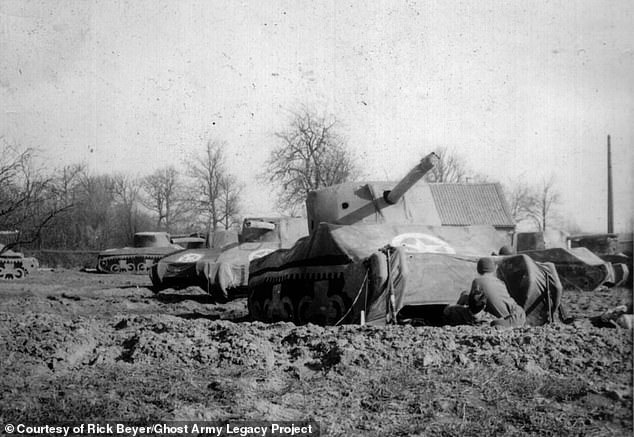 The bogus decoy tanks and airplanes could be inflated in mere minutes with entire bases and airfields set up and dismantled in just a few hours, effectively summoning a battalion of 30,000 men out of thin air 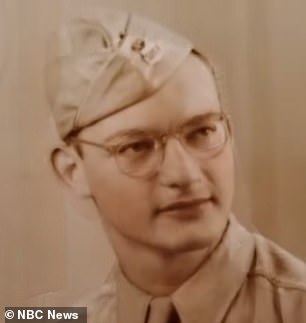 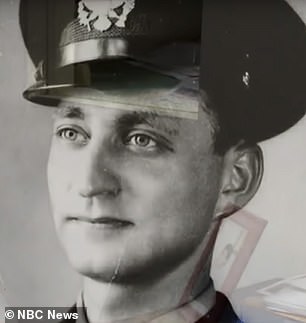 Bernie Bluestein (left) was 19-years-old when he responded an art course sponsored by the Army but he wasn’t explained what type of unit he would be joining. The mission remained classified until 1996.  Bluestein, now 95 is still a prolific painter. Gilbert Seltzer (right) was a young architect when he joined the Ghost Army as an officer. ‘If we saved even one life, I’m very proud of that,’ he said to NBC. Seltzer, now 103-years-old still works in his field

The hoax worked marvelously, it is estimated that they saved 15,000 to 30,000 lives. What the Trojan Horse was to the Greek Army, the 23rd Headquarters Special Troops was to the Allied Forces with their rubber tanks, planes, spoof radio broadcasts and costumes.

Bernie Bluestein was a 19-year-old art student when he responded to an Army sponsored art course post that advertised for a new type of unit. He said to Herald & Review in 2018, ‘They didn’t explain what it was. It was a new kind of unit, and they were looking for artists. And they said it wasn’t going to be any sort of infantry-type fighting.’

Bluestein passed the course and was taken to basic training in Maryland where he was taught to perfect techniques in creating fake tanks, aircraft and dummy structures using basic materials to fool enemies by air.

The bogus tanks and airplanes could be inflated in mere minutes with entire bases and airfields set up and dismantled in just a few hours. The unit mostly worked at night, under the cloak of darkness, they used bulldozers to create false tank treads in the dirt around the rubber weapons of war and painted the proper divisional insignia on all their prop vehicles.

Gilbert Seltzer, now 104-years-old was a young architect when he was recruited to join the Ghost Army. He recalls to Kelly Cobiella of NBC, ‘We had one incident where two Frenchmen saw a tank being lifted by two men and moved and they turned to me and said: ‘how could two men lift a tank?’ And I said you know the Americans are very strong!’ 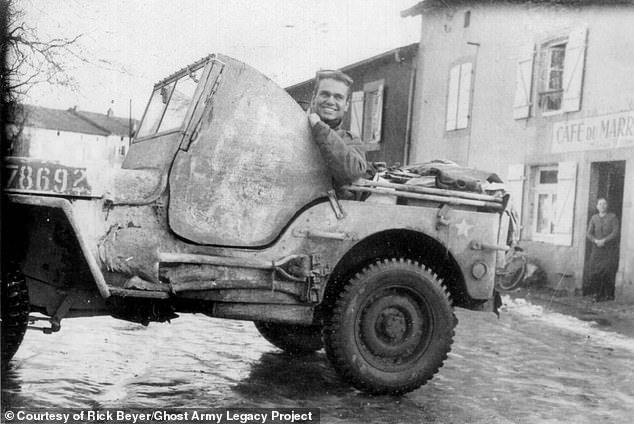 Fashion Designer, Bill Blass (pictured in jeep) along  with modern painter Ellsworth Kelly and wildlife artist Arthur Singer were among the 1,100 men that served in the Ghost Army unit 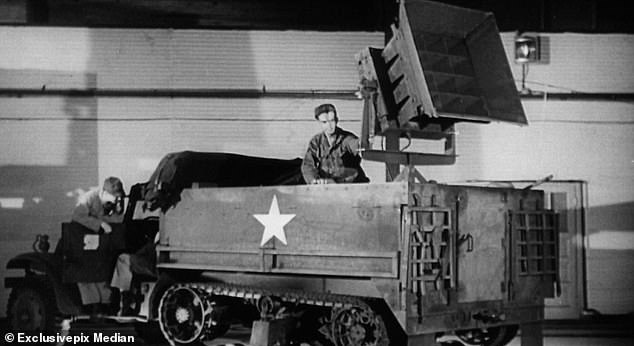 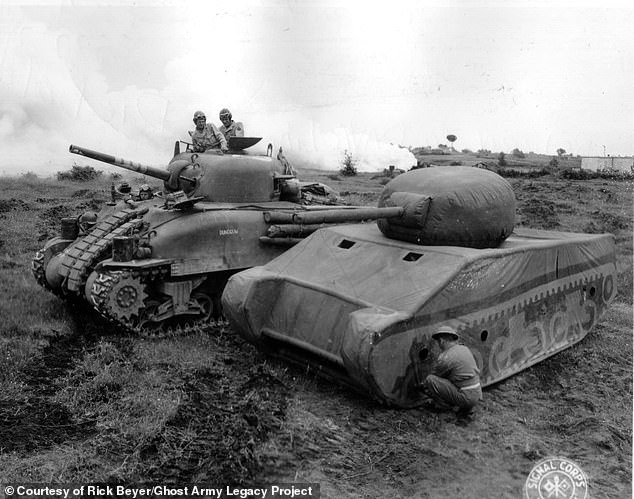 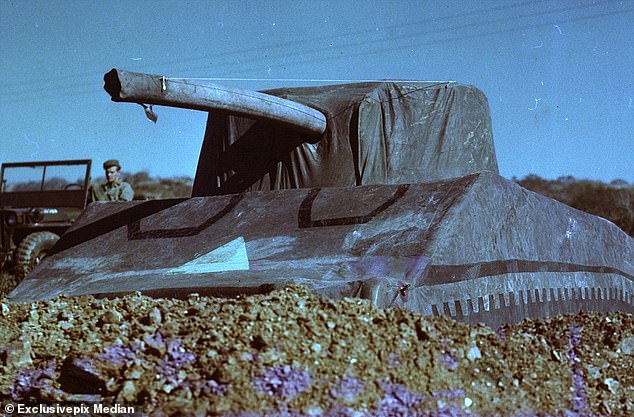 During the daytime, the mobile tactical unit would use classic elements of theater: fake military police would stand at important cross roads conducting checkpoints while staff officers conspicuously walked through small villages knowing that enemy agents were likely to see them. Military trucks would run convoy loops with two soldiers perched on the rear seats in order to give off the false appearance that an entire infantry was sitting out of sight under the canvas covered flatbed.

No stone was left unturned, the Ghost Army added to their deception by broadcasting a mix of pre-recorded military sounds on 500- pound speakers. The recordings were done during military exercises at Ft. Knox and it included hours of gunshot sounds, rumbling tank engine noise and artillery practice that could be mixed by a specialist depending on the scenario they were trying to achieve. With powerful amplifiers, these sounds could be heard up to 15-miles away.

To make the con even more convincing, members of the 23rd also employed a crew of radio operators to send false intelligence messages over airwaves, learning to impersonate the individual Morse Code entry patterns of the radio operators from the units they were mimicking.

Within a few hours the team could create the impression there were dozens of military machines operating in an area. They would use bulldozers to create false tank treads and abandoned wooden structures meant to look like military ammunition storage houses from above 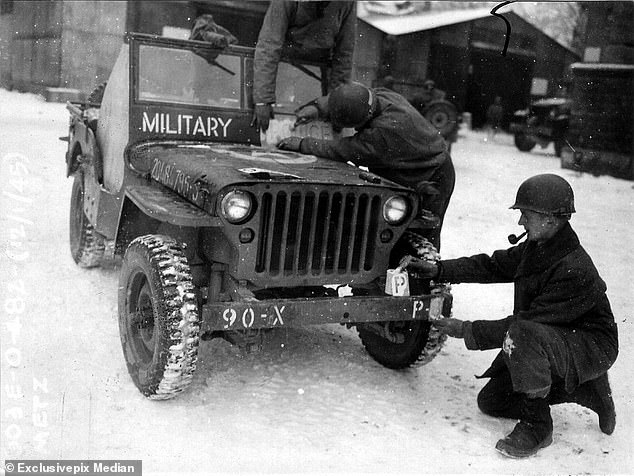 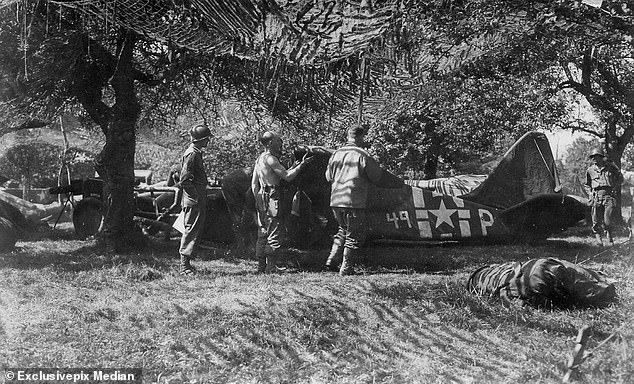 A group of men are pictured inflating a dummy L-5 spotter plane. These decoys were were extremely convincing at long range, but a closer look would reveal that most were made of with creative painting, rubber and wood 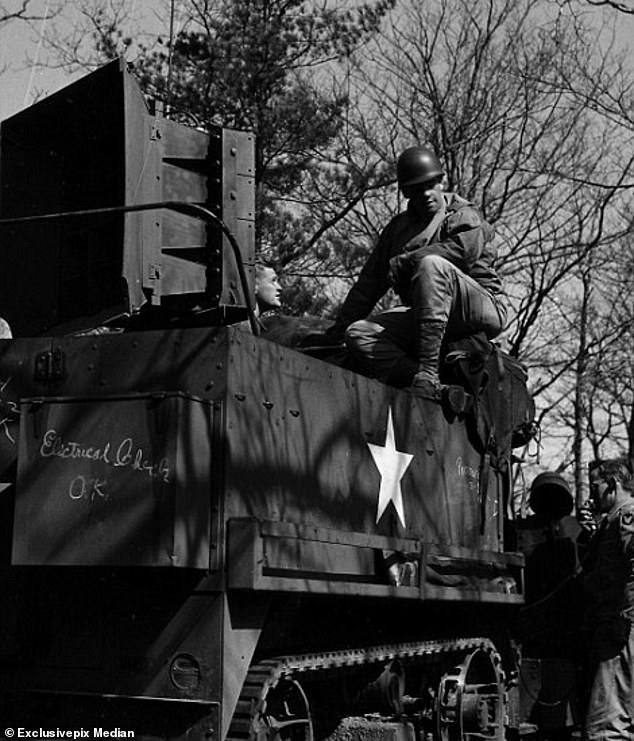 The recordings were done during military exercises at Ft. Knox and it included hours of gunshot sounds, rumbling tank engine noise and artillery practice that could be mixed by a specialist depending on the scenario they were trying to achieve. With powerful amplifiers (pictured on top of tank) these sounds could be heard up to 15-miles away

This mobile tactical, deception unit could move their fake equipment around the country in a mere matter of hours; effectively assembling an entire battalion thrice their size out of thin air. ‘General Eisenhower… always felt like he was suffering a manpower shortage. The Ghost Army was kind of a little stopgap for that. If you didn’t have enough troops to send to hold a certain part of the line, maybe you could send the Ghost Army, and they could hold it until the real troops got there,’ said Rick Beyer, director of the PBS documentary, ‘The Ghost Army’ to New Hampshire Public Radio.

Germans were none the wiser. The Ghost Army orchestrated 21 wartime deceptions between 1944 and 1945. They began their mission in Normandy just two weeks after D-Day and ended in the Rhine River Valley.  ‘If we saved even one life, I’m very proud of that,’ said Gilbert Seltzer to NBC’s Kelly Cobiella.

Soldiers in the little known Ghost Army were outfitted with only one rifle for protection while positioned perilously close to German troops after luring them in. Miraculously there were only three casualties for the entire unit, a result of German shelling the group sustained. It was ‘a dangerous game of make-believe,’ said Beyer in the News Tribune. 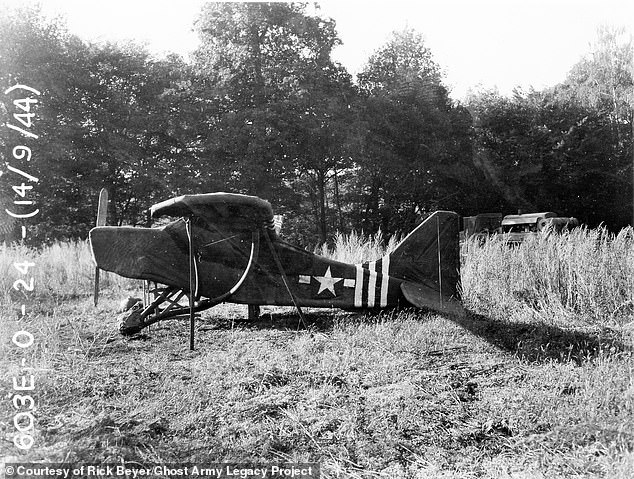 A rubber decoy plane sits in a field, in addition to creating an arsenal of false munitions; they also put on spoof ‘shows’ throughout the small villages of France, purposely disseminating wrong information for enemy spies to hear 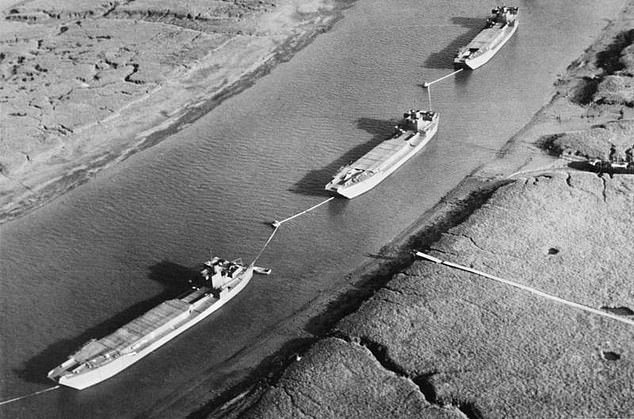 One of the Ghost Army’s greatest victories was at the Rhine River Valley where they distracted German troops further up the Rhine River with massive inflatable aircraft carrier ships. This allowed Allied Forces to successfully cross the river safely while enemy attention was focused elsewhere on the decoys 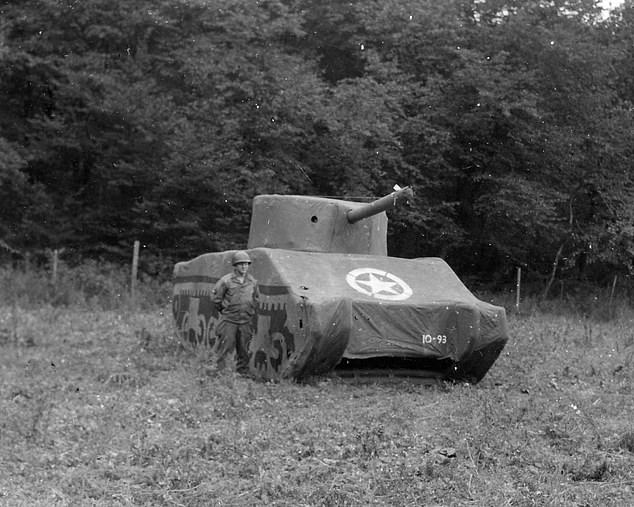 A Ghost Army soldier stands next to an inflatable M4 Sherman tank. The unit ended up staging 21 wartime deceptions between 1944 and 1945 and it is estimated that they saved between 15,000 to 30,000 lives 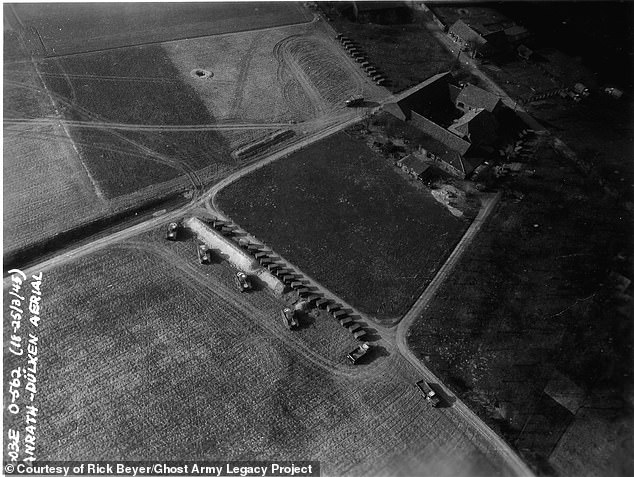 From afar, the Ghost Army’s large scale masquerade was very convincing, here is an aerial image of the inflatable decoy trucks and tanks which is what German reconnaissance planes gathering intelligence would have seen

The Ghost Army operated in complete obscurity. ‘When I got back, we were told to keep it a secret. They didn’t want anybody to know. They didn’t want the Russians to find out that we … pulled this trick on the Germans,’ said Bluestein to Herald & Review.  It wasn’t until 1996 when the US military declassified information on the covert operation. ‘When I wrote home, (Army officials) deleted anything that indicated where we were, or what we were doing or anything. Nobody knew about this: my parents, my friends, nobody knew about what I did, or where I was,’ said Bluestein to Herald & Review.

According to some accounts, the idea for America’s ‘Ghost Army’ can be attributed to Hollywood actor,  Douglas Fairbanks; who allegedly lobbied Naval brass while he was serving in the United States Naval Reserve. He was impressed by the elaborate disinformation campaign launched by the British in preparation for the  D-Day landing. But most historians agree that Ghost Army was a strategic decision made by military generals as an offshoot inspired by the D-Day deception campaign known as ‘Operation Quicksilver.’

After spending 10 years researching the topic, Rick Beyer has become an expert on the Ghost Army operation. He’s written two books and directed one documentary on these unsung heroes of WWII. ‘They weren’t textbook heroes, but they served with ingenuity and valor,’ said Beyer to News Tribune.  As of April 2019, Beyer’s book has been optioned by Ben Affleck who will direct and star in a move about the Ghost Army. Finally it seems, the the group of 1,100 men who so skillfully put their theatrical skills to use during World War II, will finally get their debut on the silver screen.