What is THAT? ‘Ghost bird’ spooks woman when she spots the rare creature sitting on a fence post soaking up the sun

This is the moment a bizarre-looking rare bird gave a woman a fright when she stumbled upon it sitting on a wooden post in Colombia.

The unnamed woman initially thought the bird was part of the post, before realising it was an elusive great potoo, or Ghost Bird.

Using its expert camouflage skills, the bird stands perfectly still on top of a fence post as the woman records the sighting, moving only a few times to reveal its enormous mouth. 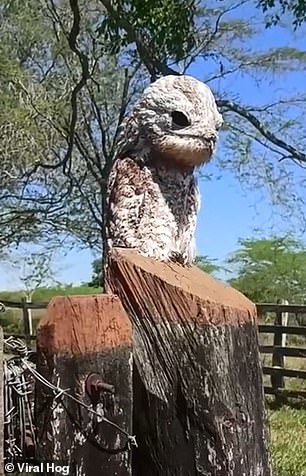 A woman spotted what she thought to be a stick which turned out to be a rare great potoo in Chibolo, Magdalena, Colombia

As the woman, and what sounds like a young child, begin making noises at the bird it soon breaks its cover, opening its eyes before flashing its sizable mouth.

The bizarre-looking creature, known for its ghostly call, remains perched in the same position and appears to scare the woman and child.

When it reveals its odd-sized mouth the woman can be heard shouting, fearful of the bird which she had never seen at the farm before.

She said: ‘The first time I saw him I thought it was a stick but he moved and I approached him.

‘The bird opened its eyes and mouth and scared me a lot but being so strange I decided to take pictures and record videos.

‘When I got closer I raised my hand, and he opened his mouth in reply.’ 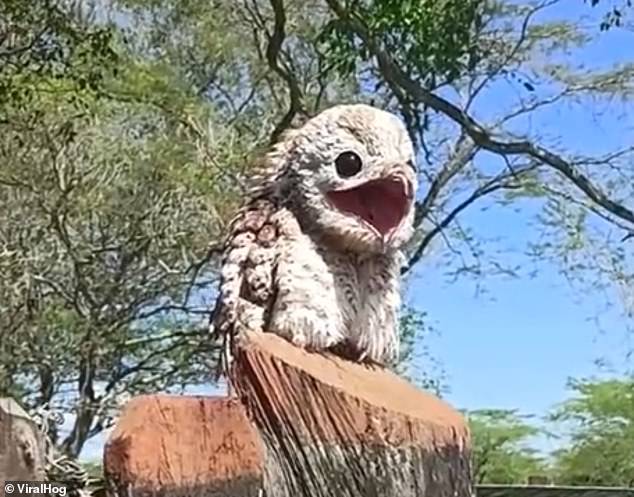 When she and the child approached the bird and made noises at it, it opened opened its eyes and also revealed its enormous mouth

She explained she had visited the farm at least five times before the sighting in December and never seen the creature, but neighbours had heard its calls.

The species of bird has not been seen at the farm for more than 15 years.

The potoo is a nocturnal species that lives in the Southern Hemisphere and uses camouflage to hide from its predators.

It has eyes that take up much of its skull, giving it excellent night vision, while slits in the eyelids help it to sense the movement of predators even while asleep.

They typically rest on broken tree branches or wooden fence posts and do not build nests.

The great potoo is a world leader at pretending to be a tree stump, spending most of its time perched upright on branches.

The birds are about 38cm long and are a grey brown colour, which help them blend in with their surroundings.