Giant spider found in a little boy’s room in NSW

A giant huntsman spider has terrorised an Australian family and attempted to make a bold escape as they trapped it in a plastic container.

A video of the enormous creature, which made its way from their laundry to a nearby bathroom, was captured by a father in Moruya Heads, New South Wales.

And it’s enough to make your skin crawl.

The footage shows the family using a clear takeout container to hold the spider in place, but as they move a piece of paper underneath it, the huntsman almost escapes.

With precision they work as a team to secure the tricky beast before taking it outside.

‘Last Saturday, my wife spotted a big huntsman spider in our laundry room. The next day the spider had moved further into the house and my son was having trouble dealing with it,’ the father explains in a post for Viral Hog.

‘He needed to get to the bathroom and was too scared. I went up to check for her in the laundry room and she was gone. A few days went by and we thought she was truly gone.’ 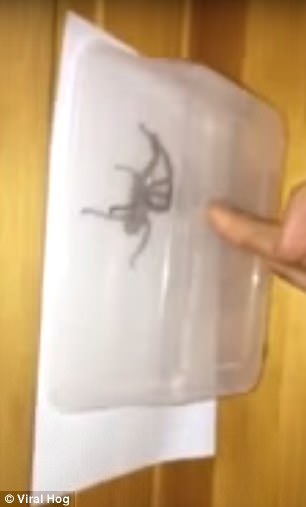 But as all Australians know, spiders are a fact of life in the country and are never really gone. As this family discovered shortly after (pictured)

But as all Australians know, spiders are a fact of life in the country and are never really gone. As this family discovered shortly after.

‘Then yesterday my son found it again in his room. My wife and I captured and released the spider in our backyard. We have since found out that huntsman spiders have a very strong homing character and would more than likely return to our home in the coming days,’ he continued.

But the family aren’t alarmed by this news and feel as though the situation gave their child some much needed appreciation of fearsome animals. 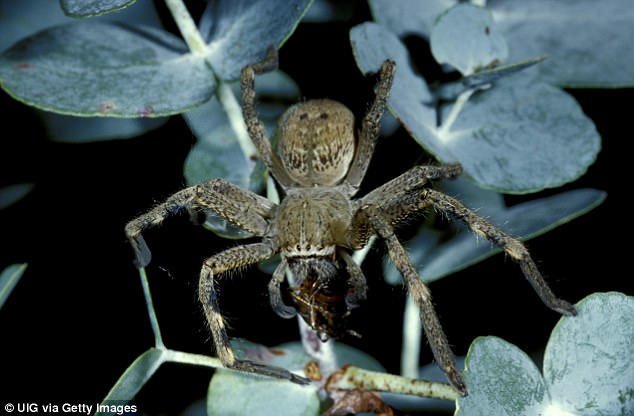 Many commenters on social media where quick to praise the family for their thoughtfulness. But they stressed that more drastic measures would have been taken in their own cases (pictured is a huntsman spider)

‘For my wife and I, to treat something that we are so afraid of with compassion and kindness in front of our kids is a good way to show them and others it’s not so hard to do the same. Maybe it is a spider or something else you are really afraid of – it’s not that hard.’

Many commenters on social media where quick to praise the family for their thoughtfulness. But they stressed that more drastic measures would have been taken in their own cases.

‘The only solution is to drop a nuke inside that room,’ one cheeky comment read.

‘What does this thing hunt?? Elephants??? Where IS this??’ Another person added.