They insisted there were no hard feelings after their split.

And Gigi Hadid has proved that she is still on good terms with ex Zayn Malik, after ‘liking’ a snap posted by the singer on Thursday.

The 23-year-old model ‘liked’ the image Zayn shared of his glittering awards shelf on Instagram, after stunning fans with a dramatic new look in light of his breakup.

Good terms: Gigi Hadid, 23, has proved there are no hard feelings between her and ex Zayn Malik, as she appeared to ‘like’ a snap posted by the singer on Instagram on Thursday

Zayn shared a snap of his awards collection with fans as he thanked them for all his musical success, with some of the prizes including an MTV Video Music Award, a Billboard Music Award and several Official Chart awards.

The Pillowtalk singer captioned the post: ‘Looking at last years achievements blows me away..I can not begin to describe how grateful I am, from Bradford to here , this is all a dream to me still.

‘I owe it all to my incredible fan base love you all!! So much!! and new music coming for you all soon.’ 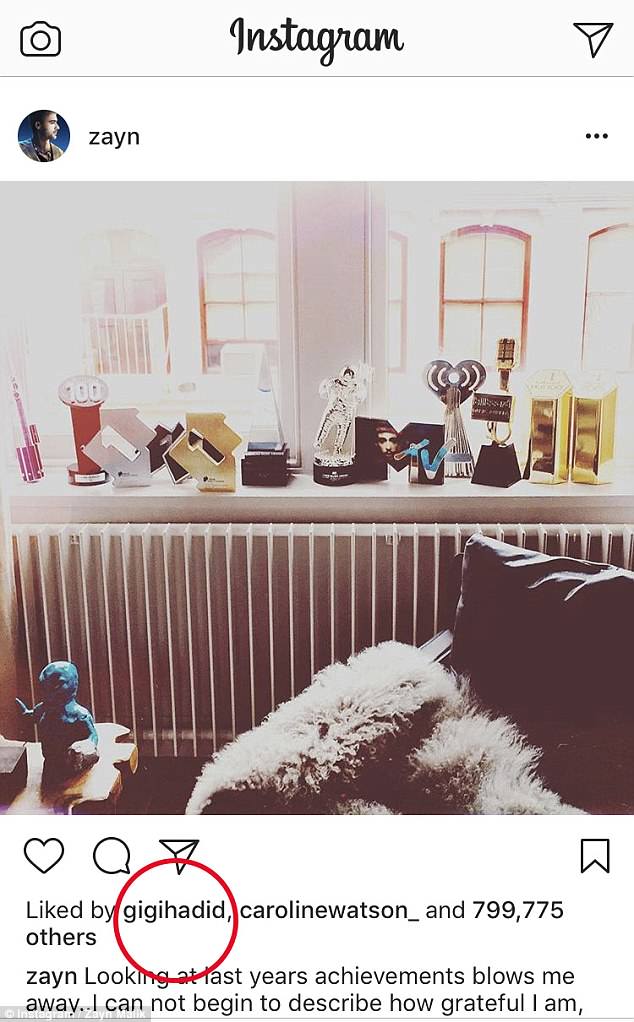 Glittering: Zayn posted a snap of his glittering award shelf, and among the array of likes was one by his ex Gigi, two weeks after the couple’s split

Among the 1 million likes on the post was one by Gigi, with several eagle-eyed fans noticing the support of Zayn’s former flame.

One wrote: ‘Gigi liked this.. aww…’ while another added: ‘Proud of you Zking.. @gigihadid always supporting you.’

A third commented: ‘You still supporting Z , love u @gigihadid.’

Gigi has thrown herself back into work following her split from Zayn, and was spotted showing off her incredible model physique on Thursday as she stepped out in Paris rocking a jumper emblazoned with an image of models kissing.

Meanwhile Zayn has gone for a dramatic hair transformation in light of his breakup, showing off his fluorescent green hair as he headed out in Miami on Wednesday. 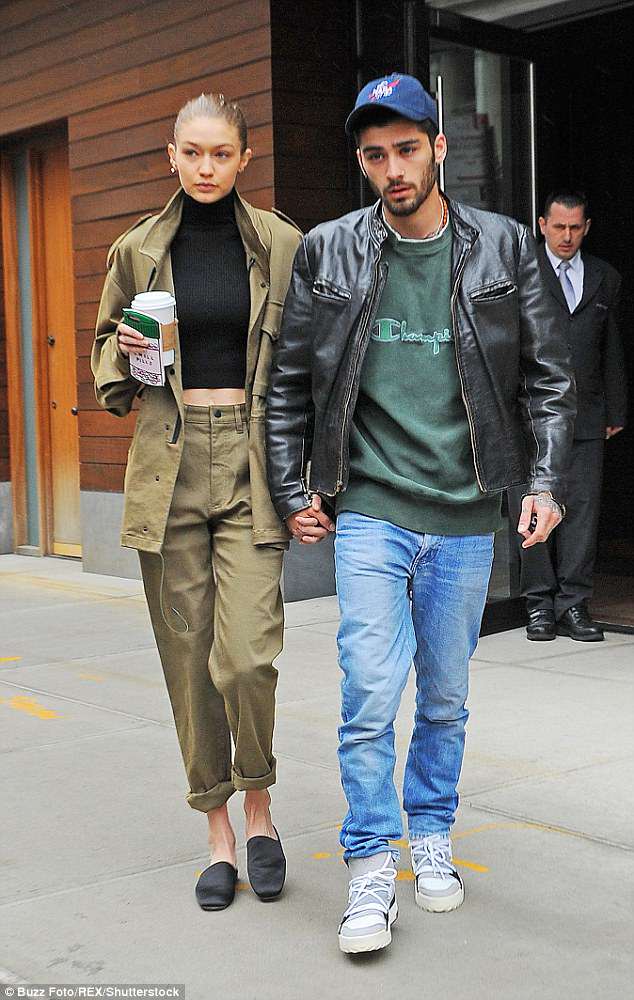 Good terms: The former couple appear to have no hard feelings after their breakup, as Gigi throws herself into work in Paris and Zayn works on his new music in Miami 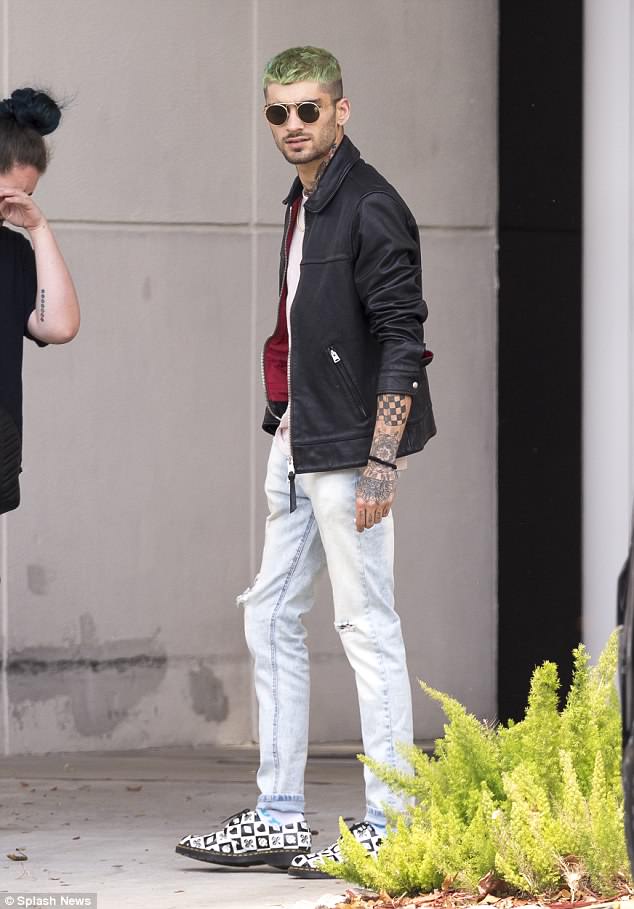 Transformed: The Pillowtalk singer chose a dramatic new look after his split, as he stepped out on Wednesday sporting a fluorescent green new hairstyle

The pair confirmed they had parted ways after two years of romance earlier this month, following a week of swirling break-up rumours.

Taking to Twitter to confirm the speculation, the former One Direction star said: ‘Gigi and I had an incredibly meaningful, loving and fun relationship and I have a huge amount of respect and adoration for Gigi as a woman and a friend. She has such an incredible soul.

Just 11 minutes later, Gigi released her own statement on the site, writing: ‘I’m forever grateful for the love, time, and life lessons that Z and I shared.

‘I want nothing but the best for him and will continue to support him as a friend that I have immense respect and love for. As for the future, whatever’s meant to be will always be. xG.’ 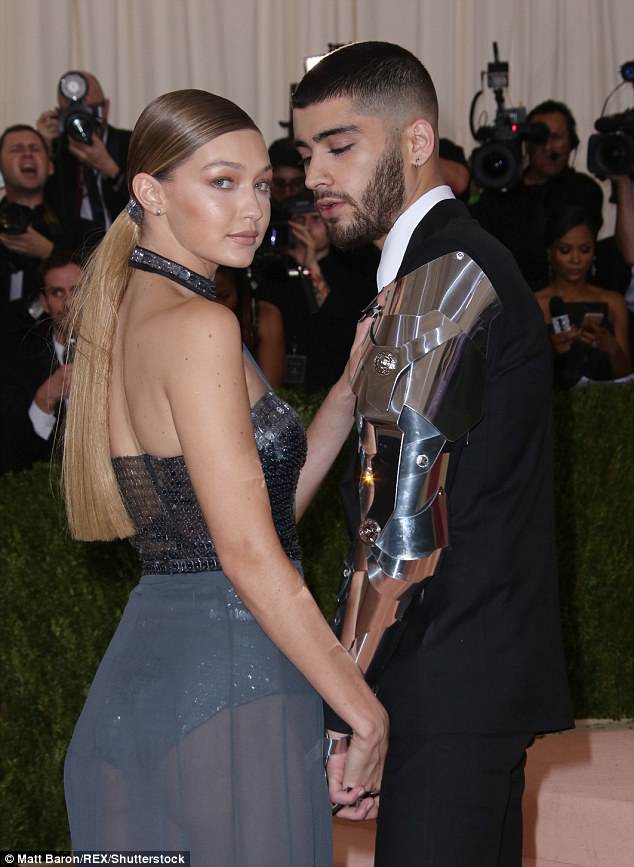 Over: Zayn and Gigi announced their split in mid-March after two years together, tweeting separate statements confirming the news after a week of break-up rumours