She’s basking in the glow of newfound motherhood, but still taking the time to fulfill her civic duties.

Gigi Hadid took to Instagram over the weekend with an arresting series of images, urging her 60.1m followers to ‘make sure’ to have a ‘plan’ to vote ahead of the US General Elections on November 3rd.

The stunning model, 25, started the gallery off with a beautiful mirror selfie, in which she wore a ‘VOTE’ shirt while also showing off her tiny post-baby waist.

Prioritizing the vote: Gigi Hadid took to Instagram over the weekend with an arresting series of images, urging her 60.1m followers to ‘make sure’ to have a ‘plan’ to vote

Gigi also wore a pair of lovely yellow slacks in the glitter-filter snap, and touched her beautiful brown hair as it fell in front of her shoulder.

‘I voted absentee last week with my daughter next to me, for an America I want her to see,’ Hadid began in her caption.

‘But not just for us,’ she continued. ‘for fellow Americans that are less privileged, with hope for a nation that is unified, that is empathetic, & for a leader that is compassionate.’

‘YOU HAVE A WEEK AND A HALF,’ she added, along with a ballot box emoji. 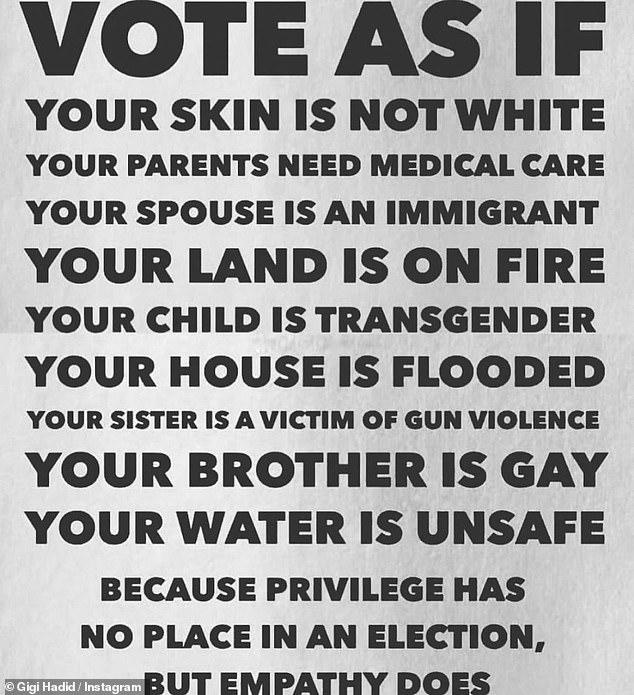 Wise words: She also posted a galvanizing call to action, in the form of a black-on-white text slide focusing on the importance of empathy as opposed to privilege in the voting process

‘IF YOU’RE VOTING EARLY IM PROUD OF YOU. IF YOU MAILED IN YOUR ABSENTEE BALLOT I’M PROUD OF YOU. (&& if you dropped it off at your County’s Board of Elections Office or at an Early Polling Site I’m proud of you!!)

‘IF YOU’RE GOING TO THE POLLS ON NOVEMBER 3RD I’M PROUD OF YOU. Whatever your PLAN, I’m proud of you; make sure you have one !!! Let me know below,’ Gigi concluded.

She then posted a galvanizing call to action, in the form of a black-on-white text slide. 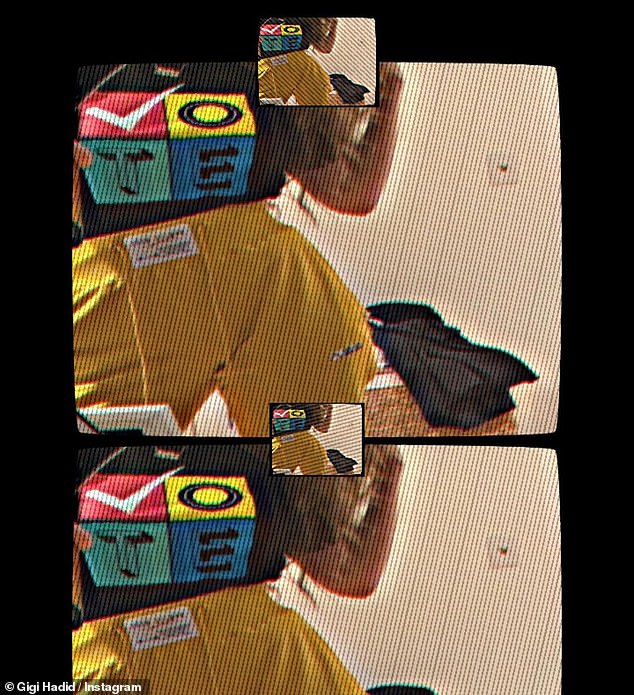 A hip, dip and a VOTE: The young mother then added another image of her colorful ‘VOTE’ tee, which also gave another peek of her small post-baby waist and hips sheathed in yellow pants

‘Vote as if your skin is not white, your parents need medical care, your spouse is an immigrant, your land is on fire, your child is transgender, your house is flooded, your sister is a victim of gun violence, your brother is gay, your water is unsafe,’ the image proclaimed in all caps, ‘because privilege has no place in an election, but empathy does’.

The older sister of Bella and Anwar Hadid then added another image of her colorful ‘VOTE’ tee, which also gave another peek of her waist and hips sheathed in her yellow pants.

And while Gigi, who welcomed her baby girl with partner Zayn Malik in September, is getting in on the voting frenzy, she isn’t the only one in her famous family to do so. 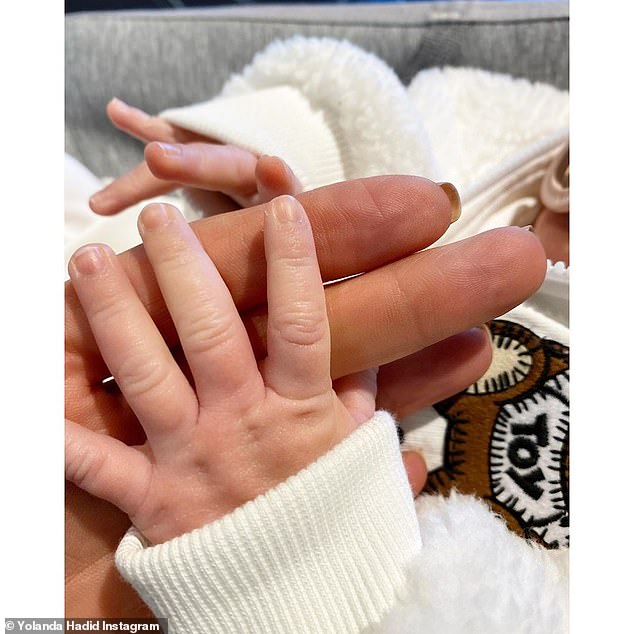 Earlier this month, younger sister Bella posted a brief selfie video to her Instagram feed with their mom, former Real Housewife of Beverly Hills Yolanda Hadid, with a butterfly filter on their faces.

‘I’m so proud of my mom for registering to vote,’ Bella wrote in the caption. ‘She is going to her local polling site on Nov 3rd!!! Where are you guys voting !?!!!!!’

She added the hashtag #BidenHarris2020, along with three blue heart emojis. 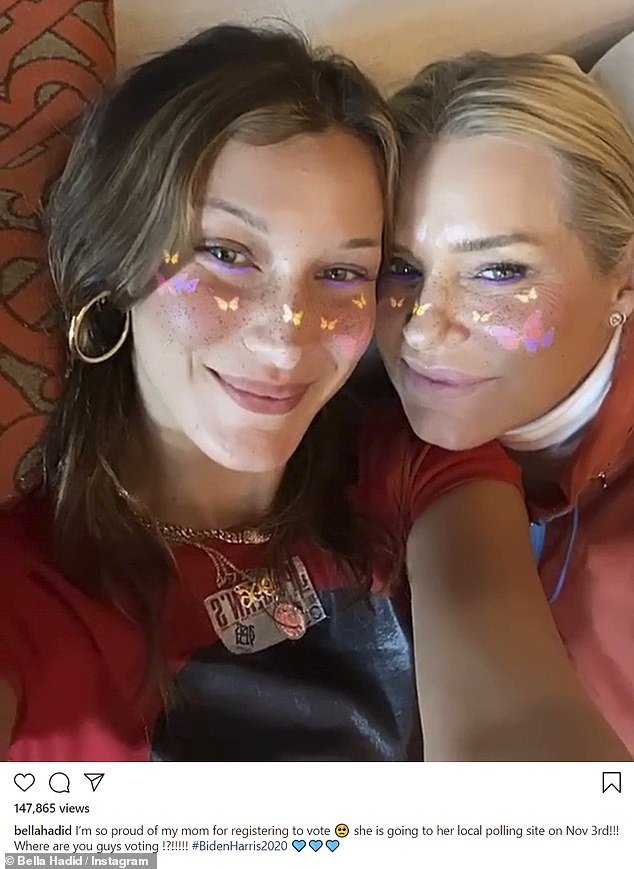 Engaged family: Gigi isn’t the only member of her famous family to get in on the voting frenzy, as seen on younger sister Bella’s Instagram recently