Senator Kirsten Gillibrand says she has benefited from her ‘whiteness,’ including in her professional career.

Gillibrand said that ‘as a white woman’ she has ‘certainly experienced enormous amounts of white privilege’ as she spoke at presidential forum.

She spoke repeatedly of a black staffer who’s her traveling companion on the campaign trail. She the aide is treated differently than she is at hotels and restaurants.

‘There is a deference that is given to whiteness in society today. And, you see it all the time,’ she told DailyMail.com after her remarks.

Senator Kirsten Gillibrand says she has benefited from her whiteness throughout her entire life, including in her career

‘I’ve sat with black Americans, and they’re literally not listened to,’ she continued.

Gillibrand provided additional examples of how those around her have been discriminated against in a variety of circumstances and told DailyMail.com that she had ‘absolutely’ benefited from her whiteness in her career in a number of ways that she believes it’s her responsibility as a senator and presidential candidate to rectify.

She said when she was stopped for driving the wrong way down the street, a police office asked her if she needed assistance.

‘If I was a black woman, or God forbid a black man, he would not only pull me out of that car, he might arrest me. I could be shot,’ she said.

Gillibrand went on to talk about her challenging pregnancies, and the first-class health care she received.

‘I’ve just seen it, and it’s painful to watch, and it has to change,’ she said, asserting that she has a ‘comprehensive approach’to address systemic racism. 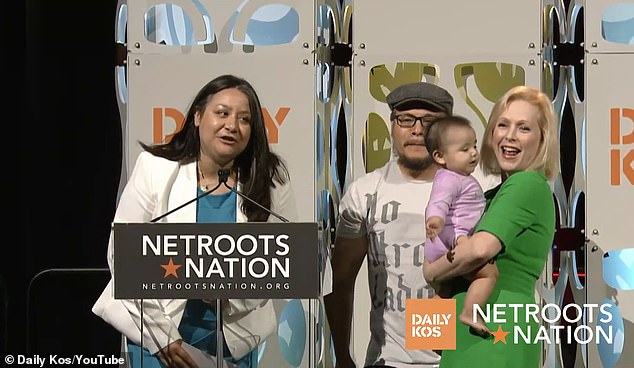 Asked specifically about how she may have benefited in her career by DailyMail.com, she sighed deeply and said, ‘I am, I am certain I have been. I’m certain of it. I think you know disproportionately that black and brown people have less economic opportunity. Just look at the pay gap.

‘The fact that white women earn more than black women, earn more than Latinas. It’s in the pay that I receive, so the truth is yes, I have benefited because of my whiteness, and that’s just a fact.’

She did not suggest white privilege helped provide a platform for her current bid for the presidency of the Senate seat she inherited a decade ago.

Gillibrand was appointed to the U.S. Senate in 2009 by New York’s governor to fill the void created by Hillary Clinton when Barack Obama made her secretary of state.

She had just been elected to her second term in the House of Representatives. She went on to win the next year’s general election with 63 percent of the vote and expanded her lead six years after that by four percentage points.

The mom of two worked as a defense attorney at Manhattan law firms, one of which she made partner at, prior to her first congressional election.

Her remarks on white privilege Saturday were precipitated by a moment on her bus tour three days earlier when a woman told her that residents of the town do not feel particularly privileged.

Gillibrand had told the woman at the Youngstown, Ohio, stop that the conversation on privilege ‘is about is when a community has been left behind for generations because of the color of their skin, when you’ve been denied job after job after job because you’re black,’ and your children have a higher mortality rate.

In Philadelphia, at a forum for 2020 candidates for president, Gillbrand expanded on her answer, saying, ‘I had to recognize her pain, her suffering that is real. Because it is.’

Gillibrand said she believes it is her job as an elected official to fight for the woman’s family, if they were her own relatives.

‘But this conversation about white privilege is so important. Because what she doesn’t see, is that, as her son grows older, as my sons grow older, there’s going to be moments in his life that his whiteness protects him. His whiteness changes how’s he treated,’ she said.

Offering examples, she told the crowd: ‘When he walks down the street in a hoodie, with a bag of M&Ms in his pocket, he wont be shot,’ she said, tearing up. ‘When her son’s car breaks down, and he needs help and walks into someone’s home and knocks on the door, he’s not going to be shot.

‘When her son applies for a job, he’s not going to be discriminated against because of the color of his skin. When her son smokes pot, like lots of teenagers in America, the fact that he’s white means he probably won’t get arrested. And if he was, he’d probably be given a second chance.’

Gillibrand brought up her black aide and said that ‘as a white woman, who has certainly experience enormous amounts of white privilege’ it ‘infuriates me’ when she’s treated differently.