‘I just got a little friend that walked in!’ Ginger Zee’s two-year-old son sweetly interrupts her at-home Good Morning America broadcast to ask for a DONUT

Ginger Zee’s two-year-old son Miles interrupted her live Good Morning America broadcast to sweetly ask her for a donut while she was working from home ahead of the holiday weekend.

The 39-year-old meteorologist was in the middle of a segment on Friday when her little boy walked onto her makeshift set with a very important request. ‘Donut!’ he told his mom as she balanced him on her hip.

‘Obviously, I just got a little friend that walked in here and wants a donut,’ Ginger joked in the adorable clip.

Special guest! Ginger Zee has a surprise visit from her two-year-old son Miles on Friday when she was broadcasting Good Morning America live from her home 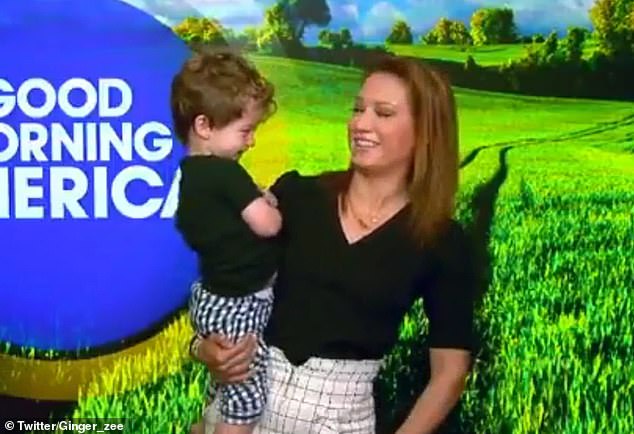 Request: The 39-year-old held her son on her hip as he looked at her and said, ‘Donut!’ 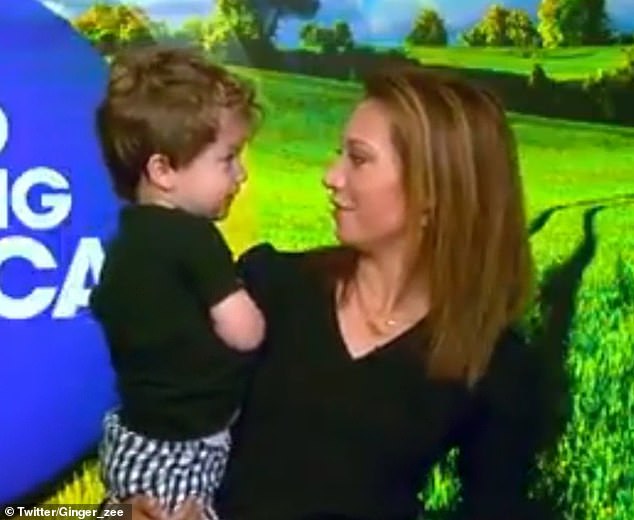 Too cute: ‘I just got a little friend that walked in here and wants a donut,’ he meteorologist said

The mother of two shared footage of the moment on both Twitter and Instagram, explaining this has become a regular occurrence since she started working from home.

‘We rarely have donuts and my son wandered into my shot today to once again (this happens almost every Friday) request a donut,’ she tweeted.

Ginger noted on Instagram that Miles typically makes his appearances when she is filming promos with Reggie Aqui and Kumasi Aaron from ABC7 Mornings.

However, on this particular Friday, he decided to go big with a guest spot on GMA. 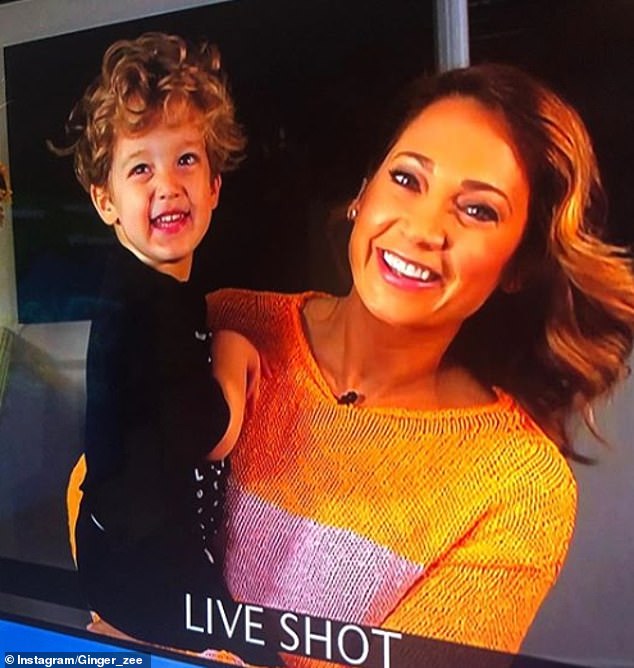 Mommy and me: Ginger explained that Miles’s guest appearances have become a regular occurrence since she started working from home 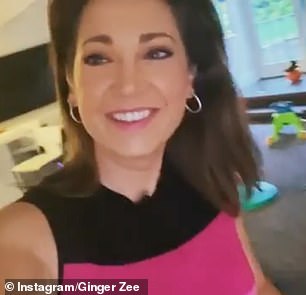 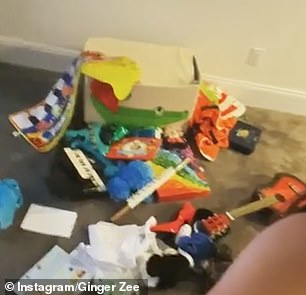 Making it work: On Memorial Day, she joked about her messy ‘co-workers’ while revealing the toys scattered around her living room 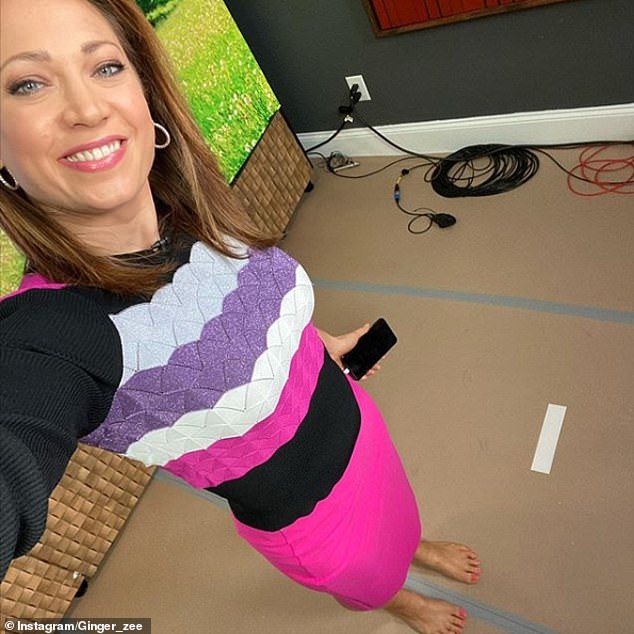 New normal: Like most broadcasters, Ginger has set up a makeshift studio in her home

Hilariously enough, the mom said her son rarely eats donuts, even though they have become one of his favorite things to request.

‘He has had two donuts total in his life but he reads a book that has donuts in it every day. So he is ALWAYS thinking about them,’ she explained on Instagram.

Ginger and her husband Ben Aaron also have a four-year-old son Adrian, and she has admitted that working at home can be a little chaotic.

The GMA star shared a video of her messy living room in her suburban New York home while she was filming on Memorial Day. 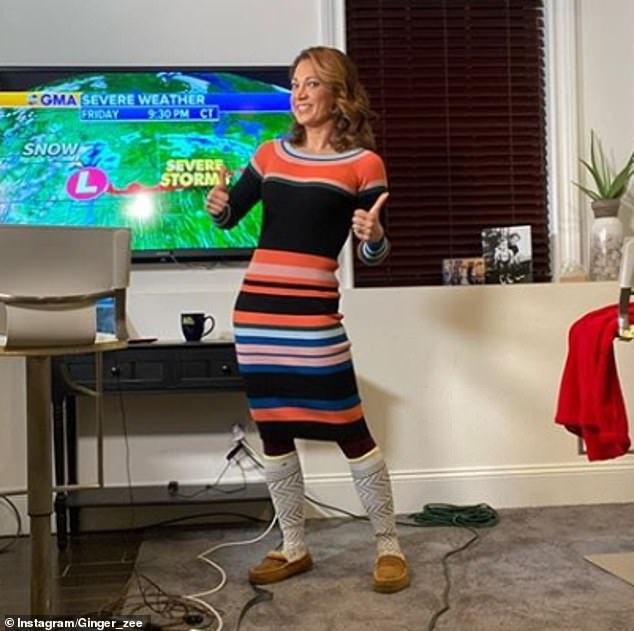 Positives: Not only does Ginger get to spend more time with her boys, but she also no longer has to wear heels to work 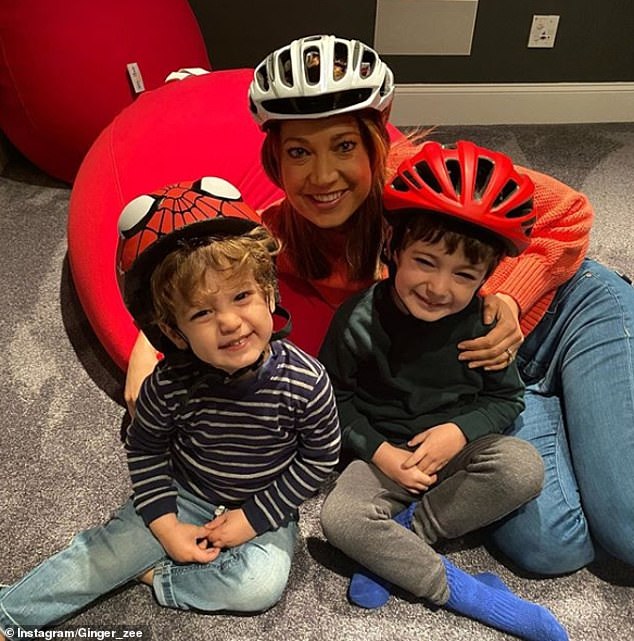 Family of four: Ginger and her husband Ben Aaron also have a four-year-old son Adrian 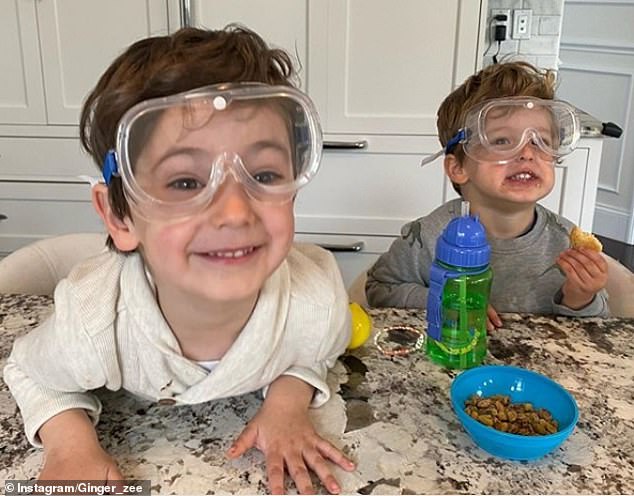 ‘Anyone else have a work from home problem where the co-workers are super messy? she asked while panning to all the toys on the floor.

Like most broadcasters, she has set up a small studio in her home, and there has been plenty of positives for Ginger. Not only does she get to spend more time with her boys, but she also no longer has to wear heels.

‘Not sure how long I’ll be home (happy to stay as long as possible and I love being able to see my boys when they wake up)… but one thing that has been so great during stay at home: NO HEELS. My feet are so happy,’ she captioned a picture of herself barefoot last week.