BREAKING NEWS: Gio Reyna is left out AGAIN for USA against Iran in a game they have to win or they are out of the World Cup… and Walker Zimmerman is DROPPED for Cameron Carter-Vickers

Gio Reyna has once again been left out by Gregg Berhalter, despite the USA playing Iran knowing only a victory will be enough to send them into the last-16 of the World Cup.

Defender Walker Zimmerman has been dropped for Cameron Carter-Vickers in the center of the defense. In attack, Josh Sargent replaces Hadji Wright, who started the 0-0 against England.

A tie or defeat against Iran and USA will be knocked out of the tournament in Qatar at the first stage.

But victory will take them into the last-16 and set up a second round game against either Holland or Senegal. If England lose to Wales and USA wins, USA is top of Group B and plays Senegal. If USA is second, it meets Holland. 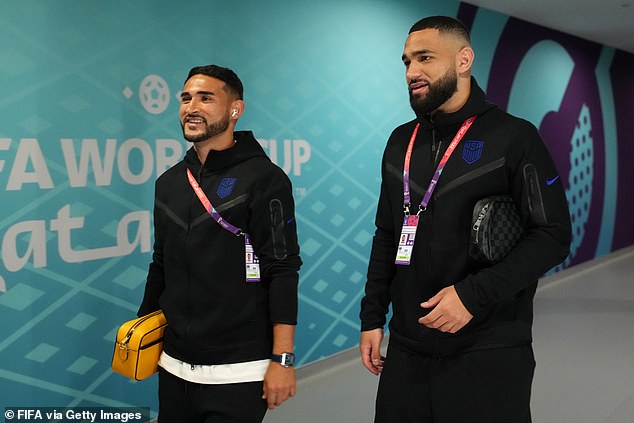 Reyna has been a substitute for the first two games and was unused for the 1-1 tie with Wales. He only played in the last seven minutes against England, replacing Timothy Weah.

Elsewhere, USA has reverted back to a midfield three after Weston McKennie and Christian Pulisic started out wide in a midfield four against England. Pulisic now plays further forward while Weah, who scored against Wales in the first game, spearheads the attack.

The defense remains unchanged – Sergio Dest and Antonee Robinson as fullbacks with Tim Ream partnering Carter-Vickers in the center and Matt Turner in goal.

But it’s the inclusion of Reyna that is now the key talking point ahead of kickoff,?

His omission from the team’s two games so far has been a big surprise and former USA international Eric Wynalda even claimed there had been an argument between Berhalter and Reyna.

He walked back those comments on the eve of the game, saying: ‘This is one of those classic cases where it’s not what I meant to say. The other words I wish I could take back is “asking Gio to go along with it”.

‘No, he’s just expected him to go along with it, would have been a better way to present that. I’m not suggesting that he physically asked Gio, “hey I need you to lie for me.

‘That’s not what happened, and that’s not what I was trying to portray. So if there’s a retraction out of that: it is misleading and I really hate the fact that that question needed to be asked to our national team coach ahead of a game of that magnitude. I don’t want it to be a distraction.’