Girl, 11, has a mysterious condition that caused her head to bend to a 90° angle

An 11-year-old girl is desperately waiting for life-changing surgery after a mysterious condition has left her head bent at a 90° angle.

Afsheen Kumbar is thought to suffer from a muscular disorder that has caused her to develop a severely twisted neck, known medically as torticollis.

The problem first appeared when she was just eight months old and injured her neck while playing outside.

Unable to keep her head upright, Afsheen lives in constant pain, which leaves her struggling to eat, use the toilet and even walk.

Afsheen’s condition also stops her from going to to school, with her spending her days at home in Mithi in Sindh, Pakistan, with her mother Jameelan, 52, and brother Mohammad Yaqoob Kumbar, 27.

With doctors baffled as to what is causing Afsheen’s bent neck, the family have no idea what the future holds for her.

The family are unable to pay for surgery to help Afsheen after her father died of cancer last year, forcing them to live on Jameelan’s salary of £60 ($74) a year while she works as ‘domestic help’.

Afsheen Kumbar is desperately waiting for life-changing surgery after a mysterious condition has left her head bent at a 90° angle. Although not diagnosed, she is thought to suffer from a muscular disorder that has led to a severely-twisted neck, known medically as torticollis 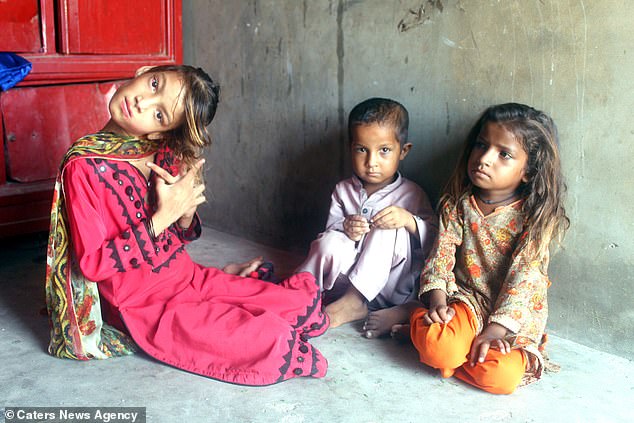 Afsheen lives in constant pain, which leaves her struggling to eat, use the toilet and even walk. Unable to attend school the youngster stays at home with her siblings (two of five are pictured)

Speaking of his sister’s condition, Yaqoob said: ‘We are worried for her future.

‘We do not know what will happen to her.

‘We are anxious that if she is left untreated, she could develop some other disease.’

Left untreated, the constant tension caused by torticollis can cause the muscles in the neck to swell and pressure to be put on the nerve roots.

This has been linked to degenerative spine disease, which occurs when the discs between the vertebrae break down.

Afsheen, who is one of six, was born healthy. Things then took a dramatic turn for the worse when she was eight months old.

The youngster fell while playing outside, hurting her neck.

Torticollis can be caused by injuries to the spine or neck muscles. These causes the muscles to spasm, which can lead to twisting of the head.

Afsheen’s initially thought nothing of her bent neck, until it gradually got worse.

Due to their limited funds, they eventually took her to a local faith healer but it did nothing to help.

The youngster was taken to Agha Khan University Hospital in Karachi, Sindh, in February last year for a medical examination ahead of a possible surgery.

‘They told us there is 50 per cent chance for the successful surgery and asked us to go home and think over it,’ Yaqoob said.

Due to a marriage in the family, the operation was delayed for around a month.

However, Yaqoob claims that after the nuptials, the initial sponsor did not answer the family’s calls.

‘After a month, the leader who promised to sponsor for the surgery never responded to my repeated calls or connected with us,’ he said.

‘We did not have [the] money to take Afsheen to hospital on our own.

‘In the last year, she has been at home. She has not seen a doctor.’

Yakoob used to work at a mobile-phone shop but quit to help his sister travel to her check-ups.

‘I had to quit my job because I had to look after Afsheen,’ he said. ‘I was taking her to hospital but ever since, I have been jobless.

‘My mother earns £60 from working at other’s homes. This is how we are making our ends meet.

‘We have no money to pay for her hospital fees.

‘We cannot even take her to hospital because she cannot commute by public transport and a private taxi costs £70 ($86) [for] each journey.’

Yakoob is calling on the public and Pakistani government to help his sister.

‘We took her to a local doctor in our city but he said only specialists can treat her,’ he said. ‘He advised us to take her to a foreign country.

‘I am pleading the government and locals here to please help my sister. She needs surgery to live a normal life.’