Girl, 11, rushed to hospital with a pencil hanging out of her neck

Girl, 11, rushed to hospital with a pencil hanging out of her neck after ‘landing on the sharpened side when she fell during a break at school’

A girl was rushed to hospital when she fell onto the sharp end of a pencil which penetrated her neck.

The unidentified youngster’s accident occurred while the 11-year-old was playing during break time at school.

She was whisked to The Hospital for Sick Children in Toronto with the pencil still lodged in the left side of her neck.

A CT scan revealed the pencil was completely obstructing her left common carotid artery, stopping blood going to her brain.

The girl was taken for surgery, where doctors managed to remove the pencil. After an ‘uneventful recovery’, she was discharged two days later.

An 11-year-old girl, who has not been named, was rushed to hospital after a pencil penetrated her neck (pictured) when she fell on the sharp end while playing during school break time 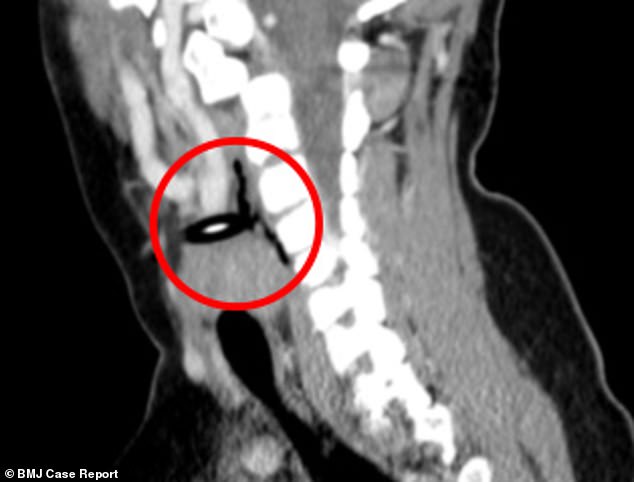 A CT scan revealed the pencil (circled) had penetrated the muscle and completely obstructed her left common carotid artery. Along with the right artery, this provides blood to the head

The operation was led by Dr Graham Roche-Nagle, associate professor of vascular surgery.

Penetrating neck injuries are defined as those that go through the platysma muscle, which runs from the chest to the jaw, Dr Roche-Nagle wrote in a BMJ Case Report.

These can occur due to bullets, stabbings or falling debris, like glass, and are rare in children.

The injuries can damage a person’s airways, digestion or nervous system, and may be worse in children due to their ‘small anatomy’.

The girl was initially taken to a local health centre before being rushed to hospital.

When she arrived, doctors found no bleeding or swollen clots of blood at the site of the injury.

She also did not appear to be in respiratory distress, a life-threatening condition that occurs when the lungs cannot provide the vital organs with enough oxygen.

Due to her stable condition, medics chose to ‘define her anatomy’ before operating.

A CT scan revealed complete obstruction of her left common carotid artery. Along with the right artery, this provides blood to the head and neck.

The girl was given antibiotics and blood thinners before going under the knife.

Surgeons managed to ‘clamp’ her arteries and the pencil was removed.

The medics then ‘refreshed’ the edges of her left common carotid artery and ‘irrigated’ the wound with ‘copious amounts of sterile saline’.

Once discharged, the girl was told to take aspirin, a blood thinner, for three months.

A follow-up appointment revealed her wound had healed well. To keep track of her progress, she underwent a duplex ultrasound, which evaluates blood flow through the arteries and veins, at six weeks.

She then had the ultrasound every six months for a year, which was reduced to annually for two years. A check-up three years after the incident revealed no abnormalities.

WHAT ARE THE COMMON CAROTID ARTERIES?

The common carotid arteries are large blood vessels that supply the head and neck with oxygen-rich blood.

There is one on either side of the body, known as the left and right carotid arteries. These are often used to measure someone’s pulse.

Carotid stenosis can occur if plaque builds up in the arteries, which is known as atherosclerosis. This reduces blood flow to the brain and can cause a stroke.

Some also suffer from carotid sinus hypersensitivity, which is defined as a heightened response to pressure being put on the arteries.

This becomes more common with age or in those with high blood pressure, and can lead to dizziness or a faster heart beat.

If an area of the artery is weak, part of the blood vessel may bulge out with every heart beat, known as carotid artery aneurysm. This raises the risk of bleeding, which can result in a stroke or haemorrhage.

And inflammation of the blood vessels, known as carotid artery vasculitis, can occur following an autoimmune condition or infection.