Girl, 13, is injured as explosives detonate in street

Girl, 13, is injured as explosives detonate in street and police keep ‘open mind’ on whether blast is terror-related

A 13-year-old girl was injured after explosives detonated on a residential street – with police keeping an ‘open mind’ about whether the incident was terror related.

Neighbours said they heard two blasts ring out just after midnight on the road in Tipton, West Midlands, leading to a huge emergency services response.

‘I heard what sounded like fireworks and then screaming so I came outside,’ one resident said. ‘There were two blasts and it was loud. I saw smoke after it happened.’

The injured girl was taken to hospital and a man and a woman treated at the scene. Residents were evacuated before the bomb squad arrived to make the devices safe.

The child was taken to hospital after the devices went off on a road in Tipton, West Midlands, just after midnight. Two other people were treated at the scene

Police said they are not treating the matter as terror-related but are keeping an ‘open mind’. The road remained cordoned off this morning.

A West Midlands Police spokesman said: ‘We have cordoned off and evacuated an area of Coronation Road in Tipton this morning after explosive devices were discovered outside a property just after midnight.

‘A teenage girl from the property who was outside at the time, was taken to hospital with superficial injuries; no-one else was hurt.’

A spokesman added: ‘We are in the early stages of this inquiry and detectives are asking anyone with information who hasn’t already spoken to officers to get in touch on 101.

‘Initial enquiries do not lead us to believe this is terrorism related, however we are keeping an open mind at this stage.’ 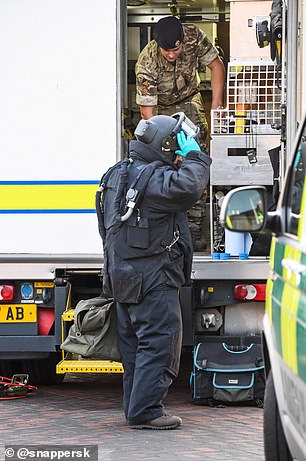 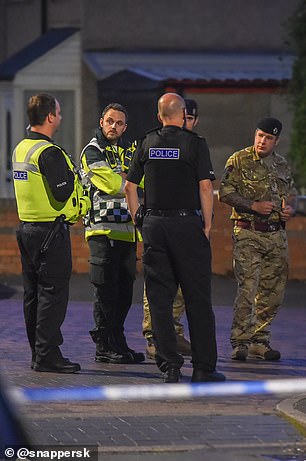 West Midlands Ambulance Service said: ‘We were called at 00:06am to an incident in Coronation Road, Tipton.

‘We sent the Hazardous Area Response Team, one ambulance, two paramedic officers and a Critical Care car with a doctor on board.

‘We treated a teenage girl for injuries not believed to be serious before taking her to Birmingham Children’s Hospital for further treatment.

‘A man and woman were also treated for minor injuries and discharged at the scene.’