Girl, 13, is raped and murdered and her body dumped in a field in India

Girl, 13, is raped and murdered in latest horrific Indian sex attack: Devastated family claim victim’s eyes were gouged and her tongue cut by attackers who abducted her

A 13-year-old girl was raped and murdered and her body dumped in a field in the latest horrific sex attack in India.

Two men were arrested after the child’s body was found in a sugar cane field near the Nepalese border, police said.

The girl’s family had raised the alarm after she failed to return from nearby fields on Friday night.

Her father claims that her tongue had been mutilated and her eyes gouged out – but police dispute this, according to Indian broadcaster NDTV.

Police in India’s most populous state of Uttar Pradesh said a post-mortem showed signs of rape and strangulation.

However, the scratches near the girl’s eyes were probably caused by sharp sugar cane leaves in the field where she was found, police say.

‘The two accused [have] been arrested already,’ the local police chief said, adding that charges of rape and murder would be filed against them.

The girl’s father said the family had gone ‘looking for her everywhere’ before finding her strangled.

‘Her eyes had been gouged out. Her tongue was cut and strangled with a dupatta,’ he claimed.

The alleged attack took place in the Lakhimpur Kheri district in a village close to India’s border with Nepal. 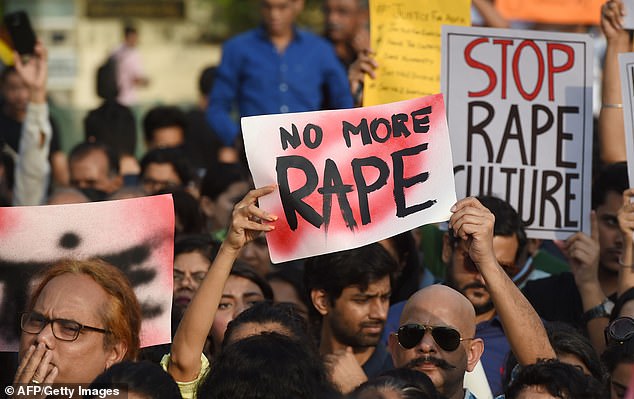 Nearly 34,000 rapes are reported every year in India despite tougher laws and protests in support of victims (such as this one in Mumbai, file photo)

India has a dismal reputation for sex crimes with nearly 34,000 rapes reported every year despite tough new laws introduced in recent years.

The subject has been in the spotlight since the mass demonstrations that followed the gang rape and murder of a student in New Delhi in 2012.

The crime attracted international headlines and four of the attackers were executed earlier this year, but high numbers of sex attacks continue.

Last month a three-year-old girl was raped and killed by two men who dumped her body in a dam before claiming she had been sacrificed for ‘black magic’.

The girl had been reported missing on July 17 and her body was found near a dam three days later, with an autopsy showing she had died of suffocation and trauma.

Investigators said the attackers then tried to ‘misguide police’ by spreading rumours that the girl had been the victim of a dark ritual.