The girl plotted revenge on welfare officer Joy Simon, 61, (pic) because she felt she had not done enough to help her and took offence at a ‘jokey’ comment she had made

A teaching assistant was repeatedly stabbed by a 16-year-old schoolgirl who she thought wanted a hug.

The teenager had written chilling notes to herself vowing ‘to go out with a bang’.

She plotted revenge on welfare officer Joy Simon, 61, because she felt she had not done enough to help her and took offence at a ‘jokey’ comment she had made.

The schoolgirl had appeared to be a model pupil before she inflicted the injuries that left the mother-of-two scarred for life, Hull Crown Court was told.

But a police search of the girl’s belongings suggested that she was a ticking time bomb.

Officers found disturbing messages about her school life, including one saying she planned ‘to go out with a bang in Year 11’.

Another chilling note read: ‘I’m not scared about giving up any more. It’s already happened. Giving up is an opportunity and now I will take it. Take. Take. Take.’

The teenager’s ‘dark thoughts’ were only discovered after she repeatedly lunged at Mrs Simon with a three-inch kitchen knife.

She has admitted wounding with intent and having a bladed article on school premises after denying an earlier charge of attempted murder which was dropped.

The grandmother, who had worked at the school for 24 years, said the teenager ‘came flying into her office at 8.45am without knocking and threw herself at her as she sat at her desk’.

Prosecutor Richard Wright QC said: ‘She at first thought the girl was going to hug her but then felt a thud to her chest and realised that she had been injured or possibly stabbed.

‘As Joy Simon stood to her feet to defend herself the girl used the knife to stab Mrs Simon in the face and then tried to rain further blows on her with the knife.

‘Joy Simon had the presence of mind to grab her wrist and in that way to try and stop her from stabbing her again. But the blows kept coming.’

The attack on Mrs Simon only ended when a cleaner heard her screams and pulled the girl off with another teacher. Mrs Simon has been unable to return to work since the attack in September 2017, in which she suffered wounds that were ‘life threatening’. 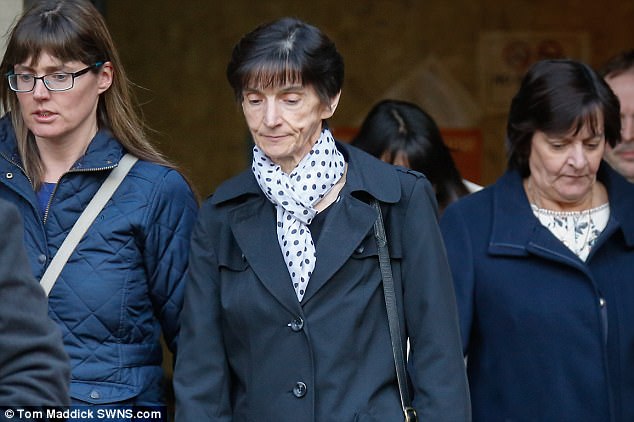 She lost 29 per cent of her blood after being stabbed through her left lung.

She is also scarred from being slashed across the cheek, a wound that causes her constant discomfort, the court heard.

She said in a victim impact statement: ‘I really want to know why this happened. I just want the truth. When I get home I just want to get in and get locked in for the evening so I feel safe.’

Before the attack, the schoolgirl, who cannot be named for legal reasons, had appeared to be the ‘ideal pupil’, the prosecutor said.

But she told psychiatrist Dr John Kent that she had wanted to exact revenge on Mrs Simon.

Mr Wright said: ‘She wanted to hurt her because Mrs Simon was supposed to help people who had problems but had done nothing to help her with her own problems. She went on to tell Dr Kent that she had been annoyed that Mrs Simon had said “Don’t fall” to her in a jokey way when she had seen her nearby some water in the village where she lived.

‘She thought this was insensitive because she had previously told a friend that she was thinking of jumping off a bridge.’

The pupil was remanded in custody for sentencing next Friday by Judge Jeremy Richardson QC, who told her: ‘This is an extremely serious case.

‘I express no observations about sentence save this: You will be going into custody. The only real issue for me to determine is how long that should be for.’