Girl, 16, with broken leg sits on train carriage FLOOR in Dublin after nobody gives up seat

Girl, 16, with a broken leg is forced to sit on train carriage FLOOR in Dublin after nobody gives up their seat for her

A father claims his teenage daughter was not offered a seat on a busy train in Ireland, despite wearing a brace due to a broken leg.

Mark Beggs said his daughter Joanna was travelling on a DART train to Dublin when she was seemingly ignored by fellow commuters.

The 16-year-old, who broke her leg during a gymnastics competition, was left to sit on the floor in the middle of the carriage.

She was with her father and sister Dannielle, who said Joanna ‘had no choice’ but to sit on the floor as standing was too painful.

Dannielle filmed a short clip of her sister sitting in the aisle of the train that her father then posted to Twitter. 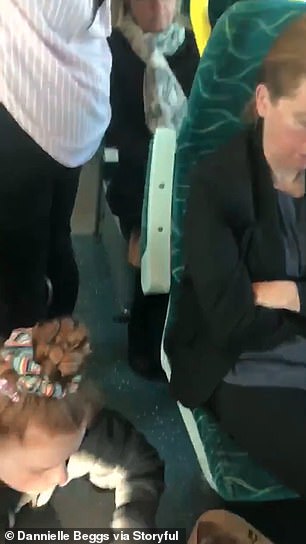 Joanna Beggs sitting on the floor of a Dublin DART train as she adjusts her leg in a brace. Her father claims no one offered her a seat on the busy train

The video shows Joanna sitting on the floor of the train as she adjusts her leg brace with passengers sitting in their seats in the background.

Both Dannielle and Mark said they tried to get Joanna a seat on the DART ‘every day’ that week but to no avail.

Mark wrote on Twitter: ‘This is my daughter with a broken leg on Dart this morning and no one gave her a seat. And this has happened every day this week, what does [sic] say to us as a nation.’

The teenager was left with both of the bones in her left leg broken from the accident last month and needed a pin from her knee to the ankle as well as 40 stitches, her father said.

Mark said this was not the first time his daughter was left standing on the same route from their home in Portmarnock. 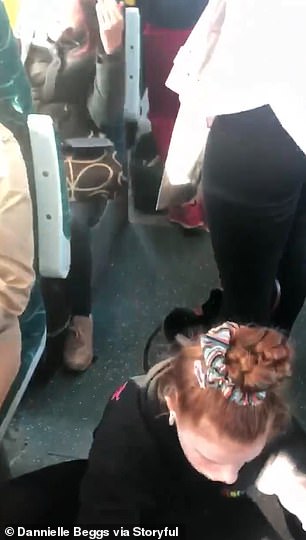 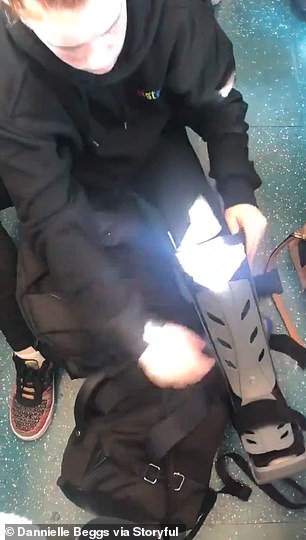 A video posted on Twitter shows Joanna sitting on the floor as fellow passengers remain in their seats. The 16-year-old broke her leg during a gymnastics competition last month

He told Dublin Live: ‘She [Joanna] was getting the train down last Wednesday too with her sister and the only person to offer her a seat was an elderly lady.

‘She didn’t want to accept it because of the woman’s age but the kind lady insisted.

‘Joanna had asked another person for their seat before that because she is in constant pain but they moaned about giving it up.

‘It’s just a lack of manners. Any decent person, in good health, would give up their seat for someone in need.

Mark added he had not reported the incident to Irish Rail as the operator was not responsible for commuters actions.