Girl, 17, shares shocking images of her squalid upbringing with her drug addict mother

A 17-year-old girl has shared shocking childhood photos that lay bare the reality of being raised by a ‘druggy’ mother.

The teenager, from Idaho, posted the devastating family album on Reddit and Imgur this week alongside details of the squalor endured by herself and her four siblings.

‘This is me at 18 months,’ she wrote alongside a photo of a toddler lying in a filthy room strewn with drug paraphernalia. ‘Yes, those are needles on the windowsill and yes, this is what the entire house looked like. #druggymomlife’

Another image shows her then-toddler age sister tottering across a floor covered in soiled clothes and discarded trash, while a third captures the family’s kitchen with cupboards full of ‘more pills than food’.

The teen daughter of a ‘druggy mom’ posted a devastating family album on Reddit along with details of the squalor endured by herself and her four siblings. She claims this image shows her at 18 months, lying on a filthy bed with needles on the windowsill, although she looks younger 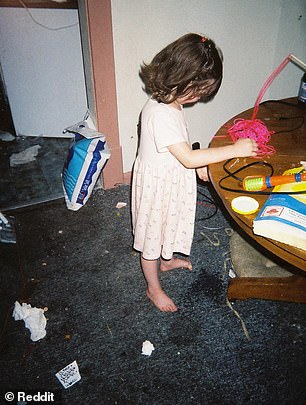 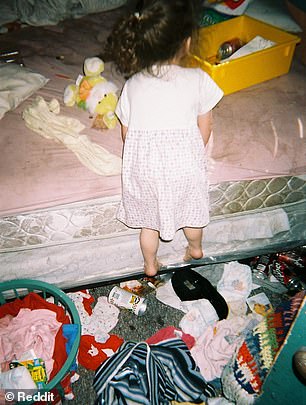 Another image shows the Idaho teen’s then-toddler age sister tottering across a floor covered in trash, left, and another sister amusing herself amid the filth of the family home, right

The girl explained the photos were taken by her then-16-year-old brother in a bold move to expose the horrific conditions. He showed the images to his teacher who phoned the Child Protection Service (CPS) and the children were taken into care.

Commenting on the photo of the poster as a toddler, users note that she looked quite small for her apparent age.

The girl added that her age was harder to identify because she and her siblings ‘were all pretty malnourished and underdeveloped’ partly because her mother was smoking, using drugs and drinking alcohol throughout her pregnancy and because the family were living off food stamps.

However she also acknowledged she might have been less than a year old, or even younger.

She then shared more photos depicting her childhood living in a house with a carpet thick with dirt, cluttered living spaces, filthy bedding, broken glass in a pile of dirty toys, a messy bathroom floor with a knife on it and a kitchen with ‘more pills than food.’ 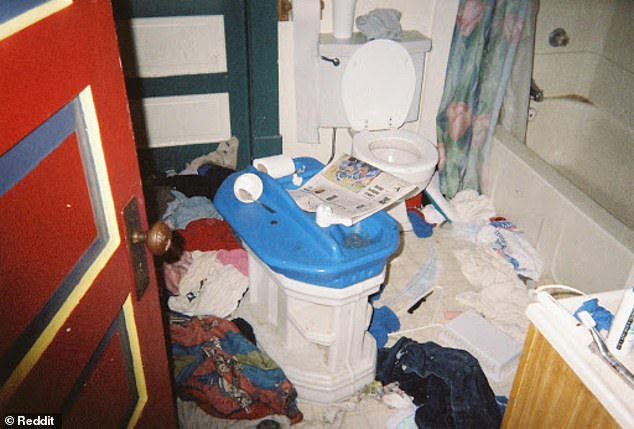 A knife is seen on the bathroom floor of the home in Idaho which is covered in debris. It is one of  the photos shared by the teenager on Reddit and photo sharing site Imgur 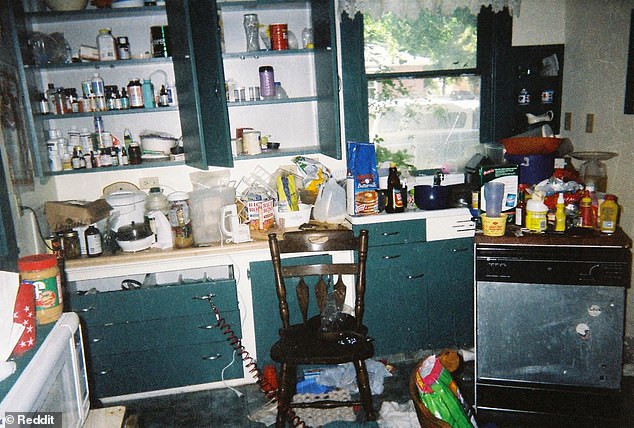 A kitchen ‘with more pills than food’ according to the poster. She said they lived off food stamps. The girl who posted explained she and her siblings were later taken into care

She also revealed that her heroic brother decided to take pictures of their situation and showed them to his teacher who reported the case to the CPS (child protective services).

It was then that the children were all removed from the home and put into foster care, where the teenager remained on and off until she was adopted aged nine and taken to a different state.

Asked how she copes, the poster said she prefers to take a positive outlook on life and added: ‘Weirdly enough, I actually love these photos! It just reminds me of how far I’ve come and what I can accomplish!’

Even more shockingly, she said she also chose to forgive her mother, although it took ‘a long time.’

‘They’ve both passed away unfortunately. My father wasn’t an addict. My mother did fight her addiction till the day she died.

‘My mother was not her disease and it took me a long time to realise that,’ she added. 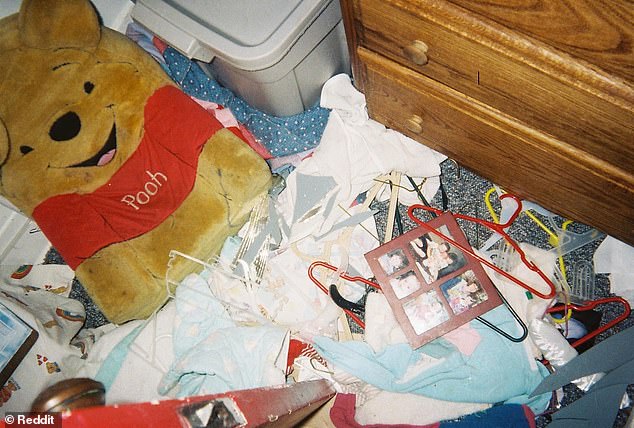 A floor covered in toys, clothes and family photos with broken glass strewn across the middle 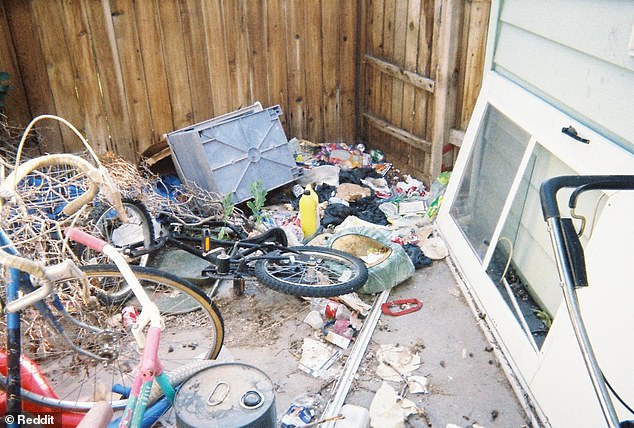 The garden strewn with litter and old bikes. The girl eventually went into care with the CPS

She said that since she was adopted things have improved drastically, despite suffering from PTSD and anxiety.

‘I’m a lifeguard, I’m about to go onto my senior year! I have a super awesome boyfriend and a college fund set up!’ added the 17-year-old.

She also said that when the time comes, she will foster or adopt an older child instead of giving birth.

Although she didn’t mention her three other siblings, she said that her brother who took the life-changing pictures is happily married and his wife is ten weeks into her pregnancy with ‘child number four.’

She also stated that her sister who ‘basically raised’ her graduated with a Bachelors of Science in Child Development and is a Behavioral Interventionist in an Autism Unit.

Some people encouraged her to write an autobiography to ‘inspire others in similar situations’ while others said her story ‘nearly made me cry.’ 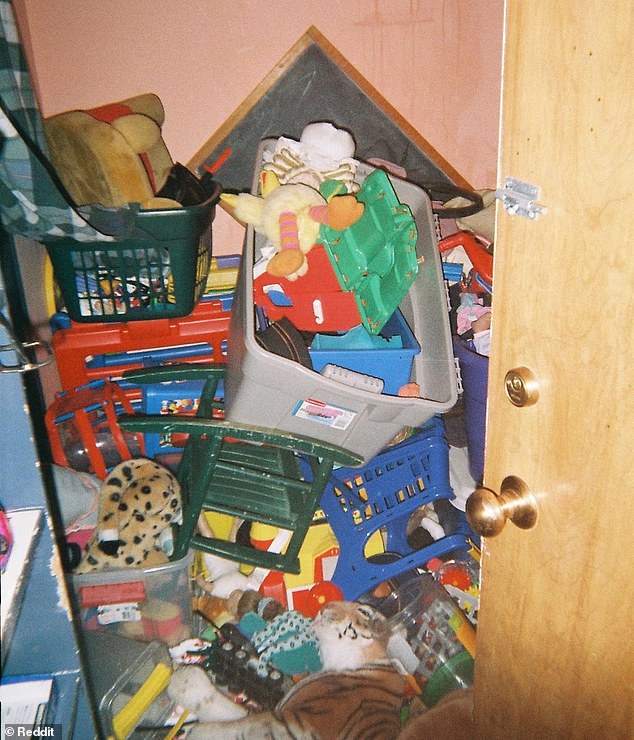 The girl said she chose to forgive her mother, who is now dead, although it took ‘a long time’. Pictured, one of the closets in the family home piled high with discarded toys