Girl, 5, who takes cannabis for her seizures allowed to use medication at her school, judge rules

A five-year-old girl who takes medical marijuana to treat her seizures has been allowed to keep bringing the drug to her California school, a judge has ruled.

Brooke Adams, of Santa Rosa, suffers from a rare form of epilepsy that – when left untreated – can lead to seizures that last at least half an hour.

Her parents, Jana and Jonathan, say things began to change after she was prescribed new medication, a pill with medical cannabis oil.

But the Rincon Valley Union School District in Santa Rosa sought to ban it from school grounds because it contains the active ingredient in marijuana.

On Friday, however, Judge Charles Marson sided with the Adams family, reported The Santa Rosa Press-Democrat. 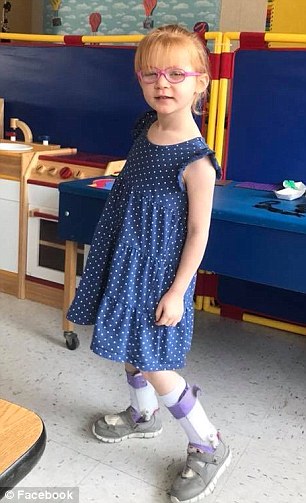 A judge has ruled that Brooke Adams, five (left and right), who takes medical marijuana to treat her seizures has been allowed to keep bringing the drug to her California school. She suffers from a severe, genetic form of epilepsy known as Dravet syndrome 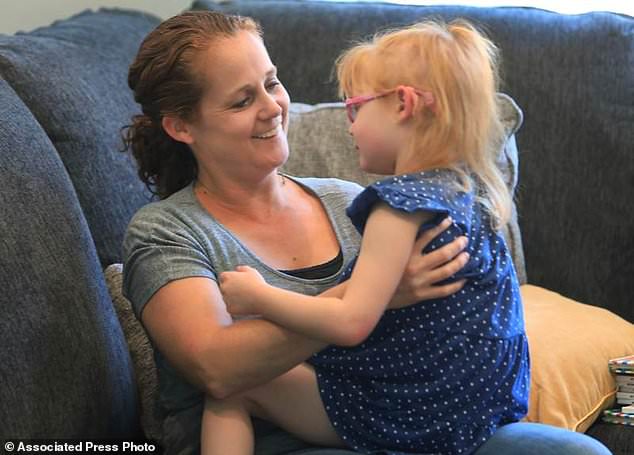 Symptoms associated with Dravet syndrome include prolonged and frequent seizures, delays in speech and language, sleeping issues and chronic infections. Pictured: Brooke with her mother, Jana, at their home in July 2018

Brooke suffers from what is known as Dravet syndrome – a genetic, severe form of epilepsy that appears during the first year of life, according to the National Center for Advancing Translational Diseases.

The condition is rare, affecting one in about 15,700 children, 80 percent of whom have a mutation in their SCN1A gene.

Common symptoms associated with Dravet include prolonged and frequent seizures, trouble with balance, delays in speech and language, sleeping issues and chronic infections.

According to the Dravet Syndrome Foundation, patients face a 15 to 20 per cent mortality rate due to SUDEP (Sudden Unexpected Death in Epilepsy) and seizure-related incidents such as drowning and infections.

There is no cure for Dravet, but treatments work to reduce the number of seizures and medications fall under the classification of first-line or second-line.

Brooke was diagnosed with the syndrome when she was just an infant.

Her father, Jonathan, told KGNS that her seizures would last at least half an hour and leave her parents so scared that they would call paramedics.

Doctors tried treating her with several different anti-seizure drugs, but they proved to be mostly ineffective.

When Brooke was one year old, her parents obtained a medical marijuana card and that’s when they say her symptoms dramatically improved.

They say her seizures began happening less frequently and, when they did occur, were for shorter periods of time.

‘With the emergency THC medicine, she pretty much just like, takes a nap, and she’s back to normal,’ Jonathan told NBC Bay Area. 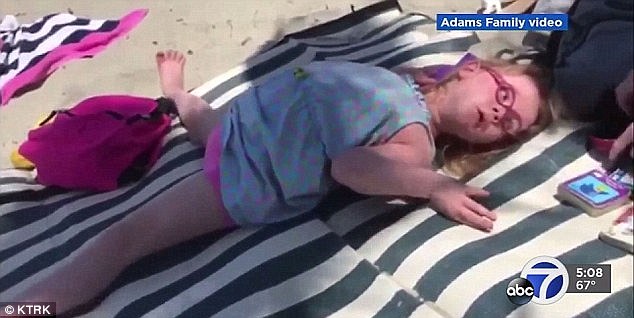 Brooke was diagnosed with Dravet syndrome when she was just an infant and her parents say she used to have seizures that lasted at least half an hour. Pictured: Brooke suffering a seizure

Her parents said both the duration and the frequency of her seizures shortened after she began taking medical marijuana. Pictured: Brooke suffering a seizure 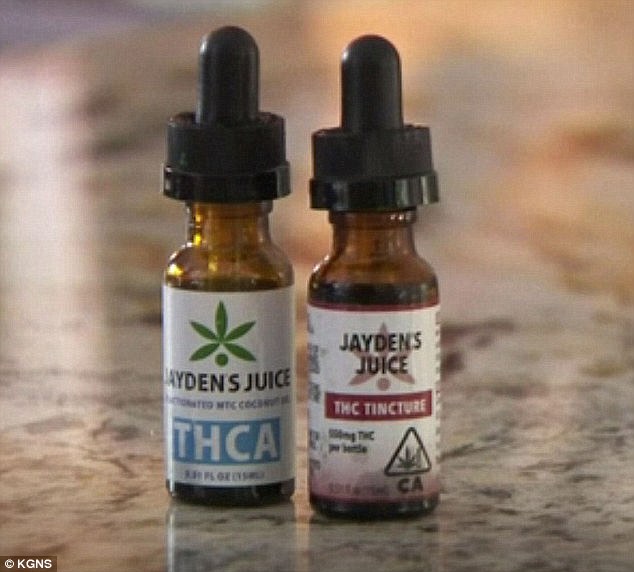 Both THC and CBD, two of marijuana’s main compounds, attach to receptors and block the transmission of pain signals; but how it works in epilepsy is not entirely understood.

Back in June, the FDA approved the use of an oral CBD solution called Epidiolex to treat Dravet syndrome and Lennox–Gastaut syndrome, another rare form of epilepsy, in patients aged two and older.

But despite medical marijuana being legal in California, state law does not allow it within 1,000 feet of a school.

There is a bill that has been introduced in the state legislature that would allow children to take medicinal cannabis at school.

This law put the Adams family and the Rincon Valley Union School District head-to-head in a heated dispute.

In July, Judge Marson issued a temporary order that permitted Brooke to start kindergarten at Village Elementary School in August while the district’s objections were considered.

So far, a nurse who accompanies Brooke to school has had to apply the oil three times to treat seizures. 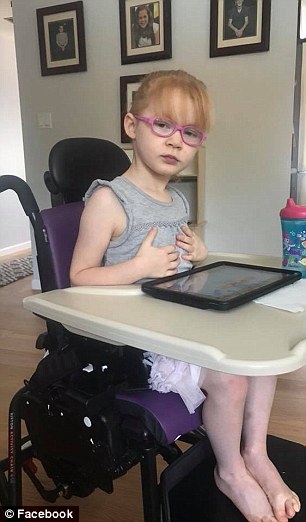 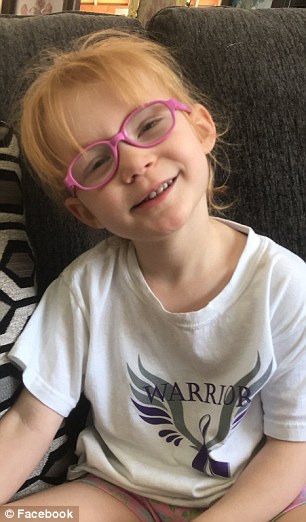 Despite medical marijuana being legal in California, state law does not allow it within 1,000 feet of a school. This law put the Adams family and the Rincon Valley Union School District head-to-head in a heated dispute. Pictured, left and right: Brooke 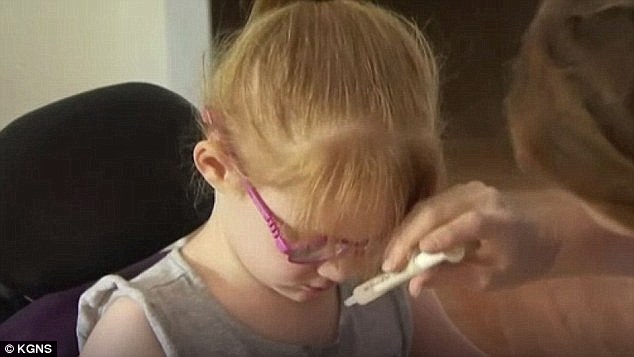 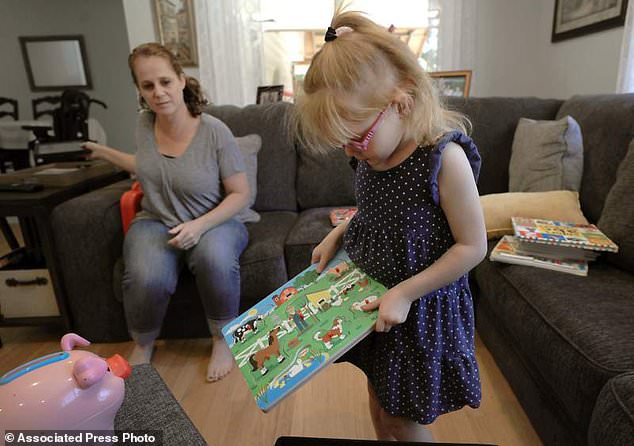 So far, a nurse who accompanies Brooke to school has had to apply the oil three times to treat seizure. Pictured: Brooke plays with her toys with her mother, Jana, in July 2018

On Friday, Judge Marson made the order permanent.

‘I was so overwhelmed with emotion and joy that we don’t have to fight anymore after a battle of over two years,’ Brooke’s mother, Jana, told The Press-Democrat.

‘She can just go to school like any other child and we don’t have to keep pushing to get what she needs.’

The family’s attorney, Joe Rogoway, said he hopes the ruling opens the door for other students who say they need to use a cannabis-based drug on campus for medical reasons.

District officials said they were reviewing the decision and haven’t decided whether to appeal.

Assistant Superintendent Cathy Myhers said the district is relieved to have legal guidance on the issue.

‘We are pleased with the decision and guidance,’ Myhers said. ‘We are happy to have a decision that supports our ability to educate and serve this student in our public schools.’

THE STATE OF MARIJUANA IN 2018

Marijuana is expected to have a big year in 2018 as advocates in several states move to legalize it for medical and recreational use.

Five states including Kentucky, South Dakota and Missouri are considering legalizing the drug for medical use, joining the 30 other states that have already done so.

At least four states including Delaware and Ohio are considering legalizing recreational marijuana, which is currently legal in nine states and Washington DC.