The devastated family of a young girl who died after being swept out to sea by a 5ft wave have paid tribute to their ‘darling, beautiful’ five-year-old and have launched a fundraising page to support her parents.

The girl, named locally as Rose Carter from Salisbury, died at Dorset County Hospital in Dorchester after she was rescued from the water at Durdle Door yesterday.

Rescuers rushed to save the youngster and a woman who was with her, believed to be her mother, but were only able to pull the adult ashore.

A Ministry of Defence military range safety vessel responded to a mayday signal and recovered the girl.

They rushed her to nearby Weymouth harbour where she was handed to a lifeboat crew who carried on resuscitation attempts, before transferring her to hospital where she was pronounced dead.

Rescuers rushed to save the girl and a woman with her, who were in distress in the water at Durdle Door, near Weymouth, but were only able to save to pull the woman ashore (stock image)

Grandmother Jen Carter has set up a Go Fund Me page and thanked friends and family for their support after the loss of their ‘beloved daughter and grandaughter’.

It said: ‘We have been overwhelmed with your offers of help and messages of love and support.

‘Many of you have asked what can you do, and whilst there is nothing that can take the pain of this loss away, there is one way you can help is with the costs of saying goodbye to our darling, beautiful girl and to help the family make a new start, whatever that may look like.’

The fundraising page has already raised £900 in just two hours.

On social media the distraught grandmother said: ‘As many of you will know, my family suffered a tragic loss yesterday of our beautiful girl, my youngest granddaughter.

‘Thank you so much for your messages of love and support. We are so thankful for all your prayers at this difficult time.

‘Many of you have asked what you can do to support the family.

‘Right now, with our pain so raw, and our hearts aching, please allow us time to grieve and give us some space.

‘If you would like to express your love and support for the family as they struggle to understand all that has happened, you can do so in a very practical way, through a GoFundMe to help them financially at this difficult time.’

Witness Tee Medway, from Southampton, Hampshire, was on holiday in the area with her husband Paul.

She later posted on Facebook: ‘She was paddling with her mother and a wave took them both.

‘They were playing in the waves as they came up the beach. Tide was going out when the girl was taken and the water was so rough.

‘A bystander grabbed the woman but they couldn’t get to the little girl. I was on the phone with the coastguard the whole time.

‘I couldn’t stop crying but there was nothing we could do. The screams will haunt me and my husband.’

Durdle Door, famous for its rocky archway landmark, is a popular destination for families in the summer. There is a campsite close to the bay.

Holidaymaker Basia Sopel, from Warrington, Lancs, was on the beach when it happened but wasn’t aware there had been a tragic accident until the guards said they were closing the beach.

She said: ‘I noticed three boats and the helicopter but I didn’t really see anyone going into the water.

‘The waves were really strong and the sea was quite loud. I didn’t notice anyone shouting for help. 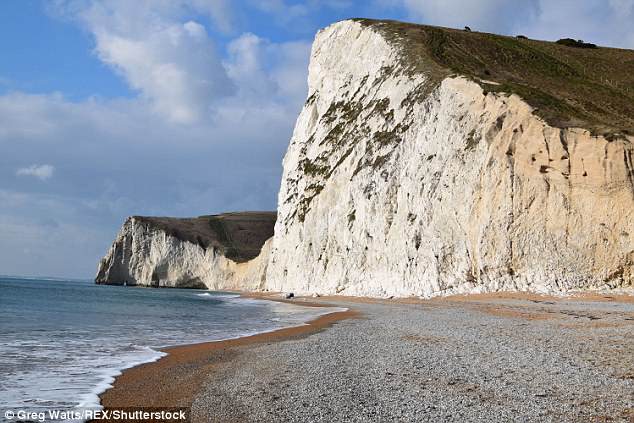 A Ministry of Defence military range safety vessel responded to a mayday signal and recovered the girl before she was transferred to Dorset County Hospital, where she was pronounced dead

‘The guards came and asked everyone to leave because they were closing the beach, I think that was about half 12 and it was closed until some time after 5pm.

‘When I asked why they were closing it he said a girl was swept into the water.

The weather station at Weymouth recorded sea swells of about 5ft between 11am and midday yesterday.

A local fisherman, who didn’t want to be named, said: ‘The swell was quite big and it was high spring tides, which means when the tide turns it is higher than normal.

‘Although it looked like a lovely day, the sea state wasn’t very good.

‘It’s a real tragedy but I can see how an accident like that would happen, given what the conditions were like.

‘To someone who doesn’t know the sea and the coast well, you wouldn’t realise how big the swell is.’

Another eye-witness, Melanie Hamilton-Duthie, said the sea was ‘rough’ at the time.

She said: ‘We were there just after it happened.

‘The sea was rough, such a beautiful place, you can sometimes forget how powerful the sea is. It is so sad.’

Visitor Nicola Walker added: ‘The sea was extremely choppy my son was paddling and fell in and you could see how strong the undercurrent was.’

Although Dorset police is investigating, they are treating the death as a tragic accident.

Detective Inspector Steve May, of Dorset Police, said: ‘Our thoughts are with the family of the young girl involved at this very difficult time.

‘At this time there is nothing to suggest this was anything other than a tragic accident however, with the sudden death of any child we have an obligation to carry out an investigation to establish the full circumstances of what happened.

‘I am appealing to anyone who witnessed how the girl came to be in the water and has not already spoken to police to contact us immediately.

‘There were also a number of visitors in the area at the time and I am appealing to anyone who may have filmed or photographed the incident to please get in touch as it may assist our investigation.’

Ken Francis, of the Weymouth lifeboat, said: ‘We are all very upset about what happened. It is a tragedy for a young one to lose their life and our thoughts are with her family.’

A GoFundMe page has been set up in tribute. Please click here.