Girl gifts boyfriend shoes with her face on them

Finding the perfect gift for a significant other can be a tough job for many couples, especially when it comes to treading the line of sentiment and practicality.

However one California teenager nailed the perplexing gift hunt right on the head, and figured her boyfriend would love nothing more than her image to carry around with him forever as a four year anniversary present. So Nancy Villatoro, 18, did just that by customizing a pair of slip on shoes with a blown up picture of her face.

Nancy, of Bakersfield, recorded her boyfriend Jeremiah DeLeon, 19, unboxing his personalized gift, capturing his priceless reaction to the shoes, which saw him leaping up and down in joy, before immediately trying them on for size.

What could it be? Nancy Villatoro, 18, bought her boyfriend Jeremiah DeLeon, 19, a surprise gift and he couldn’t wait to open it in a viral video with 14,000 retweets and 59,000 likes 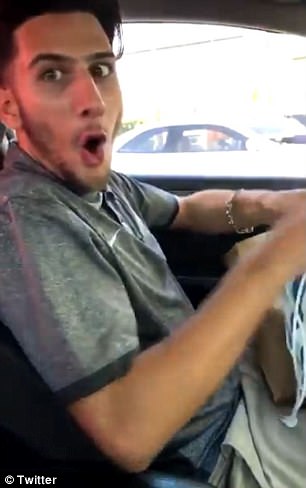 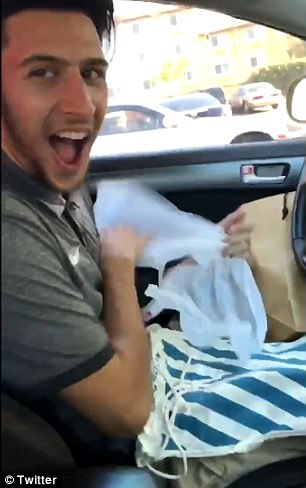 Shocked! Once he saw the brand Vans bag his mouth dropped with excitement and he shouted that he already knew what it would be, and scrambled to see his brand new pair of kicks

‘He can throw all his other shoes away now,’ she captioned the adorable video, posted October 20, which has Twitter users head over heels for the heartwarming reaction and has racked up 14,000 retweets and 59,000 likes.

The video begins with Nancy and her boyfriend sitting in a car where she hands him a bag and encourages him to open it.

Jeremiah, her happy-spirited boyfriend, then plays around with the bag and his eyes pop and jaw dramatically drops when he takes out the shoe string back.

‘It’s your face, it’s your face! I’m going to wear these right now!’ he adds in his freak out reaction.

The teen opens that bag to reveal two black Van slip on shoes, customized with Nancy’s super large photo running along the top of the canvas sneakers.

If the shoe fits! Nancy shared the viral video on Twitter joking that now her boyfriend can toss out all his other shoes and stick to these personalized soles instead 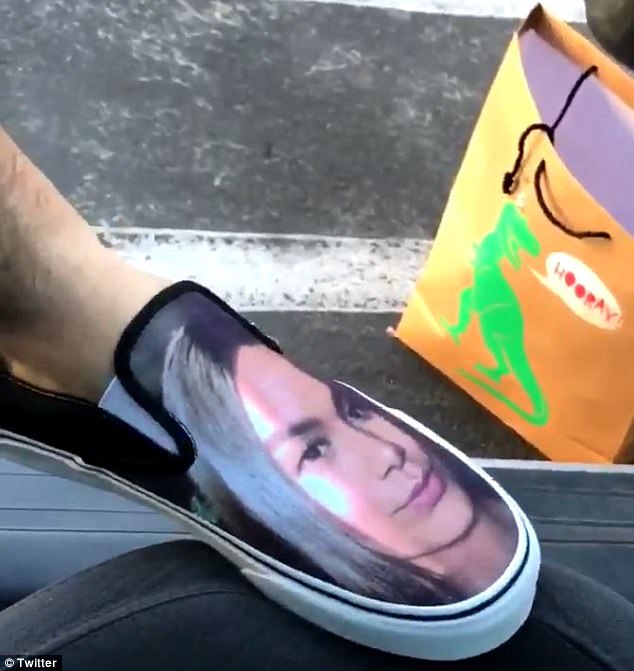 Together forever! The shoe revealed Nancy’s sulty selfie emblazoned along the top of the Vans slip on shoe so that Jeremiah can think of his girlfriend with every step he takes 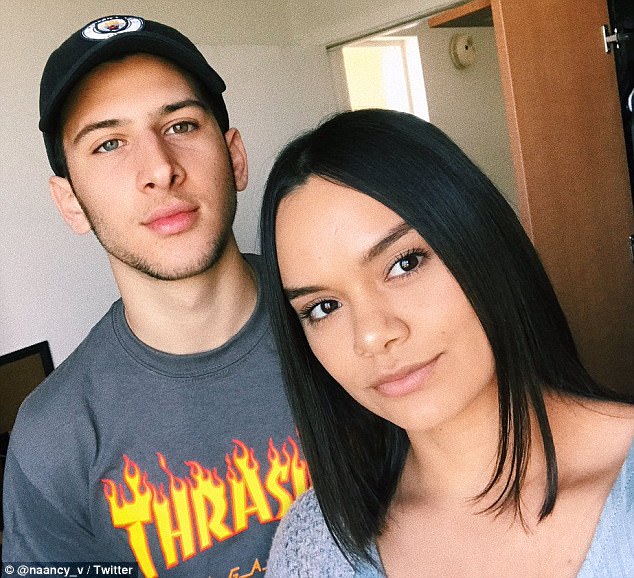 Couple goals! Jeremiah and Nancy share multiple affectionate posts on their social media pages, but the viral video of the personalized shoe takes the cake as the cutest couple moment 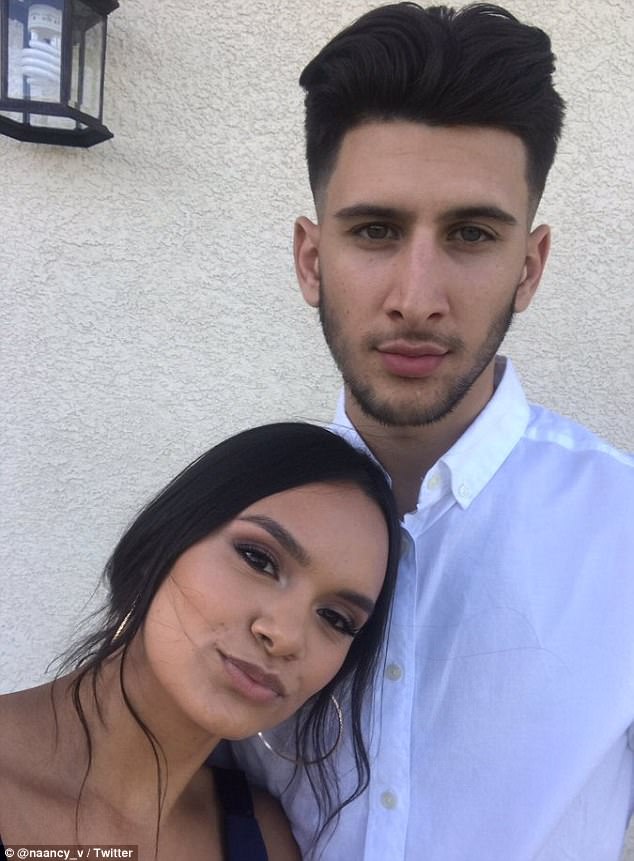 Smize! The couple (above) inspired other pairs to do the same and the Twitter thread reveals many lovers tagging their significant others as a call for similar presents

Without any hesitation the teen hops up and out the car enthusiastically to try on his new shoes.

He takes a dramatic stroll through the parking lot where the car is stationed and after a full circle strut, he perches his foot on the car seat for the camera to see his shiny new shoes with model-like flair.

The shoe reveals Nancy’s pink hued pout selfie along the entire top of the shoe, taking Nancy with Jeremiah anywhere he goes, step by step.

When she sees her gift on him, Nancy is confident she got the right gift and gives a confident ‘Yes!’ on his model and her stellar gift choice.

‘I got them for our four year anniversary that was in September and he had talked about how he wanted a shirt with my face on it but he’s really into shoes so when I saw that you could customize Vans I thought it would be perfect!’ Nancy shared to Daily Mail Online.

She knew he’d like the gift, but had no idea just how overjoyed his enthusiastic reaction would be.

‘I didn’t think he would be so excited I mean I knew he would love them but I wasn’t expecting his reactions,’ she expressed.

Twice as nice! The shoes not only work as a conventional gift, but they double as a daily reminder of Jeremiah’s girlfriend, even when she’s far away

Slay! Twitter users were melted by Jeremiah’s adorable positive reaction to the sneakers 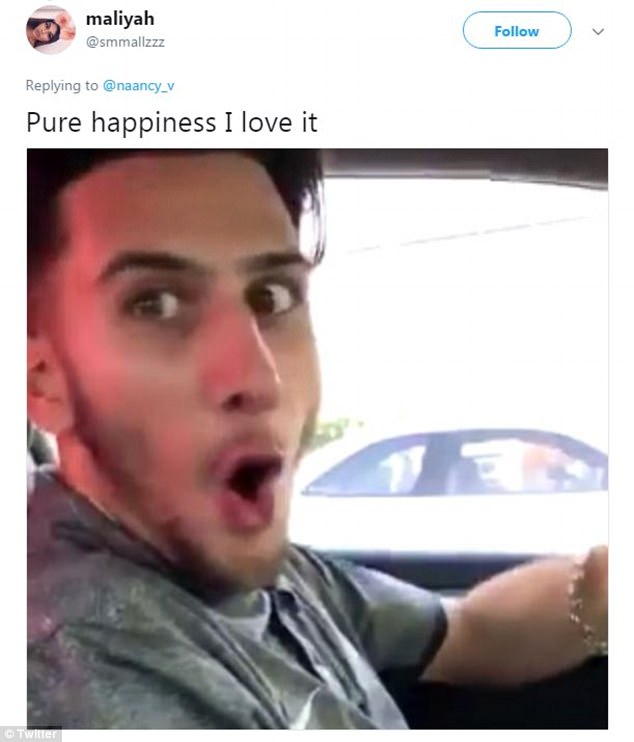 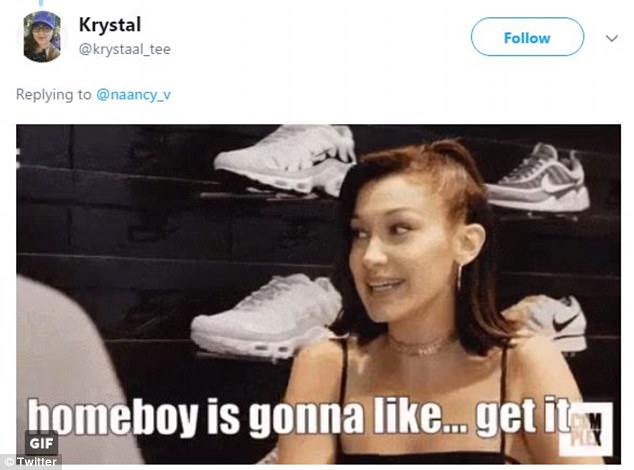 Get it! Fans used the shoe gift as a way to poke fun at Bella Hadid’s sneaker video

The couple love to share a myriad of posts together on their social media to celebrate their love, and Twitter couldn’t help but chime in on the gift fun.

‘Pure happiness I love it,’ another shared.

But there were some ready to stir drama and critiqued her photo choice.

‘That was the best selfie you had? Could at least picked one with a Snapchat filter,’ one opinionated user shared.

But others were quick to come to her defend and express that the couple’s love was stronger than the simple photo.

‘Because he actually loves his girl and gets super hyped over her and appreciate what she does for him? I see why you’re single,’ a defensive Twitter user wrote.

While people fawned over the romantic gesture, other couples were taking notes and tagging their significant others suggesting similar gifts for themselves.

As for the teens in love, they’re shocked by the online buzz Jeremiah’s reaction has received.

‘I honestly wasn’t expecting people to like the video so much but I love that people loved his reaction so much,’ Nancy shared.

With fans drooling over the hilarious and sentimental shoes left and right, it’ll come as no surprise if these customized kicks gain instant popularity in more online posts such as Nancy’s and on the fashion street.

Loyal! But fans were quick to retort that the couple’s genuine love and appreciation is much more important than the girlfriend’s photo choice 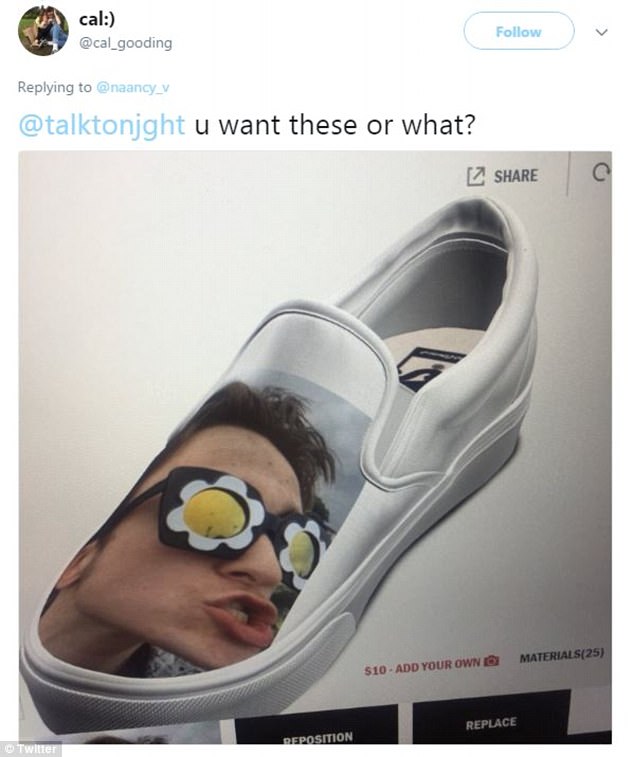 Me too! Other couples hopped on the customized shoe train with their own hilarious photos