Girl in surrogacy case where her birth mother refused $10,000 to have an abortion dies

The young girl who made headlines because her surrogate mother refused $10,000 from the biological family to have an abortion has died.

On July 15,  Seraphina Nayleigh Harrell died at Boston Children’s Hospital from complications related to an infection and needed surgery.

She and her family of 10 had celebrated her eight birthday just two weeks ago on June 25.

‘Still can’t believe I have to talk about my baby in the past tense,’ wrote Rene Harrell, the child’s adoptive mother, on Facebook.

‘Still trying to figure out how daily life is supposed to work without her in it.’

Thomas Harrell, her adoptive father, said ‘For the eight years she lived, she had a full life.’

‘She had a lot of joy in her life and gave a lot of other people joy in ways that sometimes weren’t expected.’

Seraphina Nayleigh Harrell (pictured) died at Boston Children’s Hospital in Massachusetts on July 15, just after she turned eight-years-old in June

In 2011, a couple hired Crystal Kelley, then 29, to be a surrogate after they had trouble conceiving children.

A playground meeting in Vernon, Connecticut, saw Kelley agree to carry their fourth child for next nine months.

Doctor’s soon thawed out two frozen embryos left over from the couple’s past in-vitro fertilization procedures and put them in Kelley’s uterus in October 8, 2011.

But in 2012, a five-month pregnant Kelley underwent a routine ultrasound that showed Seraphina suffered from a cleft lip and palate, a cyst in her brain and severe heart defects.

Serpahina had holoprosencephaly, a birth defect where the brain does not fully divide into separate hemispheres.

She also had heteotaxy, which meant several of her internal organs were in the wrong place. She had at least two spleens. 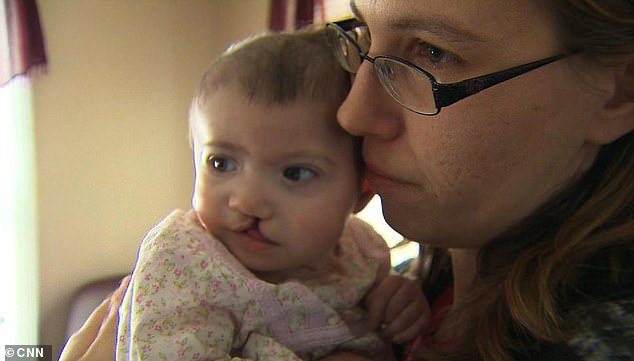 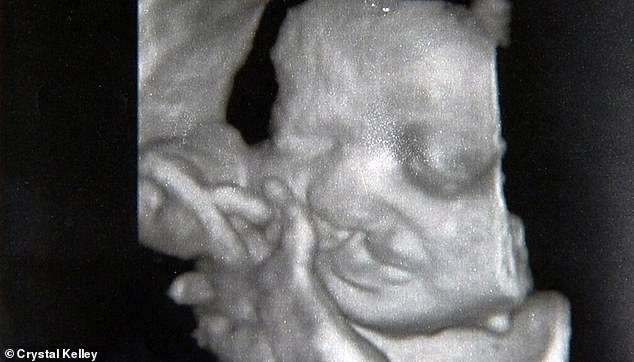 Pictured: an ultra sound taken during Kelley’s pregnancy showed Seraphina in the womb with a cleft lip 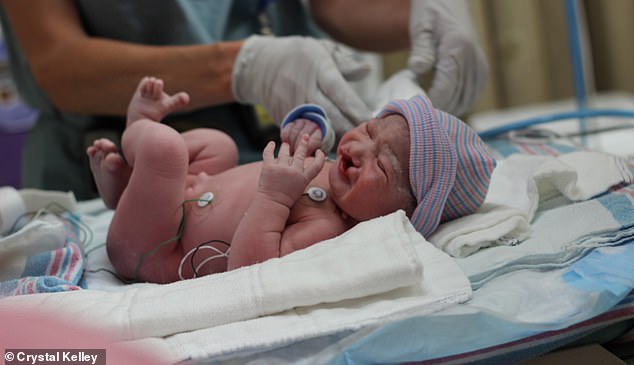 Amid an ongoing legal battle between Kelley and the biological family, Seraphina was born in Michigan on June 25

Previous ultrasound technicians had noted that Seraphina’s stomach or spleen were hard to see.

A panicked phone call from the the couple would spark a landmark abortion case that captivated America.

Doctors explained that little Seraphina would likely survive the pregnancy, but would only have a 25 percent chance at a ‘normal life’ and would need to undergo several heart surgeries.

The couple, not wanting to subject the child to a difficult life, wanted Kelley to terminate the pregnancy.

‘Given the ultrasound findings, (the parents) feel that the interventions required to manage (the baby’s medical problems) are overwhelming for an infant, and that it is a more humane option to consider pregnancy termination,’ read a letter written by Kelley’s midwife and a genetic counselor.

The couple’s first three children were all born prematurely, with two of them spending months in the hospital and continued medical issues.

But Kelley adamantly disagreed and wanted to keep the child alive.

‘Ms. Kelley feels that all efforts should be made to ‘give the baby a chance’ and seems adamantly opposed to termination,’ the letter read.

The two sides were caught in a standoff that ended with Kelley moving states after the couple offered to pay her $10,000 to have an abortion.

Kelley did not want to raise a child, but was morally and religiously against abortions. Both sides lawyered up and argued over what was the best course of action for Seraphina.

Eventually the couple changed their minds about the abortion and instead wanted to exercise their legal right to take custody of the child – but would enter her into Connecticut’s foster care system immediately afterwards.

Subsequently, Kelley moved to Michigan, where state laws allowed her to be the legal parent and not the couple who hired her.

‘Once I realized that I was going to be the only person really fighting for her, that Mama bear instinct kicked in, and there was no way I was giving up without a fight,’ said Kelley at the time.

On June 25, Seraphina was born at full-term at six lbs and nine ounces.

Kelley gave Serpahina up for adoption and she was taken in by the Harrell family in Massachusetts. 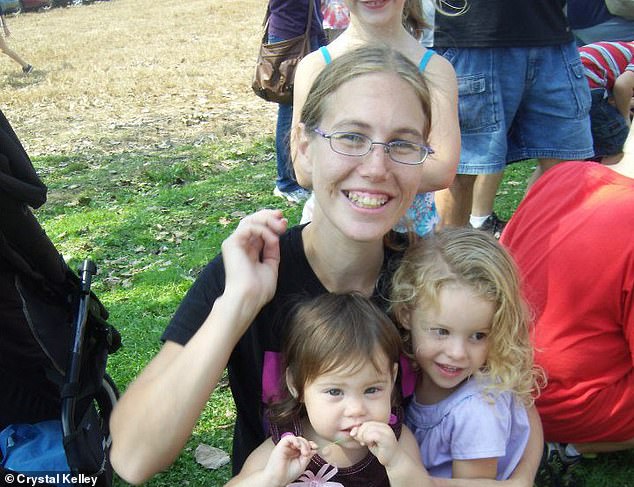 Kelley (center): ‘Once I realized that I was going to be the only person really fighting for her, that Mama bear instinct kicked in, and there was no way I was giving up without a fight’

The impasse between the couple and Kelley helped surrogacy agencies change the protocols they follow when making such arrangements.

‘People heard about this case, and they got scared about skipping steps. That’s good for the industry,’ attorney Melissa Brisman told CNN this week.

Now, couples and surrogates take much more precaution and make sure they’re on the same page about important issues.

A memorial service for Seraphina was held on Sunday afternoon in Andover, Massachusetts, at a field adjacent to Chapel at West Parish.

Rene Harrell asked that guests to wear face masks in honor of the young girl.

‘COVID-19 has interrupted a lot over the past few months, and it wouldn’t be very honoring of Seraphina’s memory to put people at risk of contracting it,’ wrote the child’s biological mother, Rene Harrell, on Facebook.

‘Because the Commonwealth considers this a large “unenclosed outdoor area” with enough space to practice social distancing, there are no regulations limiting attendance or requiring mask usage, but we are requesting that everyone planning to come wear a mask and will provide them for anyone who doesn’t have one.’ 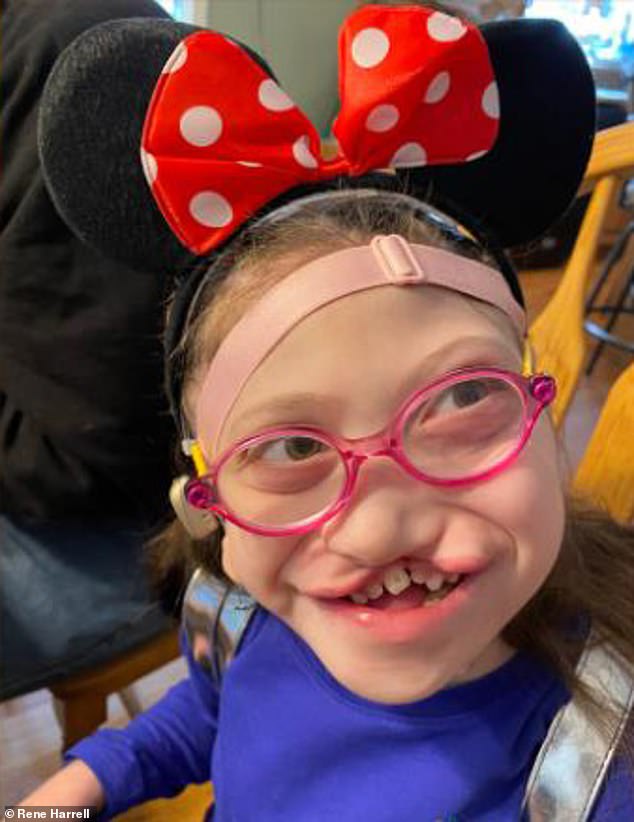 A memorial service was held for Seraphina (pictured) on Sunday in Andover, Massachusetts, and guests were asked to abide by CDC health guidelines

Seraphina will be remembered for living a full and joyous life in spite of her medical conditions.

‘What I heard over and over from so many of her doctors was they could never imagine that someone with Seraphina’s level of need could do as well as she did or be as joyful as she was,’ Rene told CNN.

Rene added that the life Seraphina led in Massachusetts, surrounded by friends and loved ones, proved it was worth saving.

‘What drove the conflict when Crystal was pregnant with her, was whether or not she’d have a meaningful life,’ said Rene.

‘And I think without hesitation, the answer to that question is yes, she did. Seraphina had a very, very meaningful and happy life.’

Seraphina could only speak a few word, but learned American Sign Language to communicate. She also could not walk, but was constantly moving around in her wheelchair. 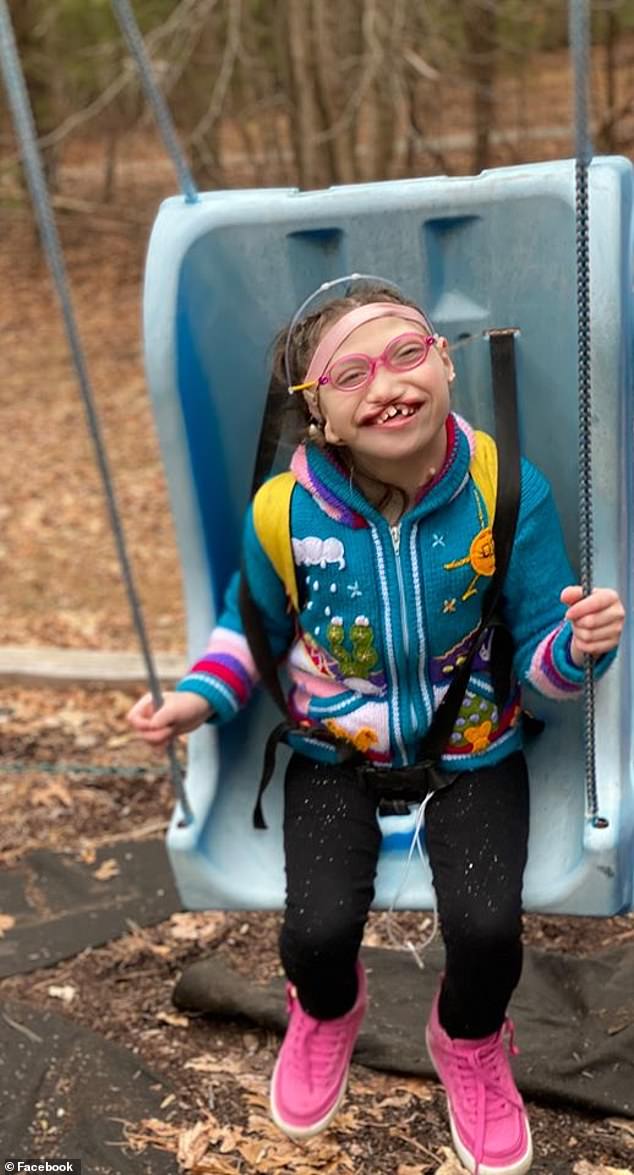 Seraphina grew up in a loving Massachusetts home with seven other siblings, some of which also had medical issues and disabilities

‘She could get herself around in a power wheelchair like nobody’s business,’ said Rene.

Seraphina’s favorite word, according to Rene, was ‘I love you.’

‘She’d sign it and always add a little kissing sound. She was so loving. If you looked sad, she would comfort you,’ said Rene.

‘If you got even the slightest little poke, she would sign ‘sorry’ and then kiss your boo-boo.

‘When her baby cousin cried, she would sign ‘Baby, cry, Mama, milk.’

During Halloween 2018, Seraphina’s seven older siblings masqueraded as the seven dwarves and gave her a special name: Bossy Dwarf.

‘She had the most confident, self-assured personality, and she told everyone what to do,’ said Rene. 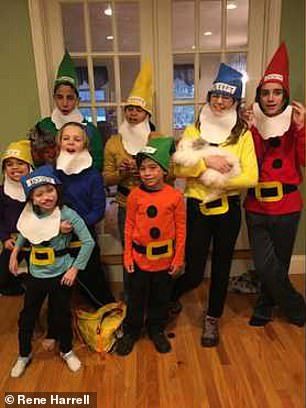 For Halloween 2018, the Harrell children dressed up as the seven dwarves and called Seraphina (far left) Bossy Dwarf

Serpahina shared a remarkable bond with her siblings and enjoyed doing different activities with each.

‘Nora and Nathan read to her. Laney painted her nails. Derecc played Darth Vader wars. She fought with the nine-year-old twins. Clare was her true playmate, because even though she is 18, in practice she and Seraphina were both around three, so they liked the same things,’ said Rene.

It wasn’t unusual for Seraphina to order Nathan, her 10-year old brother, to read Little Critter books to her.

Nathan would say he was the big brother character and Seraphina was the little sister.

‘They all miss her terribly. She was the centering part of our family. She was our heart and soul,’ said Rene.

Loved ones who knew Seraphina said her life wasn’t defined by her illnesses – it was love.

‘There is just no getting around acknowledging the heartache of those who love her the most, who truly weren’t ready to see her go.’ read the obituary.

‘But truth is, sadness is not the defining sum of Seraphina’s story…love is. Seraphina’s larger than life personality only grew throughout her life, and you never had to guess what she was thinking or feeling.

‘At least once a day, someone would snuggle up to her and repeat the Seraphina family motto: “For a girl who can’t talk, you sure are never quiet!’