Girl is called a ‘fat kid’ despite having a rare illness

A four-year-old girl, who weighs the same as a child of eight, is cruelly called a ‘fat kid’ by strangers, despite having a rare illness that means she will only get bigger.

Emily Heap’s parents Emma and Roger, both 50, from Northampton, receive judgmental looks from people when feeding their daughter in public.

Ms Heap, a former doctor and now Emily’s full-time carer, said: ‘I know that Emily is the weight of an eight-year-old, but the height of a four-year-old and, to a lot of people, she just looks like a fat kid.

‘Until recently, she struggled to walk, partly because of her size, but also because she has low muscle tone. We had to take her around in a pram and people were always judging her as just being too fat to walk.

‘None of this is Emily’s fault; there’s nothing we can do to stop her body piling on weight.’

Emily, who was born without a pituitary gland, was diagnosed with a condition known as septo-optic dysplasia when she was just six months old. Katie Price’s son Harvey is also a sufferer.

It means her body is unable to breakdown fat, resulting in her being severely overweight, despite her calorie-controlled diet.

Her mother, who worries Emily will be bullied when she is older, is fundraising for a half marathon for the Pituitary Foundation charity.

Four-year-old Emily, who weighs the same as a child of eight, is cruelly called a ‘fat kid’ by strangers, despite having a rare illness that means she will only get bigger 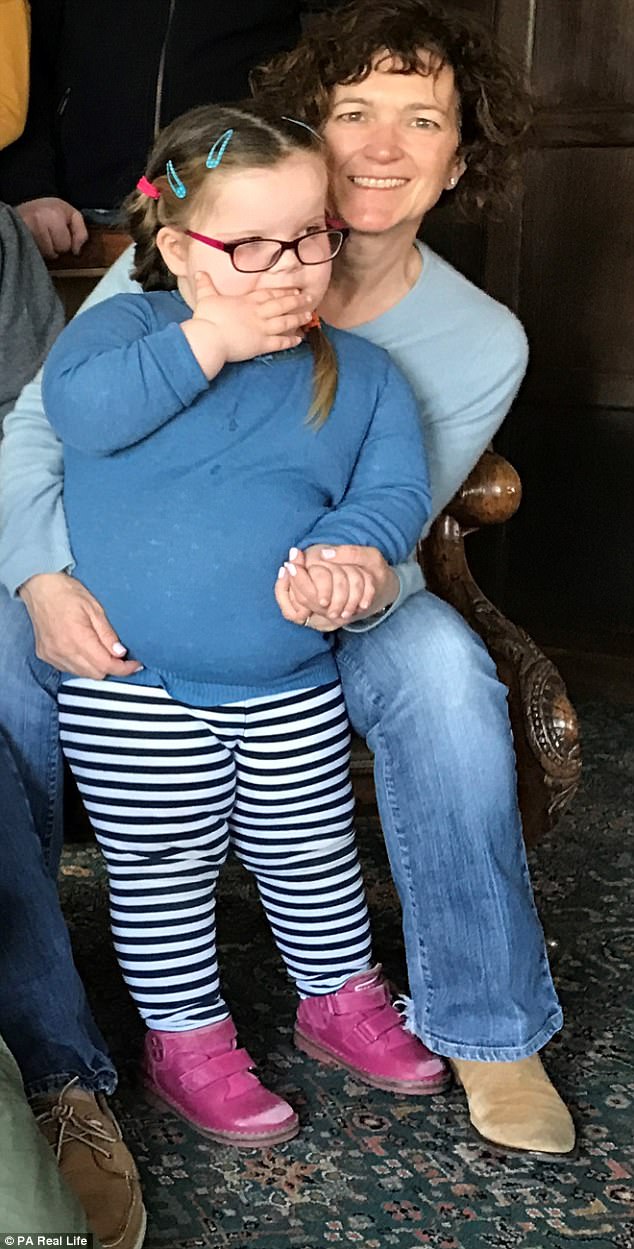 Her mother Emma, 50, (pictured) receives judgmental looks from people when feeding Emily in public. She says her daughter’s body ‘clings to fat’ despite being on a controlled diet 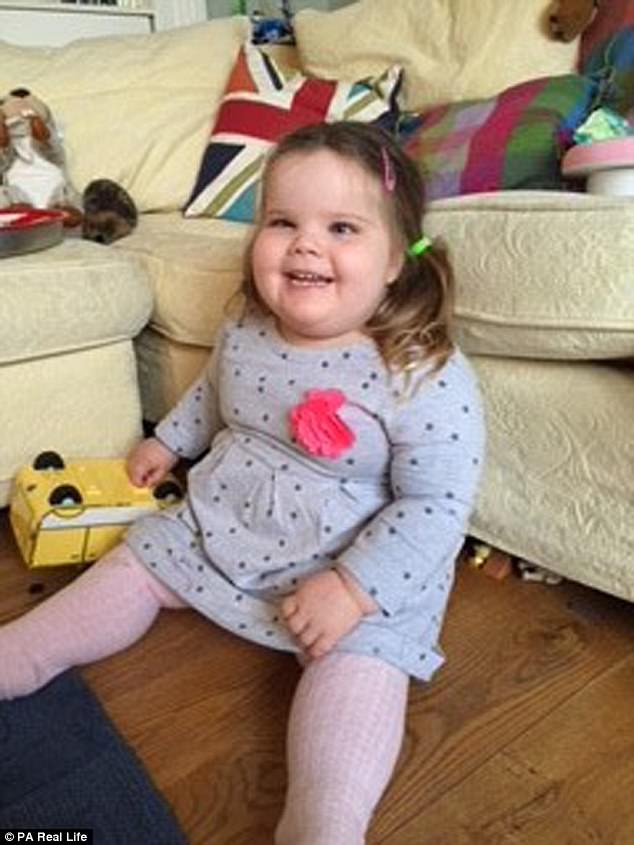 Emily’s obesity puts her at risk of type 2 diabetes. She already suffers from visual impairment

WHAT IS SEPTO-OPTIC DYSPLASIA?

Septo-optic dysplasia is defined as a child suffering from two or more of the following: underdevelopment of the optic nerve, problems in the centre of the brain and pituitary gland abnormalities.

It affects around one in every 10,000 births. One-third of cases suffer all three of the aforementioned conditions.

Septo-optic dysplasia’s cause is unclear but may be genetic.

Symptoms vary substantially between patients with some suffering visual impairment and stunted growth, and others having delayed speech and poor co-ordination.

Treatment focuses on artificially replacing hormones that are not being produced.

‘Her body just clings onto fat’

Ms Heap, who is also mother to Sam, 10, realised just three hours after Emily was born by caesarean section on May 14 2013 at Oxford’s John Radcliffe Hospital, that there was something wrong, when she went floppy in her arms.

She said: ‘Emily was with me and had been feeding, but then went to sleep and just wouldn’t wake up.’

After the youngster was rushed off to a special care baby unit, Ms Heap, who was still recovering from her c-section, had to wait until the following morning to see her little girl again.

She said: ‘She had been fine, but then the next time I saw her, she was in an incubator, struggling to breathe. The doctors had no idea what was wrong with her, or why that had happened.’

It took doctors six weeks to realise Emily’s pituitary gland was not functioning properly, resulting in her not producing the hormones she needed to make her body work at its best.

Ms Heap said: ‘When I was pregnant, my hormones were keeping her going, but as soon as she was born, she had no reserves.’

When Emily was just six months old, a scan revealed the youngster had been born without a pituitary gland.

She was diagnosed with septo-optic dysplasia, which makes her body unable to breakdown fat, resulting in her being severely overweight, despite her calorie-controlled diet.

Ms Heap said: ‘When she was diagnosed, they told us about the weight gain. I think, at that stage, we thought it was the least of our worries, but as she’s got older, we’ve realised that is a huge problem, as her body just clings onto fat.

‘No matter what she eats, or how much she exercises, her body doesn’t have the ability to break it down.’ 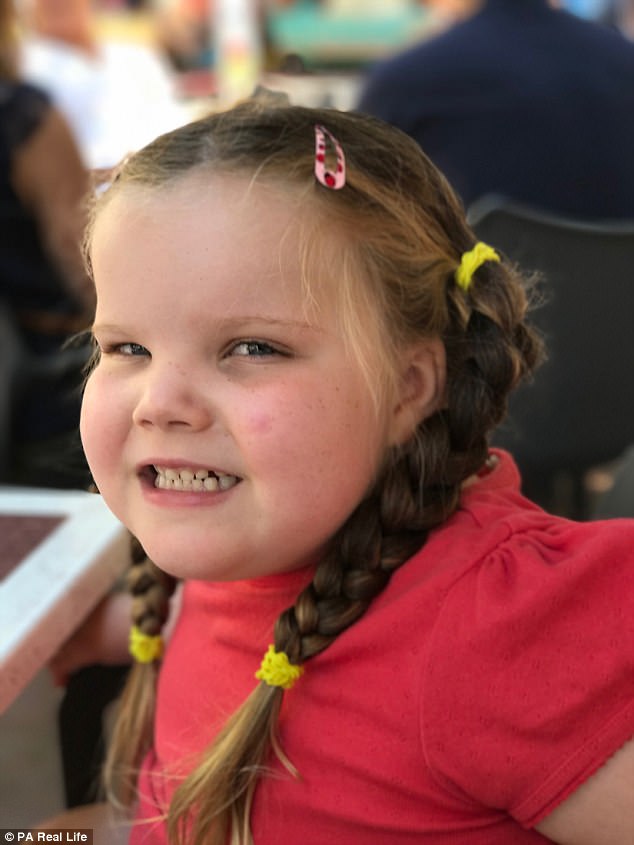 Emily, who has been on medication her whole life, thinks her condition and size are normal 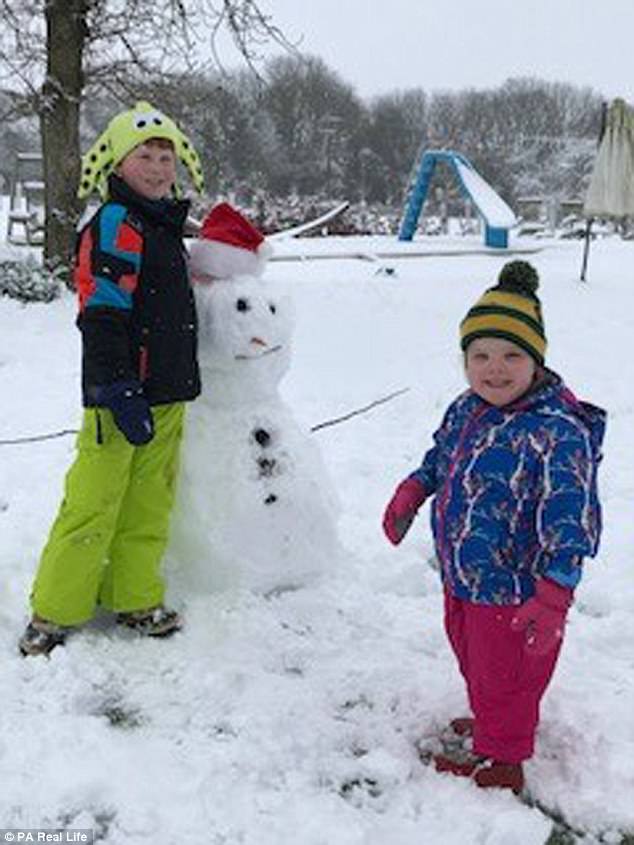 Ms Heap says Emily is fun and feisty despite her illness (pictured with her brother Sam, now 10) 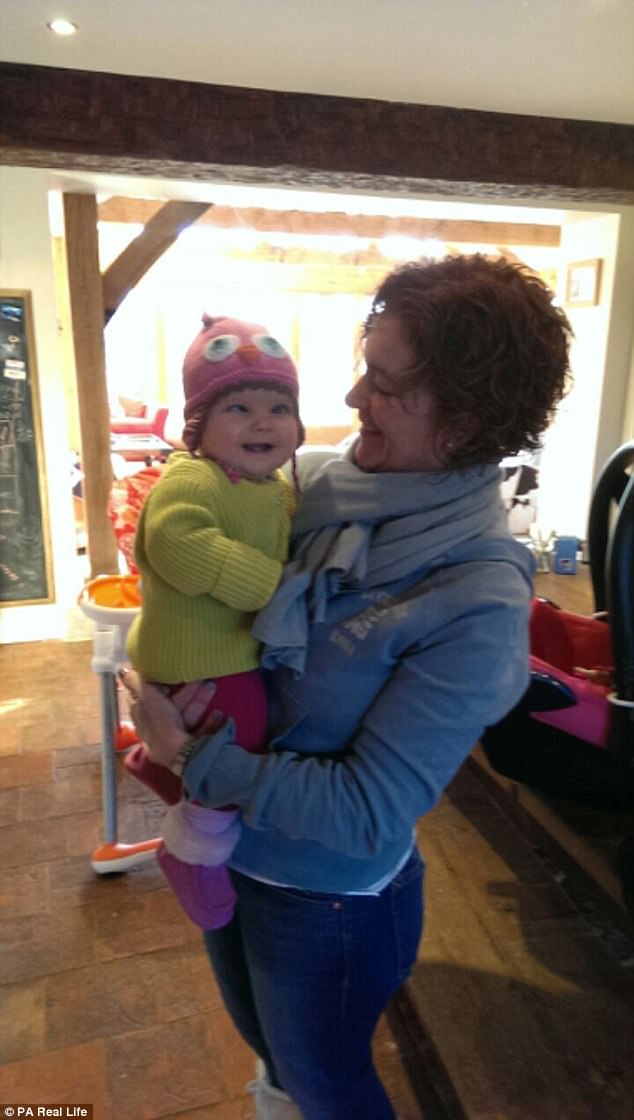 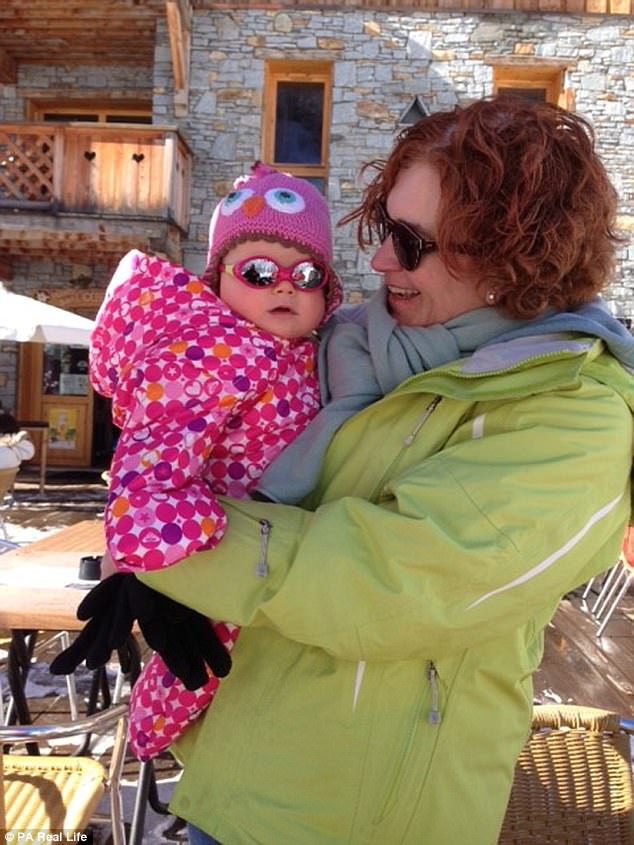 Emily does not notice people staring at her in public, however, her mother finds it difficult

WHAT CONDITIONS DOES KATIE PRICE’S SON HARVEY SUFFER FROM?

The teenager, whose father is the footballer Dwight Yorke, weighs around 18 stone, which is more than double that of a healthy boy his age.

Katie, formerly known as Jordan when she worked as a glamour model, has previously said her son is very close to developing type 2 diabetes.

Prader-Willi syndrome is a constant desire to eat food driven by persistent hunger, which can lead to dangerous weight gain.

Children sufferers often die due to their stomachs exploding or choking while hurriedly eating.

Katie, who also has son Junior and daughter Princess with ex-husband Peter Andre, as well as son Jett Riviera and daughter Bunny with her third husband Kieran Hayler, says Harvey tries to steal food from the plates of her other children.

‘She’ll be judged by the outside world’

Ms Heap worries about how Emily’s obesity may affect her health.

She said: ‘She is at huge risk of type 2 diabetes and if she had that on top of everything else, it would just make everything more difficult.

‘We are discussing whether to start her on some anti-diabetes medications. I also worry about her developing heart problems.’

Fortunately, Emily has not experienced any mental impairment and started at a mainstream school in September.

Ms Heap added: ‘She loves school, but it is difficult for a small local school to get their heads around Emily’s medical needs. Her vision has also been affected. She can see but she needs a larger font. She is doing really well though.

‘Emily is so much fun – really smart and feisty – and to her, this is just normal life.’

Although Emily takes everything in her stride, her mother also worries what other children will say to her as she gets older.

She said: ‘Emily doesn’t think there is anything different about her. She has had medicine her whole life and that makes her feel normal. She loves Peppa Pig and when she sees Daddy Pig she says, “My tummy is made of pure muscle like him”.’

‘I do worry about when she is a little bit older, in case other kids start being horrible to her. She’ll be judged by the outside world, because of her size. I know it will happen and there’s nothing I can do about it, other than give her as much strength as I can.’

Ms Heap already often sees people staring at her family when they eat together in public.

She said: ‘Emily is hungry all the time. She constantly asks for food and I have to have a really carefully controlled, low-calorie, small-portion diet, so when we go out, I take food for her.

‘We will sit in a cafe having lunch and I will see people staring at her eating and judging her for her size. I don’t think she notices yet, but I find that difficult.

‘I know that Emily is the weight of an eight-year-old, but the height of a four-year-old and, to a lot of people, she just looks like a fat kid.

‘Until recently, she struggled to walk, partly because of her size, but also because she has low muscle tone. We had to take her around in a pram and people were always judging her as just being too fat to walk.

‘None of this is Emily’s fault; there’s nothing we can do to stop her body piling on weight.’

The family have received support from the Pituitary Foundation and Ms Heap is planning to run the London Landmarks Half Marathon to raise money for the charity. 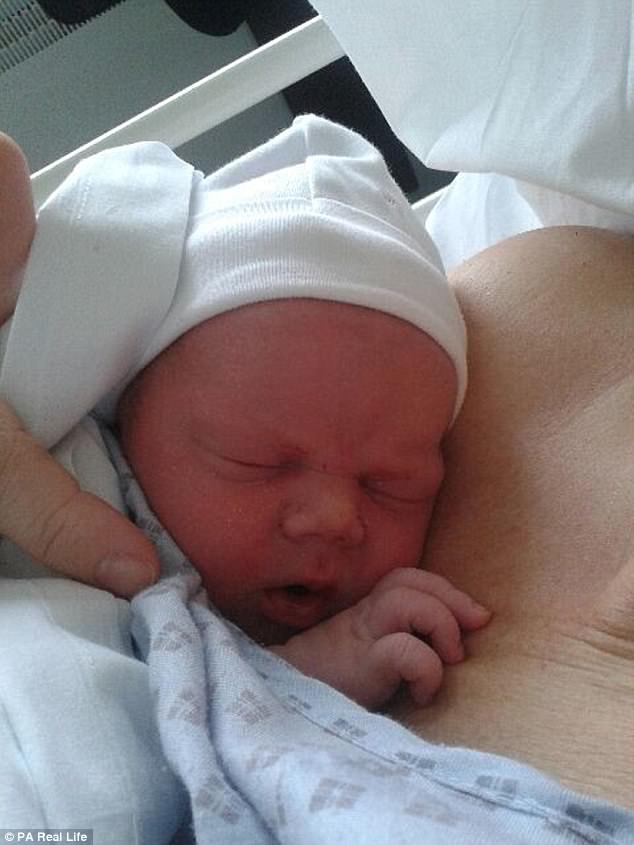 Ms Heap, a former doctor, first noticed something was wrong when Emily was born floppy 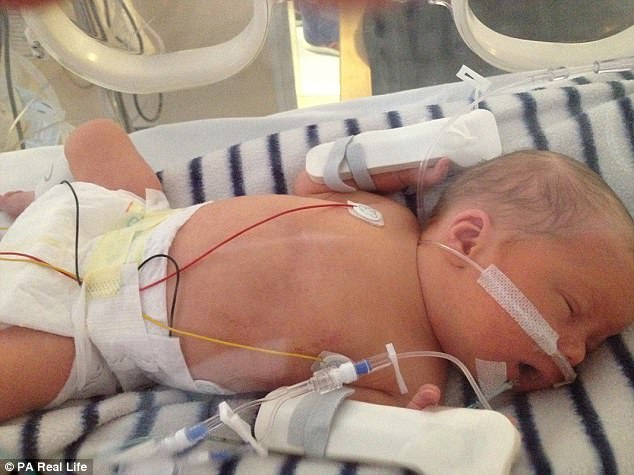 After being rushed to intensive care, it took doctors six months to diagnose her condition