A girl has died and her mother is missing amid massive tornadoes that ripped through the southern United States on Tuesday as a major storm continues to make its way through the country.

Louisiana’s Caddo Parish Sheriff reported late Tuesday night that multiple mobile homes were destroyed in the area and even a local forest was mowed down as the tornadoes ripped through the neighborhood.

One woman was taken to a local hospital in the aftermath, KSLA reports, and two people were reported missing.

But around 11.30pm search efforts paid off, with Sheriff Steve Pator confirming that the child’s body has been found, but her mother is still missing.

Deputies are now continuing to go house-to-house to check on the welfare of the parish’s residents, as a dangerous storm continues to make its way through the central United States after already injuring 22 people in Utah and setting off at least five twisters in Texas. 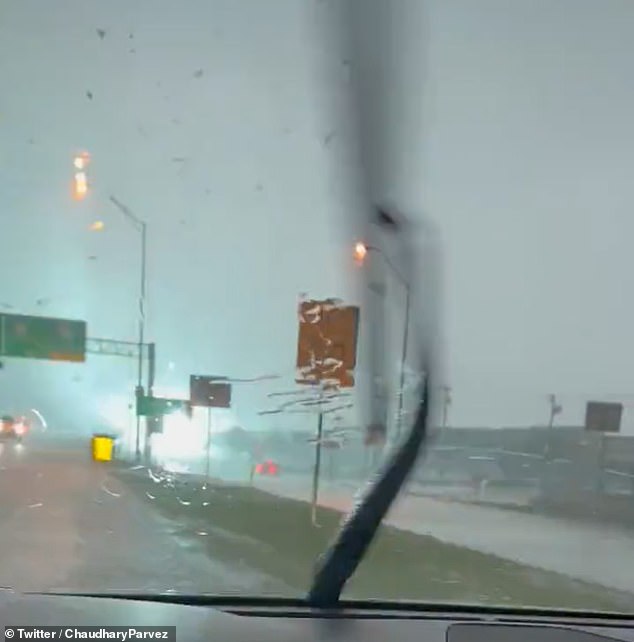 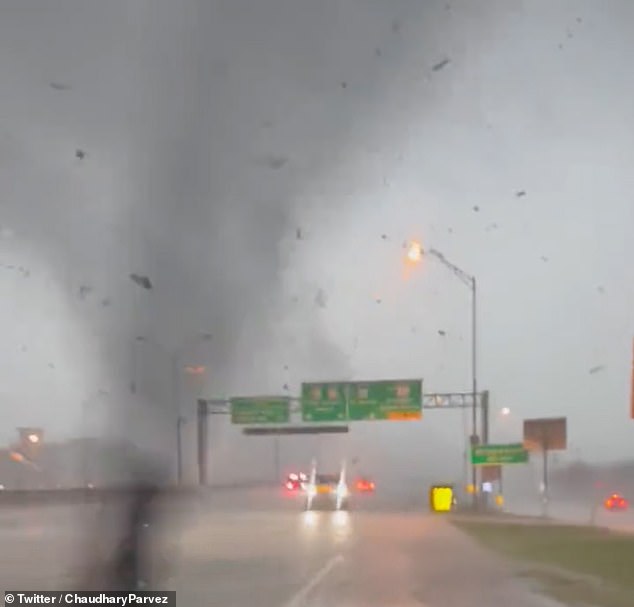 Videos posted online showed motorists trying to avoid the storms, which sent torrential downpours and twisters to the area

At least 10 million people across the United States are now under winter-weather watches or advisories as the great storm continues to push northwards.

It has already set off at least five tornadoes in Texas on Tuesday alone, though experts suspect there may have been even more that have not yet been confirmed.

Three of the twisters were reported in Tarrant County, according to the National Weather Service center in Fort Worth, with the strongest having an EF-1 rating, which means they sustained wind gusts of 86 to 110mph for at least three seconds straight.

The city of Grapevine, near Dallas-Fort Worth International Airport, also reported an EF-2 tornado with wind gusts of 125mph that left up to five people injured and damaged businesses including a local mall, a Sam’s Clubs and a Walmart.

Gas stations were also destroyed, and drivers on one road were forced into a single lane due to the downed trees and blocked parts of the road.

A smaller tornado was also reported just west of the city of Paris.

Videos posted online showed the extent of the wind gusts as debris lifted into the air and the skies darkened in the middle of the day.

Officials will survey the damage in those areas on Wednesday.

But, based on radar and damage reports, the National Weather Service says it expects there could have been as many as 12 tornadoes that have not yet been confirmed in the area. 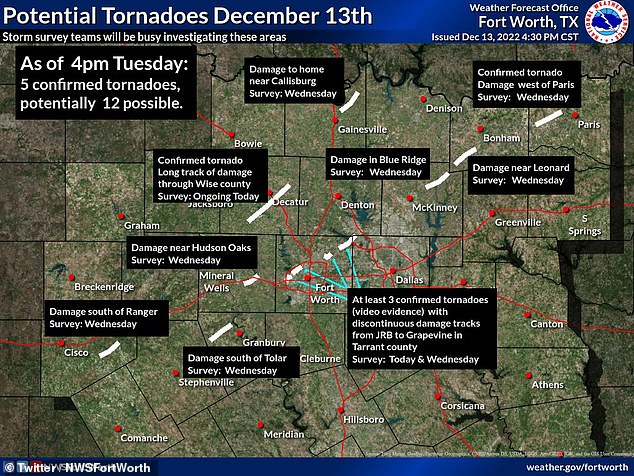 At least five tornadoes have been reported in Texas, though experts say there could be up to 12 that have not yet been confirmed

The storms carved a path of destruction through Oklahoma and the Dallas-Fort Worth area injuring at least seven people, with two reported injuries occurring right outside of Dallas.

Authorities say one person was injured when the high winds overturned their car, while the other — who was also in a vehicle at the time — was injured by flying debris in Wise County.

They noted that one of the individuals was brought to a local hospital, but they did not specify which one.

The high winds also damaged trees and homes in Callisburg, north of Dallas, blew over tractor-trailers near Millsap and Weatherford and damaged barns near Jacksboro.

The homes there were seen flattened with their roofs torn off and trees snapped like twigs after the twister remained on the ground for at least three miles with wind gusts of up to 125mph.

The storm system is now threatening to create even more damage in the south and blizzard conditions in the north.

In Nebraska, a ‘one-in-five-year’ storm worked its way through the state on Tuesday, and is expected to linger in the area through the end of the week, National Weather Service meteorologist Bill Taylor told CNN.

Blizzard warnings are now in place throughout the state, the NWS posted online, with the state’s Department of Transportation saying that several roadways are closed — including all of the ones leading from Nebraska into Colorado.

‘If your destination is west, please delay those plans and adjust accordingly,’ the department tweeted. 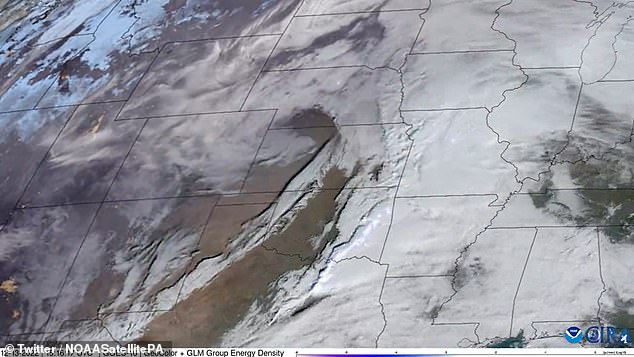