Teenage girl, 17, is rescued from her own CHIMNEY after coming home late and trying to sneak inside her home before her parents realized

Authorities rescued a teenage girl who became stuck inside a chimney after trying to sneak into her home on Wednesday night.

Firefighters dispatched to a residence near 1700 West Baseline Road in a south Phoenix neighborhood around 5pm for a confined space rescue.

What they found was a 17-year-old girl stuck in the bottom of a chimney after unsuccessfully attempting to sneak inside her home after staying out late with a friend.

Firefighters dispatched to a home in Phoenix, Arizona, to rescue a 17-year-old girl who became stuck inside a chimney

According to Fox 10, the girl and her friend, Yasmeen, returned to her home to find it completely locked up.

With no other was inside, the girl decided to scale the home’s roof and shimmy down the chimney.

Pictured: the teenage girl covered in soot after firefighters hoisted her out of her chimney on Wednesday night

Once she became stuck in the chimney, Yasmeen said her friend began to panic.

The girl was stuck inside the chimney for about 90 minutes before rescue crews arrived and took an additional 40 minutes to free her.

Yasmeen (pictured): ‘She thought about going down the chimney…I never thought it was blocked on the bottom, so she went down and she started freaking out’ 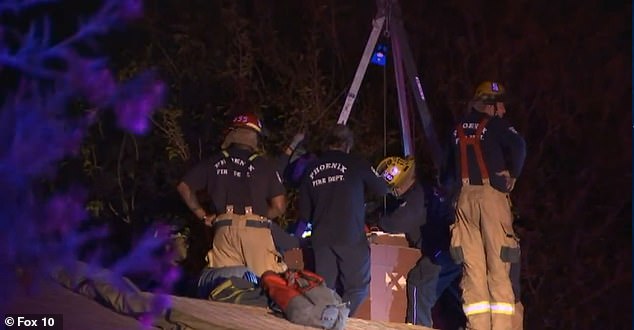 The girl was removed from the chimney safely and examined for injuries before she was released.

AZ Family that the girl was talking to the firefighters throughout the whole ordeal and was even laughing after she was hoisted up.

Unfortunately, her parents didn’t find the incident so funny.

Yasmeen said: ‘They were so mad. Really mad.’