A girl lost both her hands is one of 20 Chinese tourists who were seriously injured in a horror bus crash in New Zealand.

The tour bus rolled on its side on a ‘dangerous’ stretch of the Glenorchy-Queenstown Rd, southwest of Queenstown, at around 1.45 on Tuesday afternoon.

The 32-year-old driver has been charged with careless driving causing injury, and will appear in court later this month.

A young girl lost both her hands in the crash and a woman lost one hand, while 20 other Chinese nationals on board suffered injuries.

The two victims who lost their limbs are believed to be making a steady recovery were not in a life-threatening position after undergoing surgery on Tuesday.

A girl lost both her hands in the crash and a woman lost one hand, while 20 other Chinese nationals on board suffered injuries after a tour bus carrying 23 Chinese tourists rolled on a road near Queenstown 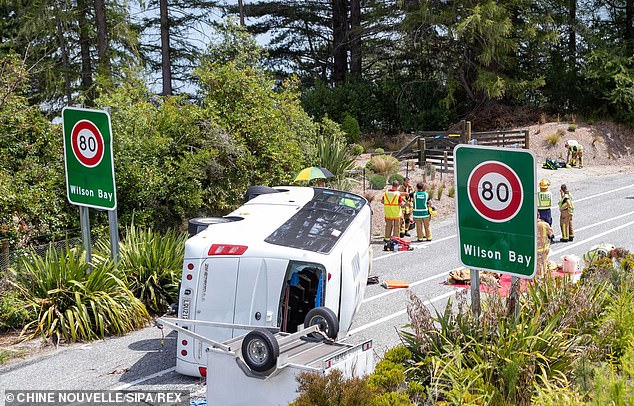 One of the injured is being treated at Dunedin Hospital while the other was taken to Christchurch Hospital.

The others who had minor injuries were treated in hospital before being released.

There were no other vehicles involved in the crash.

Local police officer Olaf Jensen told the NZ Herald there were 23 international tourists on board, some of whom suffered ‘quite significant injuries’.

‘It’s a traumatic scene. There are people with quite traumatic injuries,’ he said.

A Queenstown resident was driving towards Glenorchy and witnessed the bloody aftermath.

‘I came around the corner and the bus was on its side. There was glass … and there was blood,’ he said.

‘There was a bit of carnage on the road and I thought, ‘people have been seriously injured here’. By the look on their faces, you could tell that something horrific had happened.’

A local resident told Stuff that they believe the bus rolled near an ‘acute bend’.

‘There has been a number of crashes on that bend over the years,’ they said.

At least nine other crashes have occurred on the same stretch of road over the past two decades.

Queenstown officer Terry O’Connell said while the incident was ‘very serious’, it could have been ‘a damn sight worse’.

Mr O’Connell said the stretch of road had a ‘reasonably tight bend’.

‘It’s well sign-posted and it comes down a hill and does a bit of an ‘S’ bend,’ he said.

The tour bus was operated by Awing Travel NZ Limited, while the tour group were part of a different travel agency.

An Awing Travel spokeswoman said the bus driver told the company that two women had ‘damaged arms’ and were undergoing surgery in hospital.

‘The driver and other customers who are not hurt are in [the] police station now.’

At this stage the tour company doesn’t know what caused the crash, but the spokeswoman believed it was ‘not over-speed or any dangerous driving’.

Witnesses on the scene said the bus and luggage trailer rolled onto their sides and blocked both sides of the road.

Police cordoned off the road to traffic, before it reopened on Tuesday night. 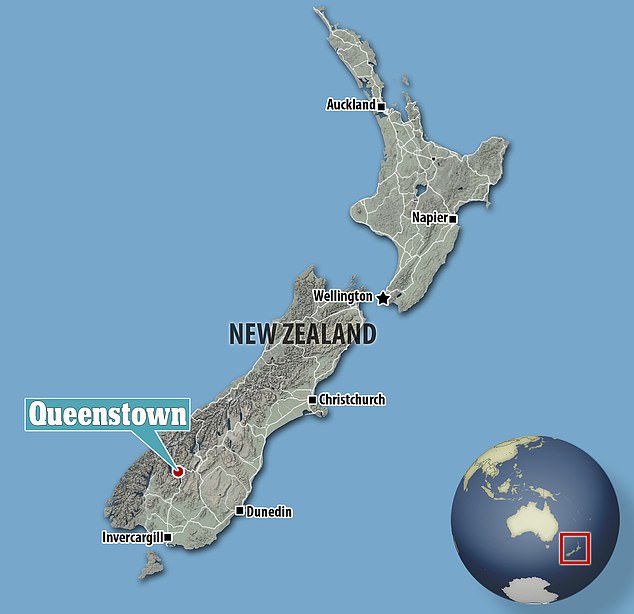 The tour bus rolled on its side at an ‘acute bend’ along the Glenorchy-Queenstown Rd, southwest of Queenstown, at around 1.45 on Tuesday afternoon