A Maryland teenager whose brain cancer resisted all standard treatment is in remission after an experimental drug shrank her tumor in a clinical trial.

Kaitlyn Dorman, from Baltimore, was nine years old when doctors discovered a cancerous tumor growing on her brain stem.

They told her family that the tumor was easily treatable – but nothing seemed to work, and Kaitlyn quickly lost mobility in her left hand, her legs became paralyzed and her vision blurred in her right eye.

Eventually, doctors at Johns Hopkins Hospital presented the Dormans with the chance to participate in a clinical trial for a new experimental drug that would target Kaitlyn’s tumor.

It worked – shrinking the tumor to the size of a grain of a rice – and doctors are now saying that they believe the 17-year-old is officially cancer-free.

‘We’re using the c-word, for cure,’ Dr Eric Raabe, an associate professor of pediatric oncology at the Johns Hopkins Kimmel Cancer Center, who treated Kaitlyn, told The Baltimore Sun. ‘It’s not coming back.’

Kaitlyn Dorman, 17, from Baltimore, Maryland, was diagnosed with a brain tumor when she was nine years old. Pictured: Kaitlyn, right, speaks with Dr Eric Raabe at Johns Hopkins 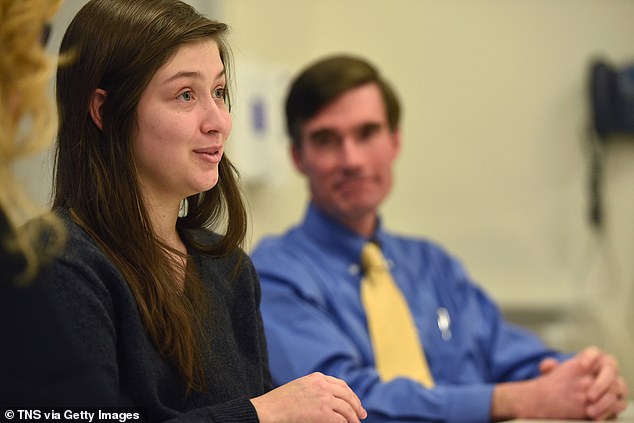 The tumor arises from star-shaped cells in the brain called astrocytes and the survival rate is more than 96 percent. Pictured: Kaitlyn, left, with Dr Raabe at Johns Hopkins

The drug, known as everolimus, was developed by Swiss pharmaceutical company Novartis and is known under the brand name Afinitor.

It works by hindering a specific protein that the cancer cells use to multiply and grow.

In 2016, the US Food and Drug Administration approved the drug to treat cancers of the brain, breast, kidney and pancreas as well as with other medications to prevent rejection of a transplanted kidney or liver.

Novartis has come under criticism in the past. In 2013, the National Institute for Health and Clinical Excellence said Afinitor’s cost at around $47,000 a year was too expensive.

And a study published just this month found that doctors who received payments between 2013 and 2015 from a company for a specific drug boosted their prescriptions of the medication – one of them being Afinitor to treat renal cell cancer.

WHAT IS JUVENILE PILCYTIC ASTROCYTOMA?

Juvenile pilcytic astrocytoma is a tumor that happens in children and teens.

It is typically a benign tumor that slowly grows in the area it develops and doesn’t usually spread to other parts of the brain.

The tumor develops from brain cells called astrocytes. These cells combine with others to form protective tissue around the brain and spinal cord

Symptoms differ based on where the tumor is located in the brain but people can experience:

Treatment is dependent on where the tumor is located and if it has spread to other parts of the body.

Typically, the tumor, or part of the tumor, is removed by a neurosurgeon. The area is then treated with either chemotherapy or radiation.

When it comes to cancer drugs, there is no shortage of double-edged swords.

There is high demand for new drugs to treat all manner of cancer types. Behind those drugs: pharmaceutical companies with financial interests and a messy web of regulation, making cost and access common issues.

As is the case for many families, Kaitlyn’s wanted to try anything to save her as they felt their options dwindling.

In 2011, when Kaitlyn was nine years old, she began experiencing tremors in her left hand that progressively grew worse.

Her mother, Mary, took her to a pediatrician, who first conducted a neurological test and then ordered a CT scan.

The family went to Johns Hopkins for the results, where doctors revealed Kaitlyn had a tumor on her brain stem.

‘All I could think was: “What do we do now?” I wanted to know exactly what we should do,’ Mary told Johns Hopkins Medicine in an interview.

A biopsy was performed and Kaitlyn was diagnosed with pilocytic astrocytoma, a rare childhood brain tumor.

The cancer arises from star-shaped cells in the brain called astrocytes, but its cause is unknown.

According to the National Organization for Rare Disorders, the cancer is estimated to occur in 14 per million children younger than 15 years old.

The main form of treatment is surgery to remove as much of the tumor as possible, followed by radiation and chemotherapy if the tumor can’t be entirely removed.

A 2012 study from the Mayo Clinic found that pilocytic astrocytoma has a five-year survival rate of more than 96 percent in children and young adults.

Doctors told the Dormans that Kaitlyn had to simply undergo a few rounds of chemotherapy and she would be cured.

But this wasn’t the case. Instead her tumor didn’t respond to treatment and began to grow.

Kaitlyn lost movement in her left arm, then on her left side and, finally, in both of her legs.

‘I was never scared,’ she told Johns Hopkins. ‘I just thought it was unreal. I kept wondering: “When will I be able to move again?”‘

Additionally, her right pupil became dilated – blurring her vision – and she contracted a stomach infection during a hospital visit, reported The Baltimore Sun. 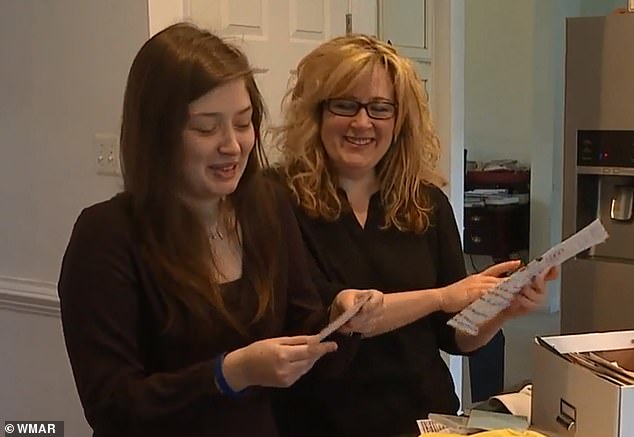 Kaitlyn was put on a regimen of chemotherapy, but her tumor didn’t respond and began to grow aggressively. Pictured: Kaitlyn, left, with her mother, Mary 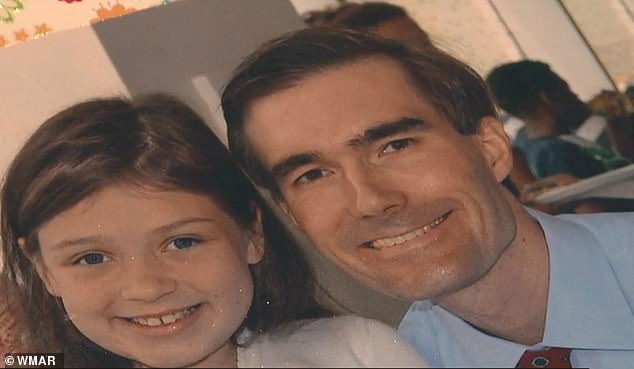 The tumor caused Kaitlyn to lose use of her left arm, her left side and both of her legs. She also lost vision in her right eye. Pictured: Kaitlyn with Dr Raabe in 2011

Doctors tried to be as aggressive as possible with the chemotherapy, but it was taking a toll on her still-maturing body, according to her mother, Mary.

When it became clear that chemotherapy was not going to work, her medical team came up with an alternative solution.

Around this time, Johns Hopkins was one of several hospitals involved in a clinical trial for everolimus.

‘All we really wanted to know was that our daughter was going to get better,’ Mary told The Baltimore Sun.

‘I wasn’t apprehensive about the clinical trial or even anything we had to do in terms of collecting additional data or monitoring her.

‘As a parent, I think we would have done anything to give her an opportunity to survive the tumor that she had.’

Kaitlyn also said that she wasn’t nervous about undergoing the clinical trial for the experimental drug.

‘I couldn’t walk and I couldn’t really see,’ she told the newspaper. ‘Hearing that there was, like, something else that could possibly do something, could possibly make everything go away, I was like: “Awesome. Okay, let’s try it.”‘ 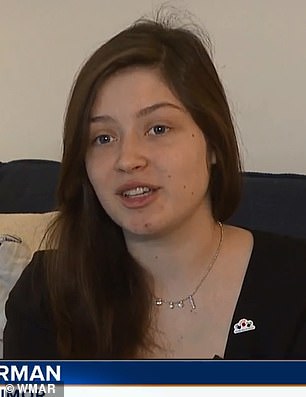 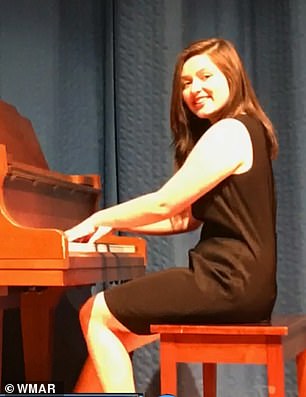 Kaitlyn’s medical team suggested she enroll in a clinical trial for a new experimental drug. The drug works by hindering a specific protein that the cancer cells use to multiply and grow. Pictured, left and right: Kaitlyn in the present day

The drug worked, shrinking Kaitlyn’s tumor from the size of a walnut (left) to a rice grain (right) and she gained back her mobility and sight

The drug worked. Kaitlyn slowly began to gain back movement in her arms and legs and her vision cleared in her right eye.

Kaitlyn had to stop using the drug after it began affecting her liver. But even after she stopped using the drug, the tumor began to shrink.

Her tumor shrank from the size of a walnut to the size of a rice grain, nearly impossible to see on scans, reported The Baltimore Sun.

In the eight years since, the tumor had not grown back.

‘I told my parents: “I’m going back and there’s nothing you can do about it”,’ she told Johns Hopkins.