The girlfriend of Alesha MacPhail’s father today denied having sex in a bus shelter with a 16-year-old boy charged with murdering the six-year-old girl.

Toni-Louise McLachlan gave evidence at Glasgow High Court today during the trial of the boy, who cannot be named for legal reasons and who has blamed her for killing Alesha on the Isle of Bute.

Ms McLachlan denied having sex with the boy in the bus shelter in 2017, as well as meeting him for sex in the middle of the night that Alesha went missing.

Alesha was found naked lying face down in woodland near an abandoned hotel on July 2, only hours after being reported missing from her grandparents’ house.

The teen accused of murder, rape, child abduction and defeating the ends of justice denies all the charges against him at the High Court in Glasgow.

The court heard that Ms McLachlan, 18, learned on Monday that the teenager – who she admitted she used to sell drugs to – had blamed her for Alesha’s murder.

Ms McLachlan denied meeting the accused in the middle of the night to have sex with him – then taking Alesha to the woods, attacking her and ‘planting’ the boy’s semen from the used condom. 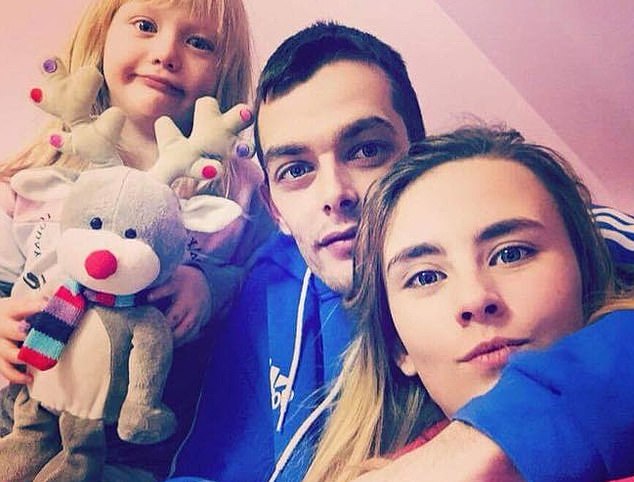 The series of events was put to her by defence, Brian McConnachie, who said she had ‘brutalised’ the little girl using an ‘implement.’

He asked her if she had sex with the accused in a bus shelter on the Isle of Bute in 2017, saying the teens shared a joint and Ms McLachlan confided in the alleged killer about domestic abuse. Ms McLachlan denied that had happened. 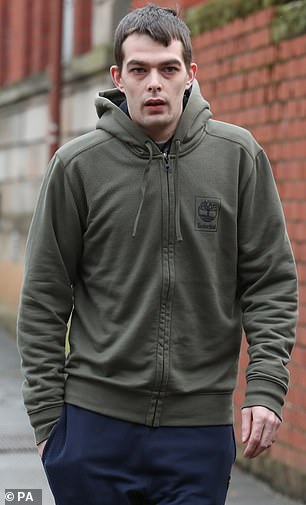 Mr McConnachie said: ‘She didn’t scream because a stranger came into the room, it was you.’ Ms McLachlan said: ‘No.’

The brief claimed that Ms McLachlan met the accused in secret the night before Alesha disappeared, and confided in the boy about alleged abuse from her boyfriend and the girl’s father Robert MacPhail.

He said the pair had walked into a shed where they used a condom provided by Ms McLachlan, and the accused gave her a hoodie because she was cold.

The accused said that was the last time he had seen Ms McLachlan before Alesha was killed, the court heard.

Mr McConnachie accused Ms McLachlan of taking Alesha to the site of an abandoned hotel where the child was murdered and ‘brutalised’ with an ‘implement’.

He then said the 18-year-old had ‘planted’ the condom with the accused’s semen to implicate him. Ms McLachlan said: ‘No.’ 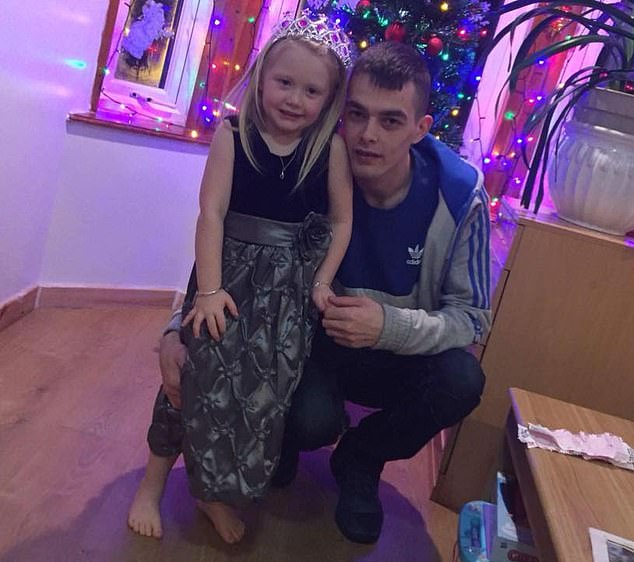 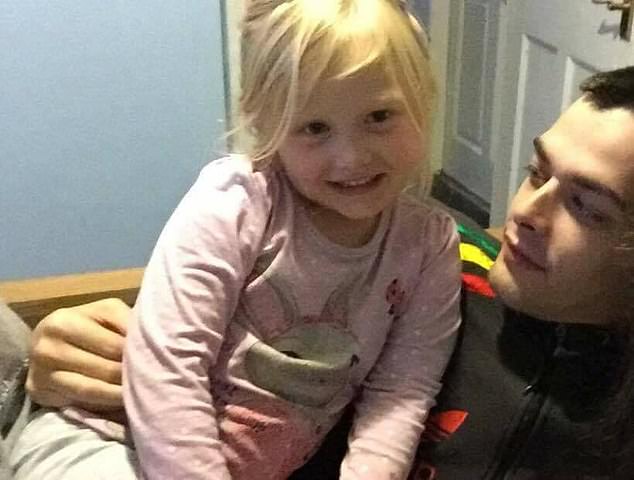 Mr Macphail, who has been attending the trial in Glasgow, is pictured with his daughter Alesha 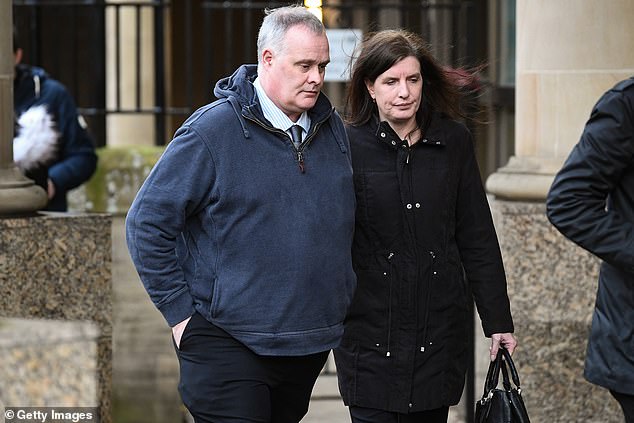 Ms McLachlan also said she had received a Facebook message at about 1.45am that she had missed a call from the accused. She tried to call him back around 6am because she thought it was ‘strange’. 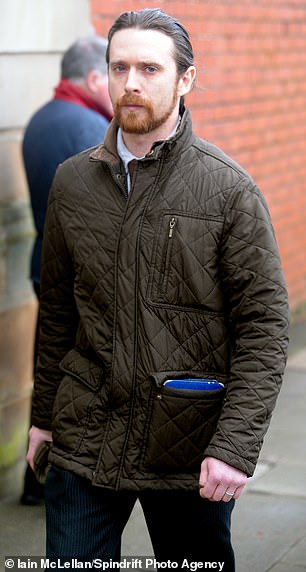 In a Facebook message exchange shown to the jury, Ms McLachlan asked the teen to ‘keep an eye out for Rab’s wee girl’ – before the following exchange:

Asked if she had anything to do with Alesha’s murder, Ms McLachlan replied: ‘No.’

She told the court: ‘I loved her to pieces.’

Ms McLachlan said that on the night Alesha disappeared, she got out of bed to go to the toilet before going into the room where Alesha was sleeping, and switching off the child’s Peppa Pig DVD, the court heard.

She cried in the witness box as she recalled seeing Alesha sleeping, and said she fully closed the bedroom door. 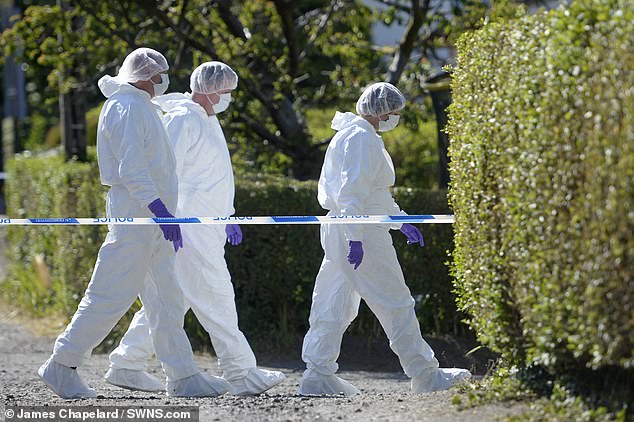 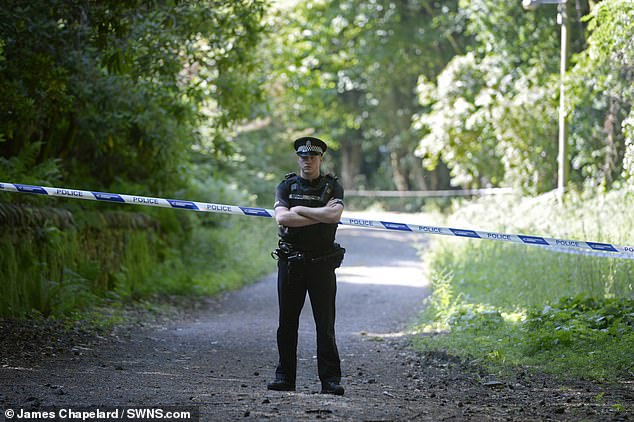 Ms McLachlan admitted she ‘used to sell weed’ to the accused but stopped at his mother’s request.

When asked how long she had sold cannabis to him, Ms McLachlan said: ‘Not for a while, we had stopped selling to him because his mum told us to stop.’

The mother of the boy accused of abducting and murdering Alesha contacted police after the child’s body was found, the court heard today.

Detective Constable Gavin McKellar told the court that the teenage boy voluntarily spoke to officers at around 1am on July 3 at his home.

The boy’s mother had been drinking when she phoned Rothesay police station in the early hours of the morning after Alesha’s body was discovered.

She told officers her son had been out of the house in the early hours of July 2, which was captured on CCTV.

The accused was described as ‘confident’ and ‘very co-operative’ by Detective Constable McKellar, and asked his mum to leave the room while he spoke to officers.

In a statement given to police, as a witness, the boy said he left his house in the middle of the night to buy cannabis resin and took a shower after returning home as he was ‘really stoned’.

He said he realised he had lost his phone, so went back out.

He concluded the statement telling officers he did not go to the MacPhail family home, and said if they didn’t believe him ‘they could have my DNA’.

At the time no mention was made of Ms McLachlan or having sex with a girl the evening before Alesha vanished.

The boy said he had contacted Mr MacPhail and four or five other people he knew who sold cannabis to see if he could get any, and left the house on Ardbeg Road at about 2am.

He said he knew Mr MacPhail was in a relationship with Ms McLachlan but claimed he had never met Alesha, although he knew his dealer had a little girl.

The accused said he walked through Skeoch Wood, between Rothesay and Ardbeg, to avoid police, and walked past the site of an abandoned school before heading to meet a dealer where he bought ‘pollen’ for £30.

A police officer, PC David Grant, recalled being called to the MacPhail household after Alesha was found to be missing.

He described the child’s grandmother, Angela King, as being ‘panicked’ and blaming herself for leaving the key in the door.

And he recalled being met by Alesha’s father, Mr MacPhail, and his girlfriend, who was ‘very concerned and was crying.’

PC Grant said Mr MacPhail appeared to be ‘in a daze’ and was not responding fully to what he was saying, which he believed was as a result of concern for Alesha.

After the child’s body was found around 9am, the officer was told about a knife being found on a beach opposite the MacPhail family home, near a bus shelter.

A large kitchen knife with a black handle and a grey oval inset was shown to the jury on screens in the courtroom.

She told the court: ‘I just couldn’t believe it, but I didn’t think anything bad had happened. I had lived in Rothesay all my life and thought it was a safe place.

‘I thought she might’ve been in the garden. Me and Robert went out. We walked around the park pit Ardbeg where she liked to play, we checked back gardens and sheds.

‘From there we went into the town and we spoke to people at the ferry terminal and the shops.’

She said ‘a lot’ of people helped with the search.

When asked by advocate depute Iain McSporran QC whether she had anything to do with the murder, she replied: ‘No.’

Ms McLachlan told the court she ‘had a bad feeling’ that the accused had phoned on the morning of Alesha’s disappearance, and told a friend of her concerns.

Under cross-examination by defence brief Brian McConnachie, Ms McLachlan said she received messages all morning from people claiming the accused was responsible.

Ms McLachlan said: ‘Yes, I did but I didn’t think anything after he said he didn’t think she would have gone far.’

She agreed that she told a friend, Lindsay Calderwood: ‘I’ve got a bad feeling’.

And she denied that she had been the victim of domestic abuse from Alesha’s father Robert MacPhail, saying: ‘He’s never raised a hand or I’ve felt I’m in danger.’

Ms McLachlan said she did not tell police about the couple’s drug dealing as she did not think it was relevant.

She admitted the couple bought an ounce of cannabis for £200 – using her college bursary money, Mr MacPhail’s benefit money and money occasionally provided to the two by each of their parents for living costs.

Asked about supplying cannabis to the accused via his younger sister, Mr McConnachie said: ‘Instead of supplying to him you supplied it to his wee sister, who is 14.’

But she claimed she did not know the girl was 14. Ms McLachlan claimed she originally didn’t suspect anything because they had not sold cannabis to the accused is months.

She said: ‘We didn’t normally give him weed or anything at that time in the morning.’

Ms McLachlan told the court she called the accused on July 2 because she wanted to know why he had called in the middle of the night.

She said: ‘It was strange the fact he was the only one that messaged in the middle of the night – it was weird. I was genuinely just wondering why he had wanted.’

The young woman added: ‘I knew there was a dispute about money but it wasn’t about that, it was because I didn’t want my family to find out.’

And she said there was no significance to the kiss she put at the end of a Facebook message.

When asked by the accused’s brief how it felt to be accused of murder, Ms McLachlan said: ‘Horrible. I don’t know how to take it. I’m sad, I’m angry, I’m full of emotions.’

Alesha’s mother covered her face in the public gallery when the question was asked, and left the courtroom when her daughter’s injuries were mentioned. 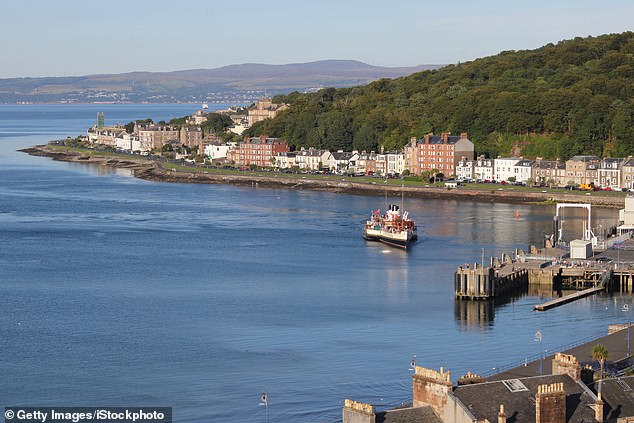 Ms McLachlan cried in the witness box when cross-examination ended.

The court also heard from the man who found Alesha’s body. Jorge Williams recalled being shown pictures on Facebook of the missing child, and going out to look for Alesha.

He saw search parties combing the beach, so took a high road. Mr Williams said he looked up the steps and checked over wall and saw the girl’s lifeless body.

He told the court he approached her body and checked her neck for a pulse, but there was none.

A police officer called to the scene of Alesha MacPhail’s dead body cried as he recalled finding the little girl’s bruised body ‘a bit rigid’, with blue lips.

Sergeant Martin Wilson gave evidence and said he was led to the scene by Mr Williams. He put on a pair of gloves before checking the child’s neck for a pulse.

PC Wilson said: ‘Her left arm was a bit rigid.’ He added: ‘There was bruising to her torso and her lips were blue.’

When asked by advocate depute Iain McSporran QC how the crime had affected him, PC Wilson said: ‘I have a seven-year-old daughter.’

The officer, who was brought over to the Isle of Bute from his usual post on Argyll, told the court he cordoned off the woods with police tape.

He said he was stationed at the scene all day and all night and could only give limited information to the public.