Premier Gladys Berejiklian has warned unvaccinated NSW residents will miss out on new freedoms even after the state hits 80 per cent double dose.

‘At 80 per cent additional freedoms will be for those who are fully vaccinated,’ she said at a Covid briefing on Wednesday.

The premier continued that it would be a ‘period of time’ before those who haven’t got the jab can enjoy the same freedoms and when that will be will be based off health advice.

This means that while some can enjoy a drink at the pub, holiday around the state and attend gatherings, others may have to stay at home for much longer.

‘It will be an absolute fact that once we start opening up we will see a rise in case numbers. At 80 per cent when vaccinated people have more freedoms, it won’t mean unvaccinated people will participate,’ the premier said.

‘There will be another date after that by which the unvaccinated people will be able to participate in events or activities.’

Some major events could however only remain available for the vaccinated only, with Ms Berejiklian adding some airlines may only take travellers who have received both jabs.

NSW remains on track to hit its 70 per cent double jab target in the first week of October with 54.2 per cent of eligible residents now fully vaccinated. 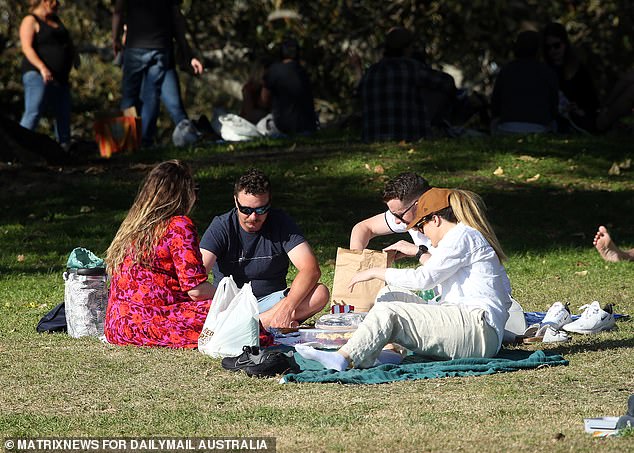 By mid-October health authorities are hoping the state will have reached the 80 per cent target.

For those who have received both jabs, some restrictions have already slightly eased.

As of Monday fully vaxxed Sydneysiders can meet in groups of five for picnics outdoors.

A quarter of NSW students aged 12-15 have now received at least one jab as they prepare to return to the classroom within weeks.

Premier Berejiklian assured the vaccine passport will be ready with a two week test run of the initiative in regional NSW ahead of the state reopening at 70 per cent.

More than nine million doses have been administered across NSW while 83 per cent of over-16s have received at least one jab.

Customer services minister Victor Dominello shared details on how vaccine passports will be integrated into the Service NSW app.

The state government is consulting with industry to conduct a two week pilot of between 100-500 residents in Covid-free regional NSW areas from October 6.

‘We’re now in the process of consulting industry in relation of the design of how it should work, and we’re pretty much there,’ Mr Dominello said.

‘But ultimately, we’re aiming to do a pilot in the regions commencing on October 6 for two weeks and then, hopefully, the subject of the pilot will be strong and, as a result of that, we can open up to the rest of the state.

‘This is, in many ways, about future-proofing for the people of NSW because even though we may be ahead of the other states, the other states may require vaccination status to be displayed so, if we get this right, it will enable freedom of movement right across Australia as well the months ahead.’

Vaccinated residents are urged to get their vaccine certificate via the Medicare express app or contact Australian Immunisation Register to receive a hard copy in the mail.