A high-ranking former staffer of Gladys Berejiklian has desperately tried to sidestep a question about what the Premier really thinks of Scott Morrison, before admitting they had a ‘difficult’ and ‘tense’ relationship.

Ehssan Veiszadeh, the former Director of Strategy for the New South Wales Premier, was asked point-blank by stars of The Project if Ms Berejiklian called the Prime Minister an ‘evil bully’, as recent news reports suggest.

The seasoned political strategist made an attempt to wriggle out of the answer before being put on the spot yet again in a very awkward exchange.

‘I think – I think that’s a pretty hard question for me to answer,’ Mr Veiszadeh said.

Channel Ten star Lisa Wilkinson said rumours that the Liberal Party pair are at odds with each other have dated back to the bushfires at the end of 2019.

‘Gladys handled those brilliantly, the Prime Minister not so much. So does that description (of him being a bully) sound pretty close to the mark when it comes to Gladys’ relationship with the PM?’ she asked.

Veiszadeh replied: ‘I’m not going to talk about my time in government or people who have been quoted without putting their names to it, it is pretty obvious that the relationship at times is difficult.’

While he tried to sidestep the question, he was forced to admit ‘tensions’ had risen between the Liberal colleagues.

‘It’s very hard for me as a former government staffer to speak about relations between the federal and state government,’ he explained.

‘I’ll leave that to the columnists to talk about but, yes, it’s obvious that it has been a tricky situation for the country and, yes, there have been tensions.’

Unsatisfied with the ‘diplomatic’ response, fellow host Hamish MacDonald jumped at the chance to probe the former Aide.

Ehssan Veiszadeh, the former Director of Strategy for the New South Wales Premier, was asked point-blank by stars of The Project if Gladys Berejiklian (pictured) called the Prime Minister is an ‘evil bully’ as recent news reports suggest 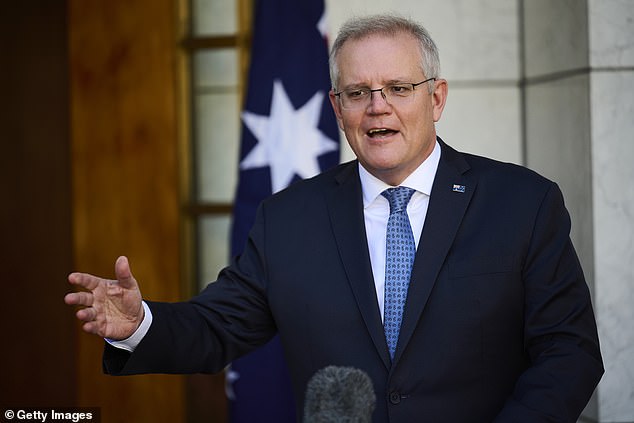 Channel Ten star Lisa Wilkinson said rumours that the Liberal Party pair are at odds with each other have dated back to the bushfires at the end of 2019. Pictured: Prime Minister Scott Morrison

‘We know there’s been backgrounding going on by the Prime Minister’s office against the Premier so do you think the PM can be a bit of a bully?’ the veteran journalist asked.

Mr Veiszadeh replied: ‘I think that’s a pretty hard question for me to answer.’

The Project panel erupted with laughter before MacDonald said: ‘I think your face says it all.’

Comedian Tommy Little chimed in by saying ‘please don’t give us a politician’s answer, we’d rather you say nothing’.

Ms Berejiklian on Sunday shot down reports she called the prime minister a ‘bully’ and ‘evil’ insisting the pair are on good terms.

Speaking at her Covid press conference, the Premier outright denied reports that she had resorted to name calling behind the Prime Minister’s back. 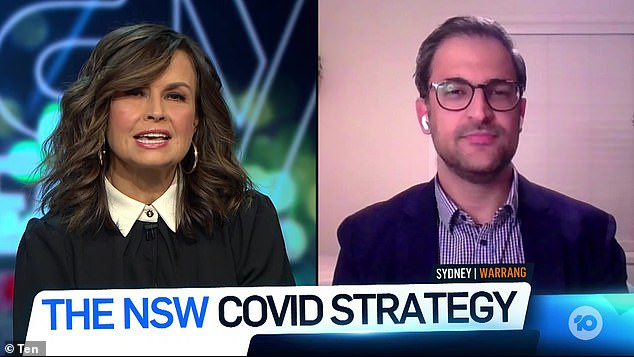 ‘It’s very hard for me as a former government staffer to speak about relations between the federal and state government,’ Mr Veiszadeh (right) told Lisa Wilkinson (left)

‘I completely say do not believe what you read,’ she told reporters.

‘Can I say this, a number of times, some of you in this room might not like what I’m about to say.

‘A number of times I’ve read things during the course of this pandemic that hasn’t been based on fact. I always say listen to the briefings and what we say here, because that is fact.’

The Sydney Morning Herald printed claims that Ms Berejiklian told colleagues she believed Mr Morrison was a ‘bully’ and described his behaviour as ‘evil’.

The state leader was pressed by reporters to corroborate the article before she vehemently downplayed any rift.

‘Can I thank the Prime Minister for his support during the entire course of the pandemic, but especially in relation to this outbreak,’ she said.

‘Those extra doses of Pfizer he was able to give to NSW are making a real difference, and I have thanked him privately. I also want to thank him publicly for that incredible support.’

Senior colleagues said the premier was fuming after a source from the Prime Minister’s office contacted The Sunday Telegraph. 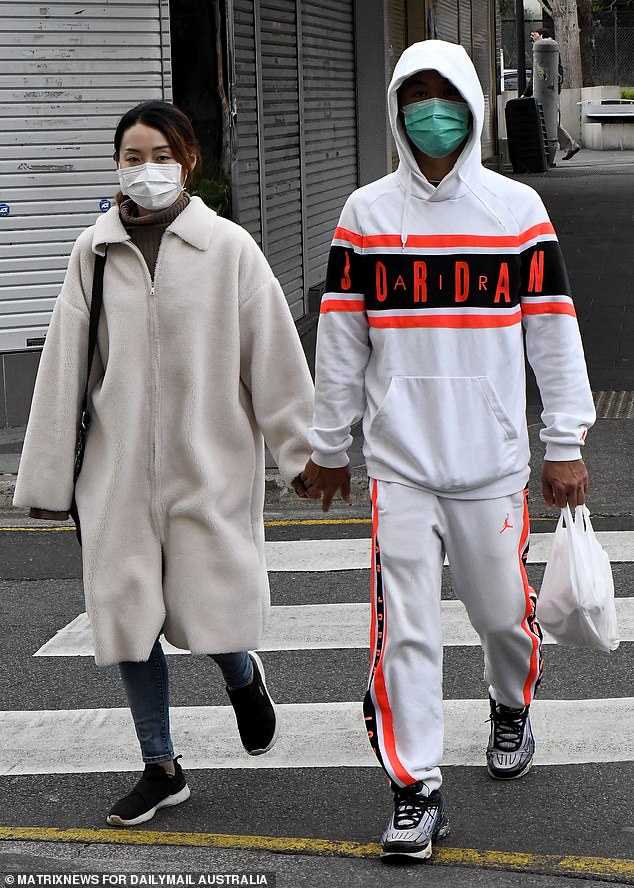 They told the paper the Prime Minister advised Ms Berejiklian to impose a state-wide lockdown days before she introduced one on August 14.

Sources close to Ms Berejiklian claimed the leak had the Premier fuming and she took it as an attempt by the Scott Morrison’s office to undermine her authority.

‘Usually he briefs against her for doing her job with some measure of competence,’ they claimed.

‘He doesn’t like the contrast – he makes himself look big by trying to make others look small.’

They claim she finds it so unpleasant to work with Mr Morrison that she would have preferred Defence Minister Peter Dutton as prime minister. 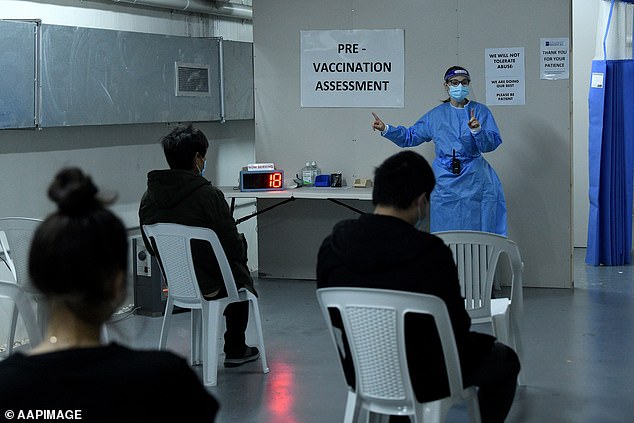 ‘Those extra doses of Pfizer he was able to give to New South Wales are making a real difference, and I have thanked him privately,’ Ms Berejiklian said (pictured, a vaccine clinic in Belmore on Sunday)

Mr Dutton was narrowly defeated by Mr Morrison in a leadership spill in 2018 that deposed former prime minister Malcolm Turnbull.

NSW ministers say the premier vented her frustration over the political leak during private discussions with colleagues.

‘She said, ‘If they want to start backgrounding on stuff like this, maybe it’s time I started leaking stuff that the PM says to me that never comes to fruition, like on vaccines’.’

Mr Morrison previously confirmed the NSW premier had been advised to lockdown the state under the recommendation of chief medical officer Paul Kelly.

‘Well, I can confirm the decision of the NSW government to have a statewide lockdown is consistent with the advice that I had received from the chief medical officer that the government had considered and had been discussed with the NSW Government,’ Mr Morrison told reporters in Canberra. 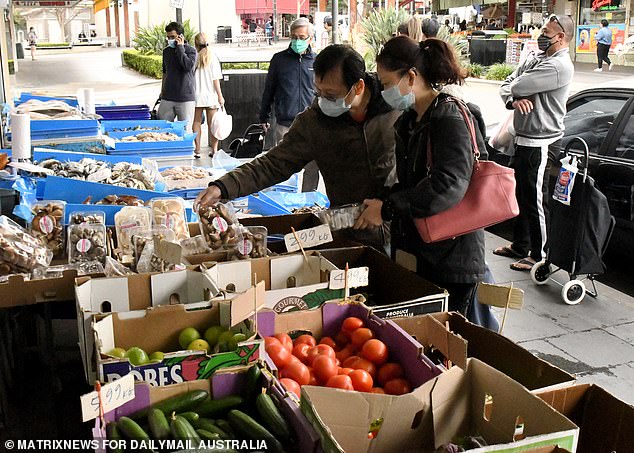 Asked when Ms Berejiklian was told, and why she did not act on the advice, Mr Morrison declined to address the questions.

‘I confirm what our position was and how we’ve relayed it and I’m pleased the decision has been taken and I think it is really important now that we just focus on making it work,’ he said.

But the Premier refuted the prime minister’s claim just an hour later while addressing the media at a press conference in Sydney on August 1 .

Asked whether Mr Morrison urged her to lock down the state, Ms Berejiklian said she made the decision after being advised by Chief Medical Officer Kerry Chant.

‘Can I say, what I’m about to say is the absolute fact. Yesterday, after the press conference, I went upstairs for a briefing with Dr Chant,’ she said. 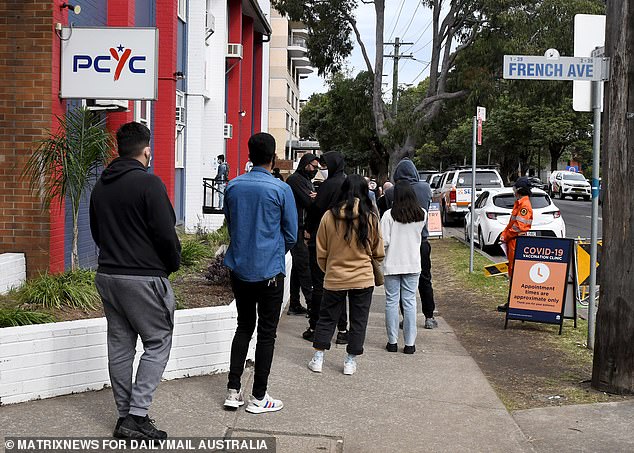 ‘She provided me with additional advice. I shared that advice with the Deputy Premier. We then moved to lockdown all of rural and regional NSW.

‘To be frank, yesterday most of the state was locked down already.

‘It was just a few local government areas in regional and rural communities.

‘Please know, that in a pandemic, you have to act on the health advice he receive and we had received advice yesterday about many people moving from the ACT to the southern parts of NSW which was a concern given what is happening in the ACT so that advice was provided to me yesterday and we took that advice immediately.’