Hold onto your hats! Glamorous Goodwood racegoers arrive in pristine summer dresses and elegant heels despite the wet and windy weather on day four of the festival

By Femail Reporters For Mailonline

It is a blustery day at Goodwood Racecourse, but that hasn’t stopped glamorous revellers for turning out in their finest frocks and fanciest fascinators for another day of racing action.

Women held onto their hats as they arrived at the course in Chichester, West Sussex, for the fourth day of the Qatar Goodwood Festival.

Racegoers organised enough to bring umbrellas whipped them out as a light shower rained down on the open-air enclosure ahead of today’s races.

It was held without any paying spectators in 2020 due to Covid restrictions, but racing fans have been determined to make up for lost time and have been putting on a dazzling sartorial display all week. 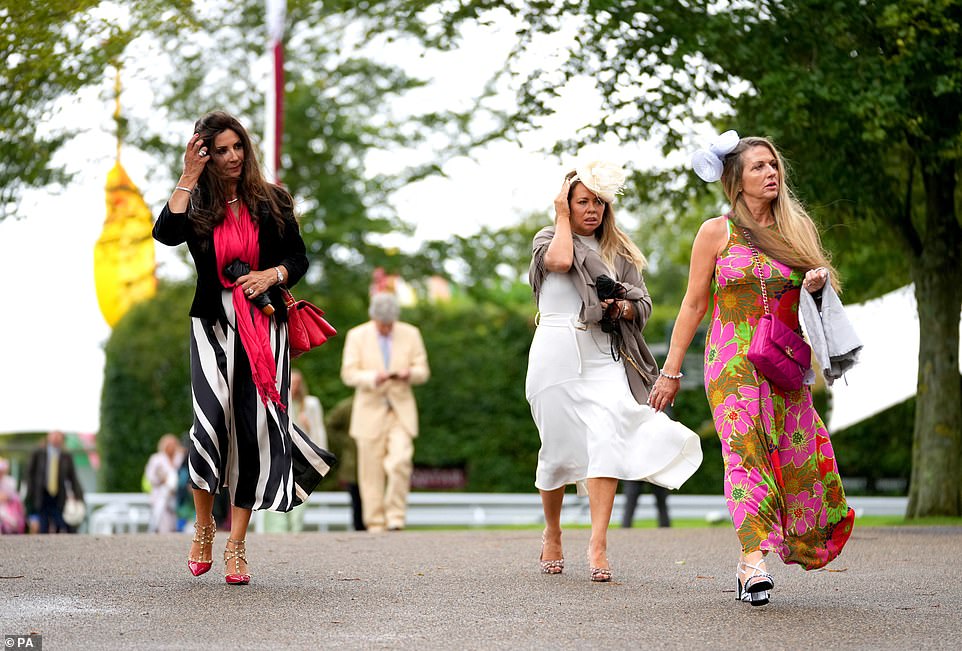 Bright and breezy: Racegoers held onto their hats and fixed their hair as they arrived at the West Sussex racecourse today 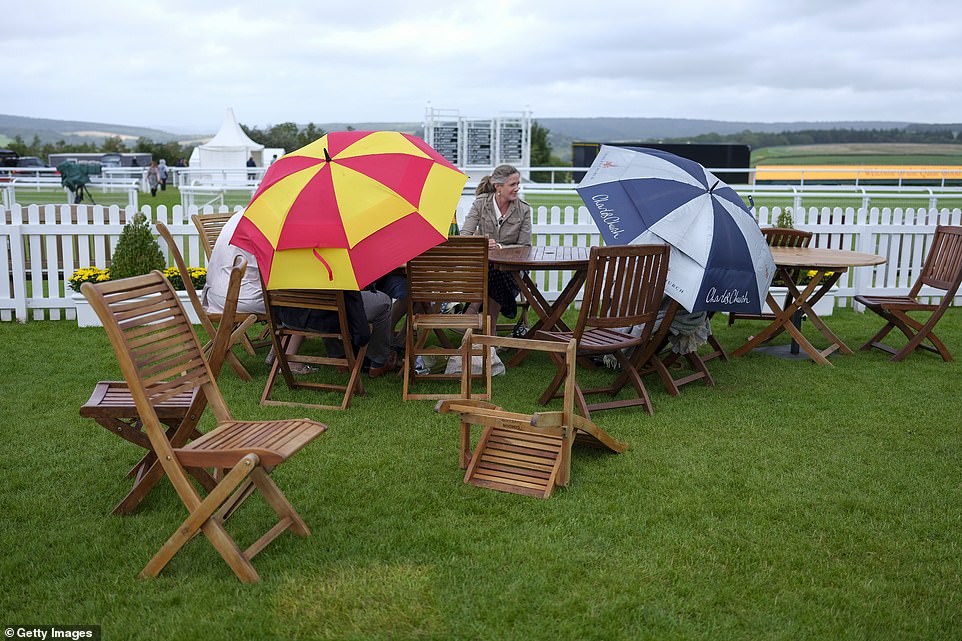 Under my umbrella! Organised racegoers who had brought their brollies whipped them out when the heavens opened

Today was no different with breezy white linen frocks, eye-catching blazers and elegant heels all on show as the gates opened at Glorious Goodwood.

The famous racing event attracts guests from up and down the country and is considered one of the more relaxed meetings when it comes to the dress code, but plenty of racegoers still opt for a hat to elevate their look.

The annual Qatar Goodwood Festival is touted as the sporting and social highlight of the calendar, with five thrilling days of world-class horse racing and elegant fashion for racing fans to enjoy.

It was due to welcome 5,000 racegoers through its gates on the final day last summer but those plans were scrapped by the Government a day before it was due to go ahead because of the pandemic.

Goodwood managing director Adam Waterworth said at the time that the U-turn cost the track a ‘six-figure sum’ but the cost to racing was much, much bigger. 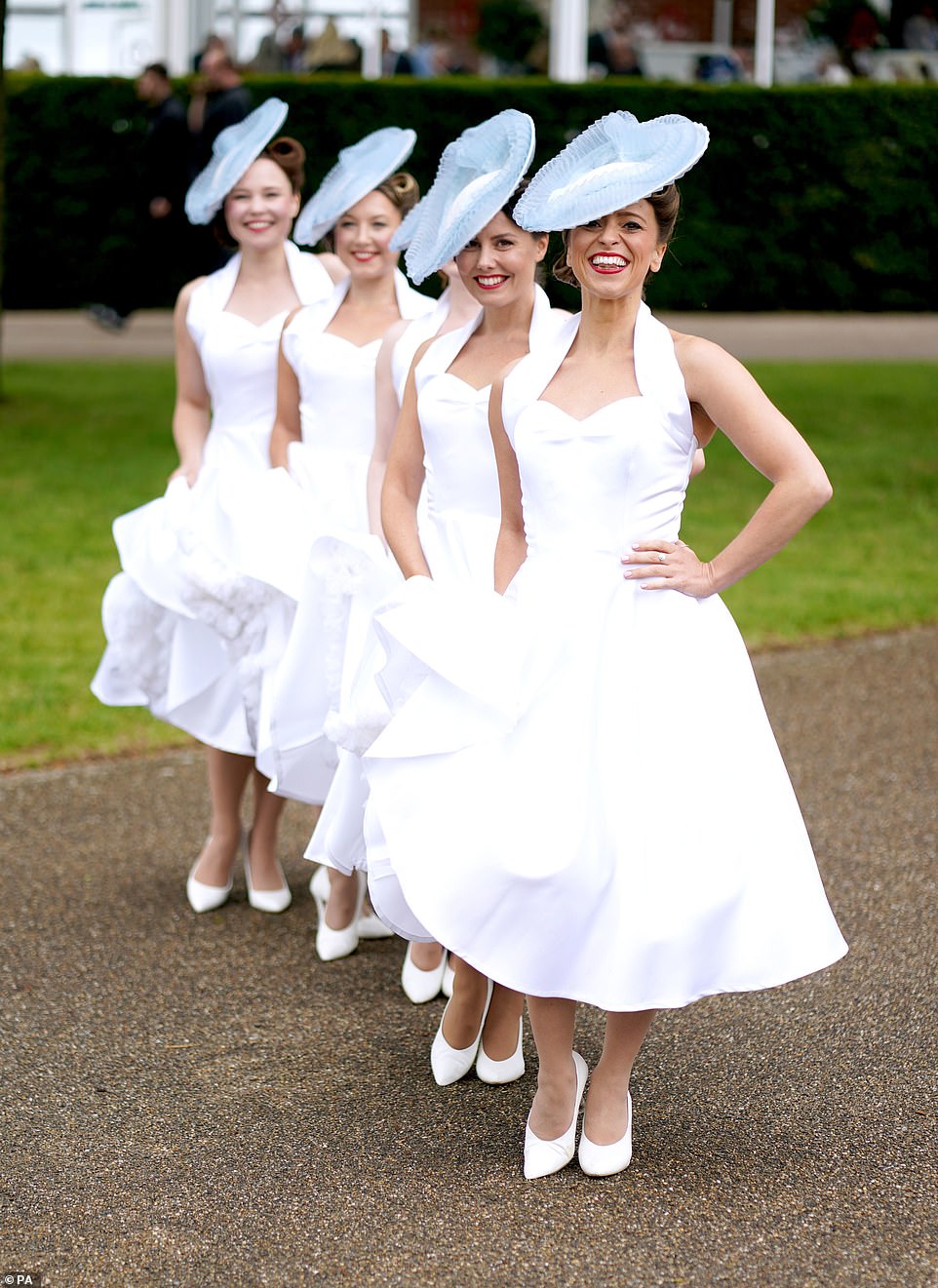 Let us entertain you! Musical act Elle & The Pocket Belles arrive ahead of day four of the Goodwood Festival 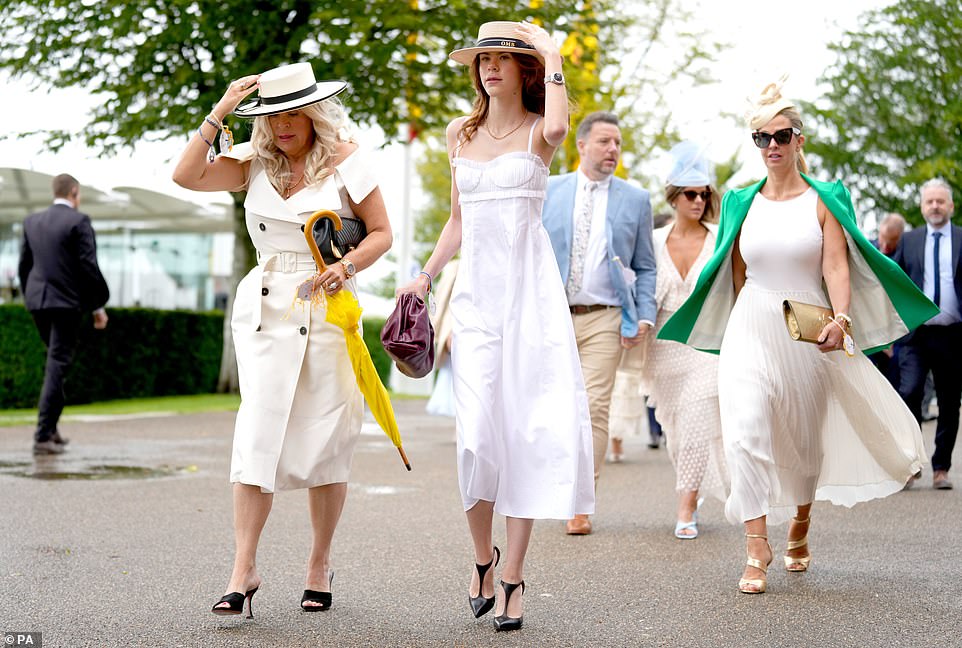 Fashion parade: Women showed off their sartorial prowess as they arrived at the festival in the wet and windy weather

‘It has cost us six figures. But it was never a money-making exercise, it was about proving we could get crowds back,’ he said.

‘The loss is huge in what is already a year when there is no profit and the loss figure is getting bigger and bigger. Crowds are what we are all about.

‘Between 70 and 80 per cent of our revenue is directly due to people coming through the gates. It’s a big kick because there was a bit of light at the end of the tunnel having thought we had actually done it getting crowds back.’

Waterworth revealed to Sportsmail earlier this year that the cancellation of the trial did, in fact, cost Goodwood over £250,000 and confirmed that the track lost millions from not having any racegoers in attendance throughout the whole season.

Goodwood held just 13 racedays – six less than usual – last year due to rescheduling and all went ahead without any paying punters.