There may be lots of uncertainty in the air, but one thing is clear — deals are for the taking over the Easter break. Brexit day is meant to be March 29, and it seems that people are hedging their bets when it comes to holidays.

That’s understandable, but caution does not always pay off because prices are tumbling by up to 50 per cent.

Factor in resorts going the extra mile to keep tourists sweet and — whisper it — the days following our withdrawal could well be the canniest time to travel this year.

The Aquaventure Waterpark, pictured, is a popular choice for families visiting Dubai. This Easter, a family of four can save 42 per cent on a holiday to the city in the United Arab Emirates

Holidaying on another continent is a sure-fire way to forget the UK’s new status on this one. And it doesn’t hurt that temperatures in Dubai regularly exceed 30c over Easter.

Check into the glitzy five-star Fairmont The Palm for hot days, cool nights and zero politics. 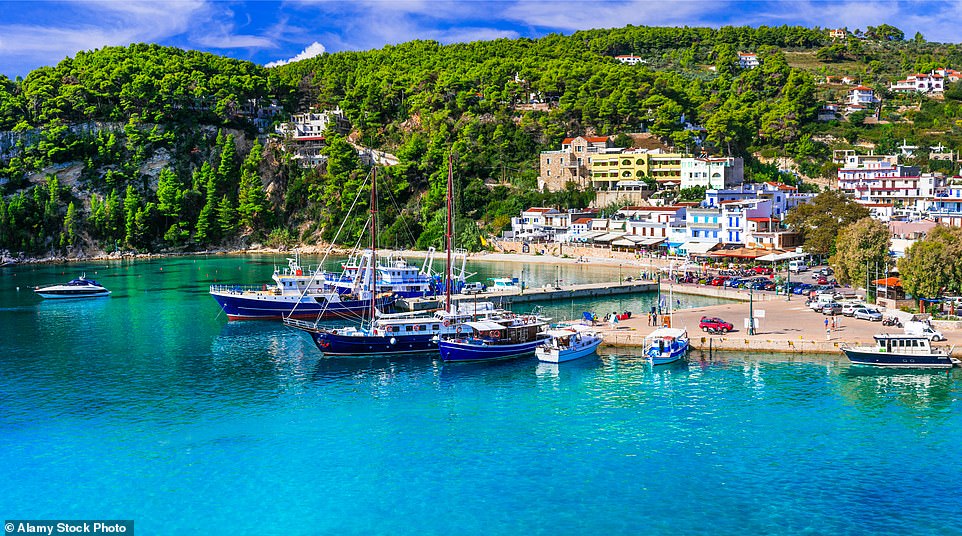 Greece’s tourism industry is firing on all cylinders again and holidaymakers can save 40 per cent on a break to the island of Alonissos, pictured, in May

Greece’s tourism industry is firing on all cylinders again.

Switch off your news feed and breathe out at Katia’s House, a one-bedroom villa with a private pool perched on the hillside in Kalamakia, on the far-flung Hellenic island of Alonissos.

BOOK IT: A seven-night self-catering stay at Katia’s House now costs £569pp — reduced from £936pp. Price includes flights from Manchester on May 3 and car hire, gicthevillacollection.com, 020 8232 9780. 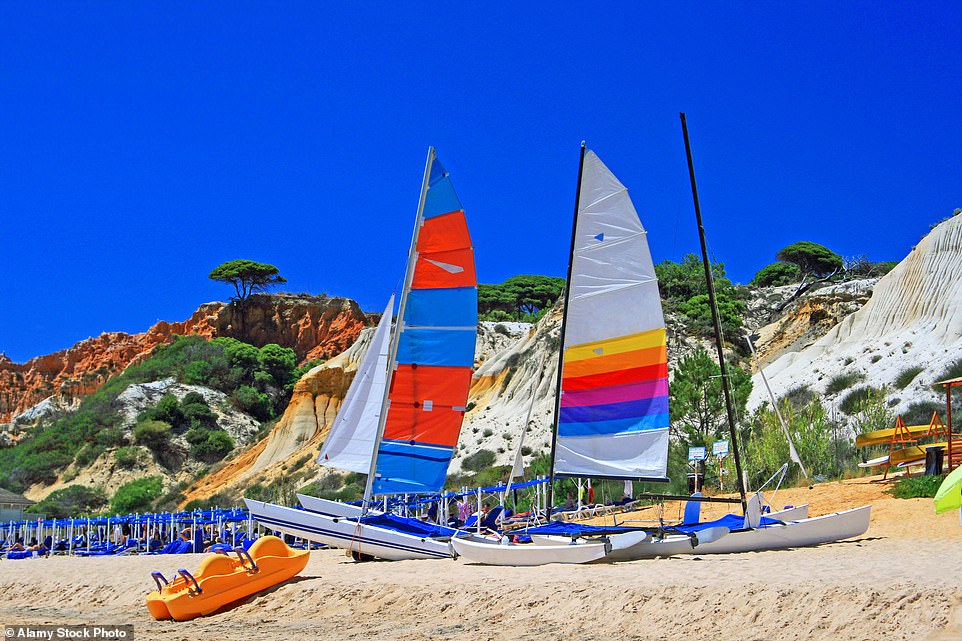 A seven night stay at a B&B on the Algarve in Portugal, pictured, over the Easter holidays is going for half price

Blow the Brexit cobwebs away on the breezy Algarve, where April temperatures hover at 20c.

With nearly 50 per cent off, a room at the five-star Epic Sana Algarve, which has five pools, overlooking Falesia beach, could be just the ticket. 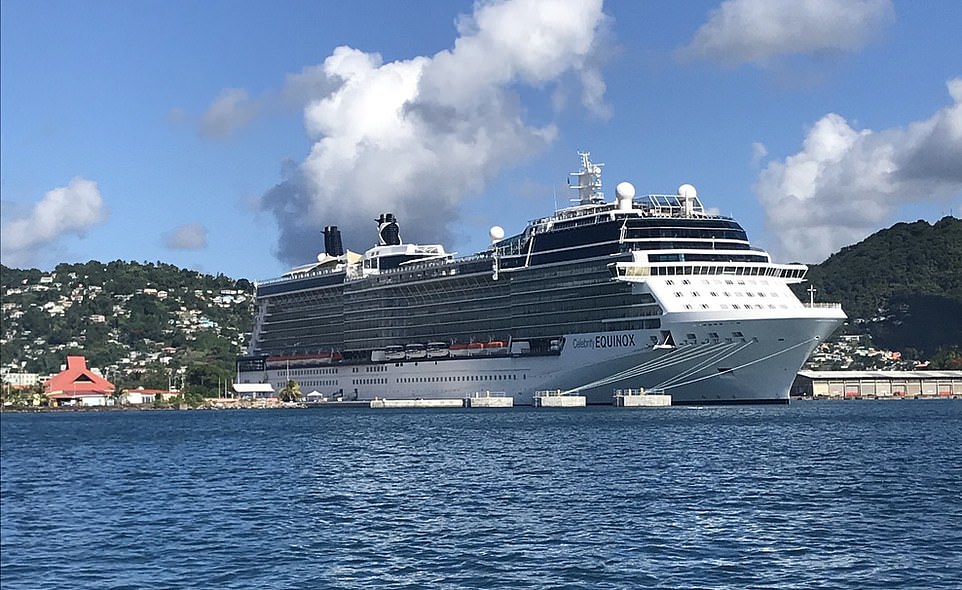 Cruise lovers can save £700 per cabin on a sailing on Celebrity Equinox, which departs Miami on April 20 and heads for the Cayman Islands and Cozumel

Wave adieu to the European political maelstrom on a Caribbean cruise, where dinner conversation is more likely to revolve around the sunsets and cocktails.

BOOK IT: Departing Miami on April 20, the Celebrity Equinox has stops including the Cayman Islands and Cozumel. 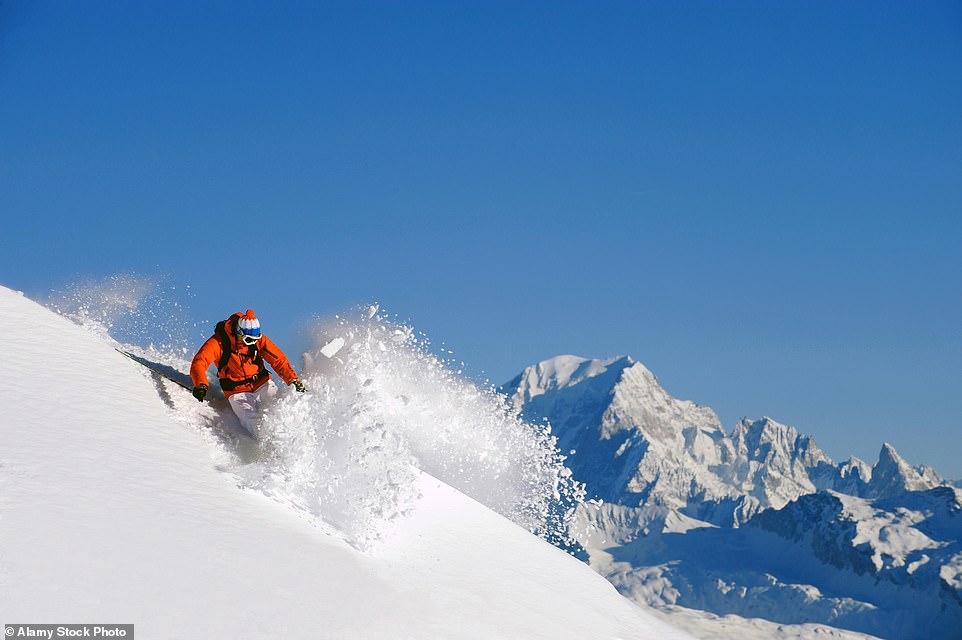 Brits could enjoy one last hurrah in the Alps over Easter as the French mountains around La Plagne, pictured, are awash with late deals

Before the muddy shoulder season kicks in, enjoy one last hurrah in the Alps, where Easter ski deals have been plunging in price, with big resorts in the French mountains awash with late deals.

BOOK IT: Skibeat is offering a week fully-catered at Chalet Arpette, in La Plagne, where it is still snowing, for £499pp — down from £819pp.

CANARIES GOING CHEAP – 40 per cent off 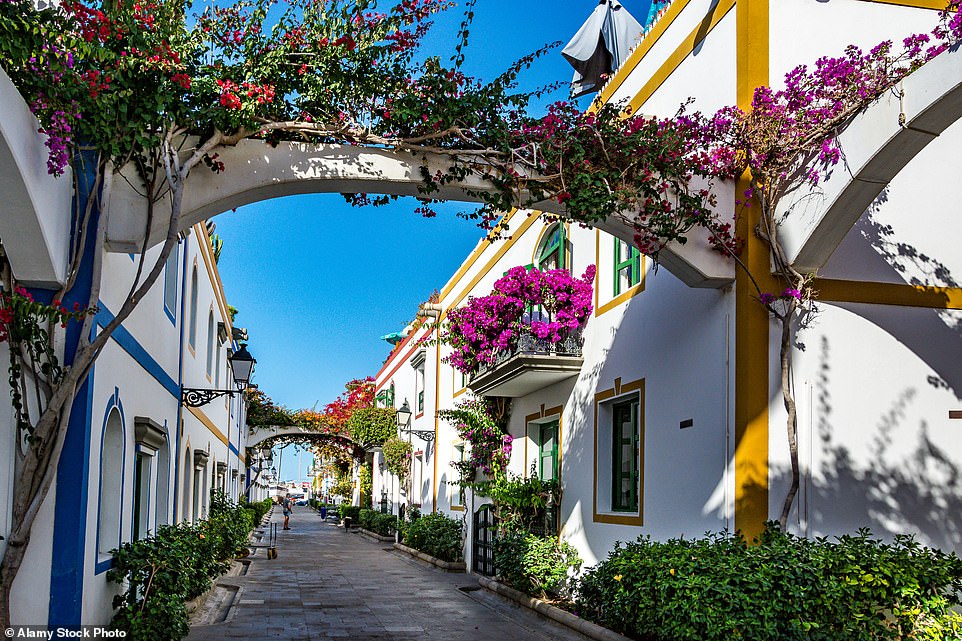 A week’s all-inclusive stay based on two sharing in Gran Canaria, pictured, in the Canary Islands is available with 40 per cent off

Swap the UK spring for the Canary Islands’ perpetual summer by jetting out to the balmy volcanic lands of Gran Canaria.

How does the four-star Taurito Princess, all-inclusive and beach-side, on the south-east coast, sound?

BOOK IT: A week’s all-inclusive stay, based on two sharing a twin room, now costs £573pp, including flights on April 8 from Birmingham with holidayhypermarket.co.uk, 0800 916 5100. 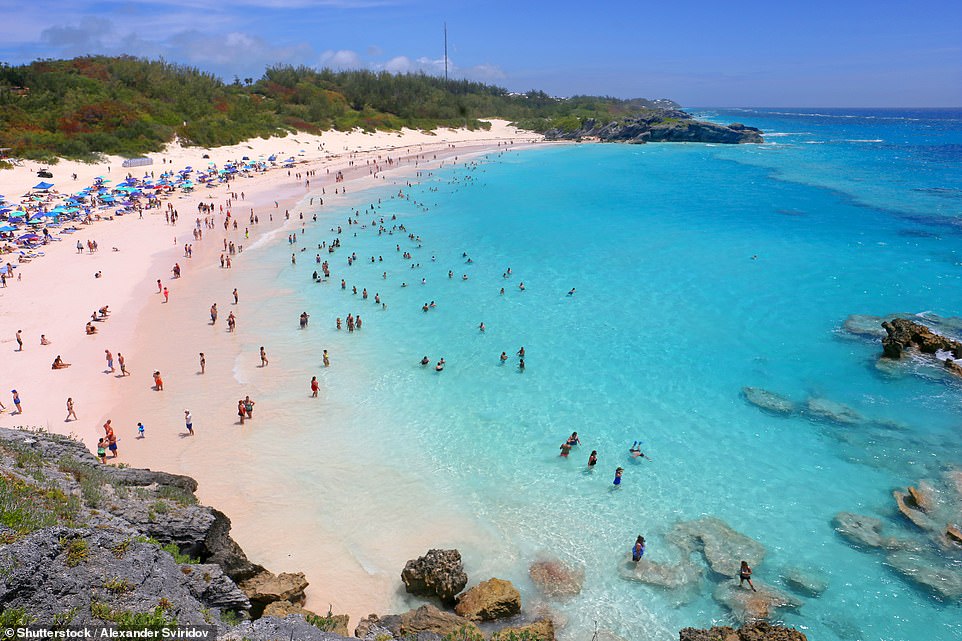 Bermuda, in the North Atlantic, is less than eight hours from the UK, and savings of 25 per cent on a week’s holiday are available for April

The ‘pink palace’, the Fairmont Princess, makes for a soul-soothing base.

SARDINIA IN STYLE – 25 per cent off 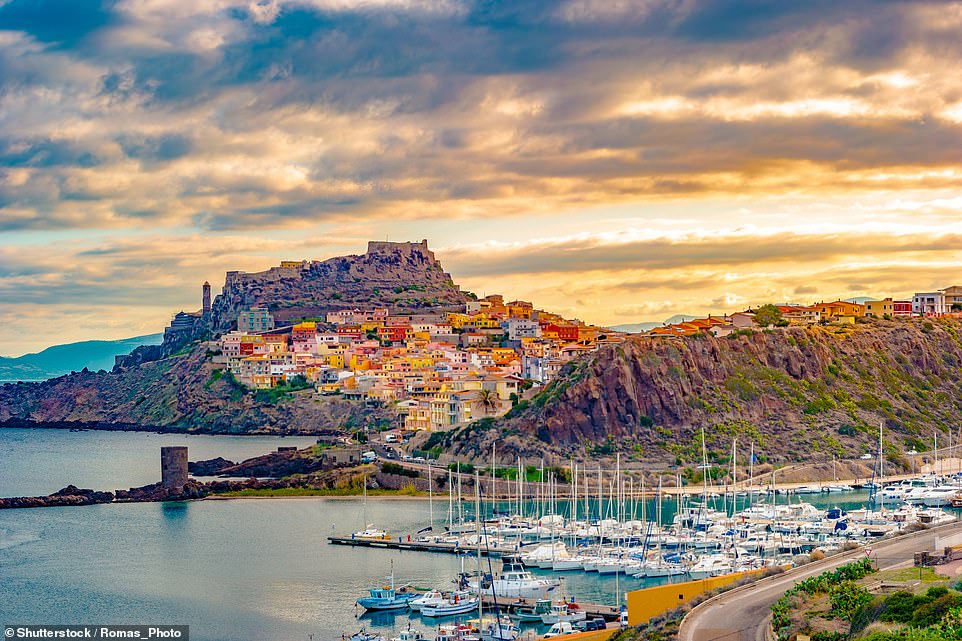 Sardinia at Easter is usually a lot quieter than the summer months. Holidaymakers can find deals here with 25 per cent off for April

Sardinia at Easter is a savvy move, for the crowds generally don’t arrive until early summer.

Explore the rugged, pre-historic hinterland and beaches that woo at first glance from the comfort of the family-friendly Chia Laguna Resort in the island’s south.

CUT-PRICE CYPRUS – one third off 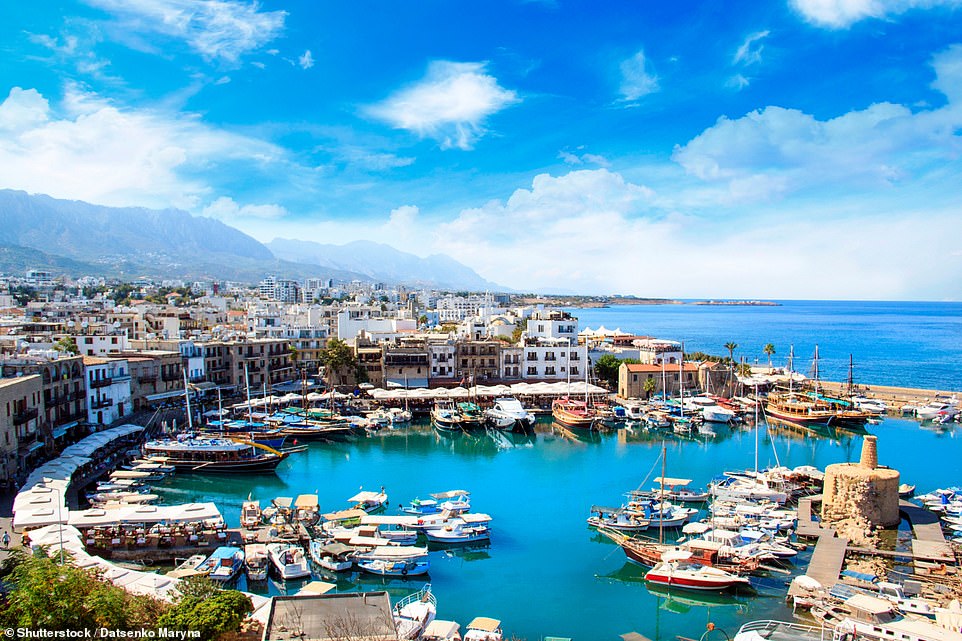 Cyprus, pictured, is always a favourite with Brits as it is only four hours away and at Easter, enjoys temperatures of around 23C

Our love affair with Aphrodite’s Isle is unlikely to be sullied by our EU departure. Four hours in the sky equals glorious Easter sun — about 23c — when you land.

A raft of all-inclusive deals are making Cyprus terrific value.

BOOK IT: First Choice has week-long, all-inclusive stays at the Holiday Village Aliathon in Paphos for £777pp, based on four sharing. Flights depart from Birmingham on April 10, firstchoice.co.uk, 0203 451 2720. 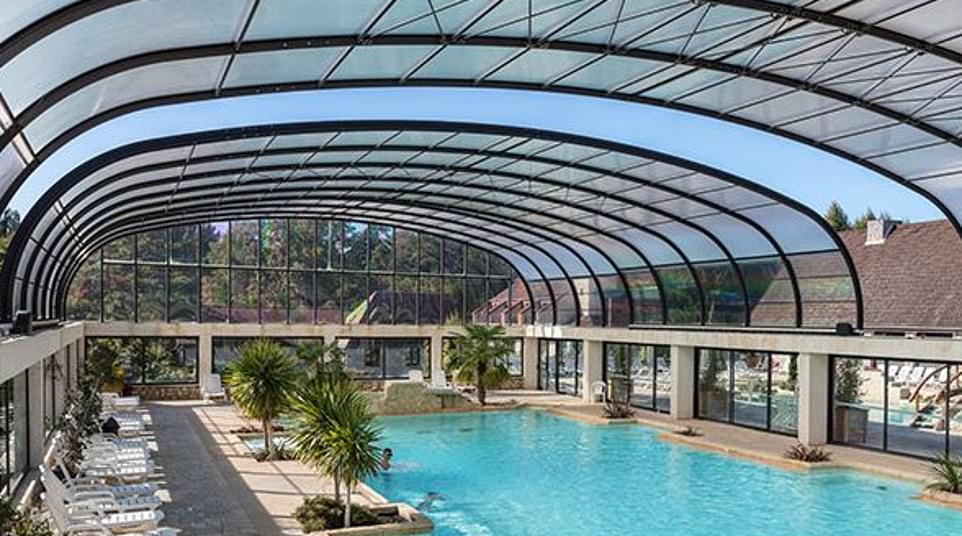 The five-star La Croix Du Vieux Pont in the Champagne region, pictured, where there is a saving of 50 per cent over Easter

Do your bit for Anglo-French relations and escape to a French holiday park for the school break.

Raise a glass to new beginnings at the five-star La Croix Du Vieux Pont in the Champagne region. Children will love the activities including archery, trampolining and go-karting.

DELICIOUS MAURITIUS – 30 per cent off 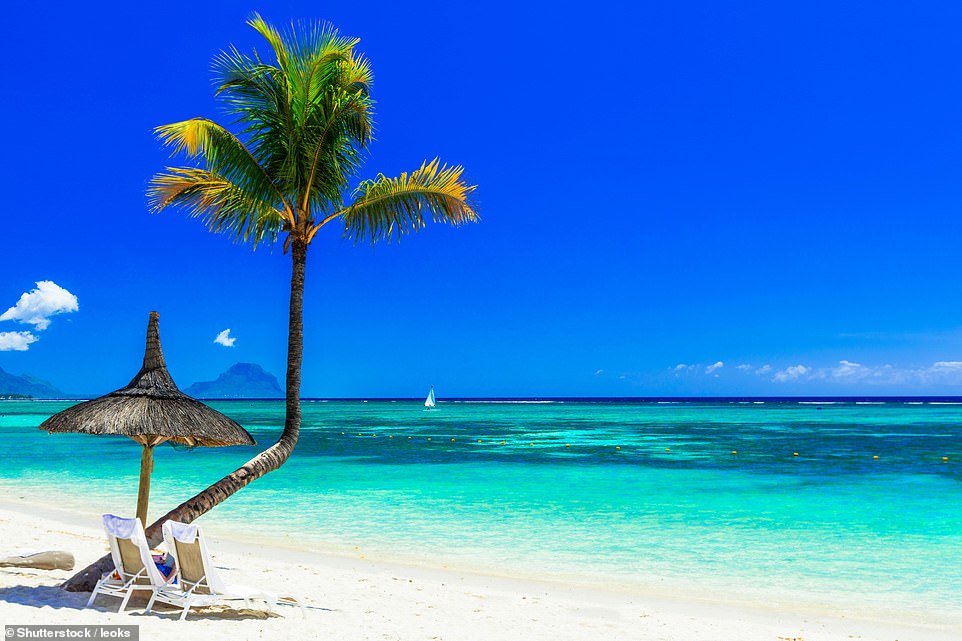 Brits could find holidays with up to a third off to Mauritius, which is the Indian Ocean isle once dubbed ‘heaven’ by Mark Twain

The Indian Ocean isle, dubbed ‘heaven’ by Mark Twain, is great value in 2019, with many operators dealing in sterling. How to spend a week?

SKI AUSTRIA – one third off 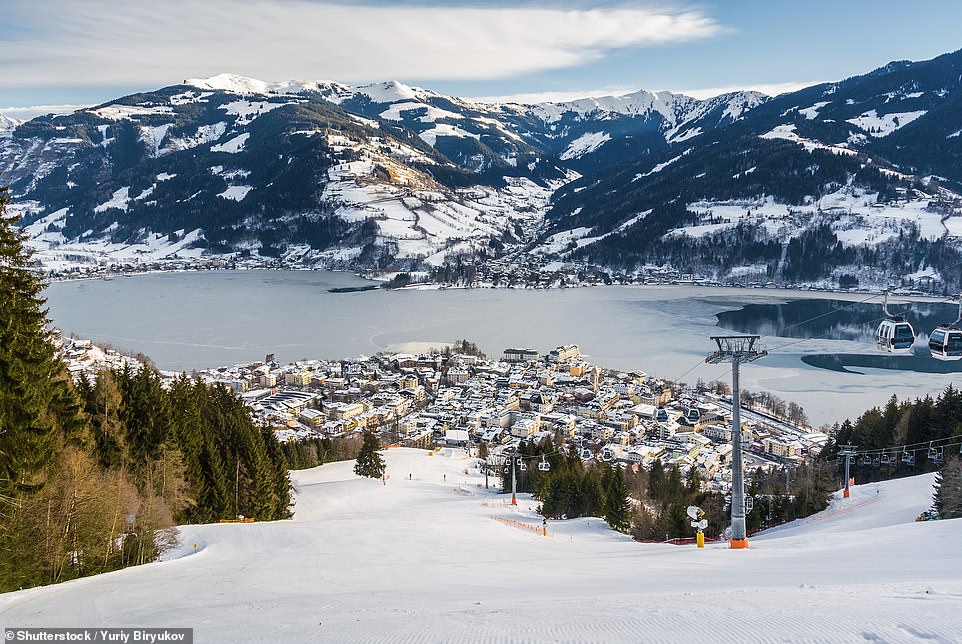 Zell am See, pictured, is one of Austria’s loftier resorts and a seven night half board break at the four star Hotel Lebzelter later this month has a third off

When you’re done with the snowy peaks, enjoy a glass of something cold in the brilliant sunshine.

SCANDI SAILING – 60 per cent off 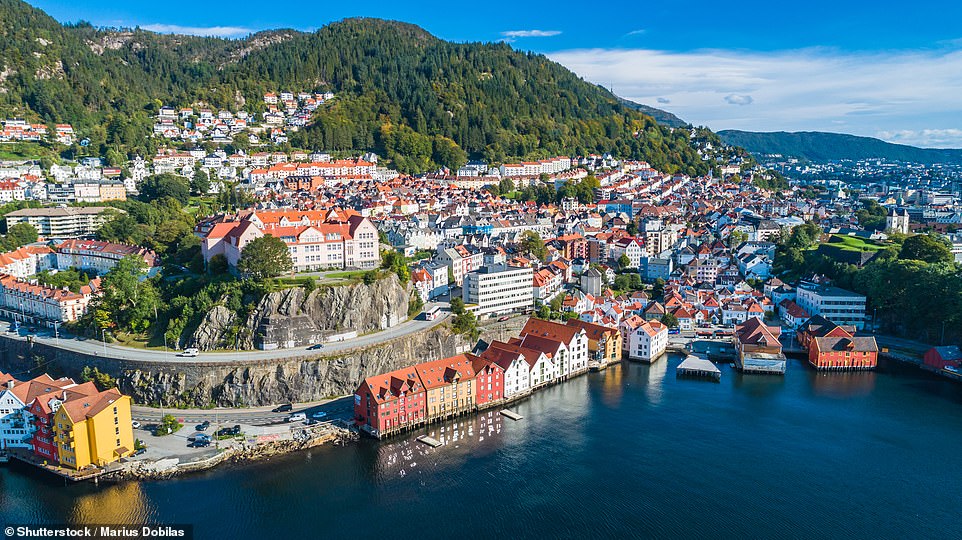 An all-inclusive return cruise from Poole to Norway departing on April 13 has 60 per cent off. It calls at Dunkirk, Rosendal and Bergen, pictured

European holidays at sea look set to glide on unaffected by Brexit and leaving from a UK port means you’ll dodge any airport logjams.

With all-inclusive on board, too, there’s even more bang for your buck. The best cruise deal we found?

A nine-night adult-only return sail from Poole to Norway, with stops including Dunkirk, Rosendal and Bergen. 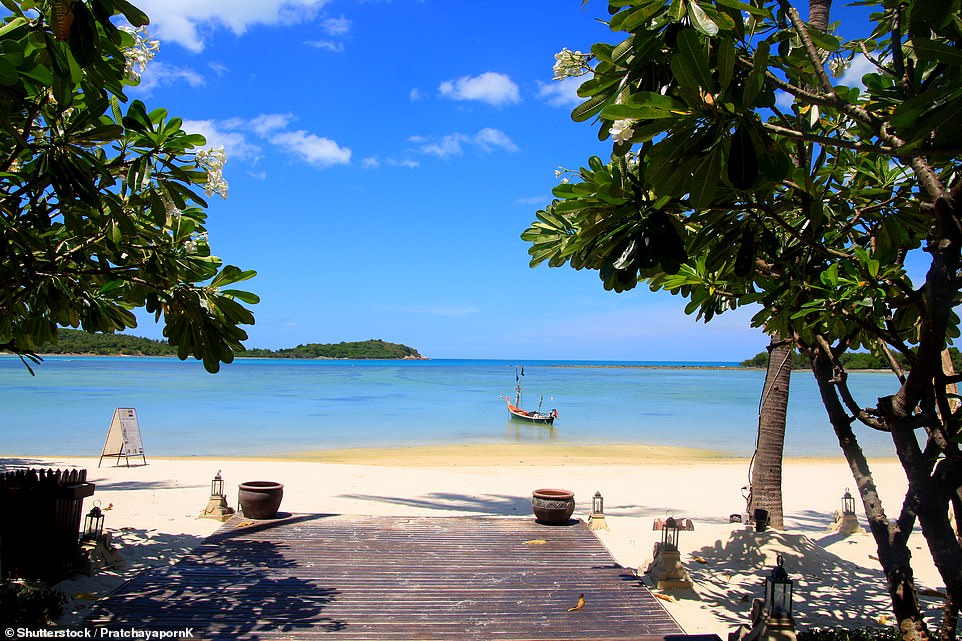 There are also savings on holidays to the Far East with seven nights in an ocean pool villa in Samui, pictured, in Thailand having 40 per cent off

Take advantage of the second longest school holiday of the year with a sojourn to the Far East.

Spa brand Six Senses is offering a hefty discount on its resort in Samui, Thailand.

BOOK IT: Seven nights in an ocean pool villa suite now costs £8,895 per family of four — saving £3,105 — plus children stay and dine free. Price includes flights from the UK and private transfers, turquoiseholidays.co.uk, 01494 678400.

WHAT HAPPENS IF MRS MAY’S BREXIT DEAL GETS THROUGH?

The Government has reassured UK travellers that it’s business as usual for those heading to EU countries until at least December 31, 2020. However, from March 29, Britons must have at least six months left on their passports to guarantee travel and should expect delays while border staff check issue dates.

Some pre-holiday admin will be required too; if you’re planning on driving in the EU on a UK licence, you will need an International Driving Permit (IDP), which costs £5.50 from the Post Office. The European Health Insurance Card (Ehic), which currently covers UK citizens for urgent healthcare while staying in EU countries, will remain valid until December 31, 2020.

Ferry and cruise journeys are already based on international rules, not EU ones, and so are expected to operate as normal. Coach and rail travel, including the Eurostar, is also likely to remain unaffected — though you should check with your operator ahead of travel. 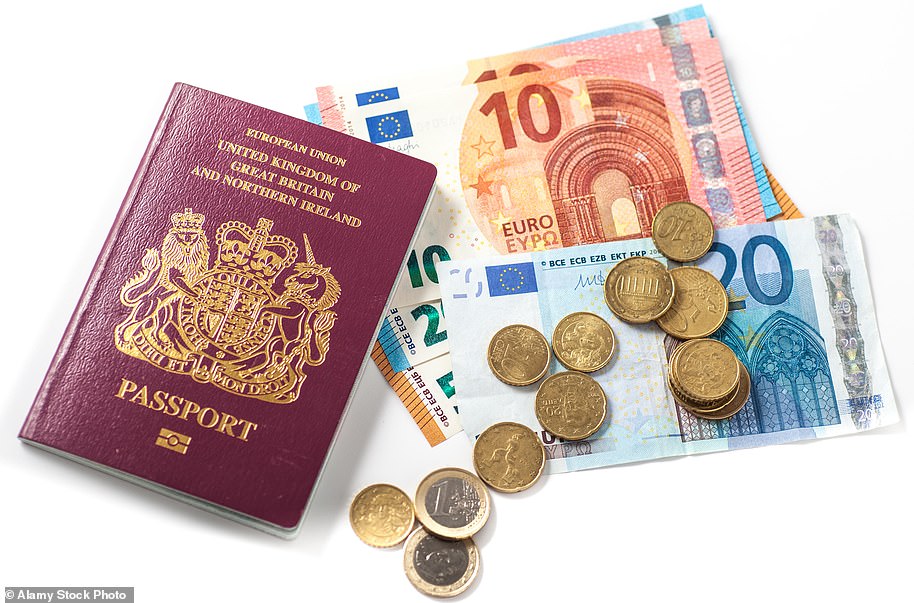 The Government has reassured UK travellers that it’s business as usual for those heading to EU countries until at least December 31, 2020, if Mrs May gets her Brexit deal through

Plans for a visa exemption system, similar to the ESTA one used for travel to the U. S., looks likely to be introduced by 2021, and is estimated to cost around €7 per person.

AND WHAT IF THERE’S NO DEAL?

Flights will operate as normal, the EU has said, with UK passports likely to be unaffected until a new travel deal is negotiated in 2020 — though after March 29, UK citizens travelling to the EU will need at least six months’ validity on their passports.

Travel by rail (including Eurostar), ferry and on cruise ships should not be affected.

Driving in the EU will require an International Driving Permit (IDP) and UK drivers may need extra paperwork to hire a car. Applications are available at the Post Office.

Driving a UK-registered car will require a green card, which you can get in advance from your insurer.