Kissing and hugging people when you greet them has been branded as awkward and not a ‘traditionally British’ thing to do.

Discussing whether or not the UK’s exit from the European Union would mean the end of the double kiss, Good Morning Britain presenter Richard Madeley said it was something that started as we were just ‘copying the Europeans’.

This is while journalist Ellen Scott felt it was unhygienic saying she would prefer a wave rather than any physical contact and said that French and Italian people can pull off the kiss, while Brits can’t.

Richard said that sometimes not knowing what to do can lead to awkward situations.

Ellen Scott (left) said she would prefer a wave, while Christine McGuinness (right) said we shouldn’t be encouraging people to stop hugging

Ellen, who is the lifestyle editor at newspaper Metro, said: ‘If I can get in there first I will stick out a hand for a handshake or even better just a wave – waving is great, usually I’m too late and they will lean in for a kiss and it will be awkward.’

‘I’ve always been less touchy feely but there have been too many times where I have gone in and ended up kissing someone’s ear and it’s just incredibly awkward.

‘I think with men and women there is also the chance that a hand goes too low and it can be misconstrued. I would feel the same about women and it’s about respecting people’s boundaries.’

This is while the Real House Wives of Cheshire’s Christine McGuinness disagreed and said she felt a hug was a warm welcome and that sometimes, ‘people just need a cuddle’. 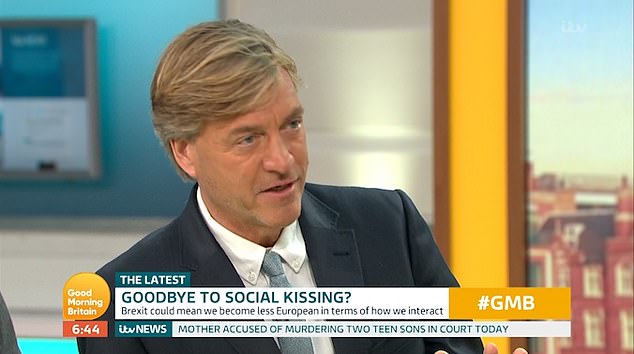 She added: ‘I hug my accountant! I don’t see a problem in it it’s a warm welcome, a nice thing to do.’

Richard, who has been standing in for Piers Morgan this week, said he grew up at a time when British people did not kiss when they met and said when it started to happen it ‘felt off’.

‘We were copying other Europeans, it’s not a naturally British thing to do.’

Ellen agreed with the 63-year-old and said: ‘British people are naturally awkward. French and Italians can pull off a cheek kiss, British people can’t.’ 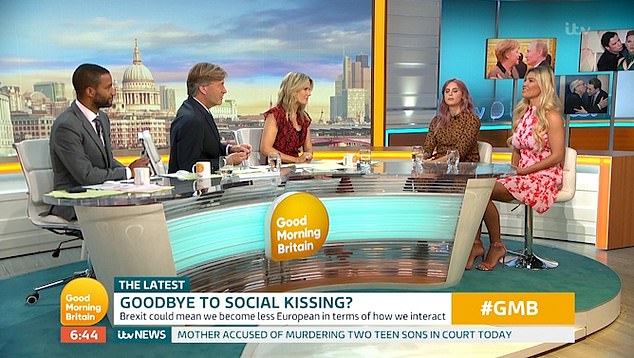 She also said she would dread a meeting with Europeans as she would be worried they would go in for the double kiss, but highlighted that she would respect it as it is something which is part of their culture.

Suggesting an alternative to the double kiss, Charlotte Hawkins asked whether or not Ellen felt there should be a ‘movement started’ to encourage people to shake hands rather than kiss.

Ellen stated that it was personal preference and says she feels the handshake is a base every one is comfortable with.

However, Richard highlighted how the close contact with other could lead to ‘unpleasant experience and referenced Jean Claude Junker and his greetings. 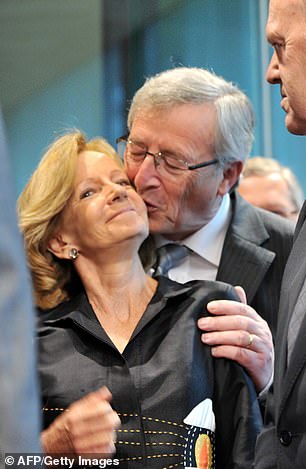 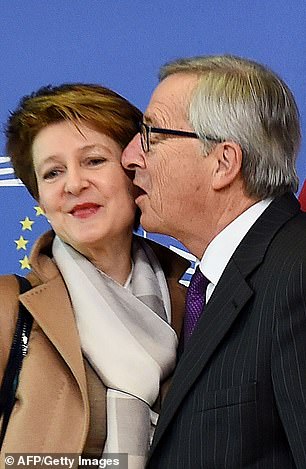 Jean-Claude Junker has previously been criticised for the way he greets people, left with Spanish finance minister Elena Salgado and right with Swiss politician Sommaruga 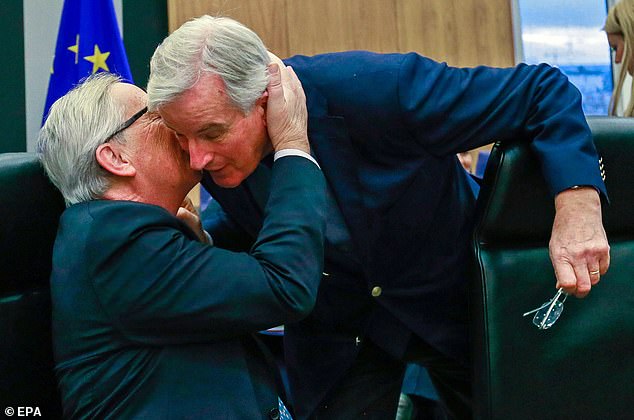 ‘Supposing Junker would totter in here after a heavy morning and come up to you – and as you would say wreaking of booze, you wouldn’t want that in your space?’

Christine said that if people are uncomfortable with a kiss as a greeting, then it’s up to them to say.

‘I don’t think we should encourage the rest of the nation to not hug. I can’t imagine seeing friends and family and not going and putting my arm around them and giving them a kiss.

‘People I have met on a first occasion, I would still go over and just do one kiss, I don’t like the double kiss I think that does get awkward, I would go right and arm around.’

Richard said that as a man he has now stopped going in for the kiss with female acquaintances as he thinks we need to be ‘sensitive to social changes’. 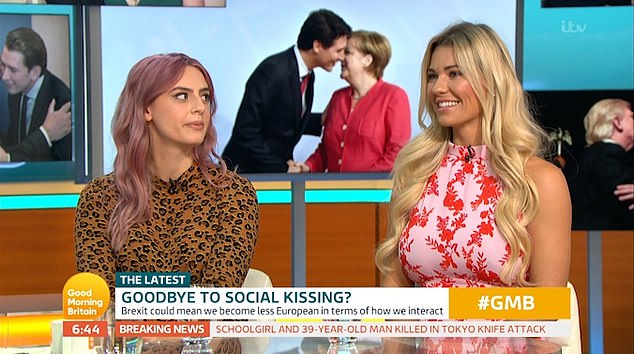 Ellen and Christine has opposing views on the top, with Christine saying she couldn’t imagine not embracing someone when she met them

‘I now don’t lean in to a woman to do the mwah mwah but if she leans in to me I will respond but I don’t initiate it.’

In response to this Ellen said: ‘It’s definitely a gender thing, I have been at meetings where all the men will get handshakes and then they will get to me and do a cheek kiss it just feels very odd and a bit off.’

Richard poked fun at Ellen and mocked her feelings towards hygiene, saying ‘you wont catch anything’.

This is while Charlotte quoted a study and said that you can catch more germs from a handshake than a hug.