Fans hailed the World Cup’s ‘Manic Monday’, as the opening two fixtures of the day contained a total of 11 goals.

In the opening game, scandal-hit Cameroon came from behind to draw 3-3 with Group G rivals Serbia.

Then Ghana won the second match of the day, defeating South Korea 3-2 in Group H to claim their first points of the tournament so far.

As Opta revealed on Twitter, it meant that it was the first day with multiple five-goal games at the World Cup since 1990, when Czechoslovakia hammered the USA 5-1 and West Germany defeated Yuogslavia 4-1 on June 10.

The official FIFA World Cup account may have summed it all up with their simple tweet. ‘Football.’

Game three brought a 1-0 win for Brazil, taking the goal total on Monday up to 12 thanks to Casemiro’s impressive half-volley late on.

There is still Cristiano Ronaldo’s Portugal, up against Uruguay, to come, too, in the late kick-off.

As well as officials, fans at home were delighted by the events unfolding on the pitch in Qatar.

One Twitter user reacted, saying: ‘What a crazy day of football already’, while another said: ‘What is going on in the World Cup today oh my days’.

A third person tweeted: ‘The football today has been unreal’.

Many were quick to pull out the calculators as the goals piled up.

One fan wrote: ‘TODAY HAS BEEN NOTHING BUT PURE ENTERTAINMENT!!! 11 GOALS IN 2 GAMES’, while a further comment said ’11 goals already in less than 2 games today’, before looking ahead to the Monday’s other games, adding ‘Wow!’

The day’s madness began at the Al Janoub Stadium, where Jean-Charles Castelletto opened the scoring for Cameroon within half an hour.

However, Serbia were in front by half-time through Strahinja Pavlovic and Sergej Milinkovic-Savic.

Aleksandar Mitrovic put Serbia in a commanding 3-1 lead eight minutes into the second half, only for Vincent Aboubakar and Eric Maxim Choupo-Moting to pull the Africans level.

Aboubakar’s scoop finish was initially flagged for offside, but was awarded following a VAR check. It has led to some calls that it is a contender for the goal of the tournament, as reported elsewhere by Sportsmail today. 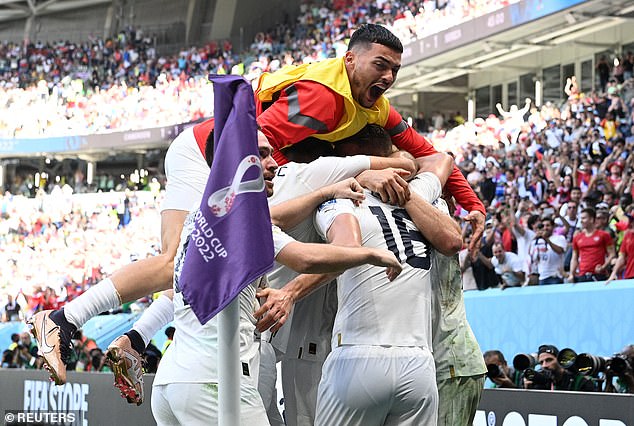 Serbia went 3-1 ahead in the opening match, but were pulled back to a draw by Cameroon

Just an hour after that match, Ghana came into the Education City Stadium looking for their first points of the World Cup. They took the lead through centre back Mohammed Salisu, before Ajax midfielder Mohammed Kudus doubled their advantage before the break.

South Korea pulled it back level in the second half, with Cho Gue-sung scoring twice. However, Kudus scored a low finish in the 68th minute to secure a 3-2 win.

There were fewer goals to cherish in the day’s third clash, as tournament favourites Brazil scored just once, but Casemiro’s 83rd-minute thunderbolt was enough to see off Group G rivals Switzerland. It took the daily tally up to 12 goals. 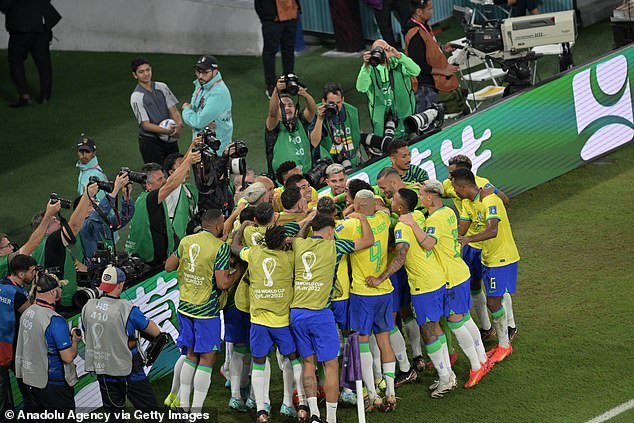 Brazil only mustered one goal in their win over Switzerland, booking their place in the last-16