A drunk driver who almost killed a retired couple before later falling asleep at the wheel while high on drugs has had her lifetime driving ban overturned.

Sophie Lauren Chambers, 32, has a long history of driving while intoxicated or high on drugs which almost resulted in the death of Colin and Jan Clarke in August 2012.

The couple, aged in their 60s, were riding their motorbike in the Currumbin Valley, south of the Gold Coast, before she drunkenly veered into their path.

The pair survived but were left with critical injuries that required them to be hospitalised, according to the Gold Coast Bulletin.

Chambers was sentenced to three years in jail in 2014 for the crash and was banned from driving for life.

But as soon as she was released in 2017, Chambers got behind the wheel, unlicensed, while high on drugs and fell asleep at a Hungry Jack’s drive-through.

She was then convicted for drug-driving.

Chambers pleaded to Southport District Court on Friday to let her have her licence back claiming she lived in a remote area where there was no public transport.

The mother-of-three told Judge David Kent she needed to drive to pursue her career as a medical receptionist and noted she was undergoing rehabilitation. 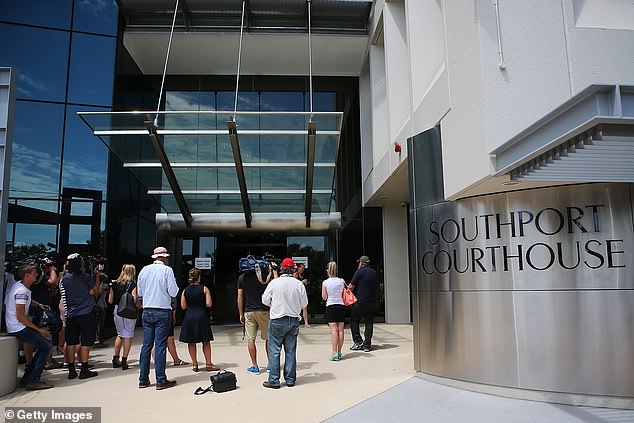 She faced Southport District Court (pictured) where Judge David Kent told her he agreed that she should have her licence back, citing her successful rehabilitation and career goals

Judge Kent agreed with her reasoning and overturned the lifetime driving ban.

‘(Chambers) has provided sufficient reasons for the removal of absolute disqualification,’ he said.

‘She is not only recovering from substance abuse but her mental health is well managed.’

The Department of Transport and Main Roads will now determine if Chambers will need to resit a test for her driver’s licence.