A 29-year-old man who held off police during a three-hour siege in a service station is facing 15 charges, including armed robbery and carjacking.

At about 7.45pm on Friday, the man allegedly threatened a taxi driver with a firearm and forced him to drive to a service station located in Southport on the Gold Coast.

There, the man allegedly shattered the glass door of the business with the firearm before threatening an employee and leaving with cash from the till.

He then carjacked a sedan, police allege.

The vehicle was spotted by PolAir a short time later. The man allegedly stole a third car at the intersection of Wardoo and Johnston Streets by threatening the four occupants with his firearm.

Police successfully stopped the car with spikes on Nerang Street.

The man fled the car and ran to another service station nearby where he allegedly threatened the employee, who escaped, and police officers who arrived soon after.

Police locked down the area and declared an emergency as a siege began.

Negotiators talked the man out three hours later and he was arrested without further incident at midnight.

Scott Amos was with his son, 20, when they stopped at an intersection at 8.10pm when the alleged gunman approached in another car with two flat tires, he told the Gold Coast Bulletin.

Mr Amos then ‘whacked the car in reverse (and) bounced over the median strip’ to escape.

The man then got out the car and approached – blocking them in – while holding a ‘huge hand pistol’.

Mr Amos then passed a police car and explained to them the series of events, but by this time authorities had already tracked the man down to a service station.

A 29-year-old man has since been charged with 15 offences including five counts of armed robbery, three counts each of wilful damage and unlawful use of a motor vehicle, two counts of serious assault on police while armed, and one count of dangerous operation of a vehicle with prior conviction and unlawful possession of a weapon.

He is due to appear in Southport Magistrates Court on Saturday morning. 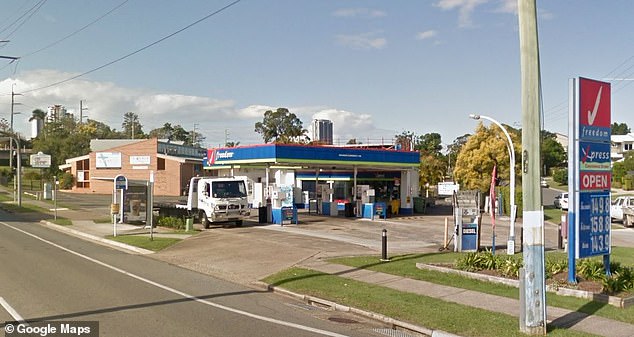