A man was a financial burden to his family, but his wife of 30 years paid the ultimate price – when he bashed her repeatedly on the head with a hammer before strangling her to death, their son says.

Almost four years to the day after Gaylene Cobby – known as Kym – died outside her Gold Coast hinterland home, a jury has found Andrew John Cobby guilty of her murder.

Her family members sobbed as the jury returned their verdict in the Brisbane Supreme Court on Monday, while Cobby sat quietly, showing no emotion.

51-year-old Gaylene Cobby (pictured) – known as Kym – was repeatedly struck on the head with the hammer then strangled while taking out rubbish at her Worongary home on November 12, 2017 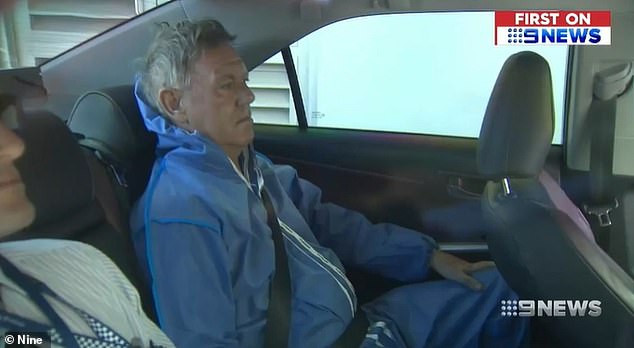 A jury rejected version of events given by Andrew John Cobby (pictured), handing down a guilty verdict on Monday after deliberating for just over a day.

The 51-year-old woman was repeatedly struck on the head with the hammer then strangled while taking out rubbish at her Worongary home on November 12, 2017.

Cobby, now 59, admitted being present during the attack on the woman he had married more than three decades earlier – although they mostly lived apart from 2003 – but denied being responsible.

Instead Cobby told police an unknown assailant was behind the killing, ambushing his wife as he was about to get into a red Chrysler he had borrowed, the Brisbane Supreme Court trial heard.

But a jury rejected his version, handing down a guilty verdict on Monday after deliberating for just over a day. 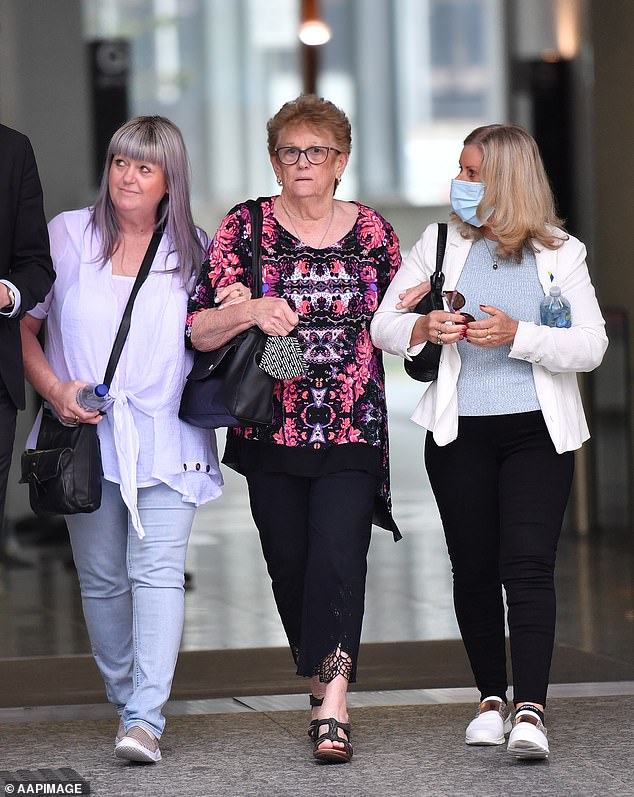 The victim’s family, including her mother (pictured, centre) went to court to see justice done for the beloved mum

In sentencing the 59-year-old to life behind bars, Justice Peter Callaghan told Cobby his crime was clearly pre-meditated and sickening.

‘It is just frightening that you have maintained a murderous intent for the length of time that it took to extinguish Kym’s life, even as she fought, valiantly it seems, to remove your hands from her throat,’ he added.

Justice Callaghan said the relationship between the pair was unusual but had persisted.

‘She was actually the only support you had in life,’ he told Cobby.

‘In your whole life there was one person that stood by you and you did these extraordinary things to her.’ 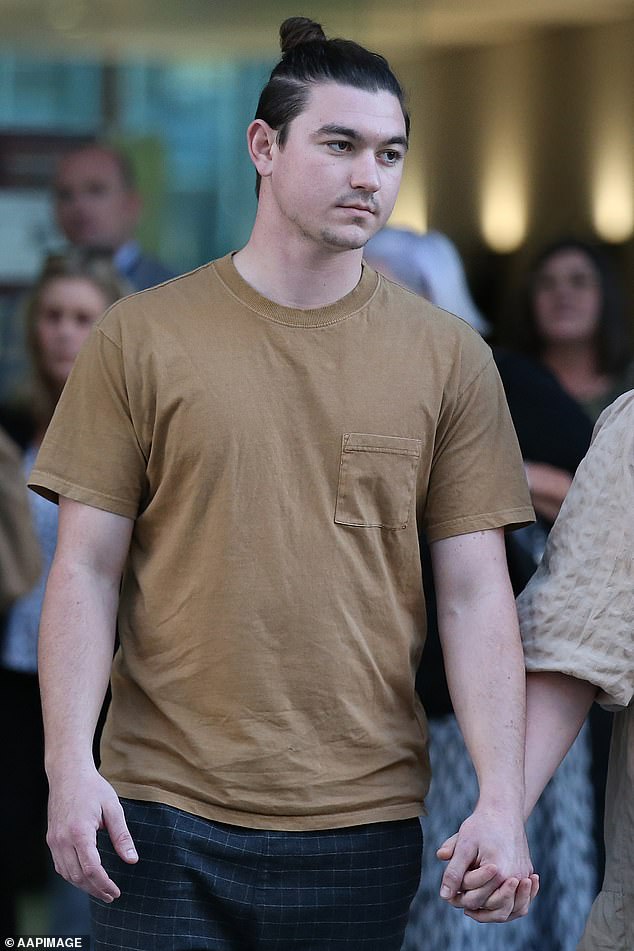 Luke Cobby (pictured) said he has had to relive the nightmare of seeing his mum bashed, strangled and deserted on the street

Justice Callaghan told Cobby he could still do one remarkable thing in his life if he found it within himself to ‘simply tell the truth’.

Justice Callaghan commended the couple’s children and other family members who had been suffered ‘unimaginable pain’ but who testified and gave statements after the jury handed down their verdict.

‘You have robbed so many people of so much and the grief of the whole family … has been expressed so eloquently this afternoon that it can be accepted that Kym truly had a voice here today, finally,’ Justice Callaghan added.

Luke Cobby said he has had to relive the nightmare of seeing his mum bashed, strangled and deserted on the street.

He told the court his mother had paid Cobby’s rent, helped him move and paid for appointments.

‘The guy was always flat broke but promising outlandish things,’ he added.

‘I guess you could say Andrew was a financial burden to our entire family and mum had to pay the ultimate price at the end.’ 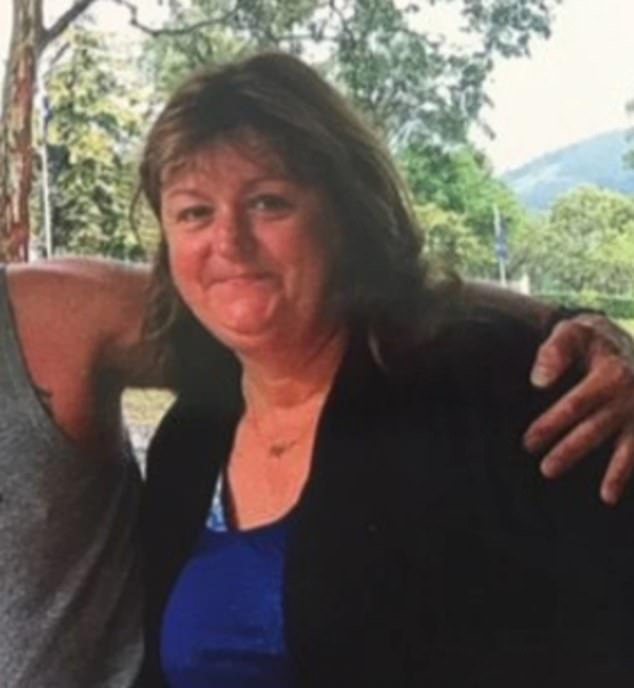 Ms Cobby’s mother Olwyn Schultz cried as she told the court the death of her daughter was the beginning of a nightmare.

‘My heard is broken and the pain is unbearable,’ she said.

‘You have left the biggest hole inside our hearts.

‘What monster does this unforgivable action to an innocent human being and to his own children?’

Cobby claimed – in interviews played during the 17-day trial – that he was at Ms Cobby’s house to protect his family.

‘I have four individuals trying to extort money, but I couldn’t pay them,’ Cobby told officers.

The trial heard he had accepted money to trade on the stock market in return for ‘risk-free bonuses’.

Investors didn’t receive paperwork for handing over up to $170,000, one told the court. 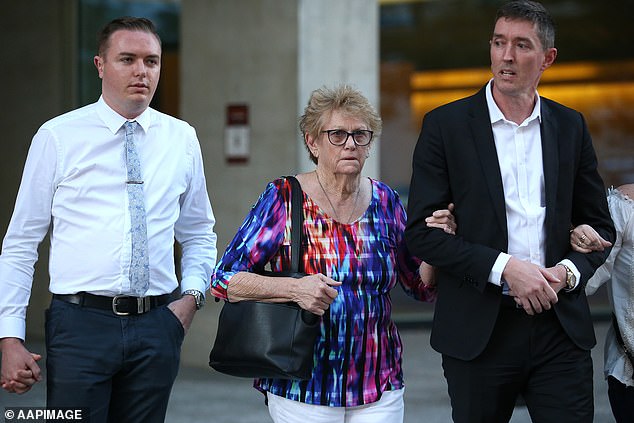 In sentencing the 59-year-old to life behind bars, Justice Peter Callaghan told Cobby his crime was clearly pre-meditated and sickening (pictured, her family at court on Monday)

Justice Callaghan said they had handled his preposterous allegations with equanimity and treated his ‘vile fiction’ with the contempt it deserved.

Cobby ran and hid after the attack until he was found by police about three hours after Ms Cobby’s bloodied body was found by her brother-in-law as he was returning home.

When told his wife had died hours earlier Cobby screamed: ‘No. You are wrong. No, no please tell me it’s not true. It can’t be true.’

The hysterical father-of-three refused to accept his wife was dead during the rambling three-hour police interview conducted at his hospital bed.

Justice Callaghan said Cobby had put on a ‘remarkable performance’ to police after Ms Cobby’s death and had also shed tears in court that appeared to be for himself, not for her.