The 71-year-old Snatched actress looked lovely in a shoulder-exposing black silk top with a long pearl necklace as she attended the grand opening event for JustDance LA at in LA’s Studio City neighborhood.

Also there was Derek Hough of Dancing With The Stars fame. 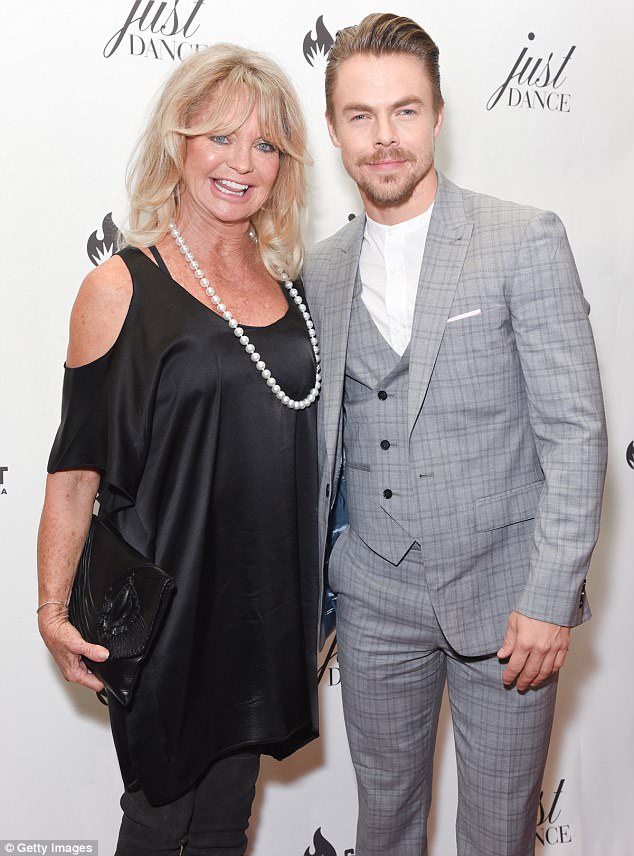 A star meets a legend: Derek Hough looked thrilled to post with the Oscar winner

The Butterflies Are Free actress had on a black silk top that came above her knees and added black leggings as well as over-the-knee suede boots in a dark grey.

The star carried a clutch purse and had a diamond ring on her wedding finger. Her blonde hair looked beautifully styled with soft curls and long bangs.

She is not married to Kurt Russell but has been with him since the 1980s. 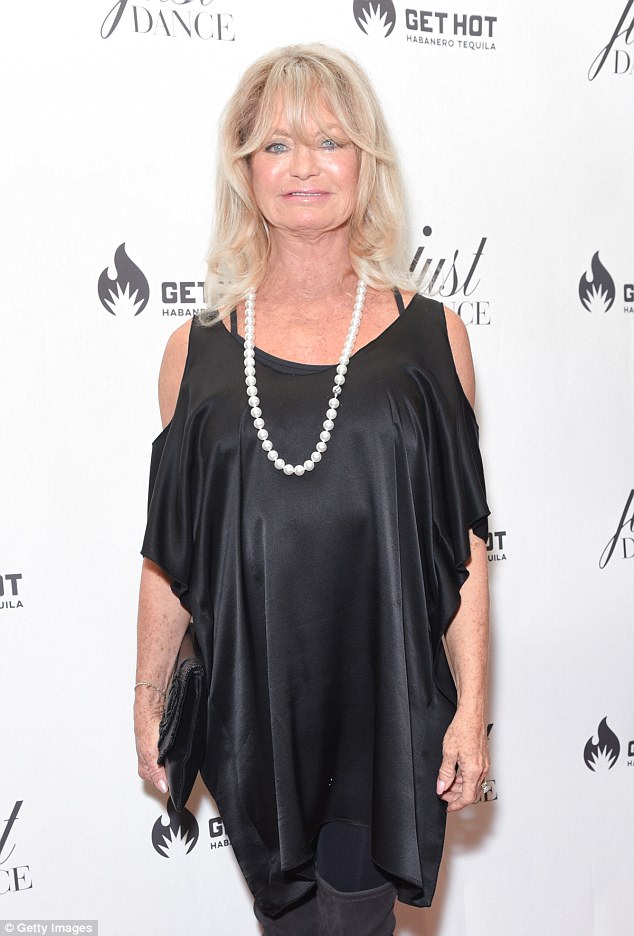 JustDance Los Angeles’ mission is to ‘improve people’s lives by bringing music and rhythm to their minds, bodies and souls.’

They want to bring Ballroom and Latin dancing to a new generation and make it more accessible than ever.

Their instructors are comprised of top world and national competitors and have been featured regularly on Dancing With The Stars, So You Think You Can Dance, and Broadway. 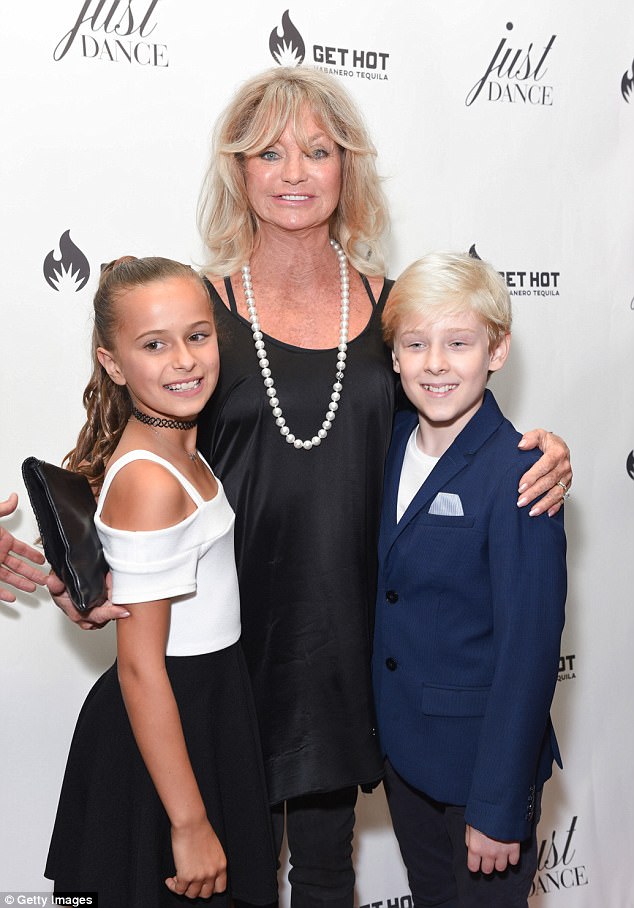 New generation: JustDance Los Angeles’ mission is to ‘improve people’s lives by bringing music and rhythm to their minds, bodies and souls.’ Here Hawn is seen with two guests

‘They are dedicated to providing an inspiration environment that supports the creative growth of any and every single unique individual. JustDance provides salsa, tango, ballroom and Latin classes,’ a press released added.

Although they officially opened in 2016, JustDance only now hosted their grand opening to announce to the public their location and new dance and fitness programs they are offering.

DJ Chris Masterson did the spinning while Haley Reinhart performed. 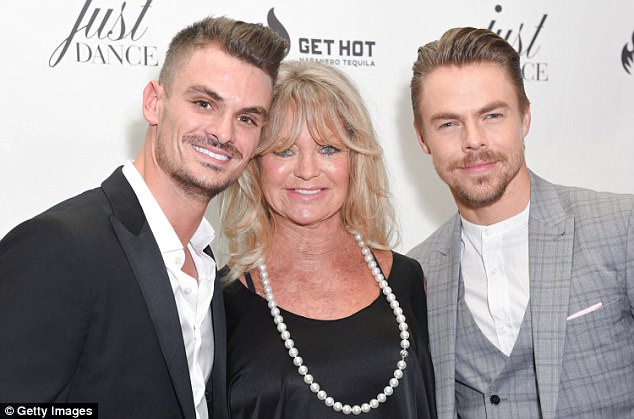 More friends: Hawn and Hough posed with Julz Tocker, who was dapper in a dark suit 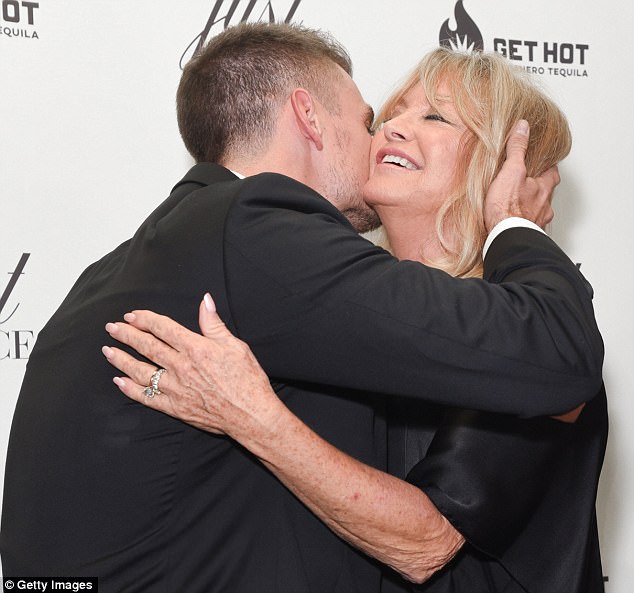 Look away Kurt Russell! At one point Tocker planted a kiss on the Private Benjamin star

Seems Like Old Times star Goldie, who is worth an enviable $60 million, is still going strong with her partner Kurt Russell.

The Hollywood power couple started dating after filming Swing Shift together back in 1984, when Big Trouble In Little China star Kurt was in the middle of divorcing his wife, and have been together ever since.

Explaining the secret to their success, Goldie previously said: ‘A lasting relationship isn’t about marriage. It’s about compatibility and communication. And you both need to want it to work.’ 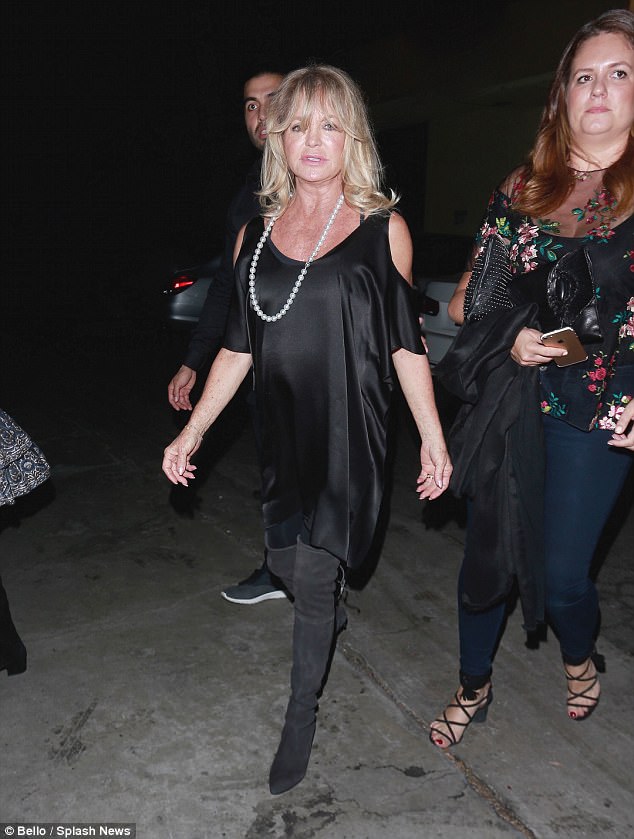 On the way in to the event: The mother of Kate Hudson showed off her kinky boots

Perhaps their most popular creative collaboration is 1987’s comedy caper Overboard, a popular favorite among people of that generation.

The pair decided against getting formally married, though they do have a son Wyatt, who is now 30-years-old, together.

The Oscar-winning actress admitted: ‘I would have been long divorced if I got married.’ 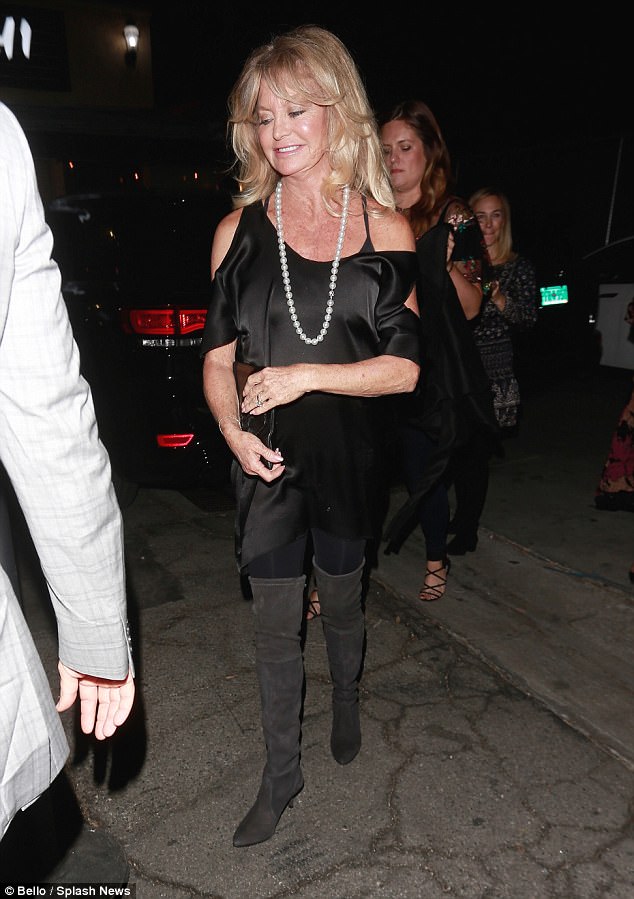 All smiles: The looker was followed by two women; beau Kurt was not in attendance