Good boy! Dylan the Papillon is named Best in Show

A Papillon called Dylan has won the coveted Best in Show prize at Crufts – the first time the breed has taken the top prize.

The much coveted rosette was awarded to the Belgium dog this evening when the competition reached its finale in Birmingham. Dylan was also named winner of the Toy group earlier in the four day dog show.

His owner Kathleen Roosens called him a ‘butterfly’ who she had nicknamed ‘the villain’ for his habit of coming in muddy from walks outdoors.

Judge Dan Ericson, said he had been ‘spoiled for choice’ but that his eyes were drawn to this ‘beautiful dog’ who had ‘everything you could look for in the breed’, plus personality.

Dylan, a Papillon from Belgium, with owner Kathleen Roosens. The dog won the best in show during the final day of the Crufts Dog Show 2019 at the NEC tonight 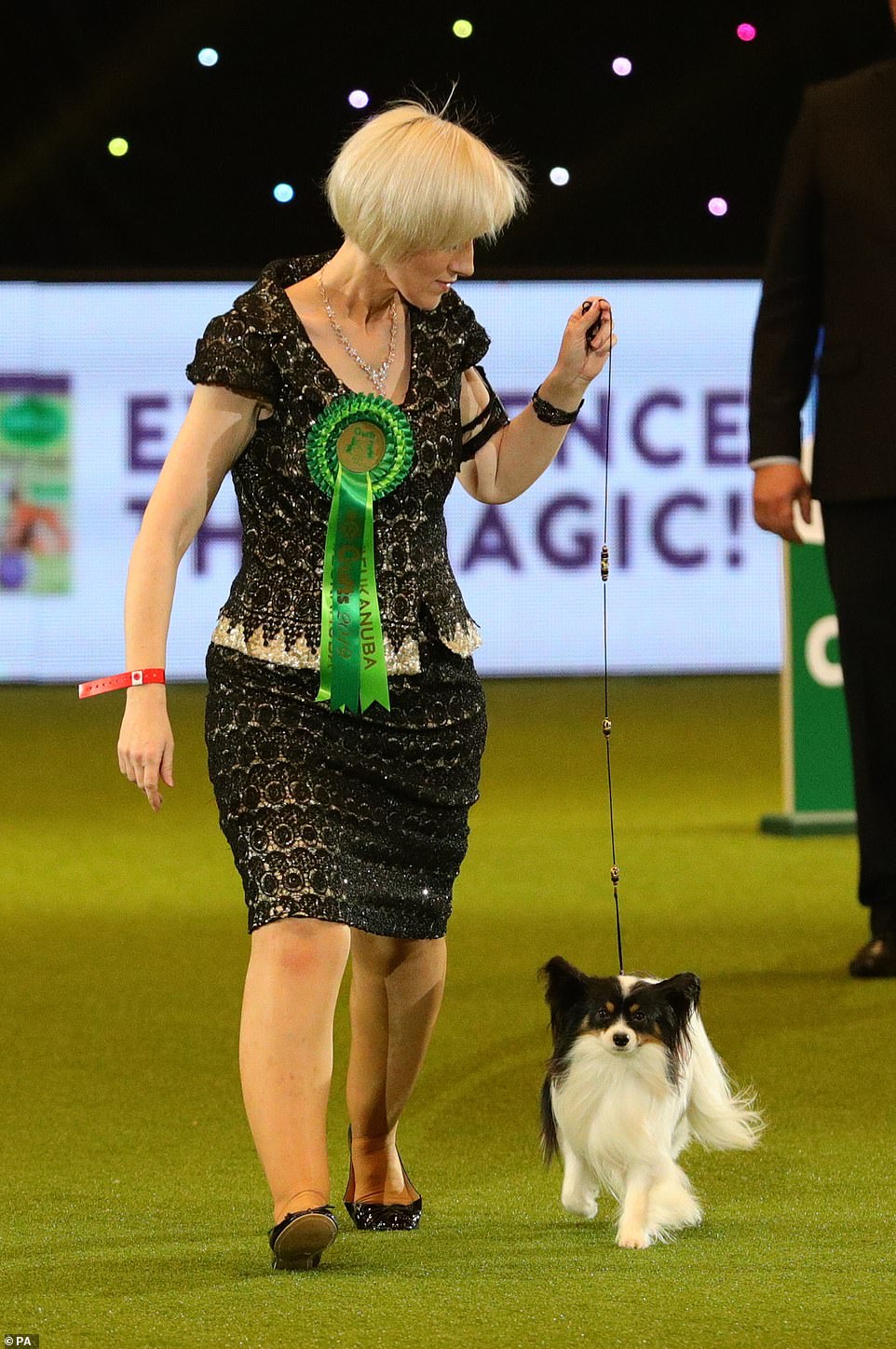 Earlier this evening a Shih Tzu, called Hearty Love Him If You Dare took the ‘best in group’ prize in the Utility category.

Owners of the most well groomed dogs in the business did not leave anything to chance – even if their canine friends were impervious to pressure – with some taking naps in between competition.

The annual event, founded by Charles Cruft in the late 19th century and now held at the Birmingham NEC, brings thousands of dogs to the Midlands city – with thousands of viewers watching the action unfold on television.

Hopefuls tried to take the prestigious award from Tease, a Scottish Whippet owned by Yvette Short who won last year. 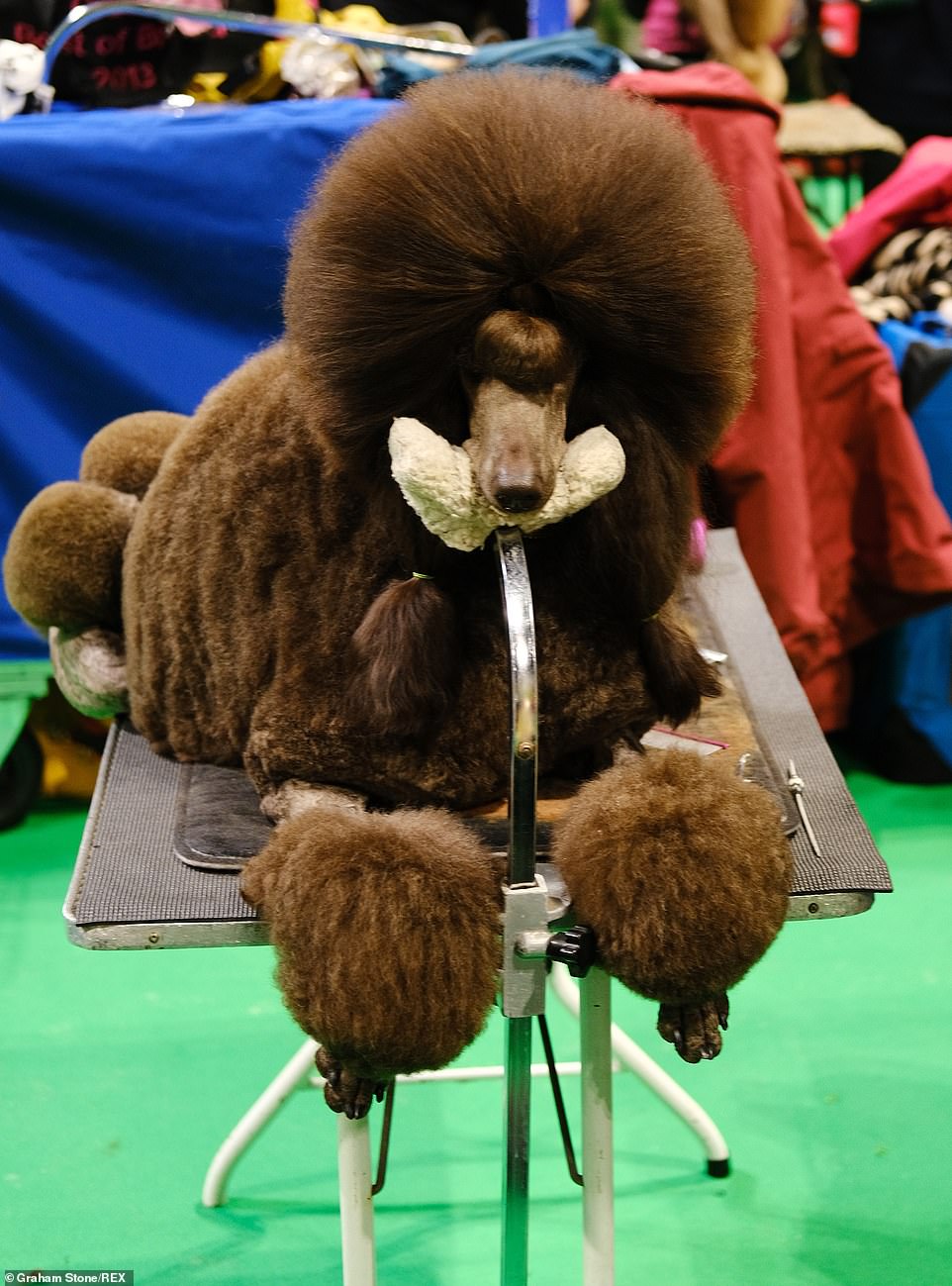 It’s a dog’s life! One furry competitor, a large poodle, sinks its teeth into a sponge while waiting for its moment in the spotlight 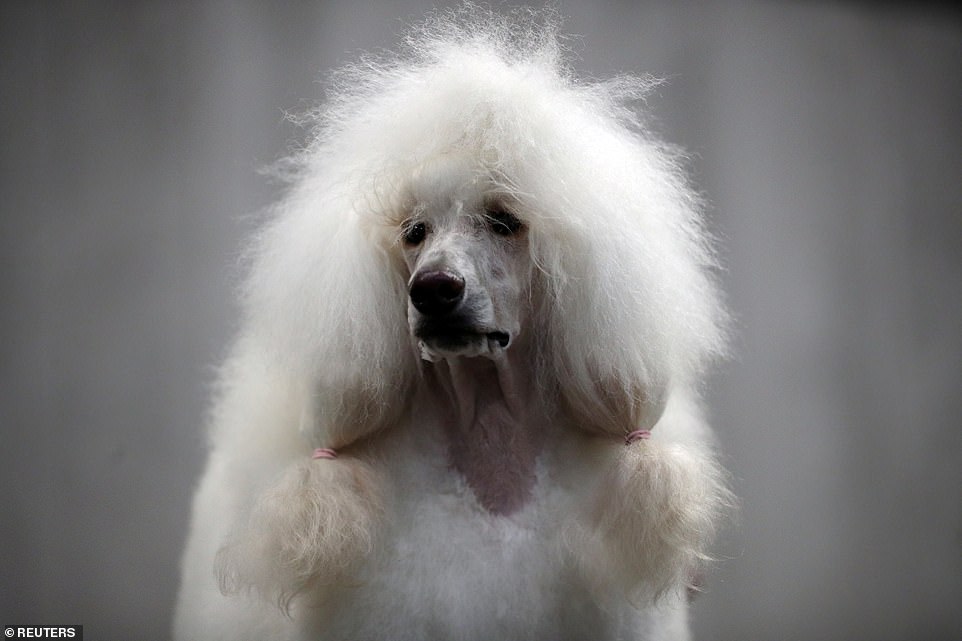 This Standard Poodle is feeling a little dramatic on the fourth day of competition and stares into the distance, perhaps dreaming of a good dinner 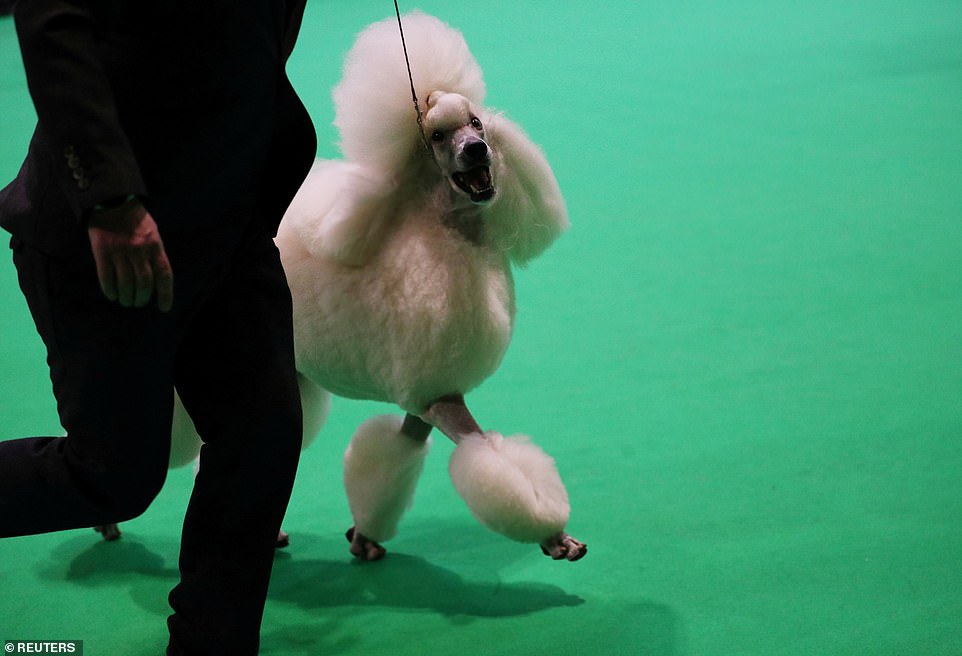 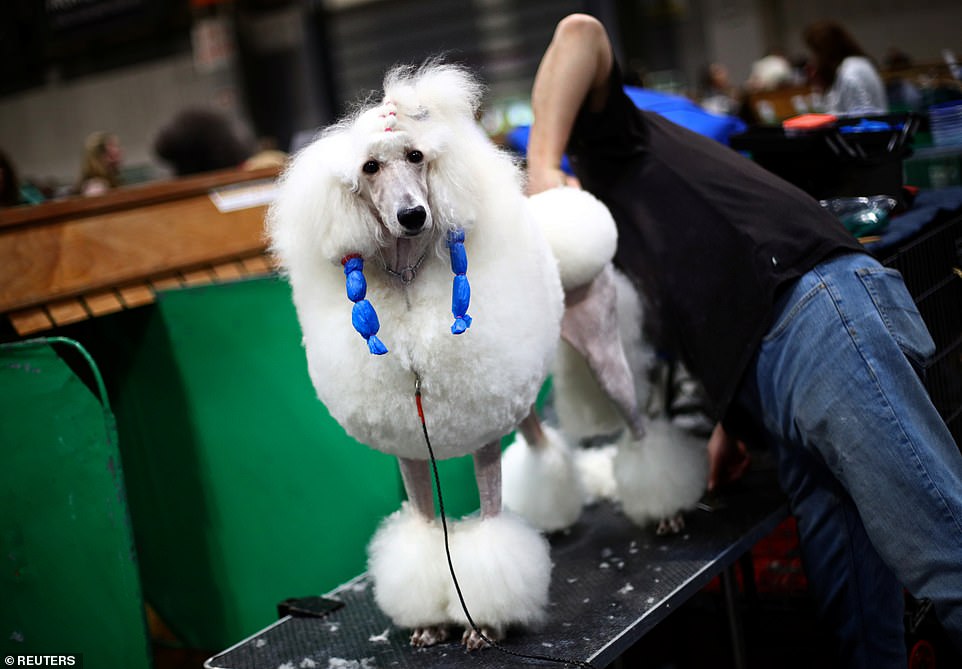 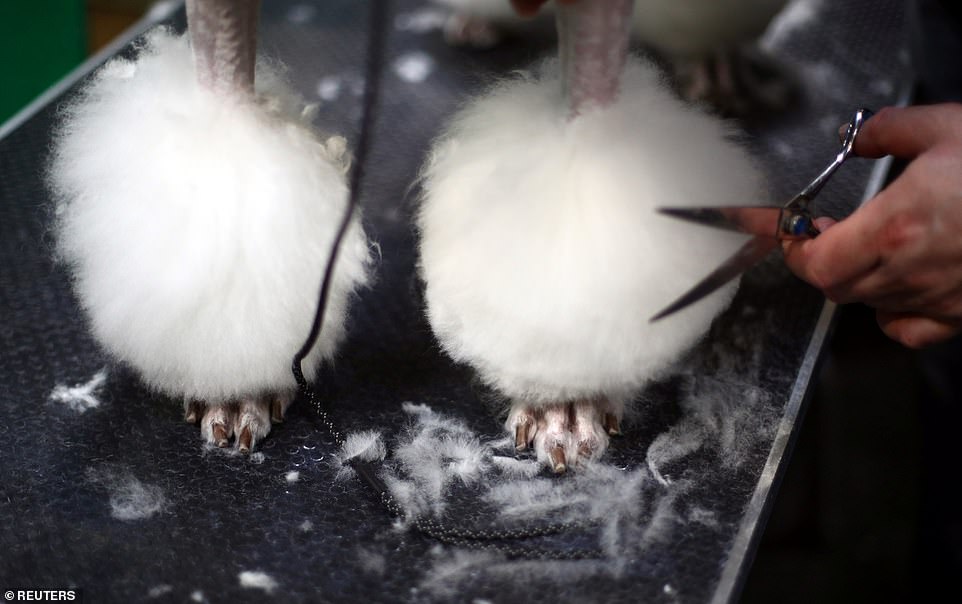 Nothing is left to chance as poodles are groomed before making their way to the arena, down to their puffy ankles

While most dogs have to be satisfied with only watching from the comfort of their homes, this year’s fierce competitors are getting ready for the 128th edition of the competition’s big finish.

The day debuted at 9:30am with the first round of the agility championship, which focused on jumping. 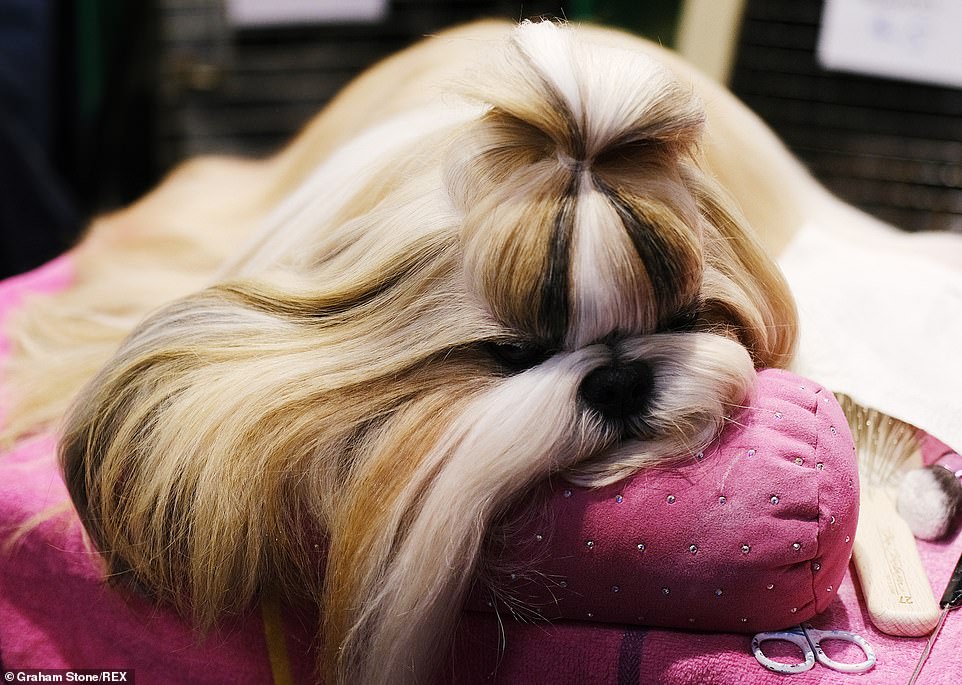 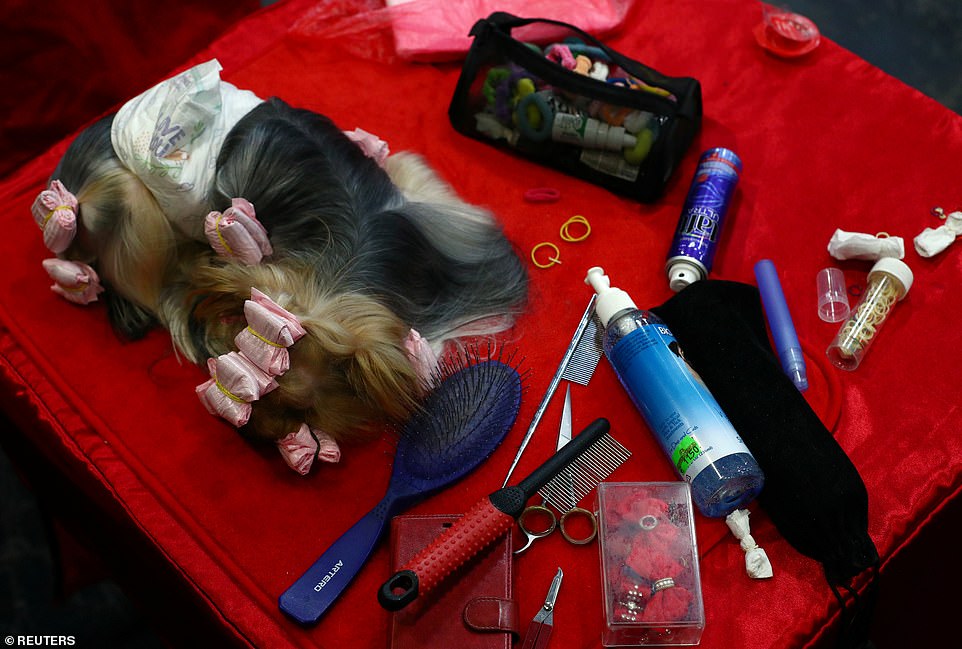 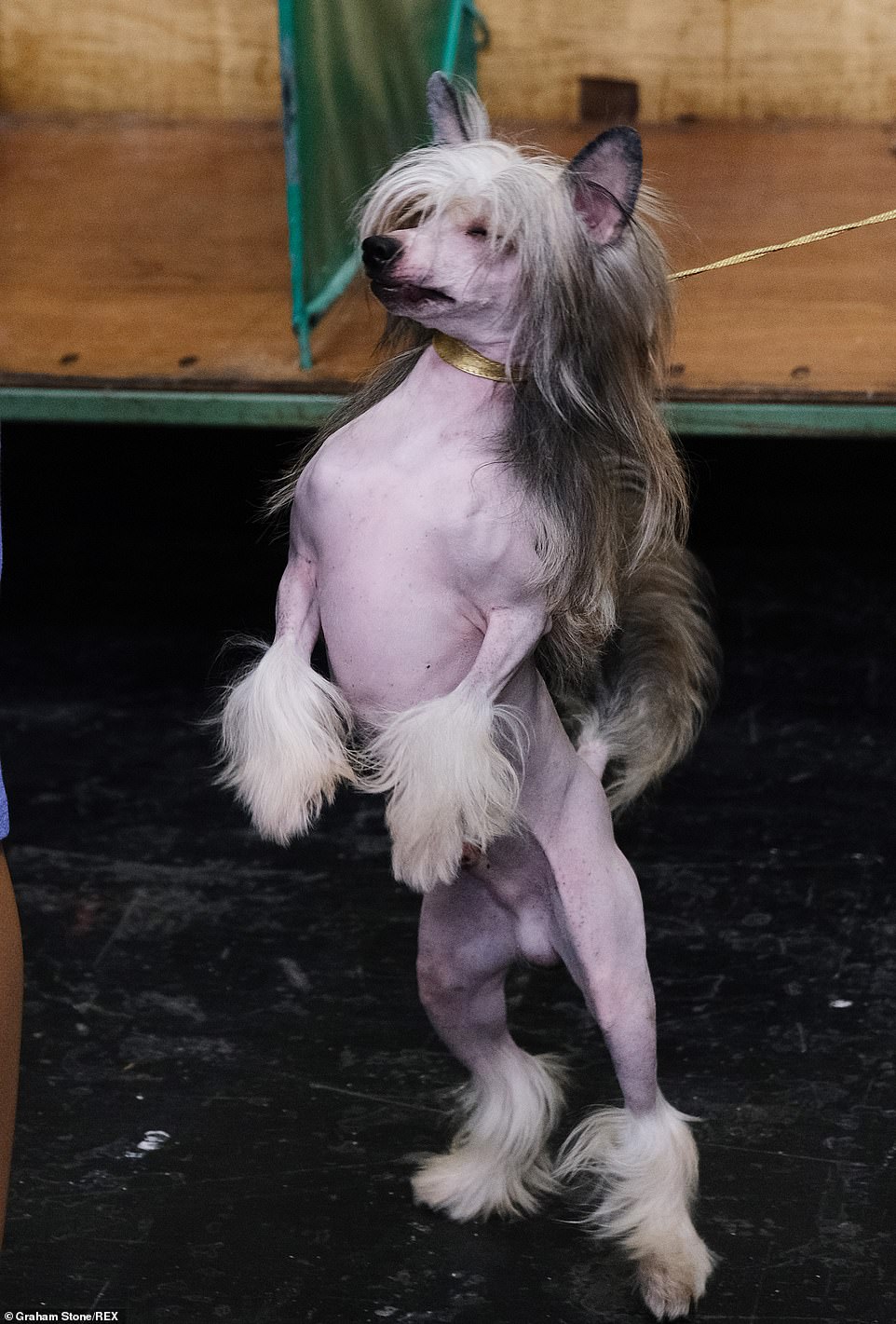 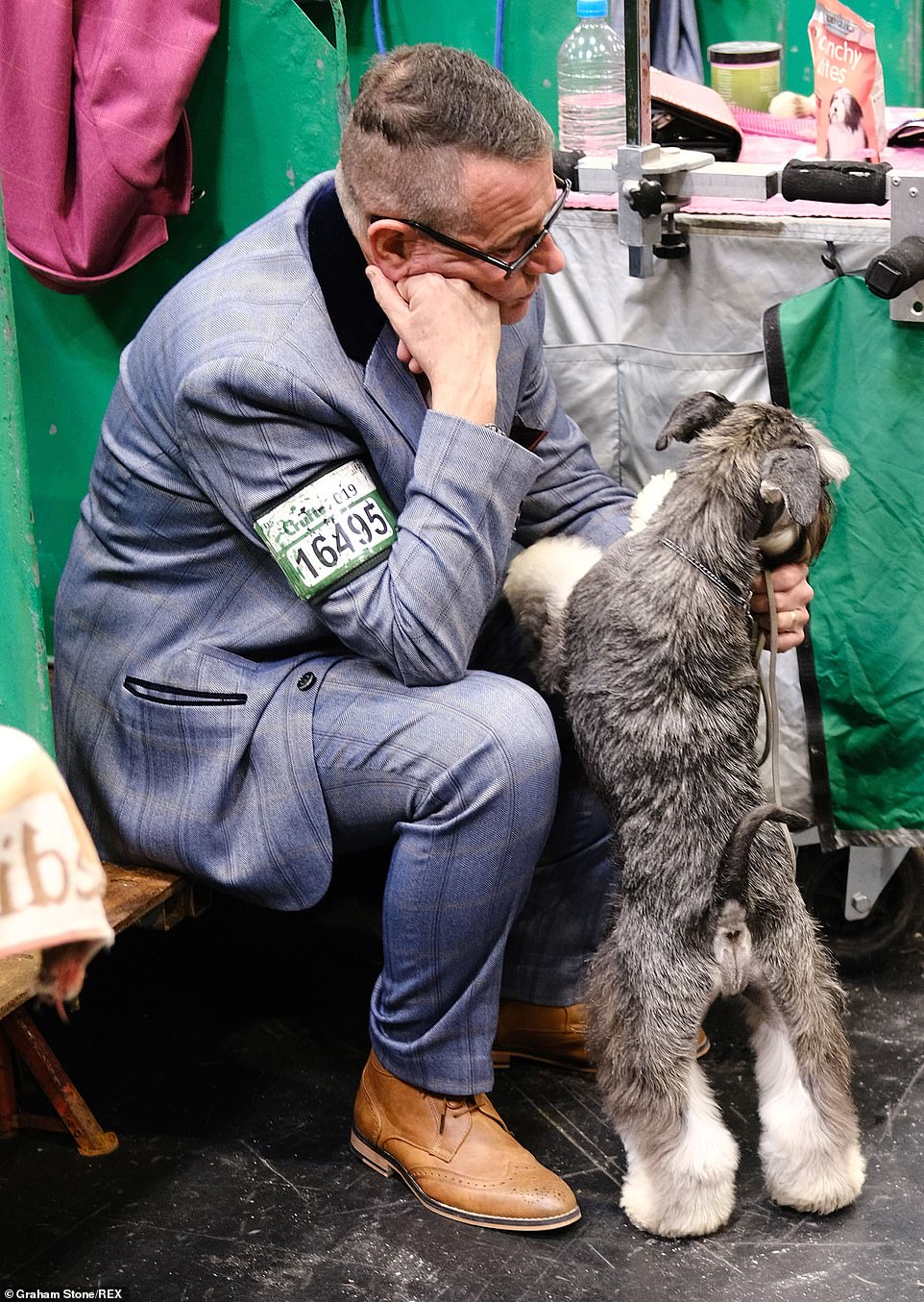 It’s a long wait until Best in Show, which will be awarded tonight at 8pm. This owner bites his time with his furry companion with a well-deserve cuddle session

The second round of the agility competition took place at 11. Soon to follow were the Lowland Search and Rescue at 12:15pm, some heelwork to music at 12:40 and the Gundog Display at 12:45.

At 1:05pm, Southern Golden Retrievers strutted their stuff on the ring in teams.

The four-day-long competition will culminate this afternoon with the agility championship final, the YKC Stakes Final and Presentation and group judging events and presentations for utility and toy.

Later, the Presentation of the Police Dog Team Operational and Humanitarian Action of the Year Award will take place, right before the stage is prepped for the event everybody’s waiting for: Best in Show. 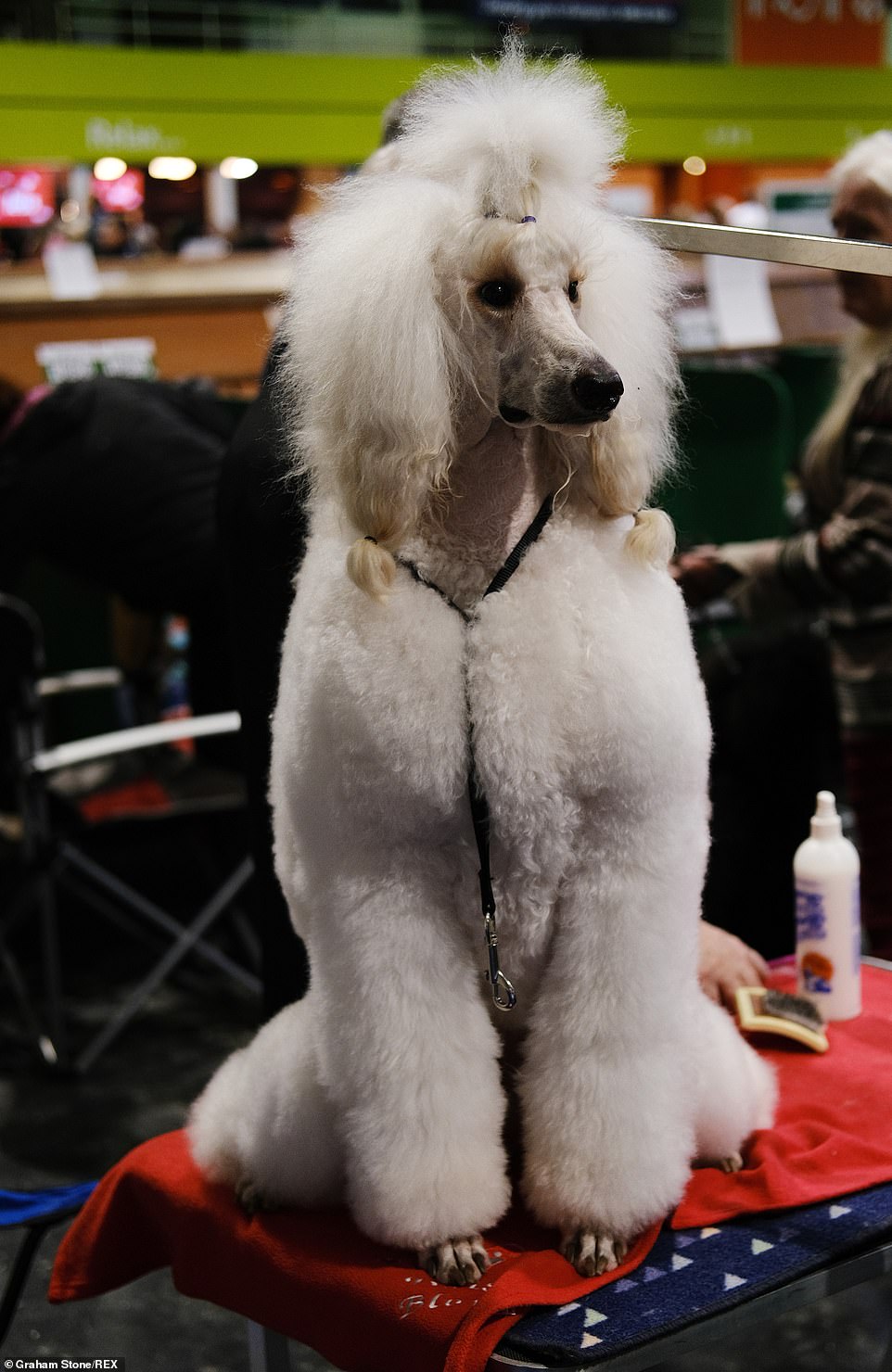 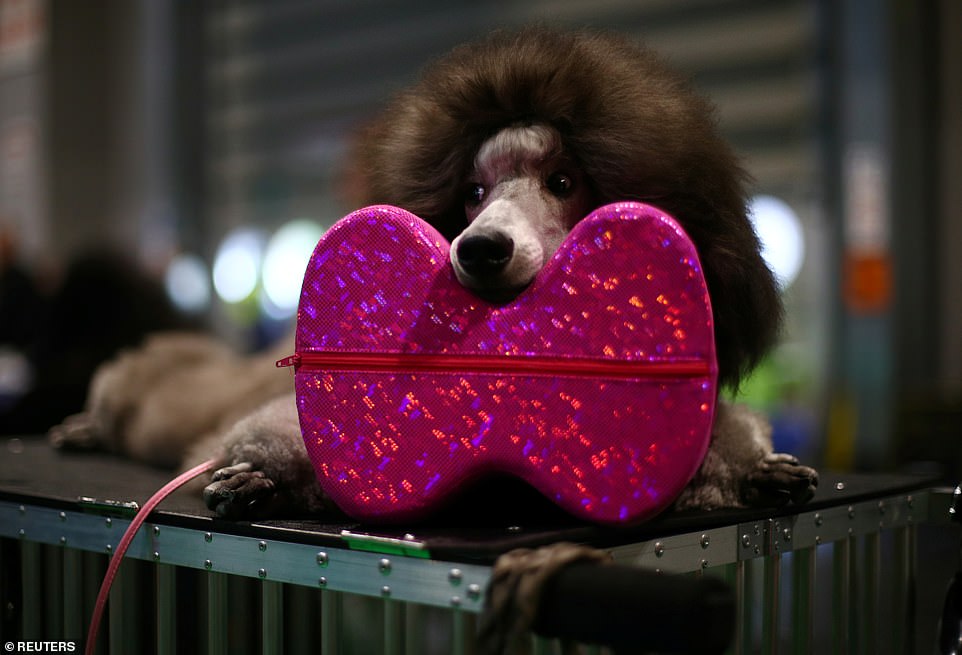 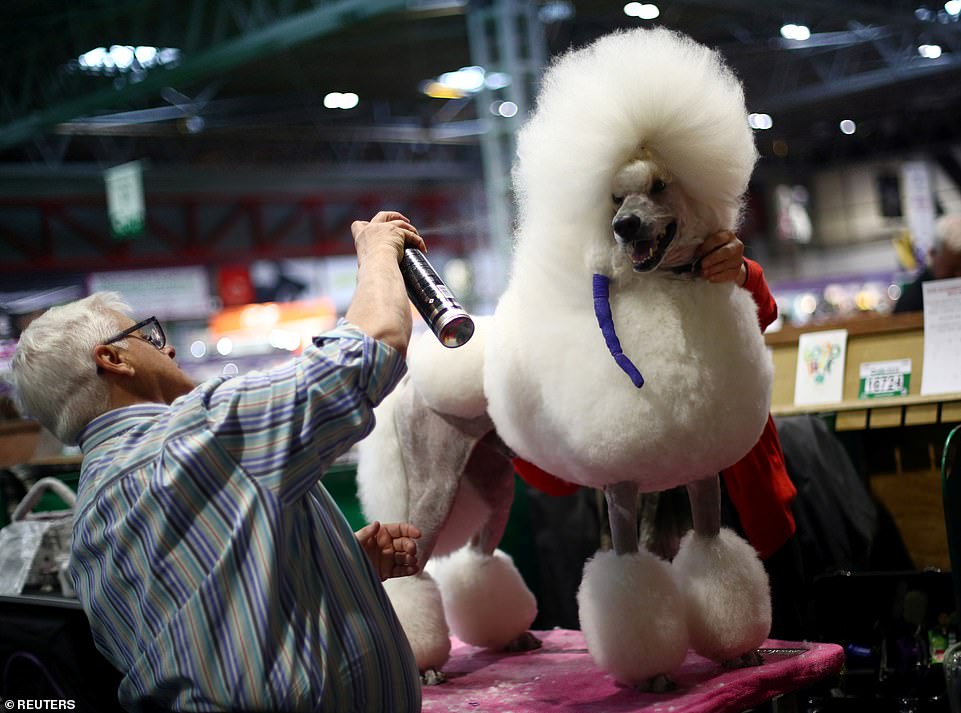 The world-famous event has courted controversy in recent years with protesters calling the competition ‘cruel’, although the UK Kennel Club, who are behind the event, say they’re ‘committed to ensuring that all dogs have the opportunity to lead healthy, happy lives, with responsible owners’.

The pooch-filled pow-wow was established by Charles Cruft in 1891 as a much smaller event held at the Royal Agricultural Hall in Islington, and has grown to become the world’s biggest dog show. 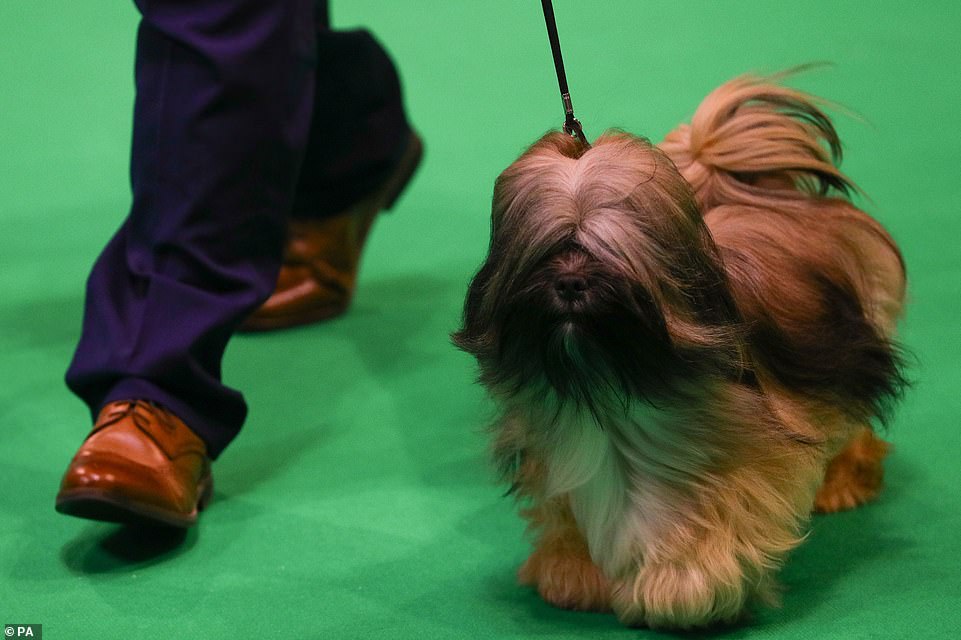 Have no fear, this furry competitor can count on his owner’s expert hand to guide him around the arena 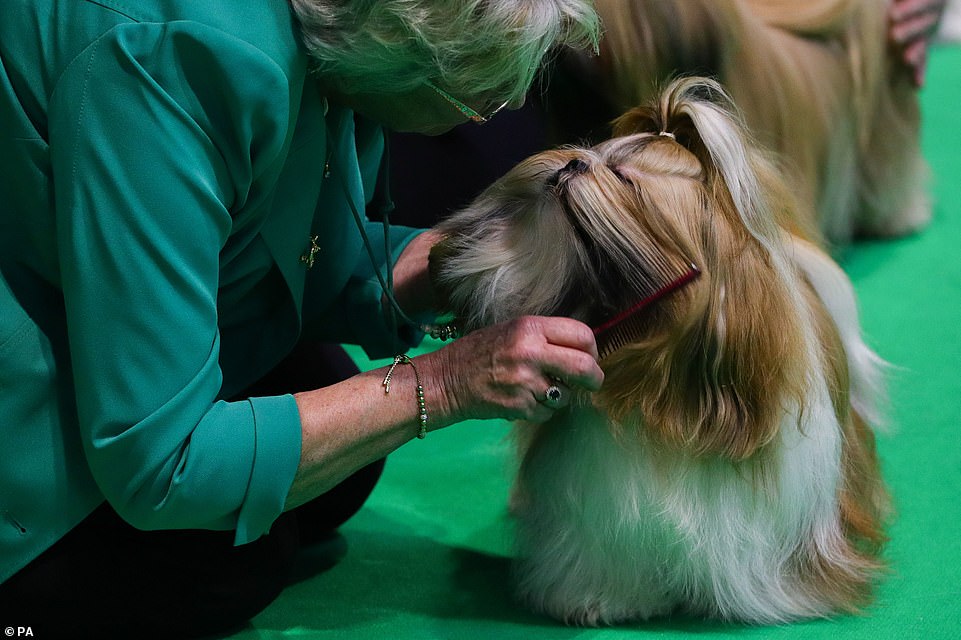 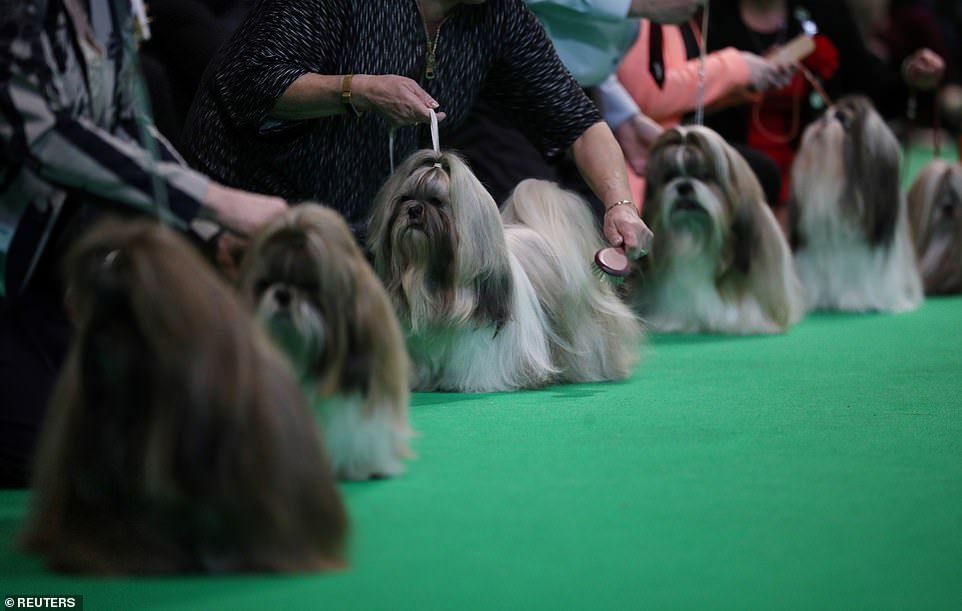 Doggy catwalk: Owners line up their pets for a last-minute grooming session 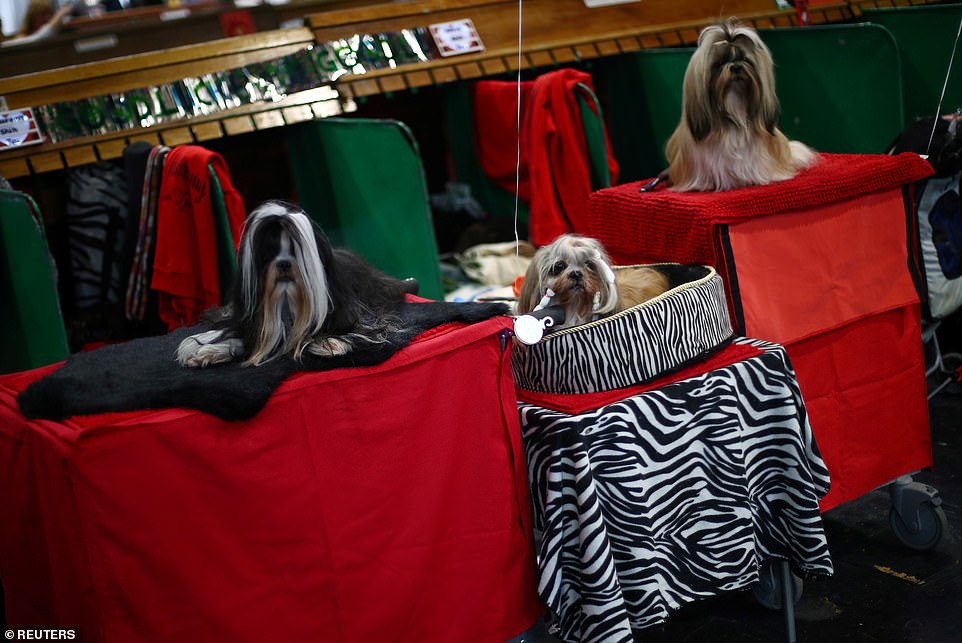 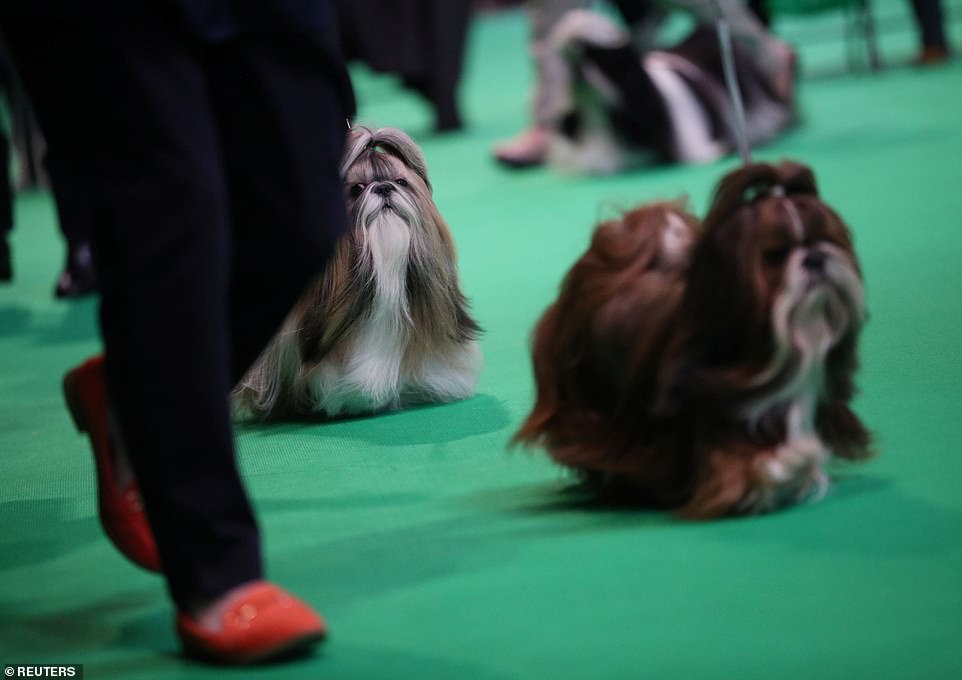 Every year bookmakers see dog fans placing bets on breeds likely to scoop the top prize. Last year’s overall winner was Tease, a whippet from Scotland but Bookies Betway has revealed that this year’s favourite to walk away with the rosette is the gundog category, which last won the category in 2017. Odds are currently at 11/8 with terriers nipping at the heels with odds of 7/4. 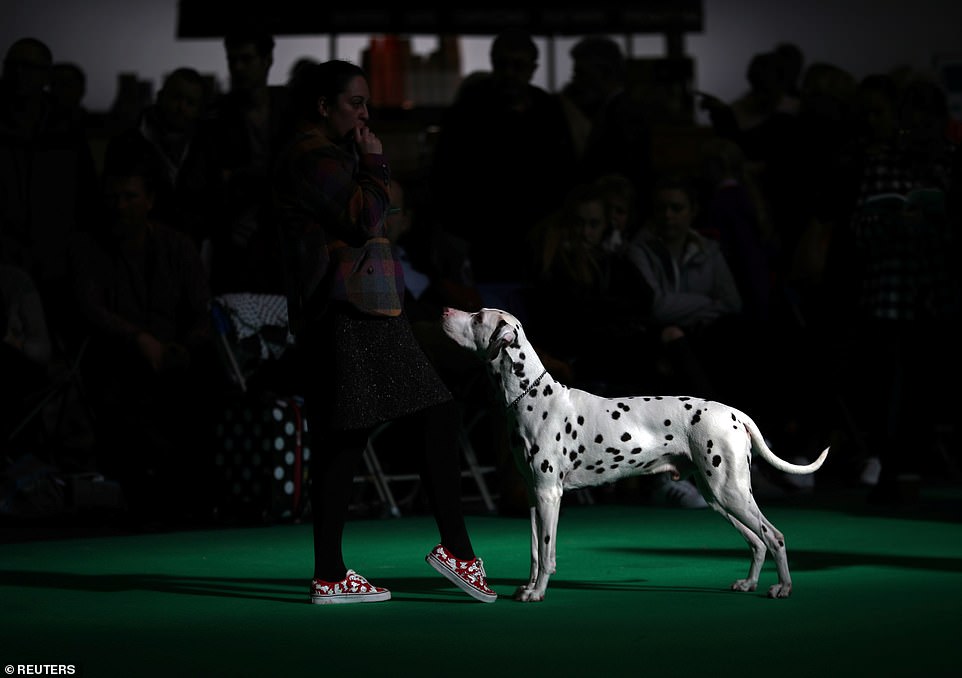 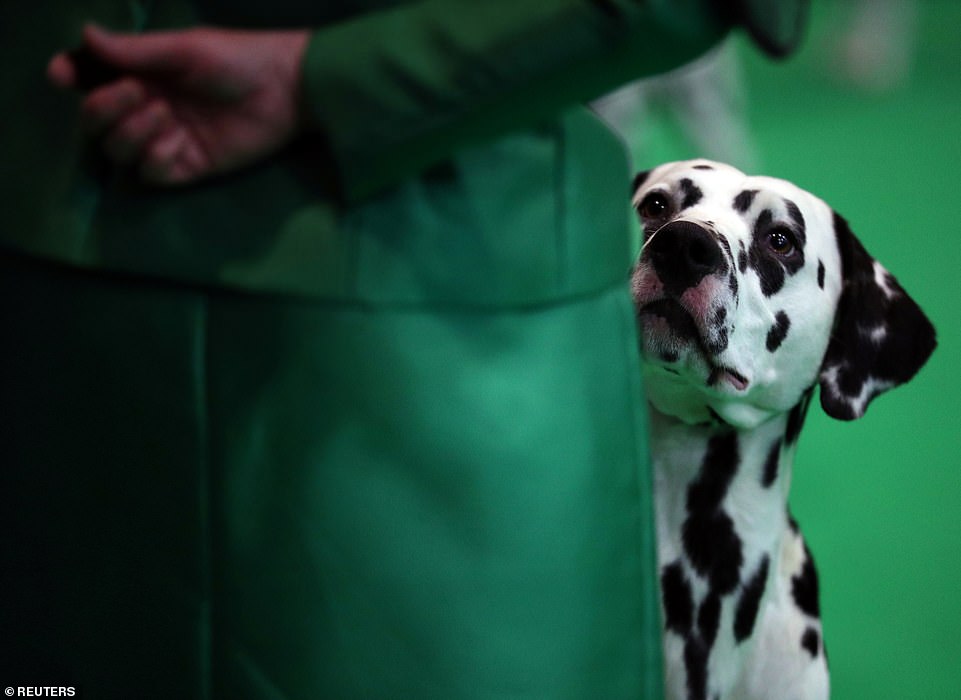 This cutie peers into its judge’s eyes – but will it win them over?

A  judge has been forced to step down after it was revealed he was once involved with scientific experiments on beagles.

Ron James had been selected as one of the elite panel choosing the Best In Show champion at tonight’s finale of the world’s biggest dog show. But two weeks ago, the vet and expert beagle breeder was told to stand aside.

The Kennel Club, which runs Crufts, gave no explanation for his sudden removal.