Good boy! YouTuber trains AI to recognize dogs walking by and shouts compliments at the canine

A YouTuber feeling blue during lockdown decided to give get a rush of serotonin by looking at some cute dogs.

Ryder, host of Ryder Calm Down, connected his computer to an AI-enabled camera module and uploaded a popular object-detection algorithm set to recognize when a dog came into view.

When his camera identifies a pooch, the automated text-to-speech voice shouts, ‘There is a dog outside!’ through a loudspeaker.

The program can also be reversed, so passersby walking their canine get to hear Ryder’s automated voice shout ‘I like your dog!’

He starts his latest video by explaining that ‘looking at dogs and cats will increase the amount of serotonin and dopamine in your brain.’

Called the ‘baby schema’ effect, the same thing happens when we look at human infants. 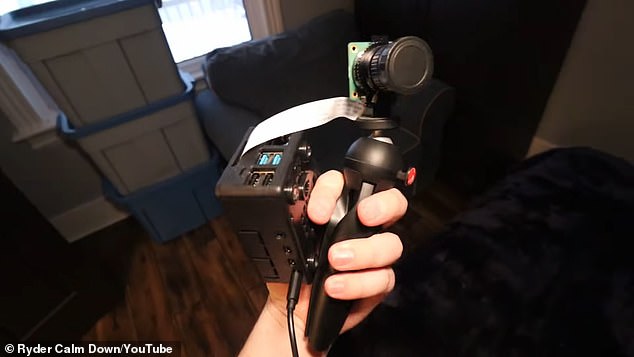 Ryder decided he could do with a boost of dopamine by peeping at some dogs in real life.

Not wanting to spend all day ‘leering’ out the window, he built an AI-powered machine that would automatically recognize when a dog went by with its owner. 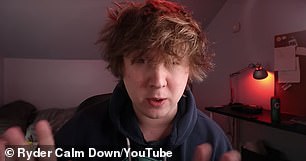 ‘We are building a machine that looks out the window and notifies me if any dogs are walking past so i can go look at them and feel better,’ he explains in a video.

Ryder says the real inspiration for the device was his friend Heather, ‘who once scaled a 6 foot fence to pet a dog.’

Inputting some custom code and attaching a loudspeaker, Ryder pointed the contraption at the street and waited. 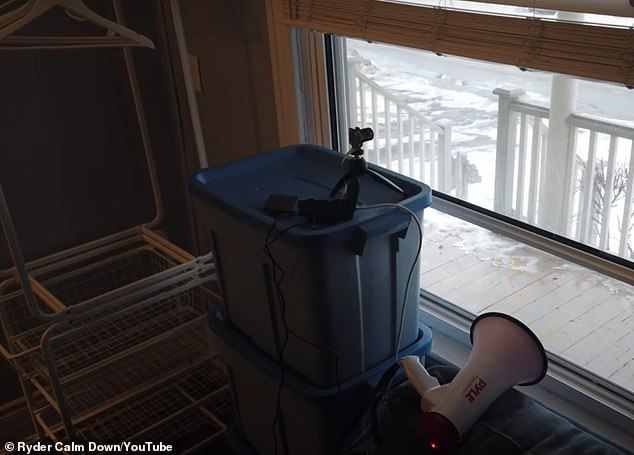 Figuring the dogs and their owners needed a little boost, too, Ryder trained the system to have the loudspeaker yell, ‘I like your dog!’ at passersby in his voice. ‘I turned the megaphone around and opened up the window,’ he said 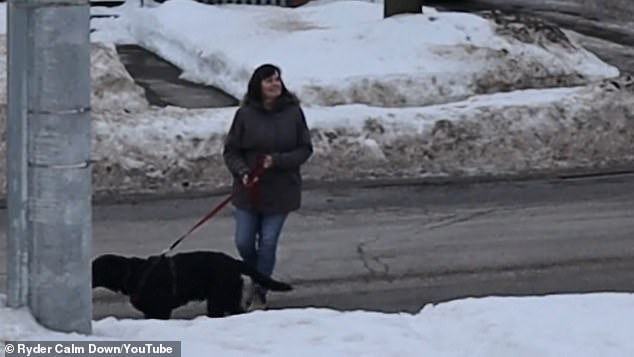 One owner seemed a bit confused by the disembodied compliment from the AI system.  Ryder confirmed he was in a better mood afterward, ‘but I’m not sure if it was the dogs or building something that actually worked for once’

Sure enough the automated text-to-speech voice loudly announced, ‘There is a dog outside!’

Figuring the dogs and their owners needed a little boost, too, Ryder trained the system to yell, ‘I like your dog!’ at passersby, even if he wasn’t home.

‘We can use the same technology to tell people that have a cool-looking dog even though we can’t really tell,’ Ryder said. ‘I turned the megaphone around and opened up the window.’

In the video above, the woman on the receiving end  seems bemused, if confused about the disembodied compliment.

The experiment did make him feel better, Ryder confirmed, ‘but I’m not sure if it was the dogs or building something that actually worked for once.’

He is something of a DIY tech wizard: In other videos Ryder has constructed a robot that pours you wine every time you get a Slack notification, an app that lets strangers control his Christmas lights remotely, an emergency Zoom shutdown button, and a FM radio that only plays his favorite songs.

Dog compliments aren’t even the wildest use for machine learning: Researchers at the University of Helsinki recently trained AI to detect which faces a user finds attractive.

Finnish researchers wanted to find out whether a computer could identify facial features we find attractive without any verbal or written input guiding it.

Thirty volunteers were strapped to an electroencephalography (EEG) monitor, then shown a variety of deepfake faces.

By measuring their EEG reading as each face was presented, the team could determine their unconscious preference.

They then fed that data into an AI which learnt their preferences and created new images tailored to the individual volunteer.