Two childhood pals have taken their friendship to the next level by opting to document their joint vasectomies — or what they like to call bro-sectomies.

For a recent episode of their show, Good Mythical Morning, comedians Rhett McLaughlin and Charles Lincoln ‘Link’ Neal, both 39, shared footage from their vasectomies, starting with them using rock-paper-scissors to see who would go first.

‘We got a bro-sectomy,’ Link says as the start of the clip, explaining they were in the same room when they each got the procedure, one right after the other.

Close as can be: Rhett McLaughlin (L) and Charles Lincoln ‘Link’ Neal (R) documented their joint vasectomies for their show, Good Mythical Morning, calling it a ‘bro-sectomy’ 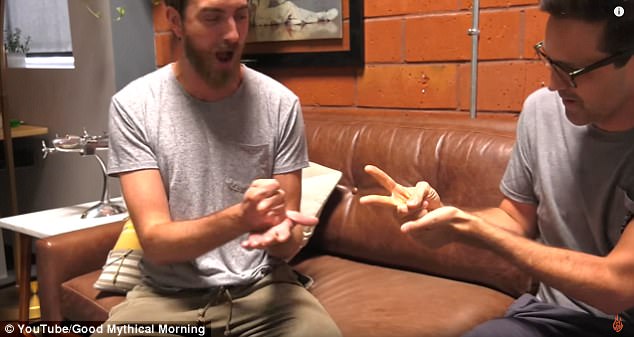 Foolproof method: The 39-year-old comedians played rock-paper-scissors to decide who was going to go first on the day of their procedures

Rhett and his wife, Jessie Lane, have two sons, Locke and Shepherd, while Link and his wife, Christy Neal, are parents to a daughter, Lily, and two sons, Charles IV and Lando.

Although they stress that they love their kids, they aren’t looking to have anymore.

‘We both have a beautiful brood of children, and we love them very much,’ Link notes. ‘But at a certain point, it is time to say enough is enough and get your junk snuffed.’

A vasectomy prevents sperm from mixing with the semen that is ejaculated form the penis, and during the procedure, the vas deferens duct from each testicle is clamped, cut, or sealed. 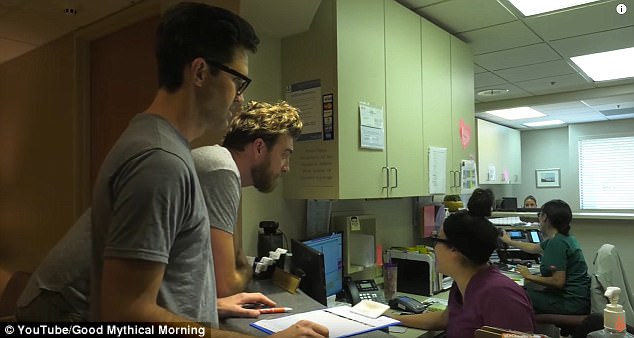 Two for one: ‘We’re here for the bro-sectomy,’ Link tells the nurse when they arrive at urologist Dr. Michael J. Hyman’s office 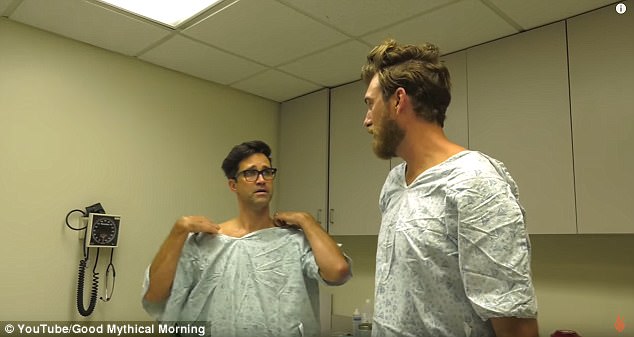 Starting to panic: Rhett wonders if there is still time for him to back out

Or as Rhett puts it, a vasectomy is ‘when the doctor cuts some little tubes in your McDonald’s ball pit as a permanent birth control method’.

On the day of their vasectomies, Rhett explains that whoever goes first has to take a Valium 40 minutes before their appointments.

Unsurprisingly, both of them want to get it over with, so they play a game of rock-paper-scissors to decide who will go first.

After Link loses, he points out that him going second ‘drastically increases the chance’ that he is going to bail on the procedure.

‘Yeah, that’s why I am going first,’ Rhett says. ‘I want to be the infertile one.’ 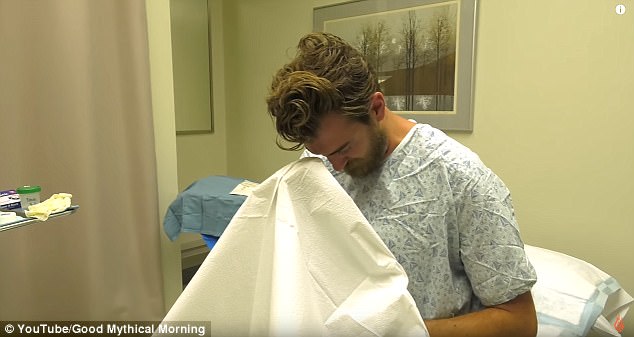 Final words: ‘Hey man, this is the last time you will ever work properly,’ Rhett tells his scrotum 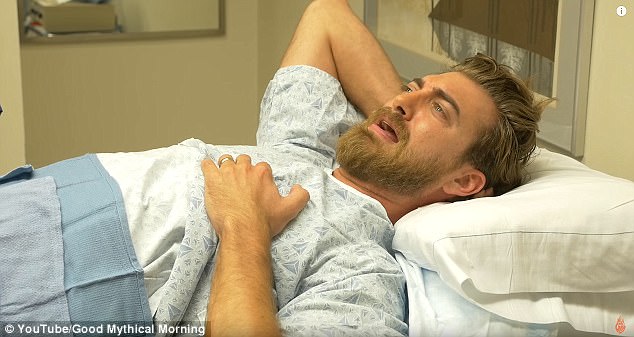 A little discomfort: Rhett admits to feeling a ‘little pressure and some pulling’

When they arrive at urologist Dr. Michael J. Hyman’s office, Link tells the nurse they are ‘here for the bro-sectomy’.

‘Sounds fun,’ she says awkwardly before getting a nurse to take them to their procedure room.

Rhett notices a shot glass filled with liquid on the operating tray and immediately asks if has to drink it.

Rhett finally gets settled on the examining chair, and he takes a minute to have a few last words with his member before the procedure. 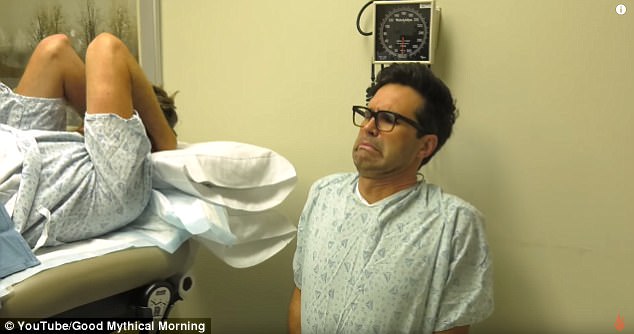 Uncomfortable to watch: Link looks like he is having a harder time than Rhett during his friends vasectomy 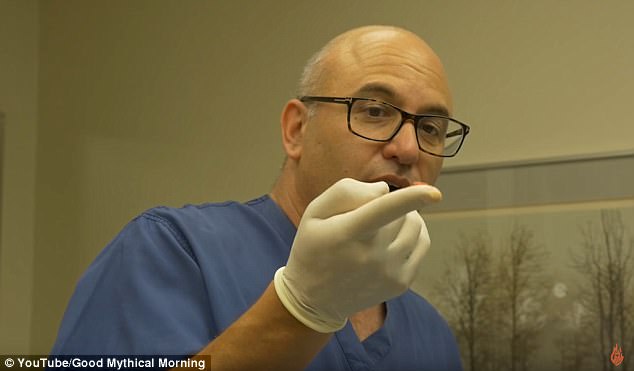 Medical humor: After clipping the vas deferens, Dr. Hyman shows it the camera and notes it looks ‘like a piece of al dente pasta’

‘Hey man, this is the last time you will ever work properly,’ he says. ‘After this, you are going to be like a gun they use on a film set, shooting blanks.’

When the Dr. Hyman arrives in the room, he seems to take great pleasure in demonstrating how to prepare for the procedure.

The doctors holds up a long piece of tape with a cotton ball in the middle for the camera, explaining: ‘This is how to keep Mr. Happy away and happy.’

‘This has become a YouTube tutorial video: How to Perform Your Own Vasectomy,’ the guys joke, prompting Dr. Hyman to warn viewers not to try this at home.

After shaving a quarter of the scrotum, the doctor starts feeling around the area. 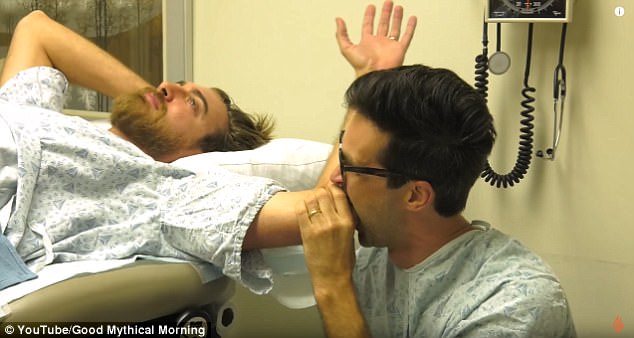 Distraction: At one point, Link bites Rhett’s arm while watching the procedure 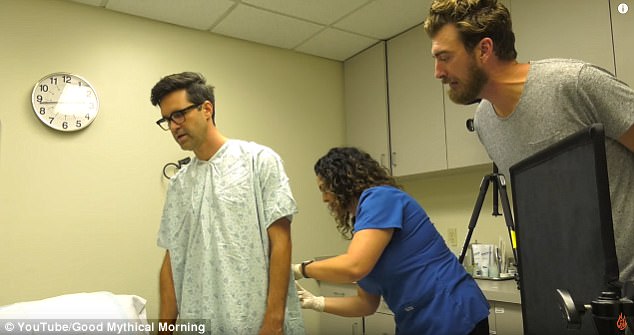 Precaution: Link starts to get light-headed, and the doctor suggests giving him a shot of Demerol before he switches spots with his friend

‘You’ve touched your own balls before. It can’t be any different having him touch them,’ Link says, and Rhett points out that ‘it’s a little different’.

‘I am actually not touching his balls,’ the doctor chimes in. ‘I am touching his scrotum. Let’s get anatomically correct.’

Dr. Hyman warns the patient he is going to feel a ‘little puncture’ when he cuts into the scrotum; however, Rhett ‘can’t tell’ if he feels it.

The doctor goes on to explain to Rhett that after his vasectomy is complete, it won’t make a difference in the quantity of semen. 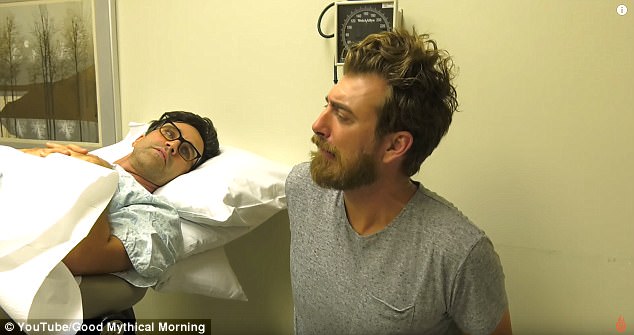 Not liking the view: Although he just had his own vasectomy, Rhett also makes faces while watching the procedure 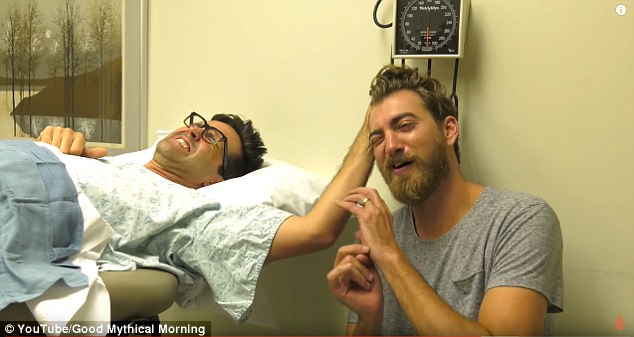 Too hard: Link starts yanking on his friends hair to help him deal with the discomfort

Rhett admits to feeling a ‘little pressure and some pulling’, but before he knows it, Dr. Hyman clips the vas deferens and starts cauterizing it.

The doctor cheerfully tells the guys that the smell of the cauterizing is ‘usually the most memorable’.

He then goes on to show the camera the piece of the vas deferens he clipped, noting that it looks ‘like a piece of al dente pasta’.

Although Rhett is perfectly fine, Link starts to get light-headed, and the doctor suggests giving him a shot of Demerol before he switches spots with his friend. 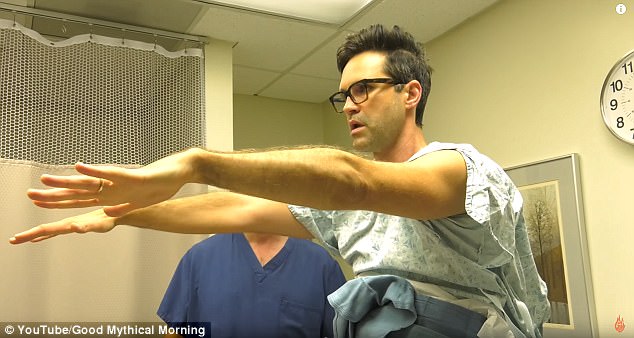 Success: When it is all said and done, Link declares himself an ‘infertile monster’ 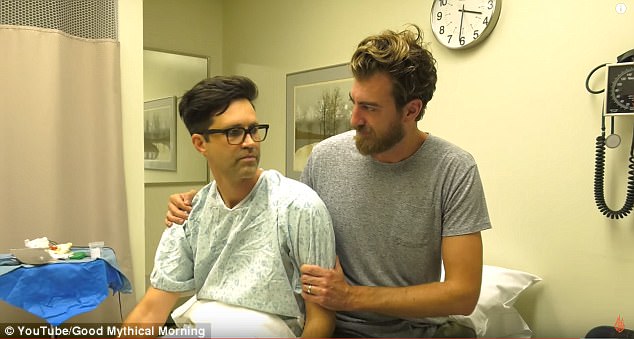 Closer than ever: ‘We did it. We can’t make babies with our wives,’ Link tells Rhett

‘The thing is, you go your whole life instinctively protecting these berries, and now here I am just spreading my legs, putting them on a platter for some guy that I just met once to fondle, poke, prod, and pull snip burn and shove and then pat me on the back,’ Link says before his procedure. ‘It’s just not natural.’

The doctor goes through the entire process all over again, and while Link does yank Rhett’s hair at one point, it was not nearly as bad as the thought it was going to be.

They agree it certainly isn’t pleasant, but it is not nearly as painful as some other things they have endured such as stubbing their toes.

After calling himself an ‘infertile monster’, Link and Rhett celebrate their vasectomies by giving each other a pat on the back.

‘We did it. We can’t make babies with our wives,’ Link says.