A good Samaritan helped save a woman who was preparing to jump to her death in a subway station.

The suicidal young woman had climbed across beams above a train platform in the Broadway-Lafayette subway station in Manhattan’s East Village around 3.30pm Saturday.

A young man followed her about 10 feet across. While some subway riders crowded around to watch, some called the police and others simply walked by.

Witness Michal Klein, 38, from Hoboken, New Jersey, had just gotten off a downtown D train on her way to a restaurant when she saw the two sitting on the beams about 20 feet above the platform.

A good Samaritan helped save a suicidal young woman by following her across beams 20 feet above a train platform in the Broadway-Lafayette subway station in Manhattan around 3.30pm Saturday afternoon. The man comforted her and put his arm around her (pictured)

Klein noticed the young woman looked upset and asked some of the people standing around what had happened.

‘I couldn’t really tell if they were laughing or if one person was crying,’ Klein told CBS New York.

‘I wasn’t sure. My first thought was: How did they get up there? I thought they were just goofing off.’

In a caption to a picture she took and posted online, Klein wrote: ‘I found out one young girl climbed over railing saying suicidal things.

‘A random young guy went after her to calm her down. Others called for help and apparently no one cared.

‘People were on phones making 2nd (sic) attempts and finally cops showed up, but just cleared area (sic) and stood there.’ 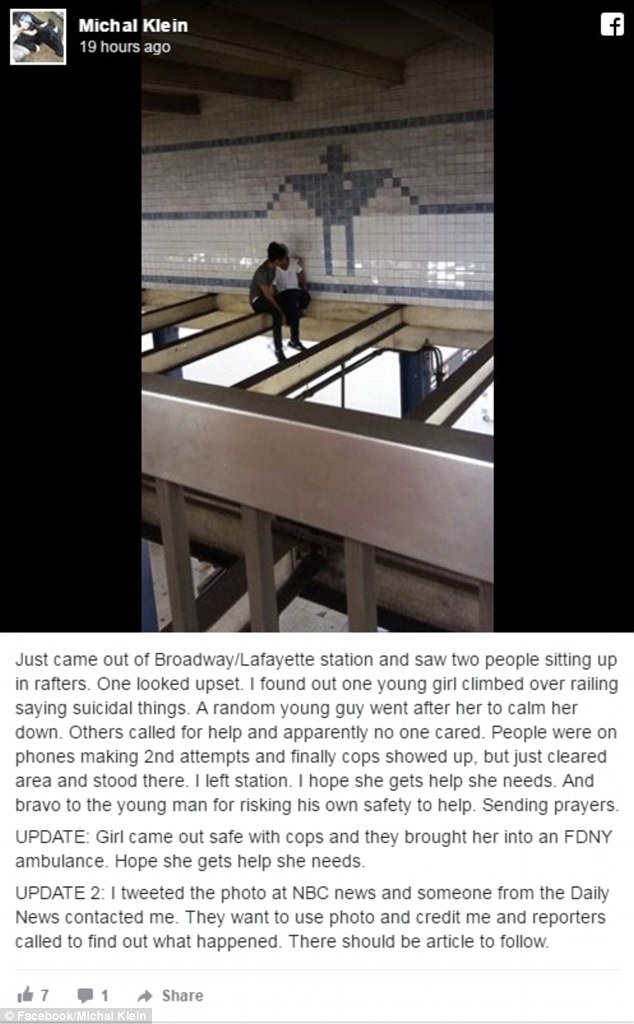 Witness Michal Klein, 38, from Hoboken, New Jersey, had just gotten off a downtown D train on her way to a restaurant when she saw the two sitting on the beams. Klein took a picture of them and posted it online

At about 4.20pm, police escorted the young woman from the subway station and brought her into an ambulance, New York Daily News reported.

‘I don’t know what I would’ve done. I don’t think I would’ve climbed over to do that,’ Klein told CBS New York.

‘He actually cared enough, whoever he was, to help her. A lot of people seemed to be like “Oh, it’s New York”, and kept walking.’

In her Facebook post, Klein added: ‘I hope she gets help she needs. And bravo to the young man for risking his own safety to help. Sending prayers.’

If you or anyone you know needs support, contact the Suicide Prevention Lifeline at 1-800-273-TALK or https://suicidepreventionlifeline.org/