Dramatic moment cops arrest man, 69, in his living room after he sent explicit images to a police officer posing as a teenage boy

A 69-year-old man who allegedly sending indecent images to a police officer pretending to be a teenage boy has been sprung in his living room.

The man was arrested at a Goodna home in Brisbane’s southwest in Queensland after a dramatic police raid on Thursday and slapped with child sex offences.

Police bodycam footage shows the man sitting on a black couch with a film projector and speakers behind him as officers explain the charges.

Police alleged the man engaged with what he had thought was a teenage boy, but turned out to be an undercover cop investigating online child exploitation.

The man allegedly posted indecent images to the child’s profile and tried to set up a time to meet to engage in sexual acts.

Footage of the man (pictured) being confronted by officers in the home showed him sitting on a couch in a media room, with a film projector and speakers in the background as police interviewed him

Vision of the dramatic arrest showed the man sitting on the couch in a black T-shirt and black shorts, with a projector, a set of speakers and a desktop behind him.

The 69-year-old was also filmed as he talked to officers from inside a vehicle.

The man was released on strict bail conditions and will appear at the Ipswich Magistrates Court on 18 January 2023.

The arrest comes as Queensland police ramp up their ongoing campaign against child online exploitation across the state. 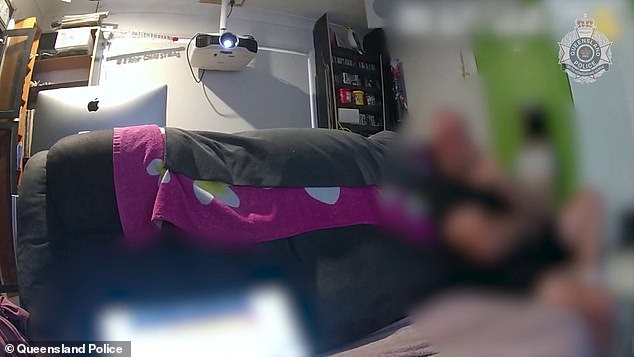 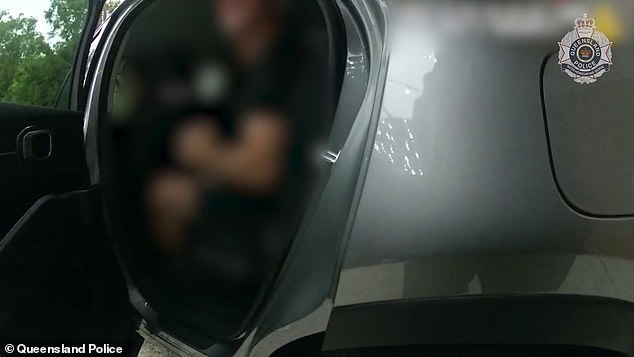 Detective Inspector Glen Donaldson of Argos said despite warnings about online safety of children, kids are still engaging with strangers online – including sending intimate images of themselves.

‘Research by the Commonwealth eSafety Commissioner has identified that one in four children have been approached by a stranger online,’ Detective Inspector Donaldson said.

‘This is extremely concerning and highlights the need for parents to be aware of their child’s online footprint and to speak with their child about online safety.

‘Every day Argos has undercover officers working across a range of online platforms to detect and apprehend people who seek to exploit children in our community.

‘Supervision is the key to prevention, as is ongoing communication with children about how to stay safe online and the dangers of having online “friends” they have never met face-to-face.’

The task force Argos is a branch of the Queensland Police Service that investigates online child exploitation and abuse.