A review page for Great Britain has been unearthed online – and it features some dismal feedback from underwhelmed tourists.

A Reddit user who stumbled across the online review page – of the sort more typically used by customers to comment on hotels or restaurants – on the Google Maps page for Great Britain shared it on the forum.

And while the country has a respectable average rating of 4.2 stars, visitors have also complained about everything from its rainy climate to its roundabouts.

One apparently disappointed tourist posted on the page to suggest it should be renamed ‘just alright Britain’.

Google Maps has a review page for Great Britain, which includes many bizarre one star reviews

A Reddit user posting under the handle Flashmanual shared the page, pointing out that it had been flooded with negative reviews from visitors.

They wrote: ‘Today I discovered that ‘Great Britain’ has a review page on Google Maps. Seems it isn’t to everyone’s taste.’

One review was from a particularly disgruntled Italian tourist, who vented about several aspects of British life.

They wrote: ‘They do not understand Italian, they do not have a bidet, they are dirty, they fill the streets with roundabouts and then they do not know how to do them and they form long lines of cars without motive.

Josh Hamilton didn’t agree with the name, and suggested it be called ‘Just Alright Britain’

‘They put the pineapple on pizza, they use flip-flops as winter shoes, they walk in the rain with the hood of the giaccavento (hoodie) lowered without notice, use the garages as dumps, park in the most improper places, eat everything as long as it is fried, take a bath 12 months a year everywhere.’

And it wasn’t just Italians who were unimpressed by Britain, others agreed it couldn’t compare to others part of the world.

‘United Kingdom is smaller than the greatest country in the world India,’ another posted.

This person seemed guilty about only leaving a one star review, writing: ‘God bless you so much’ 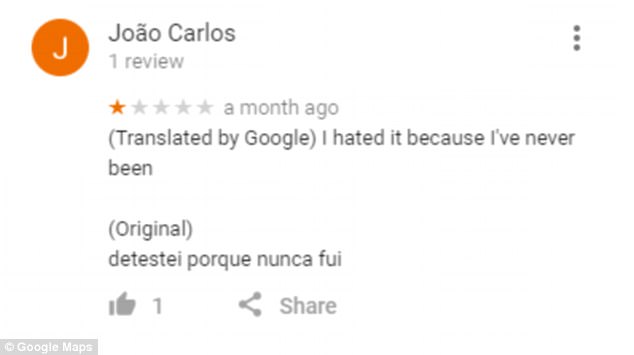 Other comments were rather short, and in some cases, cryptic.

Another said: ‘hated it because I’ve never been.’

‘Bit rainy,’ a third wrote, in a short and not so sweet review. 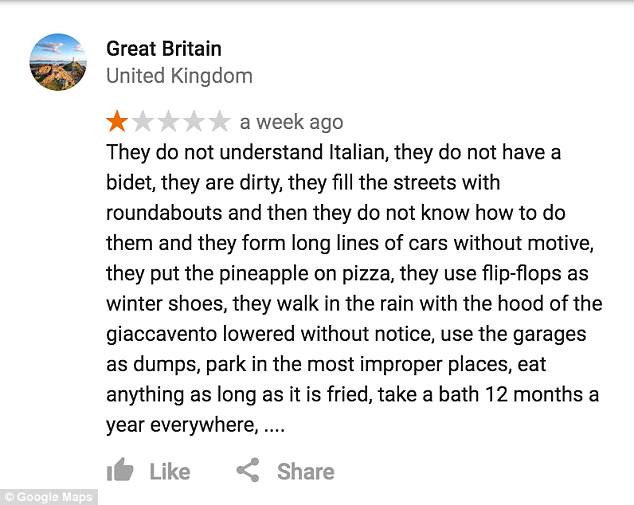 An Italian reviewer had a long list of things they hated about the country, including fried food and roundabouts