‘Google Maps nearly killed me’: How a man ended up swept out to sea after taking a shortcut on his way home – and his incredible rescue story

What was supposed to be a shortcut back home turned into a three-hour ordeal when Remopita Pongi used a Google Maps route that swept him out to sea.

The 29-year-old New Zealand man had been trying to find his way home after he was left stranded in Opotiki, in the North Island’s Bay of Plenty on Saturday.

Hoping to shorten his 80km journey, he resorted to the navigation app which suggested he could cut his trip by 25km by swimming across the tidal estuary onto the bay.

However, once he got in the water he became caught in riptide that immediately pulled him 2.5km into the sea, the New Zealand Herald reported.

Remopita Pongi, 29, was swept out to sea after taking a Google Maps shortcut on Saturday

Pongi, luckily, came across a piece of driftwood that he clung on to for the next three hours.

He continued to drift away as it became darker and the temperature dropped and he began to feel the early effects of hypothermia.

Pongi finally reached for iPhone which he was surprised to find was still working after being submerged in water.

‘I thought f*** that, I’ve got to get a little bit of help here, any longer in the water and I would have started seizing up,’ he said.

He quickly called police who alerted the Whakatane Surf Lifesaving Club of his location.

While waiting for help to arrive, a man on a jetski spotted his head bobbing up and down and went over to rescue him. 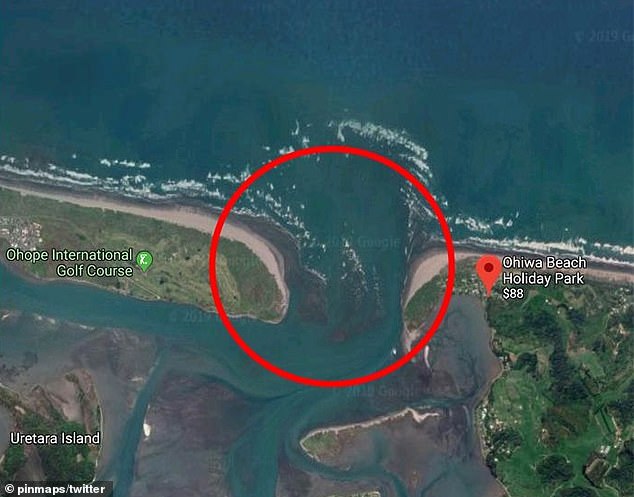 The navigation app which suggested he could cut his 25km off his 80km journey by swimming across the tidal estuary onto the bay, but he got swept out to sea instead

Whakatane Surf Lifesaving Club captain Craig Julian told Yahoo News Pongi would have been a ‘dead man’ and likely would not have survived much longer.

‘He’d been in there for three hours which is quite remarkable,’ he said.

‘Most of us probably would’ve panicked to death.’

Pongi revealed he had been forced to spend the night at the beach, feeding on fish and keeping warm with a fire he built himself after he got into an argument with his brother and was left stranded.

Pongi was taken to Whakatane Hospital where he was treated for hypothermia.