Google has rolled out a worldwide update of its popular maps app to give terrain a ‘more vibrant’, detailed and colourful appearance.

The visual makeover adds greater detail and makes natural features easier to see, such as beaches, deserts, lakes or snow caps on the peaks of mountaintops.

The updates gives Google ‘one of the most comprehensive views of natural features on any major map app’, the tech giant has said.

The redesign will be available across all 220 countries and territories that Google Maps supports, starting this week.

Google is rolling out visual improvements that bring even more detail and granularity to the map. This before and after of Croatia in Maps shows more landscape detail. Users can clearly make out the beaches and greenery that line Croiatia’s coast and nearby islands like Hvar

‘We’re rolling out new visual improvements that bring even more detail and granularity to the map, making it easier to understand what an area looks like whether you’re exploring virtually or planning a visit,’ said Google Maps product manager Sujoy Banerjee in a blog post.

‘With a new colour-mapping algorithmic technique, we’re able to take this imagery and translate it into an even more comprehensive, vibrant map of an area at global scale.

‘Exploring a place gives you a look at its natural features – so you can easily distinguish tan, arid beaches and deserts from blue lakes, rivers, oceans and ravines. 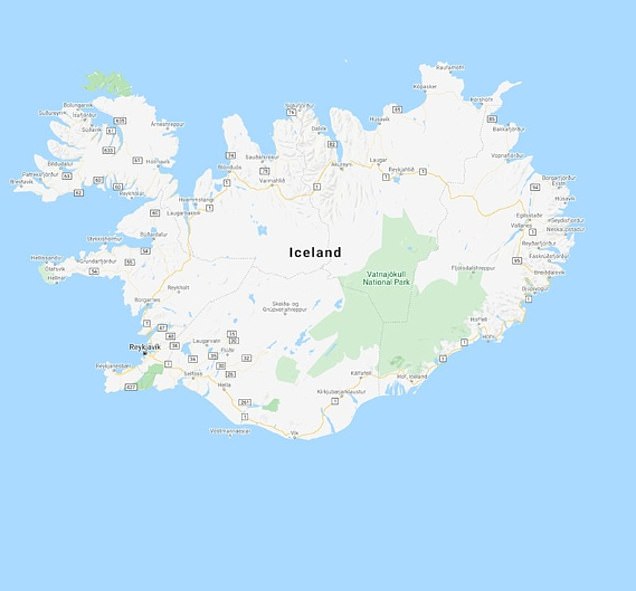 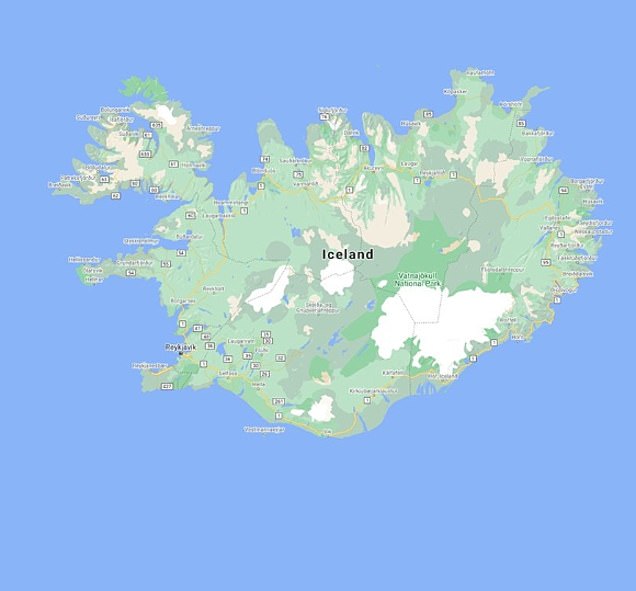 Iceland’s mountains and glaciers are better represented by the new update, which is due to roll out this week

‘You can know at a glance how lush and green a place is with vegetation, and even see if there are snow caps on the peaks of mountaintops.

Google has used a new colour-mapping algorithmic technique to make the service, which launched 15 years ago, visually richer.

In Iceland for example, Vatnajökull, the largest ice cap in the country, is now shown in white, while rocky areas are of the country in the north are in light brown.

The caps, mountainous ridges and surrounding vegetation of Mount Rainer National Park in the US, meanwhile, are also more clearly visible.

Before and after shows extra detail added to Morocco on the west coast of Africa, including dense vegetation in the north

With this update, Google Maps has ‘one of the most comprehensive views of natural features on any major map app’

Previously, the colour coding on Maps was largely limited to green and brown, with lightly shaded areas to denote urban centres.

It’s then analysed these features and assigned them a range of colours on the HSV (hue, saturation, value) colour model.

HSV was developed in the 1970s as an update to the more primitive primary coloured RGB (red, blue, green) colour model.

This means a densely covered forest can be portrayed as dark green, while making an area of patchy shrubs a lighter shade of the colour.

Mount Rainer National Park in the US. The update aims to make it easier for users to understand what an area looks like when planning a visit

Sedona, Arizona in the US. The new update (right) reelects its desert landscape and more clearly displays where Red Rock State Park is

With this update, Google hopes to give users a clearer idea of what to expect from the terrain before they embark on a journey and ‘get a feel for an area’.

Google also revealed that a more detailed street view is also in the pipeline, which will start with London, New York, and San Francisco in the coming months, with plans to expand to more cities over time.

This update will show the accurate shape and width of a road to scale, Google said, allowing people to see exactly where features like pavements, crossings and pedestrian islands are located.

This is crucial information for Maps users who have accessibility needs, like wheelchair or stroller requirements, it said.

These details will also be particularly helpful during the coronavirus pandemic, as more people are opting to walk or take other forms of solo transportation.

Google Maps, which launched in 2005, is used by more than 1 billion people every month, the company said. 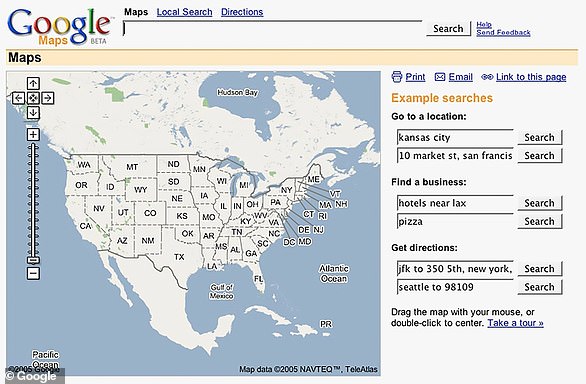 A shot of Google Maps as it looked when it launched 15 years ago. Google says the service has since ‘redefined what it means to be a map’

– On February 8, 2005, Google Maps was first launched for desktop as a new solution to help people ‘get from point A to point B’.

– In December 2005, Portland, Oregon became the first city to use Transit Trip Planner, helping commuters see public transit schedules and routes. It started as a standalone product but was eventually folded into Google Maps. 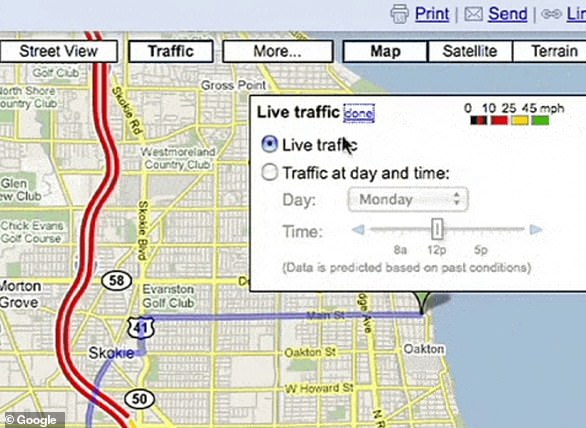 – About two years after launching Google Maps, the company introduced real-time info on traffic conditions for more than 30 US cities.

– On May 29, 2007, Google Street View debuted. Many of us will remember the seeing a Google car driving past capturing footage of the streets.

– In November 2007 Maps went mobile. Google released version 2.0 of Google Maps for mobile, available for Blackberry, Palm devices and others. In 2008, its first Android app launched, followed by the iOS app in 2012. 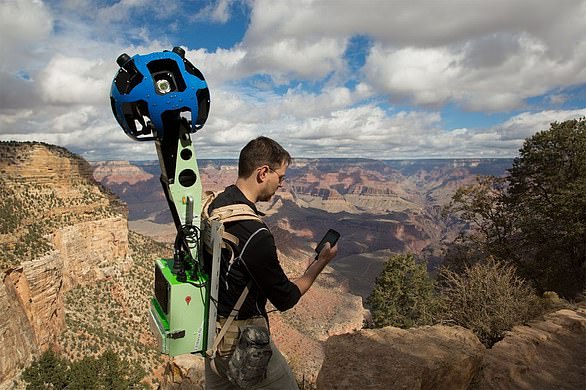 – In February 2019 came Live View, which uses augmented reality to help users understand which way to walk, with arrows and directions clearly overlaid. 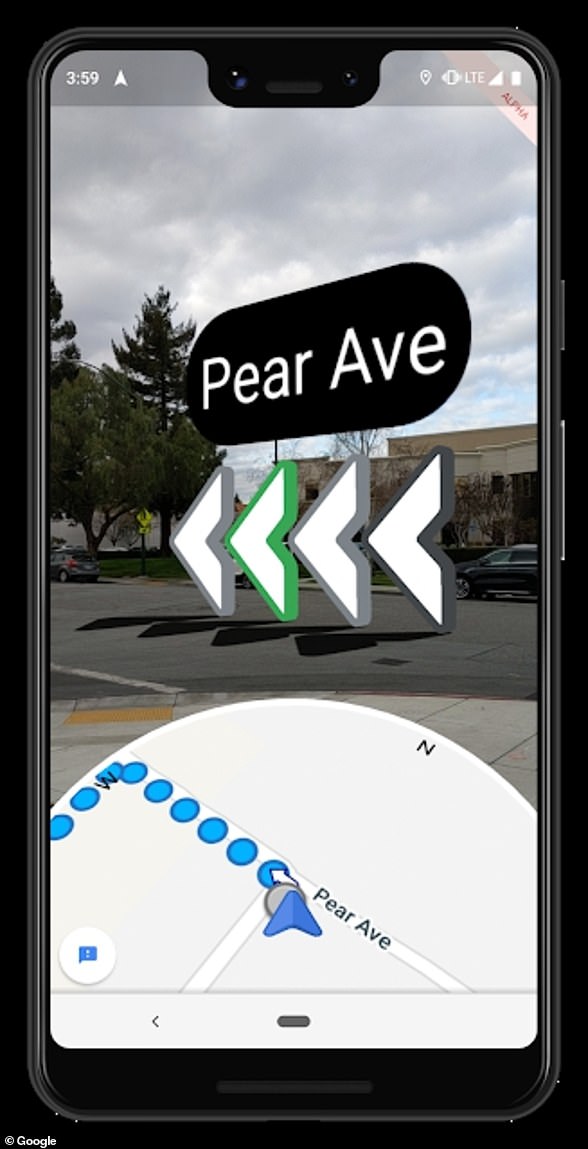 Augmented reality in Google Maps helps users get to their destination

You may have seen the youtube ads for Chad Kimball’s Google Maps Business Model (A.K.A. TheArborAcademy ). If you have any interest in starting your own business, you’ll probably see them at one point or another. Read this Chad Kimball Google Maps course review for more information.