Google might have to start charging for Android operating system

Google CEO Sundar Pichai has warned the company may be forced to start charging for its Android mobile operating system in the future.

The warning comes in the wake of a $5 billion (£3.8bn / €4.3bn) fine levelled by the EU, which charged Google with freezing out rival technology firms from its smartphone software, particularly in advertising.

Android is the most popular mobile operating system on the planet, with more than 2 billion monthly active devices worldwide.

Google currently provides its Android software to smartphone manufacturers for free, saving them the cost of developing their own operating systems.

This has dramatically slowed the once meteoric rise of the market’s main player, Apple’s iPhone, and led to a more diverse smartphone marketplace.

In return, Google is able to serve targeted advertisements to Android smartphone users, and make money from digital purchases made in the Play Store.

Should Google start to charge for the operating system, it could lead to increased costs for phone makers, which will likely be passed on to consumers.

Android fans may be in for a shock after Google’s CEO suggested that the open source platform may have to be paid for in the future. The move comes in the wake of a $5 billion (£3.8bn / €4.3bn) EU fine to Google for freezing out rival firms from its smartphone software

Writing on the company’s blog, Google CEO Sundar Pichai said: ‘So far, the Android business model has meant that we haven’t had to charge phone makers for our technology, or depend on a tightly controlled distribution model.

‘But we are concerned that (the EU’s) decision will upset the careful balance that we have struck with Android, and that it sends a troubling signal in favor of proprietary systems over open platforms.

‘(This) decision rejects the business model that supports Android, which has created more choice for everyone, not less. We intend to appeal.’

When levelling its record-breaking $5 billion (£3.8bn / €4.3bn) fine, the EU had no instruction as to how exactly Google should solve its app bundling violations.

However, if smartphone manufacturers are able to preinstall their own web browsers instead of Google Chrome on new Android handsets, it’s likely to have serious implications for the US search company.

As it stands, mobile advertising revenue accounts for more half (67 per cent) of Google’s net digital ad revenue, which is likely to take a hit if the company’s software is not the default on popular Android smartphones. 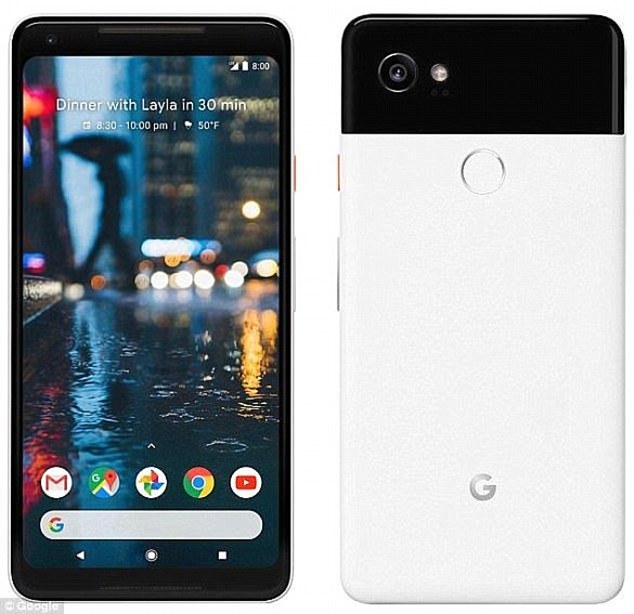 Android’s appeal is that a vast array of smartphone manufacturers, including Google (Pixel 2 pictured), are free to run the operating system on their handsets, saving them the cost of developing their own

The EU conducted a three-year investigation into Google, which found the Mountain View-based company was using its Android operating system to marginalise rivals.

The crux of the issue is the monopoly Google has garnered within the Android app marketplace and the advertising advantage this provides the company.

Google is able to run advertisements inside applications pre-installed with the Android mobile operating system — something rivals are not permitted to do.

Mr Pichai suggests that the average Android user installs around 50 apps themselves and are able to easily remove preinstalled apps.

If Google is prevented from bundling its own apps with Android handsets, however, he warns that this will disrupt the balance that allows the firm to offer the operating system software to competitors for free. 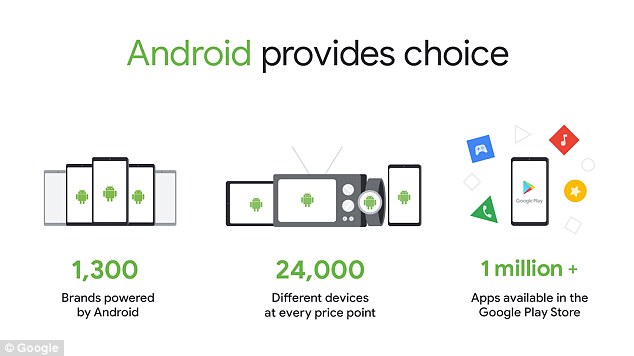 CEO Sundar Pichai has argued that ‘a healthy, thriving Android ecosystem is in everyone’s interest’ and points to the wide array of brands, devices and apps that have been developed for the open-source platform

Mr Pichai argued: ‘Today, because of Android, a typical phone comes preloaded with as many as 40 apps from multiple developers, not just the company you bought the phone from.

‘If you prefer other apps — or browsers, or search engines — to the preloaded ones, you can easily disable or delete them, and choose other apps instead.

‘This is in stark contrast to how things used to be in the 1990s and early 2000s—the dial-up age. The free distribution of the Android platform, and of Google’s suite of applications, is not only efficient for phone makers and operators — it’s of huge benefit for developers and consumers.

‘If phone makers and mobile network operators couldn’t include our apps on their wide range of devices, it would upset the balance of the Android ecosystem.’