Online shopping addicts rejoice. Google Pay is rolling out on iPhone and desktop.

The tool combines previous Google services, such as Android Pay and Google Wallet, all aimed at speeding up the checkout process.

Once a card is added to a browser, users can start using it immediately across devices and there’s no need to configure the service for each online store.

Google Pay will soon be rolling out on iPhone and desktop (pictured) making buying things even easier. The feature lets users check out faster on online stores and also send and receive money using credit and debit cards as well as PayPal

This information can be used to make payments online or at locations that accept the form of payment.

Following its launch on Android in February, the service is now available on Chrome, Safari, and Firefox as well as iPhone, iPad and Mac devices.

Android users can now use the feature to purchase items on the high-streets using contact payments, however this does not appear to be available for iOS yet.

The new feature is rolling out in all of the 20 countries where Google Pay is currently available, including the US and UK.

It could give the company more of a chance to compete with Apple Pay which already works on desktop and mobile.

‘Once you’ve added a card to Google Pay, you won’t need to enter your payment info again—even when you’re checking out in an app or on a site for the first time’, Google product manager Gerardo Capiel wrote in a blog post. 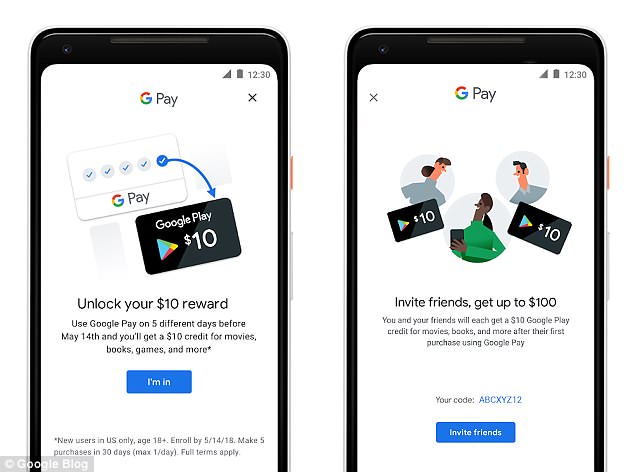 Google Pay stores financial information in the form of virtual credit, debut, gift and reward cards. They can be used to make payments online or at locations that accept the form of payment

Following its launch on Android in February, the service is now available on Chrome, Safari, and Firefox. It could give the company more of a chance to compete with Apple Pay which already works on desktop and mobile

HOW CAN YOU USE GOOGLE PAY?

For payments in store:

After setting up Google Pay, you can use it to make payments at stores, online and on certain apps. Here’s how to do it when you are shopping in a store:

1. If you are a store, look for a ‘GPay’ sign or an NFC (Near-Field Communication) terminal.

2. Unlock your phone and hold it up to the NFC terminal as you would with any contactless payment.

3. Google Pay should launch automatically and if it doesn’t, try holding the phone closer and changing the direction.

4. Once the NFC terminal registers your device, follow the instructions to enter your PIN number.

5. The transaction will then be confirmed.

For payments online or in an app:

When using Google Pay to purchase something online or in an app, you should also look for a ‘Buy with GPay’ sign.

2. Set up a payment method if it has not been done before.

3. The transaction will then be confirmed.

‘And if you’re checking out on Chrome, Google Pay can automatically fill in your billing, shipping, and payment info, so you don’t have to bother with forms’, he said.

‘Speed through checkout in convenience stores, grocery stores, or the millions of places that accept contactless payments with the device that’s already in your hand’, he said.

Mr Capiel said that if users lose their credit card and order a new one it will automatically update with Google Pay.

‘The same is true if your bank issues a new card for one that’s about to expire.

‘If your card is already in Google Pay, your expiration date will update as soon as it’s issued—so you can keep on paying without missing a beat’, Mr Capiel wrote.