Google is refusing to halt the sale of ‘sickening’ T-shirts glorifying the IRA because it says that it does not accept it is a terrorist organisation.

A Mail on Sunday investigation can reveal that the technology giant profits from the trade on its shopping website, which also features clothes bearing the insignia of Lebanese militants Hezbollah.

But while Google removed the Hezbollah merchandise last night after being alerted by this newspaper, it said the IRA shirts would remain because the organisation does not appear on a US list of proscribed groups.

The IRA is included on the British Government’s banned list and last night, in a declaration causing disbelief and fury, Google insisted that it was not for the company to determine who is a terrorist organisation.

During 30 years of conflict, the IRA murdered around 1,800 civilians and members of the security services and injured thousands more.

Victims’ families said Google’s bizarre insensitivity over the issue was an insult to the memory of those killed.

Colin Parry, whose 12-year-old son was fatally injured when two IRA bombs exploded in Warrington in 1993, said: ‘I think the likes of Google seem to be above the reach of many governments.

‘As long as there’s a commercial advantage for them, a pound to be made, they will pretty well do anything to sell things.

Despite Theresa May this week warning YouTube and Facebook to take down terrorist propaganda within two hours, there are still dozens of extremist videos on the sites.

The Mail on Sunday was able to find a video on Facebook of an Islamic State firing squad shooting dead Syrians. It had more than a million views and had been online since March.

A YouTube video of dead Isis fighters extolled the ‘virtues’ of becoming a martyr in the name of Allah. The clip has been viewed nearly 3,000 times since it was uploaded in 2012.

Another YouTube video shows a member of Isis throwing someone off a building for being gay.

The video has been viewed 25,000 times since it was uploaded in 2015. The Mail on Sunday also found videos praising Hitler and attacking Jews and homosexuals.

‘It is tasteless and it is offensive to victims of the IRA. Probably because they’re essentially an American company, they don’t have much in the way of sympathy for victims who’ve suffered at the hands of the IRA.

‘Whoever makes these decisions at Google is either unaware of or doesn’t care about the fact that the IRA were responsible for killing thousands of people.’

The row comes just days after Prime Minister Theresa May warned Google and Facebook they face punishing fines unless they remove terrorist propaganda within a two-hour limit. Backed by other world leaders, she told a summit in New York that patience is running out over their failure to clamp down on jihadi groups.

In return for providing online retailers with a shop window for prospective buyers, the company receives an undisclosed fee.

Despite Google’s intransigence, some retailers contacted by The MoS decided themselves to remove IRA garments, though many were still available last night.

As well as profiting from IRA and Hezbollah merchandise, Google has also profited from the sale of T-shirts, iPhone cases and stickers bearing the logo of the Tamil Tigers, a terror group which fought a bloody insurgency campaign in Sri Lanka for 25 years.

Google promised to take action over the Tamil merchandise because that group is on the US list and last night it was removed.

Since the Provisional IRA announced a ceasefire in 1997, the dissident republican groups the Real IRA and the Continuity IRA have remained active in Northern Ireland. These groups do appear on the US Government’s terror list.

Only eBay showed decency by removing t-shirt after pressure

While Google was happy to keep profiting from the sale of IRA T-shirts, eBay took down similar garments that it was advertising after being alerted by The Mail on Sunday.

The online auction site was selling several different IRA T-shirts with provocative republican imagery emblazoned on them, including one £9.58 T-shirt displaying a picture of a skull with two rifles crossed behind it with the words: ‘IRA. Est 1913. Irish Republican Army.’

The website receives a commission of up to ten per cent on items sold, as well as charging a listing fee in some cases. After being alerted by the MoS, it said it would remove the garments. 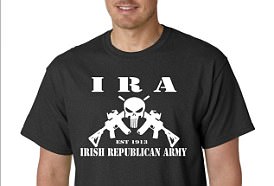 The Mail on Sunday found several IRA T-shirts, including one for £16.50 carrying a picture of the Irish flag overlaid with a gun and the words Irish Republican Army.

Another selling on Google for £14.50 depicts a group of masked IRA gunmen walking through Belfast carrying rifles.

Online auction site eBay also profits from the sale of an array of T-shirts bearing IRA and Hezbollah insignia. The website receives a commission of up to ten per cent on items sold, as well as charging a listing fee in some cases. After being alerted by the MoS, it said it would remove the garments.

Under UK terror legislation, it is an offence for an individual to wear clothing ‘as to arouse reasonable suspicion that he is a member or supporter of a proscribed organisation’. Google’s own guidelines warn about ‘offensive or inappropriate content’. It says: ‘Google values diversity and respect for others, and we strive to avoid offending users, so we don’t allow ads… that display shocking content or promote hatred, intolerance, discrimination or violence’.

Victor Barker, whose 12-year-old son James was one of 29 killed in the the Real IRA Omagh bombing in 1998, described Google’s actions as ‘capitalism at its sickest’.

He said: ‘The Irish republican army is a terrorist organisation. Google should take the T-shirts down. It’s an insult to the thousands of people who were killed as a result of their terrorist activity. It’s just awful.’

Mark Tipper, whose 19-year-old Trooper brother Simon was murdered in the Hyde Park IRA bombing in 1982, said: ‘The IRA has killed British soldiers, they’ve killed their own and they’ve also mercilessly killed civilians and they have never cared. If that’s what Google in America advocate, there is something drastically wrong. It’s called greed; profiting from other people’s sorrow and loss. Nothing else.’

How the search engine profits

The shopping section of Google’s site advertises the sale of t-shirts emblazoned with IRA insignia and slogans.

In return for providing online retailers with a shop window for buyers, the company receives an undisclosed fee when people click on links on the garments.

And their bizarre excuse for it

Although Google removed Hezbollah and Tamil Tigers-related merchandise, the internet giant refused to take down the IRA shirts because the organisation does not appear on a US list of proscribed terrorist groups.

However the IRA is included on the British Government’s banned list.

A Google spokesman said: ‘While we want Google Shopping to help connect people with advertisers and products, there are certain products that we don’t allow. We have strict advertising policies in place and when we find violations we work quickly to remove them.’

An eBay spokesman said: ‘eBay does not allow the sale of items promoting or commemorating hatred and violence. Items may not be permitted if they contravene this. We have processes and systems in place to find offensive materials and remove them as soon as they are identified. Anyone found to be selling items of this kind will be investigated and face action including account restrictions or suspension.’

How very peculiar that Google refuses to acknowledge publicly that the IRA is a terrorist organisation. It can’t seem to make – or is not willing to make – a simple judgment.

It can’t declare what the whole world knows.

Effectively, the company is saying that just because the IRA does not appear on the official US list, it is not a terrorist group.

Maybe Google needs some help. The company could try talking to the widow of Ian Gow MP, who was murdered in July 1990 outside his home in East Sussex.

When he started his car that morning, it triggered an IRA Semtex bomb that had been planted under the driver’s seat.

Perhaps Google should also try talking to the relatives of the five people killed when Brighton’s Grand Hotel was blown up during the 1984 Tory Party conference.

There are many, many more victims from other atrocities: men, women and children. I could go on and on. The truth is that in facilitating the sale of these T-shirts, Google is insulting the memory of thousands.

This is another example of how internet companies are profiting from encouraging and sympathising with terrorist groups. These companies don’t have any morality; they are only interested in making money.

It underlines the fact that we have to act to ensure they clean up their sites.

It seems impossible to conceive that someone could walk down the street in this country wearing one of these T-shirts – certainly not without risking a smack on the nose.

Perhaps it’s more likely in the US. Either way, it matters not, this trade must stop.

Prime Minister Theresa May has called on companies such as Google and Facebook to remove terrorist material within hours of it being posted online.

Her intervention was well-intentioned but she faces a struggle – not least because Google has proved so difficult to rein in.

All we can do is keep up the pressure on them to act.